A million Muslims are back in Mecca to complete the Hajj, the first mass pilgrimage since Covid. Might investors revisit the Saudi market too, now that its PE multiple is back to the 5-year average?

The tourism sector directly contributes 3.4% of Saudi GDP, on average over 2016-18, and total religious tourists (Hajj and Umrah) could increase by 3x from 2021 just to get back to pre-Covid levels and by 8.5x to get to Vision 2030 targets. 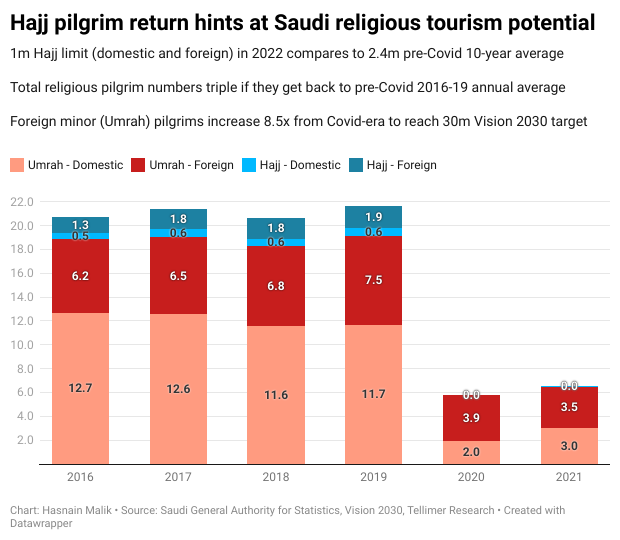 The Saudi equity market price/earnings valuation multiple is back to its 5-year average, compared to the 25% premium it exhibited as recently as the end of March, soon after the Russian invasion of Ukraine.

This has been prompted mainly by investor contagion from declines in global equities and, perhaps for the local investors which still dominate trading, the crypto implosion too, as well as the pull back from peak oil prices. 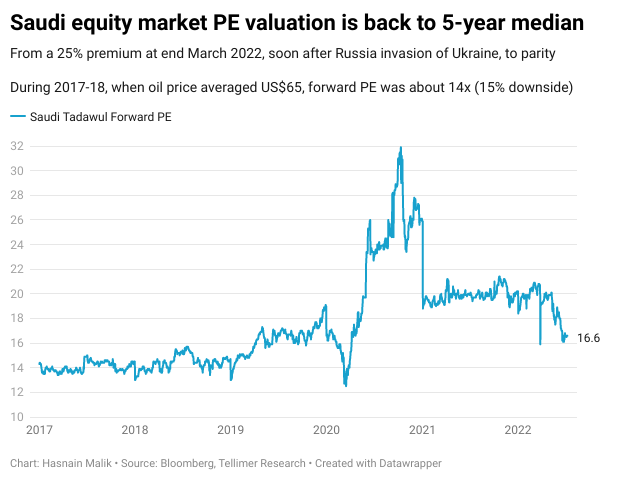 Using a combination of economic exposure to net commodity exports and price/book valuation relative to history, Saudi also looks closer to fair value on this relative, top-down, measure amongst its EM peers. 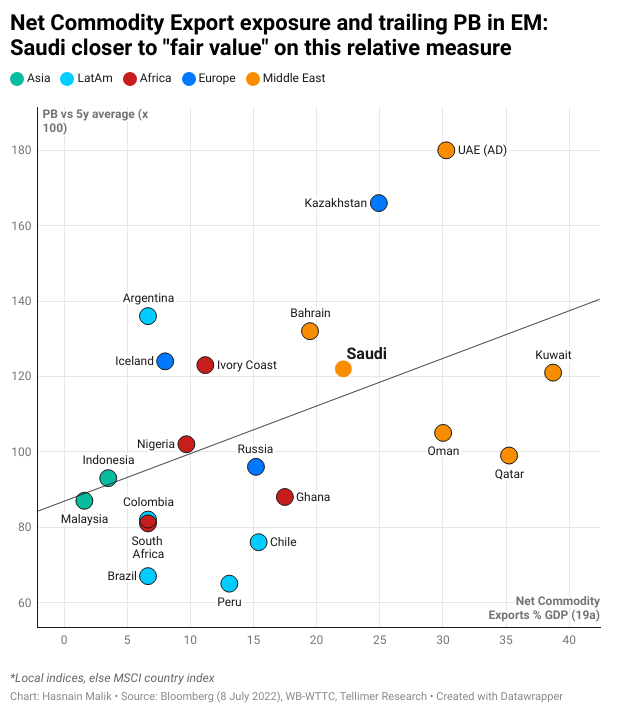 At the individual sector and stock level, where much of the discussion is outside the top-down scope of this report, the valuation comparison is not so favourable. But, for example, in the case of the Banks in Saudi compared with those in South Africa or Brazil, inflation and currency risks are likely much lower in Saudi. 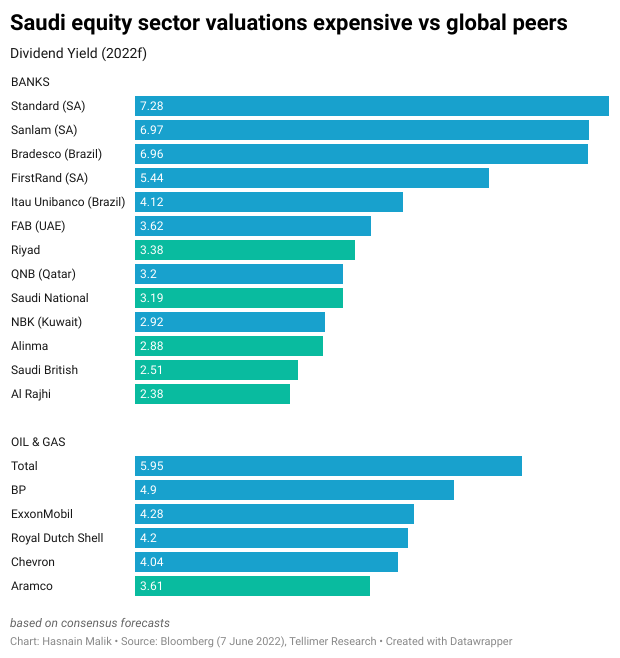 Apart from cheaper valuation, there are a number of fundamental factors in favour of the Saudi investment case:

US relations have clearly improved, from the early days of the Biden administration, as a result of Saudi's spare production capacity and its repaired cooperation with other accessible owner of spare capacity, the UAE. The time when the risk of sanctions was increasing has clearly passed. 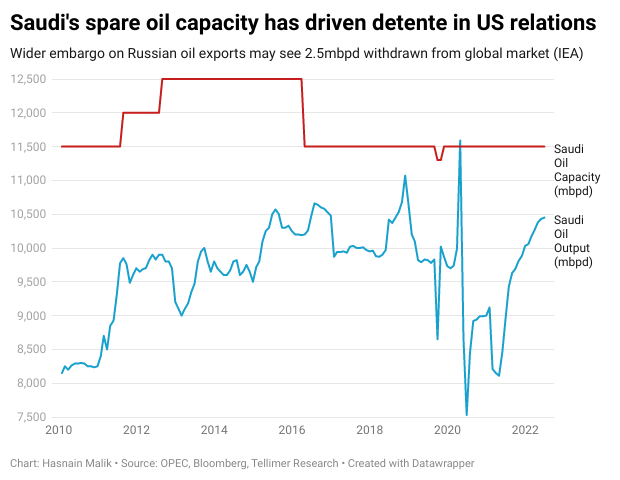 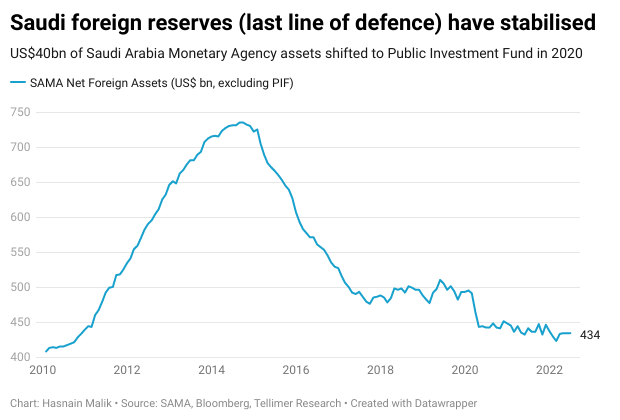 Inflation, a scourge of most peers in emerging and developed markets, appears under control in Saudi, largely due to the persistence of government subsidies, which, in turn, are more affordable with flush sovereign finances. 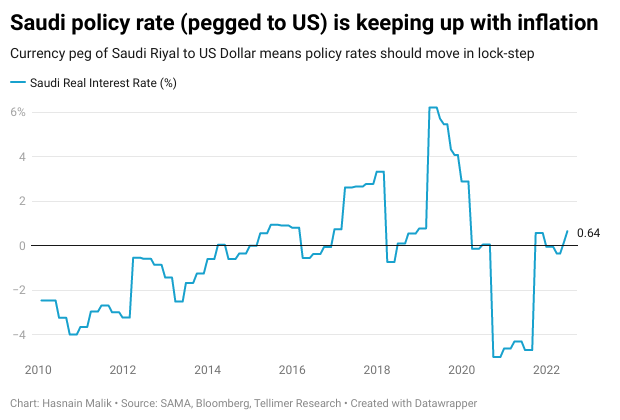 The local liquidity crunch which drove up interbank lending rates to a new peak has likely abated with the injection from the central bank at the end of June. 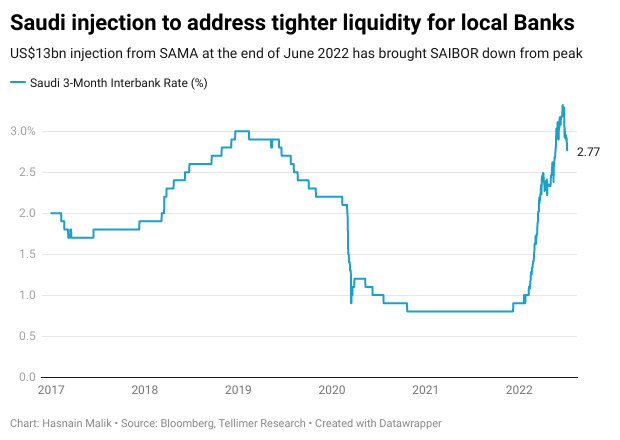 Despite all the seismic changes in Saudi – in terms of the concentration of political power in the office of Crown Prince Muhammad bin Salman, which resolved the perpetual succession risk and should make for much faster decision-making, and the resulting reforms to social behavior, visa and business regulation, capital market liberalisation, privatisation, and non-oil development – some of its most difficult structural challenges remain:

According to the Saudi General Authority for Statistics, youth unemployment for Saudi citizens was 15% in 1Q 2022. This is about half the 25-30% level estimated by the World Bank and International Labour Organisation in the years 2018 to 2020. 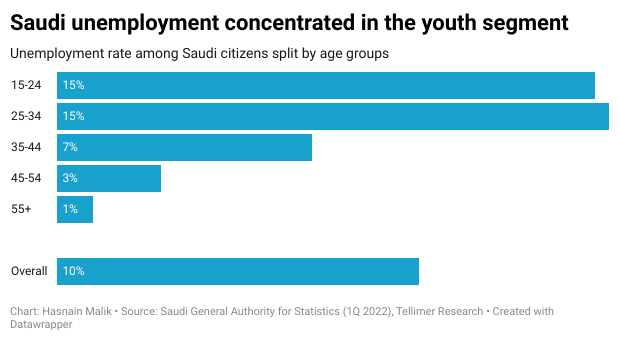 While many of Saudi's domestic economic reforms have been focused on mobilising large investments, eg the funding and propulsion of the Public Investment Fund or the Shareek (private sector partner) programme, what is much harder to fix (ie it takes longer) is persistent low labour and capital productivity.

Low labour productivity requires a shake up of the effectiveness of education and training and the pay and benefits incentives for Saudi citizens, which encourages more to shift into the private sector. And one of the by-products of correctly addressing this by encouraging female labour participation (eg through liberalisation of vehicle driving and guardianship rules) is that the exacerbation of the male youth unemployment problem.

Low capital productivity may be an inescapable constraint of operating in a climate and without the population scale conducive to many activities outside the hydrocarbon and natural resources sector. 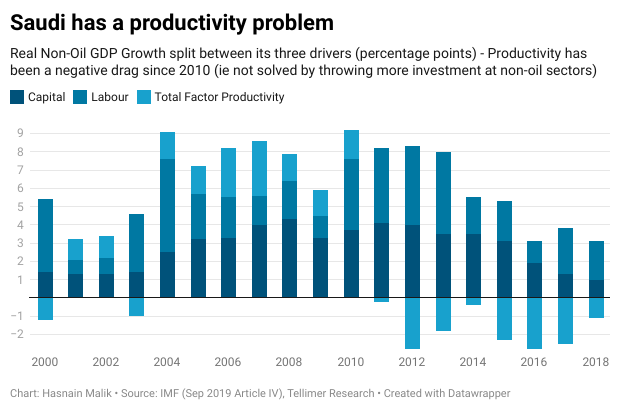 When the Aramco Oil Pipelines sale is stripped out of the 2021 figure, Saudi inward FDI remains below the level seen prior to the launch of the era-defining Vision 2030 document in 2016. The enduring challenge of low productivity may be the best explanation of this. 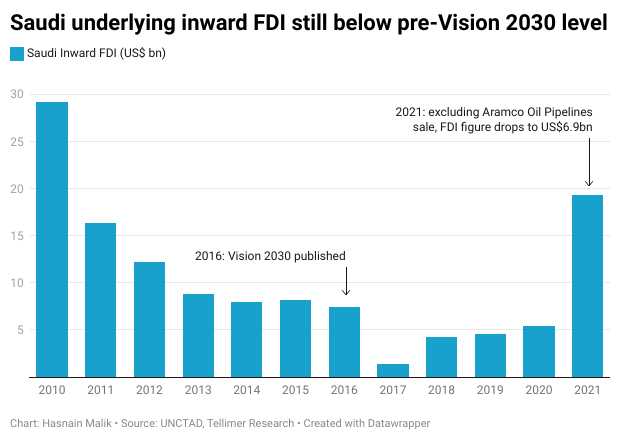 The herculean task of shifting Saudi from an economy reliant on direct oil revenues, the downstream refining of hydrocarbons into products like plastics and fertilizers, the re-investment of oil revenues via the public sector into corporates (eg via PIF) or consumers (via subsidies) is a generational one.

In the interim, oil revenues (in turn, global price and Saudi volume), remain central to the economy and Saudi's geopolitical position.

The removal of Russia from the global emerging market radar, which leaves Saudi as, by far, the most liquidly traded oil exporter equity and debt market, likely reinforces this link in the eyes of the largest EM funds. 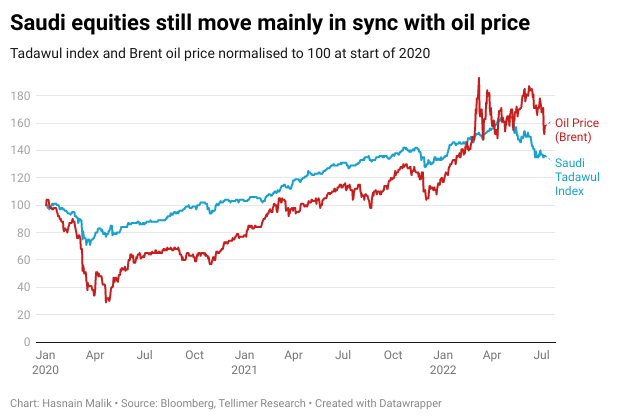 Sportswashing and LIV Golf a warning for EM funds in the ESG era, June 2022