We remain unenthusiastic about Saudi equities at current valuations, given the context of low oil prices (made worse by last week's split with Russia in the OPEC+ discussions), lower US interest rates (which feed through to earnings pressure in the Banks), and regional security risks (elevated after the Aramco attacks).

Four Saudi princes were detained over 5-6 March, according to many press reports (WSJ, NYT, DW, Reuters, Bloomberg). At the time of writing, we have not seen any official statement via the Saudi Press Agency.

We understand that none of these four have held positions in government since the appointment of Crown Prince Muhammad bin Salman in June 2017.

(1a) Ahmed bin Abdulaziz (aged 78): Ahmed is King Salman's younger and last surviving full brother. Salman and Ahmed are the last of the "Sudairi Seven" group of full brothers who, in their lifetimes, have dominated succession (two of them have been King and three of them crown Prince). Ahmed was deputy Interior minister from 1975 to 2012 and the full Interior minister for merely six months afterwards.

(1b) Nayef bin Ahmed: son of Ahmed (1a above), former head of military intelligence after holding positions in the Interior ministry.

(2b) Nawaf bin Nayef, a younger half-brother of Mohammed bin Nayef (2a above) was also detained.

Regime risk is still low: arrests tighten grip over Interior ministry, one of the three armed parts of government

The armed parts of the Saudi government are the Defence ministry, Interior ministry, and National Guard. In our view, while there may be dissent, particularly from disenfranchised royal family members, the risk to the regime is material only if, at least, two or three out of the following conditions are met (and none of these appear to be the case currently in Saudi):

(1) Loss of control of weapons - The control of the armed parts of the government is split and one camp tries to pursue a coup with the weapons at its disposal. This was more of a vulnerability and risk traditionally for Saudi, with leadership of the key security-related ministries - Defence, National Guard, and Interior - in the hands of different branches of the royal family. These arrests appear to wrestle more control over the Interior ministry, given the history of leadership roles the detained princes had in it. MbS has already taken over leadership of the Defence ministry (the formal armed forces, historically dominated by the Sultan branch of the royal family) and oversees the committee into which the National Guard (tribal forces, historically dominated by the Abdullah branch) reports.

(2) International partner's commitment fades - The key external geopolitical partner, the US, determines that the Middle East region is sufficiently important to intervene in decisively and that there is a divergence of regional strategic interests with Saudi (as opposed to non-realpolitik type conflict of supposedly cherished values and ideals) which can be resolved only through a change in Saudi leadership. While shale oil and gas has reduced the US' energy reliance on the region and Saudi, as long as the US identifies Iran as an enemy then the US likely remains committed to those countries which are also positioned against Iran, such as Saudi. And while the Khashoggi Affair has strained relations with the US Congress, it has not apparently done so with the Trump administration.

(3) Mass protests mobilise - Because of a perceived deficit in political freedom, security, or economic welfare, the mass population is discontent enough to agitate for a change in leadership. In Saudi, there is likely dissent from royal family members left disenfranchised by the changes in leadership, decision-making, and patronage since early 2015 (e.g. changes in the line of succession, the Ritz Carlton affair, crackdown on dissenters). But over the same time, the mass population (i.e. those actually capable of amassing and sustaining large-scale protest movements) has seen subsidy cuts targeted at the economic elite more than the mass population (ie industrial utility subsidies have been targeted more than low-income household ones), foreign and security policy messaged in the rhetoric of nationalism and populism (i.e. the social contract has subtly shifted from one where economic welfare is exchanged for political loyalty to one where the provision of security, against internal and external security threats, is exchanged for political loyalty, and partial social liberalisation has started to change the backdrop of daily life.

(4) Disorderly succession take place - In the case of absolute monarchies, confusion over the process of succession can open a window for regime destabilisation. But in the case of Saudi, MbS (aged 34) has already been promoted to Crown Prince. For those who contend that his path to the throne is more secure during the lifetime of his father, ie in the event a healthy King Salman (aged 84) abdicates, then it is worth noting that King reportedly attended official duties as recently as last week (meeting with the UK foreign minister and attending a cabinet meeting, according to the Saudi Press Agency). 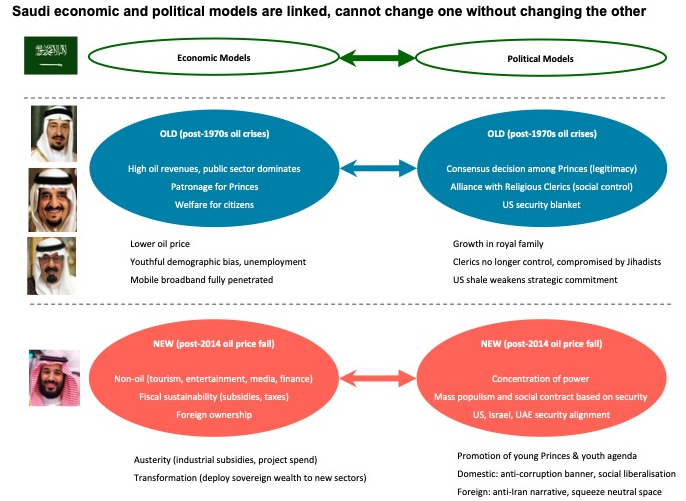 If accurately reported, these actions fit the general pattern of ever-greater concentration of de facto power under Crown Prince Muhammad bin Salman (MbS), following the accession to the throne of his father, King Salman, in January 2015.

In chronological order, MbS was appointed to the following positions in government:

MbS is personally identified with Saudi's highest-profile domestic and foreign policies and events:

In our view, the speed and scale of the economic transformation which Saudi needs to undertake before sovereign wealth resources (driven by oil revenues) deplete requires a similarly stark political transformation. Decision making needs to be faster and the economic patronage network enjoyed by the sprawling royal family needs to be reined in.

This requires moving away from a decision-making model paralysed continually by consensus building among a very large number of individuals and challenging the vested economic interests of an economic elite (e.g. access to cheap land, gas, water, and labour, protection from free-market competition, and low tax benefits).

EM Wars: The changing art and risk of war in Emerging and Frontier markets, 6 March 2020