Investors do not appear overly worried about currencies in the GCC. The performance of the region's equities and sovereign bonds are generally in line or better than oil-exporter peers and broader emerging markets. 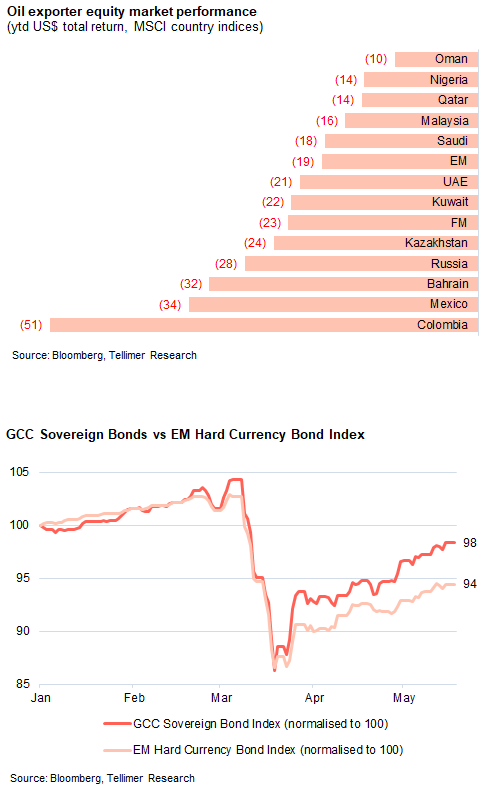 Furthermore, forward exchange rates imply little difference from spot rates, and where there are devaluations implied, their size is minor compared to that seen in 2016 (when, prior to earlier this year, oil price last fell below US$30).

The 5.5% fall seen in Saudi foreign reserves in March to a level not seen since 2011 prompted us to revisit the topic of the GCC currency pegs. 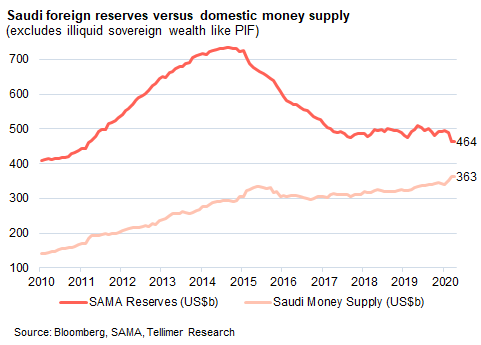 In our view, Saudi and the other GCC governments can sustain their currency pegs, should they wish to use the full extent of foreign reserves and sovereign wealth to do so, for longer than most investment managers can professionally bet against them. However, the capacity to support currency pegs is very uneven with Bahrain much weaker than others, on the measure of foreign reserves relative to money supply, and Bahrain, Oman, and Saudi, weaker than Kuwait, Qatar, and the UAE, on the measure of foreign reserves and sovereign wealth relative to money supply. 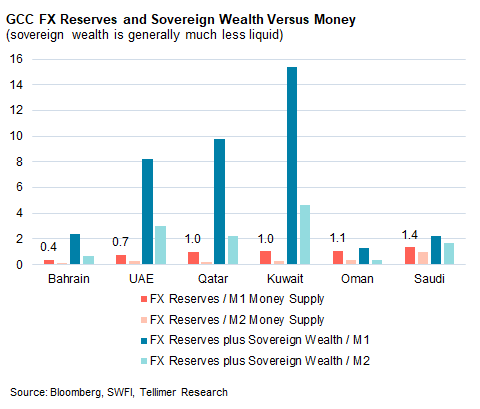 But, as the GCC's priorities change, so does the utility of the currency peg

However, in the short term, the pegs are a contributing factor to crushing economic growth, because fiscal policy (lower government spending, higher taxes, higher sovereign debt) takes on all the burden of adjustment to the twin negative economic shocks of the oil price fall and Covid-19. Given that oil price is unlikely to recover to fiscal breakeven levels and Covid-19 may permanently reduce total population (hysteresis effects from job losses are severe in a population where most of the population is transient, with the expatriate share of population ranging from 38% in Saudi to 87% in Qatar or UAE).

Furthermore, in the longer term, the pegs are no longer in the best interests of a region trying to wean itself off its reliance on hydrocarbons, public sector largesse, citizen welfare and an endless supply of expatriates.

By making imported labour, food items and luxury products more expensive, a currency devaluation would help to drive diversification of government revenue and exports away from hydrocarbons, incentivise the employment of domestic citizens and more sustainable consumption of imported food items, luxury products and utility services.

Currency reform should take place alongside reforms to fiscal policy (streamlining subsidies to non-competitive activities) and supply-side policies (social and education reforms). And the best time to reform currency is when there are sufficient foreign exchange reserves to do it from a position of strength, allowing time for the institutions finally empowered to conduct monetary policy (central banks) to establish their credibility.

In the same way that investors in Saudi and the GCC no longer assume the welfare state survives into perpetuity, they should also consider when, not if, the currency pegs are jettisoned.

De-pegging sooner rather than later and in a coordinated manner would mitigate risk of disorderliness: the VAT precedent concerns us

How orderly this process will be depends on how soon the authorities across the region start the process (ie when their foreign currency reserves are still comfortably high). It also depends on what is the degree of coordination between the six members of the GCC. Is the move synchronised in a planned manner and staggered in an unplanned one (the latter likely prompts fears of contagion even if a clearly weaker peg like the Omani Rial were to break first). Is the new currency regime very different for each country or different flavours of the same one: ie devaluation to a new lower peg, or a move to a currency basket that better represents the spread of the largest trading partners of each country, or a move to a fully flexible currency.

At the moment, the risk is high that de-pegging is put off for too long and occurs in an inconsistent manner; ie ultimately, and this may still be years away, a disorderly disruption looks more likely than an orderly one. The precedent of VAT across the GCC supports this conclusion.

Summary of pros and cons of currency pegs in the GCC Source: Tellimer Research

Footnote: Currency pegs have been in place in the GCC for about four decades

Before most of us were born, the Indian rupee and the Gulf rupee, both linked to British sterling, were used in the Gulf. Between 1978 and 1980, Bahrain, Qatar and the UAE pegged their currencies to the US dollar at rates that persist to the current day. Oman and Saudi established their current pegged rates in 1986. Since the mid-1970s, Kuwait has pegged its currency to a basket (in which the US dollar likely always dominated, with the most recent re-composition of the basket in 2007).

GCC: The Gulf is not a safe haven unless (at least) oil prices recover, 1 April 2020

Oil spat turns into a splat: A reminder of the winners and losers in EM, 21 April 2020

If remittances drop 20% who is exposed in emerging and frontier markets?, 29 April 2020