Saudi: Ambition and obstacles to attracting FDI (and realising Vision 2030)

Saudi Arabia continues to improve the institutional framework for attracting foreign direct investment and portfolio capital; the upgrade of the authority which deals with FDI to a full ministry on 25 February is the latest example.

Reaching the Vision 2030 target of 5.7% FDI to GDP still looks very unlikely, but the direction of change remains positive.

Given low oil price and a market valuation merely in line with the historic average, we remain relatively unenthusiastic about Saudi equities. 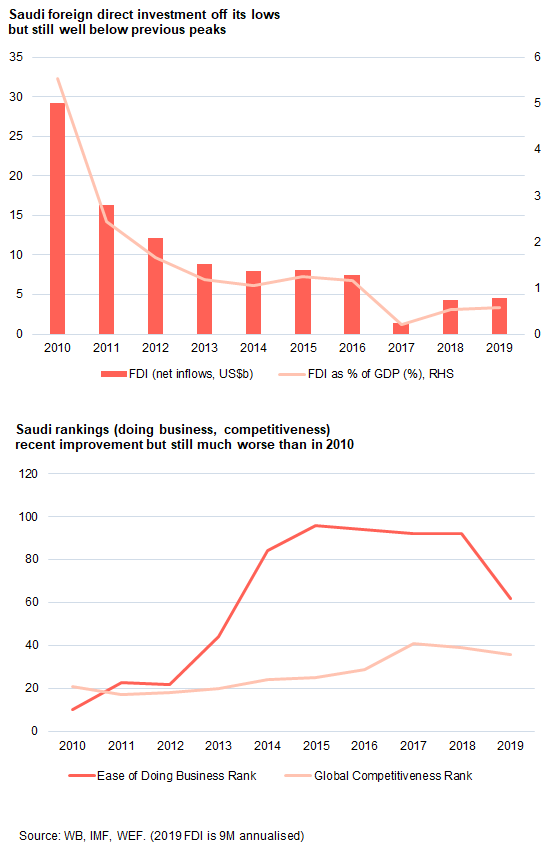 We still regard Vision 2030 as an appropriate recognition that there must be diversification from hydrocarbon-related revenues and the public sector (note the IMF recently repeated its warning on the pressures on sovereign wealth depletion) and the centralisation of power within the government (at the office of the Crown Prince Muhammad bin Salman) improves the prospects of implementation. However, the specific targets in Vision 2030 and associated "Programs" (eg National Transformation, Fiscal Balance, Privatisation) should be viewed as aspirational and setting a direction (and overarching framework) for policy, rather than achievable.

Encouraging FDI is consistent with the Vision 2030 policy framework of Crown Prince Muhammad bin Salman, launched in 2016. Sectors where there is a sustainable competitive advantage (hydrocarbons and petrochemicals) or clear untapped potential (education, leisure, tourism) should be attractive to foreigners.

The Saudi Arabian General Investment Authority has been converted into the new Investment Ministry (under the leadership of Khalid Al Falih, former Energy Minister, Aramco Chairman, Health Minister, Aramco CEO). This should mean its rules carry more weight and it is able to coordinate with other ministries and the larger state-owned enterprises on a more equal footing.

This follows a number of new measures over the last 18 months, such as liberalisation of foreign ownership in new sectors (manpower recruitment, media, land transport, real estate brokerage), the relaxation of the 49% foreign ownership limit for strategic investors in listed companies, and the "Premium Residency" visa category (a pay-for-residency scheme for foreigners).

The impact of the Ritz-Carlton (November 2017) and Khashoggi (October 2018) affairs appears to have dissipated judging by more muted calls for sanctions from members of the US Congress, a recovery in senior foreign corporate representation at the October 2019 Future Investment Initiative, and full attendance at the G20 meeting of finance ministers and central bank heads in February 2020 (which is one of the precursors to the full summit in November 2020).

But other key challenges in attracting much more FDI persist because they are not easily addressed by government policy:

We remain relatively unenthusiastic about Saudi equities in an environment of weak oil prices and pressure for further Saudi output restraint (exacerbating fiscal deficits unless public spending is cut and depressing listed petrochemical companies earnings), very low US rates (which feed into low net interest margins for listed banks), and a market valuation (trailing PB) merely in line with the 5-year median. Saudi equities (Tadawul All Share index) are down 8% ytd. Trailing PB is 1.7x (for merely 8% trailing ROE) and forward PE is 15.5x (for 12% consensus earnings growth).

From a portfolio perspective, among regional peers we see more value (albeit with a fraction of the trading liquidity) in Dubai, Oman or Egypt. Saudi's investment case is, however, more competitive (on the combination of valuation and FX rate risk) among oil exporter peers like Colombia, Kazakhstan, Nigeria, and Russia. 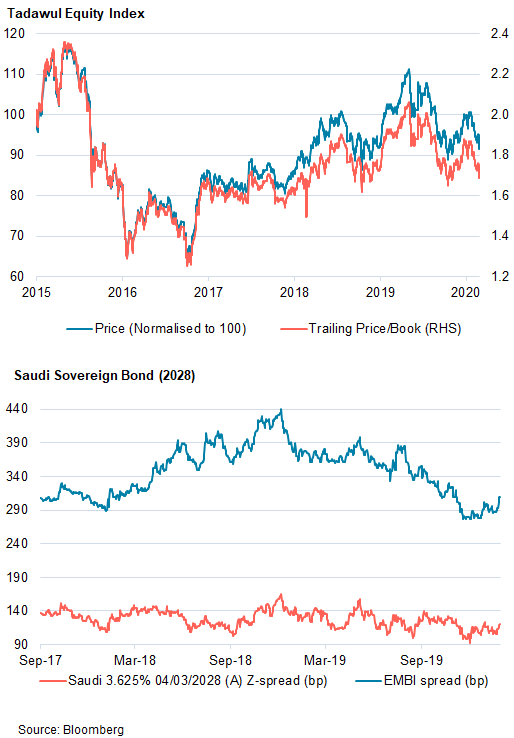