Volatility in the FX market remains elevated as investors continue to digest the ECB’s outsized 50bps rate hike. While the DXY gapped lower at the open, the greenback has reversed its earlier losses to trade relatively flat ahead of the European open. While much of the focus remains squared on the global monetary policy, with the FOMC scheduled to deliver its interest verdict next week, we have a plethora of PMI data out today, which could provide some impetus for global markets. After yesterday’s ECB hike and ahead of the FOMC rate decision, investors will pay particular attention to PMI data out of the Eurozone and US. Emerging market FX meanwhile is mixed this morning, with the gains on the day being led by the ZAR, while the RUB and TRY are trading in the red. Unless there is a significant surprise in the PMI data, we could see FX markets consolidate in the final session of the week as traders take a more cautious stance ahead of the FOMC rate decision next week.

South Africa: The SARB surprised with a 75bp rate hike, affirming its commitment to reining in inflation and inflation expectations. The MPC’s voting pattern was very interesting, with three members voting for a 75bp hike, one for a 50bp hike, and, surprisingly, one member voted for a 100bp move. The outsized hike comes as a result of persistently high price pressures and recent currency depreciation. Moreover, it indicates that the SARB is committed to front-loading its hiking cycle and that price stability remains its main priority.

Egypt: Analysts surveyed in a poll conducted by Reuters forecast the Egyptian economy to grow fairly steadily over the next three years, with inflation gradually declining from double digits and the pound weakening in the near term. GDP is projected to expand by a median of 5.5% in the fiscal year that began this month, up slightly from 5.2% estimated three months ago. The new forecast matches the government's growth target of 5.5%. Growth is expected to ease to 4.9% in the 2023/24 fiscal year and quicken again to 5.4% in 2024/25. Meanwhile, survey respondents forecast inflation to be lower over the next two years, slowing to an average of 10% in the current fiscal year, followed by 10.4% next year. Inflation is expected to fall back to a median of 8% in the 2024/25 fiscal year, within the central bank's target range of 5-9%. The Egyptian pound is expected to be trading at 19.00 to the dollar by the end of the current fiscal year, in June 2023, weakening to 19.86 by June 2024 and 20.00 by June 2025.

Ghana: Lawmakers in Ghana have approved a plan by the government to borrow up to $750mn from the African Export-Import Bank for the 2022 budget. The facility is the first part of the $1bn in loans that the government seeks to obtain this month for the budget. According to a finance committee official, lawmakers are still studying the second part, syndicated loans worth $250mn from other international banks. The loan proceeds are expected to give Ghana room to reduce domestic borrowing, press on with budget projects, and stabilise finances after losing access to the international capital market this year.

Zambia: Finance Minister Situmbeko Musokotwane yesterday expressed optimism that Zambia's creditors would grant the country the debt relief that would unlock the $1.4bn financing from the International Monetary Fund (IMF) it requires. Musokotwane added that the government is hopeful, given they have done everything they needed to do and were awaiting an official debt relief commitment from bilateral creditors. Earlier this week, a report quoting a source familiar with the matter had noted that Zambia's creditors met on Monday and were expected to commit to debt relief this week. Pledges from creditors that bring its debt down to levels the IMF deems sustainable are needed before the lender's board will sign off on the three-year extended credit facility.

Kenya: President Kenyatta revealed that the Kenyan government spent almost $1bn in fuel subsidies to cushion Kenyans from soaring global fuel prices. Specifically, the Kenyan government used $986mn to subsidise fuel prices in the financial year beginning July 2021 through June 2022. While the subsidies have helped soften the blow on citizens, they have come at a massive cost to the fiscus. The government, however plans to eliminate the fuel subsidies by October by gradually continuing to realign domestic to global fuel prices in the current year, according to the IMF.

Nigeria: Data from Nigeria's budget office showed that the country's debt service cost was more than its revenue for the first four months of the year. Nigeria spent NGN 1.94trn servicing outstanding debts in the January to April period, compared with a revenue of NGN 1.63trn for the same period. The revenue missed the government's target by 49%. Federal government oil earnings were at NGN 285bn for the four months to April, 61% below the target, while non-oil revenue was 84% of the set goal. The lower than normal oil revenue was attributed to pipeline vandalism, crude theft, and high gasoline subsidy costs, which the government forecast to cost NGN 6.72trn if not cancelled.

African currencies have broadly come under pressure this year amid challenges ranging from dollar liquidity as global conditions continue to tighten, widening current account deficits, and the negative impact of the war in Ukraine. 15 out of 22 African countries tracked by Bloomberg on a year-to-date basis against the USD are in the red. The Zambian kwacha has, however, bucked this broader weakening trend and been relatively resilient. 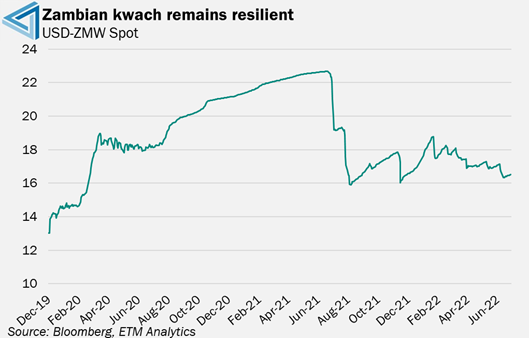 The kwacha is currently ranked as the second best performing African currency against the USD, gaining 0.95% YTD. The resilience of the kwacha has in part been a function of continued central bank intervention. The Bank of Zambia has been a major supplier of forex in the market, ensuring that demand is met. Moreover, greater foreign exchange inflows from the mining sector and positive investor sentiment in the economy, which is set to build further amid rhetoric in recent days that suggest a deal with creditors for debt relief is imminent, have supported the currency.

While the kwacha remains resilient and has rallied by over 27% in the past 12 months, it is worth noting that it is now significantly overvalued on a real effective exchange rate basis. This suggests room for further significant gains may be limited.

Fixed Income: Central banks around the world are following in the hawkish footsteps of the Fed

It is clear that there has been a broad-based shift in global monetary policy, with central banks around the world turning more hawkish as the fight against inflation heats ups. Yesterday saw the European Central Bank deliver a larger than expected 50bps rate hike as concerns about runaway inflation outweigh growth concerns. This marked the first time the ECB has hiked interest rates in more than a decade. This was followed up by an outsized interest rate hike in South Africa with policymakers voting in favour of a 75bps hike. We also had the Central Bank of Nigeria hike its benchmark interest rate by 100bps this week, while the Bank of Mozambique left rates on hold after hiking aggressively over the past 16 months. 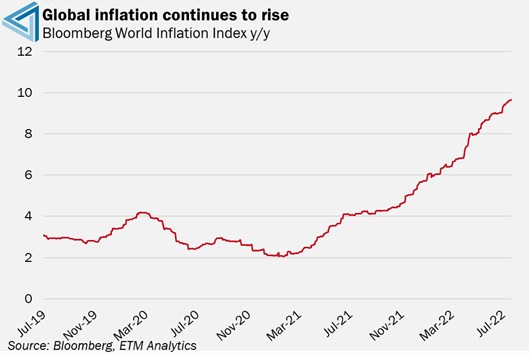 This week’s rate hikes, in addition to the hawkish guidance from the Fed, set the stage for a week full of rate decisions across Africa. Policymakers in Ghana, Kenya and Angola are set to deliver their respective interest verdicts next week. While the interest rate outlooks for these three countries differ, one thing in common is that their central banks are turning more hawkish as inflation pressures persist, currency weakness intensifies and as not to get left behind the US in its policy tightening. Bloomberg’s World Economy Weighted Inflation Index shows that global inflation pressures are still building, with the index buoyed at 9.65% y/y. There is little sign that the topside trend is losing momentum.

While we expect inflation pressures to remain robust in the months ahead, it is worth pointing out that the high base effects will come into play in Q1 2023. Moreover, the impact of tighter monetary conditions will begin to take hold, which suggests that inflation pressures should moderate next year. As such, while headwinds for bonds are likely to persist in the near term, we could see pressures abate towards the back end of the year and into next year as inflation risks temper and central banks tone down their hawkishness.

Egypt continues to run a wide trade deficit as the country feels the impacts of high global commodity prices. Egypt is a net importer with the country running a net trade deficit for more than a decade now. For context, Egypt’s trade deficit widened to -$2.6bn in May from -$1.7bn in April. 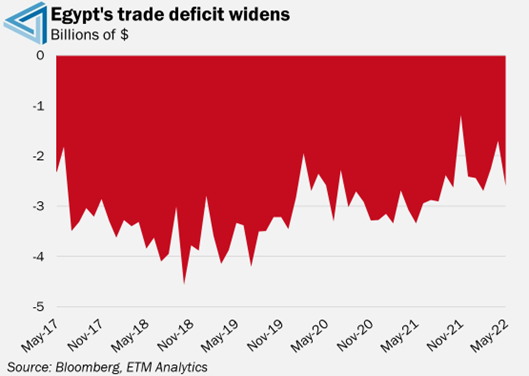 Details from the statistics agency showed that the widening in the trade deficit in May was a function of a marked decrease in exports, which fell by -18.7% when compared to the previous month to $4.01bn. Imports meanwhile were down by just -0.3% in May to $6.62bn. Underpinning the import side of the equation are elevated wheat prices buoyed by supply concerns over Russia and Ukraine and still solid domestic demand.

From a currency perspective, Egypt’s weak trade dynamics continue to detract from the Egyptian pound’s resilience. Negative trade dynamics adversely impact the country’s current account, which is effectively a country’s balance of payments and explains a large component of supply/demand for a currency.

Following the adverse impact of the Ukraine war on Egypt’s trade account as import prices surged, we saw the Central Bank of Egypt devalue the pound by some 15% against the USD. Therefore, should the negative trade dynamics persist, we could see pressure on the currency mount, increasing the risk of another sizeable devaluation in the EGP down the line.