Safaricom in Ethiopia: Not as lucrative as the market believes

Excitement filled the air after the Ethiopian government announced the winner of its telecom licence auction. The share price of Safaricom has rallied by over 7% in the past 12 days as investors anticipate what the successful bid could mean for the future growth and profitability of the Kenyan telco giant.

In this report, we highlight our preliminary thoughts regarding the Ethiopian opportunity. We expect further clarity when Safaricom management presents to investors next week, and may adjust our view accordingly. 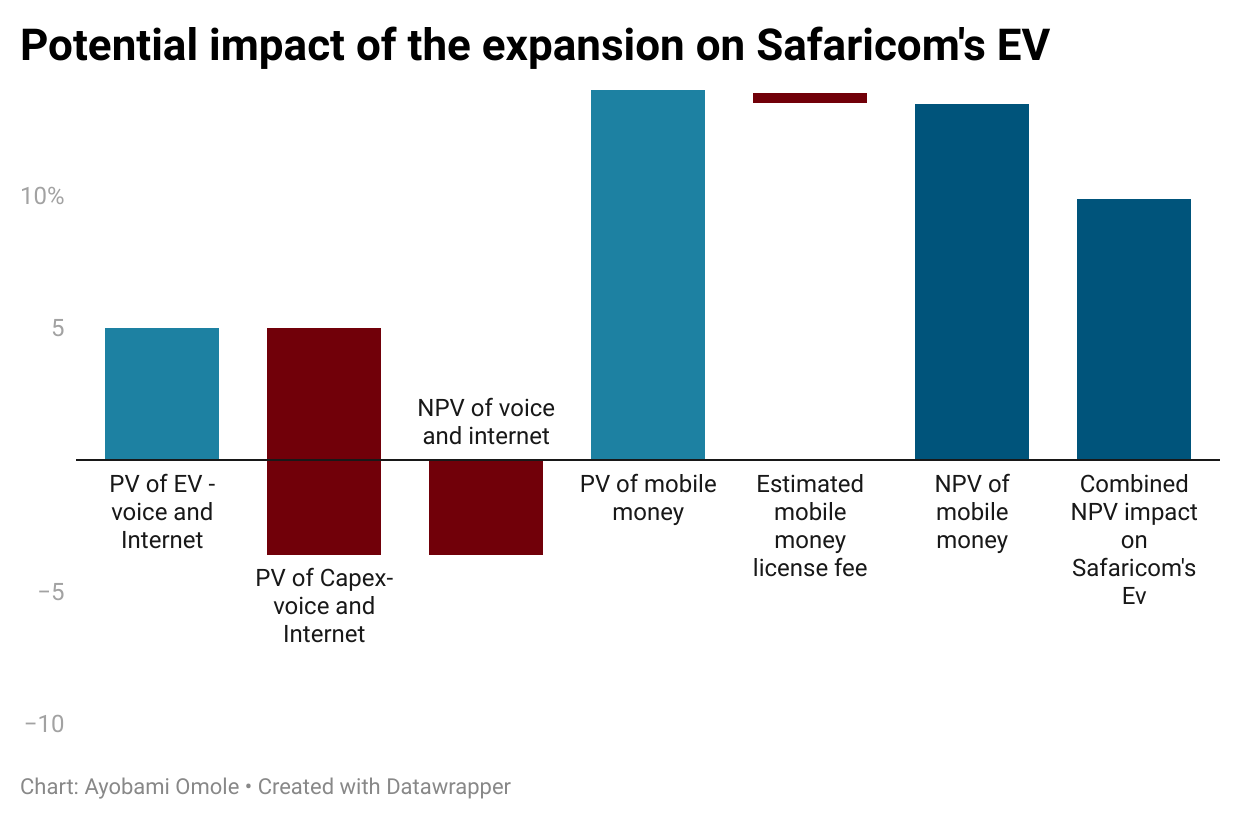 To privatise its telecommunication sector,  the Ethiopian government held an auction for two nationwide telco licences in April this year. Despite an initial show of interest by numerous international parties, only two bids were actually presented, one from a Safaricom-led consortium and another from an MTN-led consortium.

On 22 May, the Ethiopian Ministry of Finance and the Ethiopian Communications Authority announced that the Safaricom-led consortium’s bid of US$850mn had been accepted. The issued licence is valid for 15 years and will need to be renewed upon expiry.

In contrast, the Ethiopian authority considered MTN’s US$600mn bid too small and has indicated that the bidding process for the remaining licence will be reopened at a later, undisclosed, time.

The Global Partnership for Ethiopia (GPE)

The Safaricom-led consortium, named the Global Partnership for Ethiopia, consists of Safaricom, Vodacom, Vodafone (through its affiliation with Safaricom and Vodacom), the UK’s CDC Group and Japan’s Sumitomo Corporation. 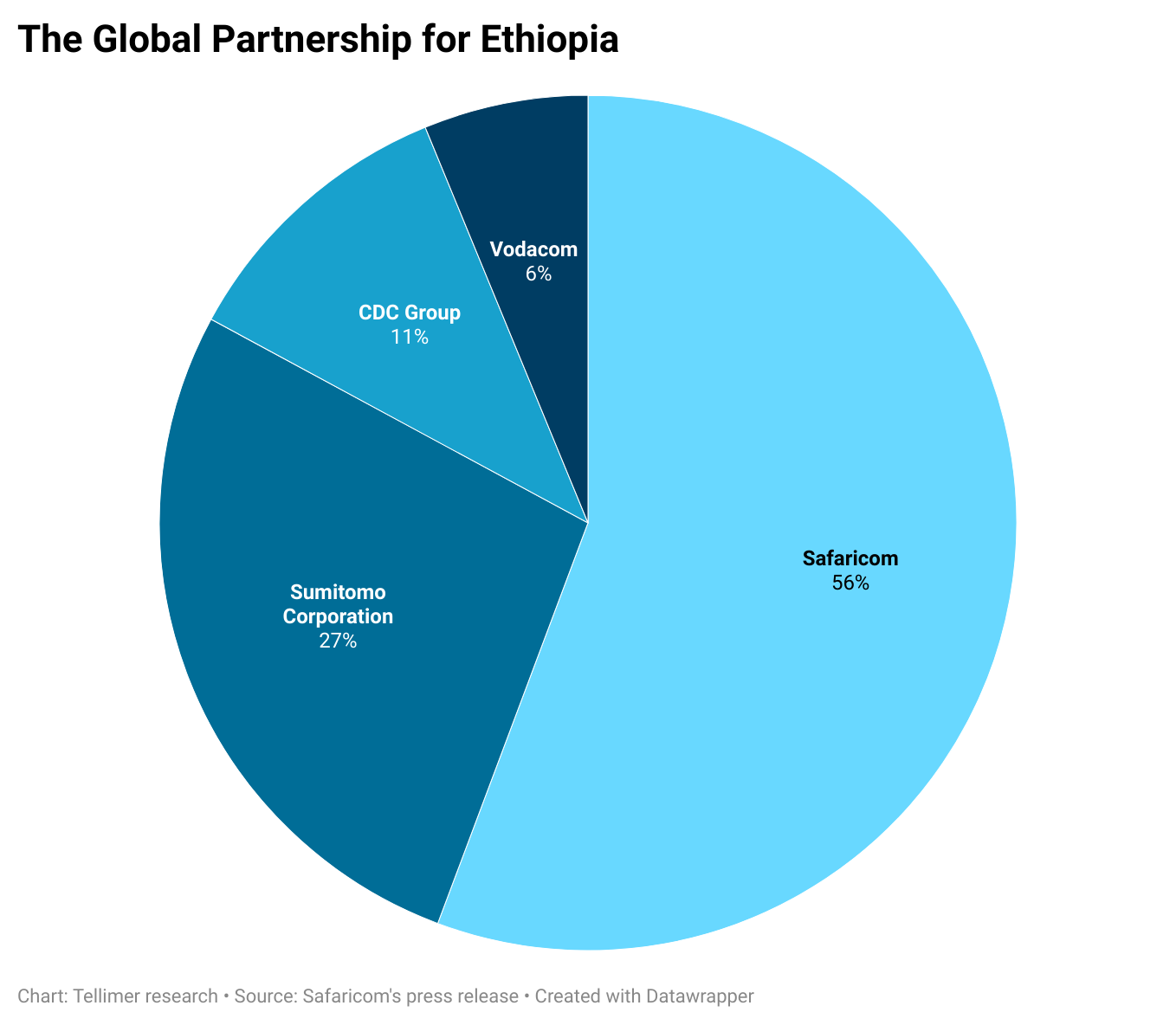 Safaricom’s proximity to Ethiopia and strong track record supported its decision to lead the consortium. In December 2020, the US’s International Development Finance Corporation approved a US$500mn credit line to GPE to finance the acquisition of the mobile licence. However, that credit line might be under threat given US sanctions against Ethiopia.

GPE aims to start operations in 2022 and is already making arrangements to set up the operating company in Ethiopia. The Ethiopian finance minister expects US$8.5bn of foreign direct investment from the group over the next 10 years.

A very important question for the investment case is whether GPE will be allowed to participate in mobile money in Ethiopia. Mobile money is an emerging and strong driver of revenue and profit for African telcos. For example, M-PESA made up 33% of Safaricom’s revenue in the recent financial year.

Ethiopia's authorities have initially shown strong opposition to the possibility of international operators participating in mobile money. The Prime Minister of Ethiopia, at the May launch of Ethio Telecom's mobile money services (known as Telebirr), said that the ban on rival operators will be lifted after about a year – to give Telebirr a significant first-mover advantage. Telebirr has hit 1mn users in less than a week and is targeting 21mn users within a year.

Conservatively, we can expect other firms will participate in mobile money in Ethiopia within 2-3 years. However, GPE’s telco licence does not include mobile money services. As such, GPE will most likely have to bid for a mobile money licence separately.

The winning bid: cheap or expensive?

GPE has been determined to break into the Ethiopian market ever since there was an indication that the telecoms sector would become open to competition. Although GPE’s financial bid was lower than the initial US$1bn expectation, it was still 40% higher than that of the MTN-led consortium.

Safaricom likely deemed the opportunity to be more attractive than its counterpart for three key reasons:

What could GPE’s Ethiopian operations look like in 10 years’ time?

Ethiopia lags its regional peers significantly in terms of mobile and internet penetration. With the momentum that privatisation could provide to the sector, we expect substantial improvement is possible. As such, we base our forecasts on a scenario where key metrics in the next 10 years converge to where Nigeria, South Africa, Ghana, Kenya and Egypt stand today, on average. 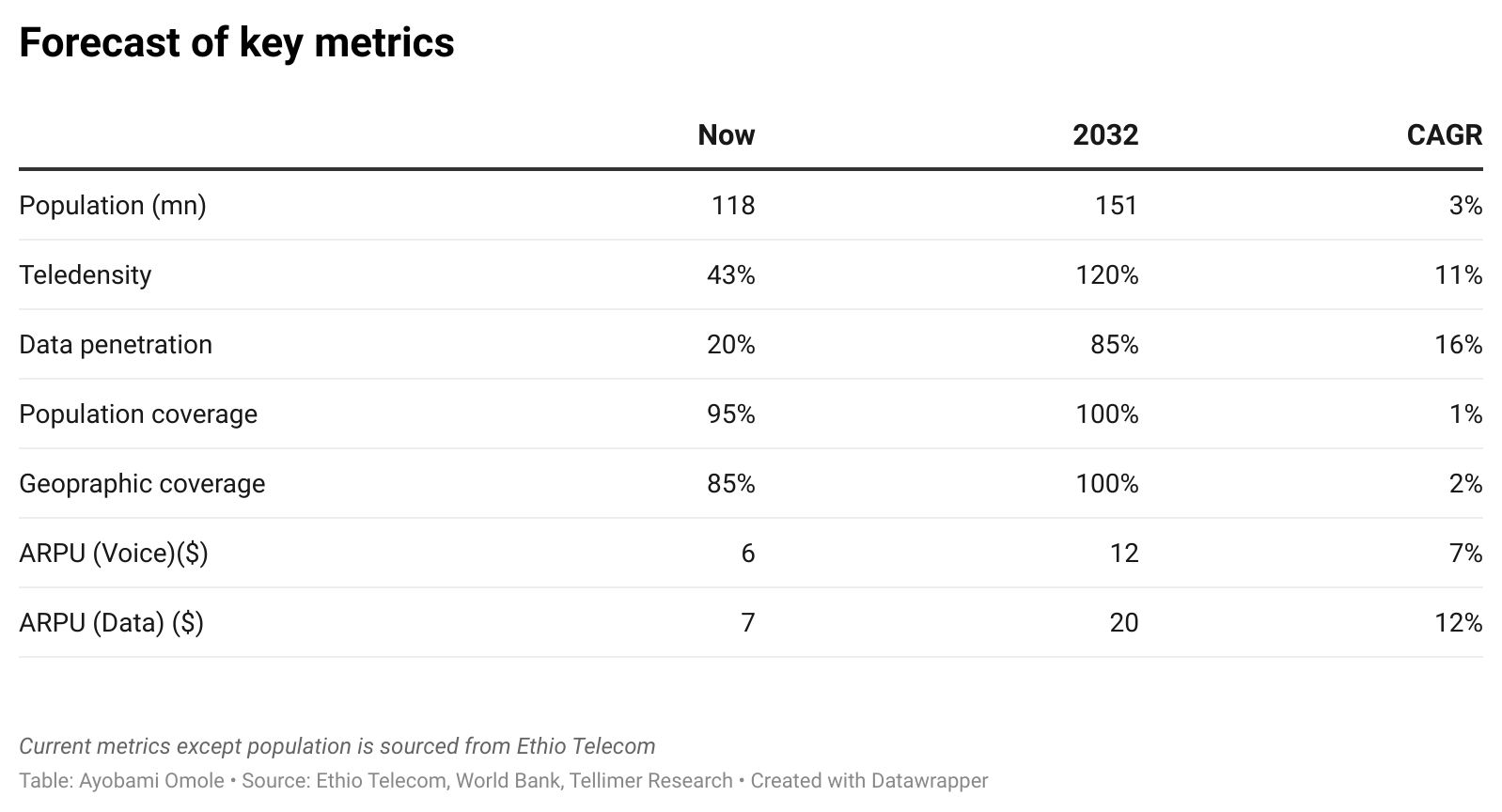 Assuming that the GPE consortium is able to take a 45% share of the market implies revenues of US$2.5bn in 2032. Applying a 50% EBITDA margin (in line with Safaricom’s 5-year average for this ratio) implies US$1.2bn for this metric.

From a valuation perspective, we make a few other simplifying assumptions. We apply a 6.0x EV/ EBITDA terminal multiple to the 2032 figure highlighted above, in line with where large African telcos trade today, and we discount this figure back at a WACC of 18% (versus the 15.2% WACC we use for Safaricom’s Kenyan operations).

We also assume a straight-line progression in EBITDA from today until 2032, an annual capex of US$850mn per annum over the next 10 years and the immediate US$850mn licence fee, in line with the foreign minister’s previous comments.

Our key assumptions are that the value of GPE’s mobile money business in 10 years’ time is twice the value of Kenya’s M-PESA operations today (which we estimate to be US$9.7bn). In 10 years, Ethiopia’s population is likely to be over 150mn, ie 3x Kenya’s current population.

We assume no net positive cashflows for the mobile money business over the coming decade (investment will need to be made to build technology infrastructure, to grow the agent and merchant networks, as well as marketing to encourage consumers to sign up). We also assume GPE pays US$100mn to secure its mobile money licence.

Based on these assumptions, we estimate the NPV of GPE’s Ethiopian mobile money operations at US$3.6bn, with Safaricom’s share coming in at US$1.5bn, which is equivalent to c13% of its current enterprise value.

Therefore, it seems to us that recent share price strength is already factoring in a successful mobile money award and subsequent domination of the mobile money space by GPE.

We highlight below some of our most important assumptions and the impact on Safaricom’s enterprise value if these assumptions are flexed. 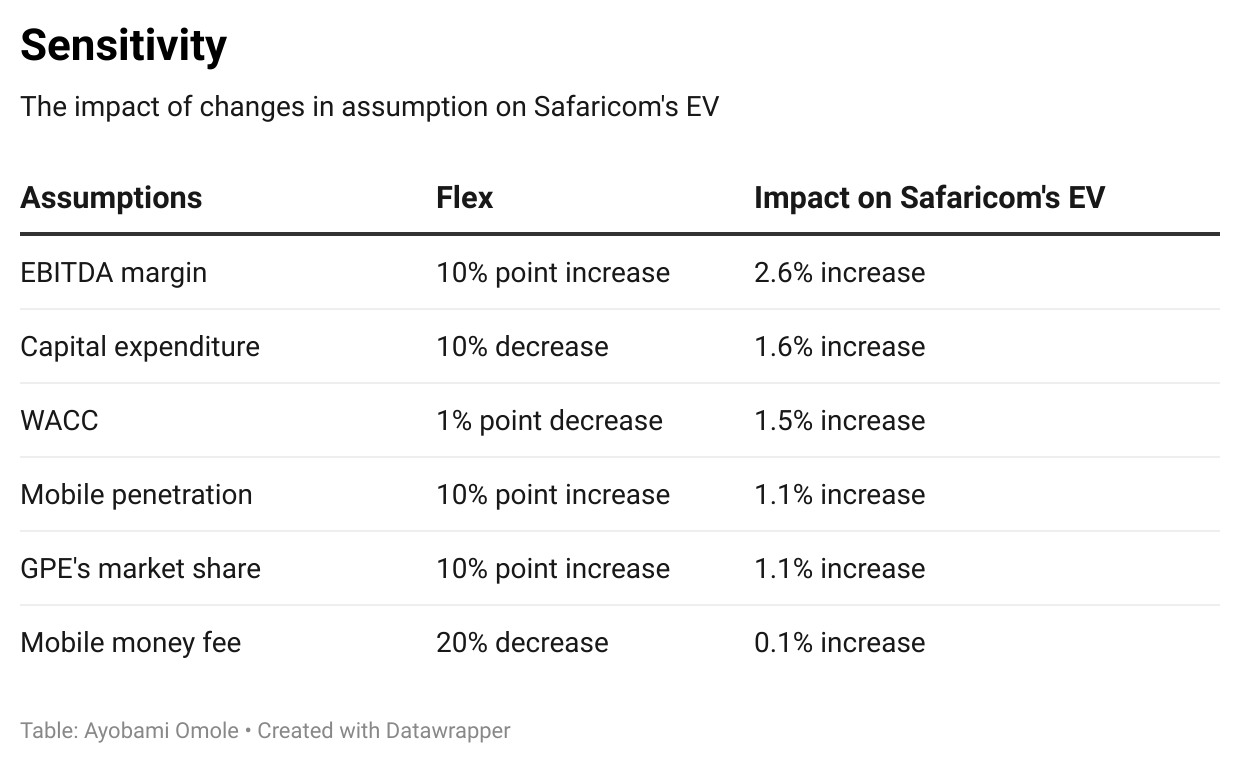 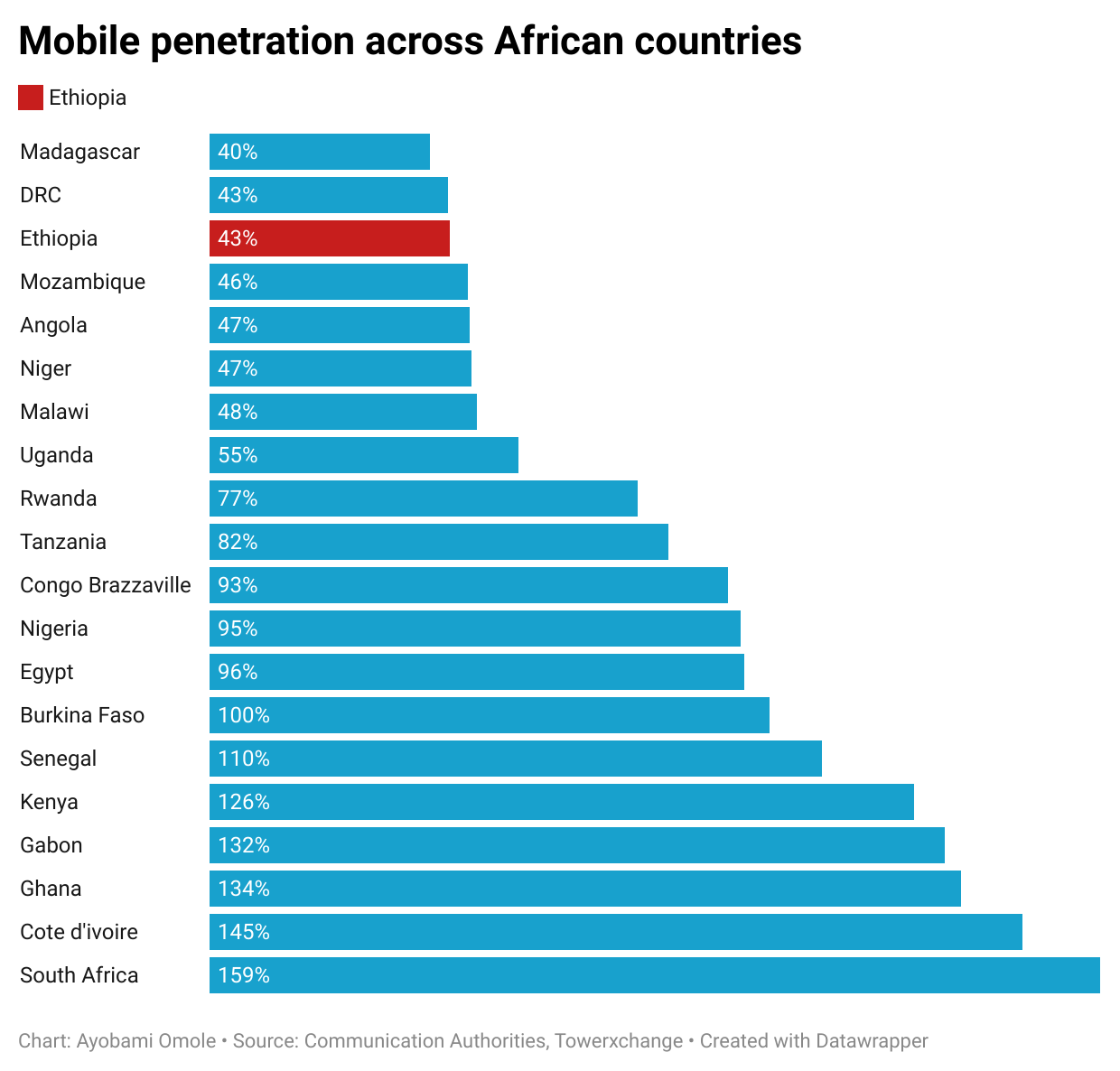