SA Reserve Bank is next up to deliver its rate verdict, Egyptian stocks surge

Fed minutes have placed the USD on the defensive and plumbing the lows tested earlier this month. It is difficult seeing any currency offsetting the USD’s slide, so there will be some relief expressed by many countries when they see their currencies appreciate vs the USD. It helps ease inflationary pressures and suggests that the more conservative policies they have adopted will pay dividends in protecting the purchasing power of their currency. The EUR has surged back above 1.0430, while the GBP is trading back towards 1.2100/dlr. Even the JPY has now managed to trade to levels back below 139.00/dlr, and with the USD expected to slide further, currencies are looking to end the year on a much stronger footing. Technically, a break below 105.00 on the trade-weighted USD index opens the door for a further 5% retreat in the USD to unwind more of its overvaluation. The US Thanksgiving holidays will leave investors to consider the Fed minutes carefully, and it is unlikely that the USD will make much of a comeback unless Black Friday is a blow-out success.

South Africa: There is significant two-way risk heading into today's SARB MPC meeting with economists and traders divided on the magnitude of the SARB's rate hike. The SARB's policy trajectory is inextricably linked to those of the Fed and other major central banks and given recent intimations that the end of the global rate hike cycle is drawing nearer, the SARB may well consider moving to smaller increments slightly ahead of the curve to avoid incurring unnecessary damage to the South African economy. We, therefore, foresee a vote split 3-2 in favour of the 50bp hike, with such an outcome likely to be used as a guide in monetary policy going forward and also offers the  SARB room to manoeuvre in case inflation expectations rise again. That said, there is considerable risk that the SARB does deliver a 75bps hike.

Egypt: Official data from the Central Bank of Egypt showed that Egypt's total external debt as a % of GDP provisionally declined to 32.6% in Q4 (April-June) FY 2021/22, down from 33% in the same quarter the previous year. The dip in Egypt's overall external debt to $155bn, down by $2.1bn during the Q4 2021/22, was largely caused by a drop in the repurchase of securities issued by Egyptian entities in foreign currencies, which plunged by $3.2bn to $1.5bn in Q4 FY2021/22. The fall was partly mitigated by a $2.4bn rise in supplier credits extended by foreign firms to Egyptian buyers, which grew to $19bn.

Kenya: The United Nations is seeking $472.6mn to support Kenya's efforts in dealing with the impact of the worst drought the country has faced in decades. According to the UN, the fund will help alleviate the suffering of around 4.3mn people who are among the 5.8mn in Kenya's arid and semi-arid areas. The UN expects the situation to likely worsen as the country faces a fifth consecutive below-average rain season from October to December. Forecasts indicate the possibility of a sixth poor rainfall from March to May.

Kenya: South Korea's finance ministry yesterday announced that it plans to raise the ceiling of its low-interest rate loans to Kenya to $1bn to support the country's infrastructure projects. According to the ministry, South Korea and Kenya have inked an agreement to raise the limit of the Economic Development Cooperation Fund (EDCF) in 2022-2026 from the previous $300mn for 2018-2020. The ministry added that South Korea wishes to expand bilateral cooperation with Kenya, especially in the energy, digital, and other high-value-added infrastructure.

Uganda: Ugandan lawmakers have approved a request for government to borrow up to $331.5mn from the International Development Association of the World Bank Group, upon which it will obtain a grant worth $276.5mn. The loan is for financing Electricity Access Scale-Up Project (EASP), which aims to increase electricity countrywide. This month, lawmakers already approved for the government to borrow $464mn in syndicated loans, and reports suggest that Uganda is seeking EUR 500mn in additional loans for the budget gap. The continued borrowing by the Ugandan government is likely to stoke concern over Uganda's ability to repay its rapidly expanding debt.

Uganda: An official at the Uganda National Oil Co. has said that Uganda sees the financial close for oil pipelines within weeks. According to the official, the majority of the prospective lenders for a $4bn crude export link have confirmed their pledges, and Uganda expects to attain financial closure in the "coming weeks or months." A swift financial close would boost the country's target to start oil production in 2025. Without providing further details, the official said that the prospective lenders for the 1,443km pipeline are largely from Europe, Asia, and Africa. The pipeline will be funded on a 40%-60% equity-debt ratio."

Oil: Oil markets are holding onto yesterday’s declines this morning, with focus still on the EU’s proposed price cap on Russian oil and what that could mean for the markets. Brent is trading near $85 per barrel as officials have reportedly discussed a price cap of between $65 to $70 per barrel, higher than what many had expected. If such a level is implemented, it will have minimal consequences on the market, given that Russian Urals crude is already selling at a deep discount to European benchmark crude. Oil supply to Europe, therefore, will likely remain largely unaffected, and the risk premium baked into the market ahead of the announcement could be unwound.

After Egypt devalued its currency for a second time this year and agreed to a $3bn deal with the International Monetary Fund last month, Egyptian stocks have gone on a bullish run. The moves have given investors more confidence to capitalize on cheaper shares. The benchmark EGX 30 index has posted a run of weekly gains since the pound was devalued in October. Egypt’s bourse has soared more than 47% in local currency terms and has been the best-performing stock market globally since last month's devaluation. 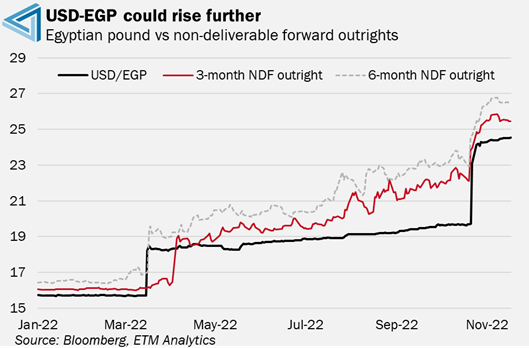 Egypt has faced a surging import bill and an exodus of money due to the fallout from the war in Ukraine. However, agreements with the IMF and other international partners to help finance Egypt's external funding gap has fuelled investor confidence in the country's stocks. Aside from supporting the stock market, the recent devaluation of the pound is set to help unwind Egypt's external imbalances, boost competitiveness and attract foreign direct investment.

Given that the Central Bank of Egypt announced a move to a more flexible exchange rate system, it is worth noting that the market is still pricing in further pound weakness. Although off their recent record highs, the non-deliverable forward tenors are pricing in for further weakness. The pound is expected to weaken by almost 8% in the next six months. Greater currency flexibility remains key for Egypt to avoid another build-up of imbalances. It, however, remains to be seen how much flexibility authorities will allow.

The Central Bank of Kenya is the latest African central bank to hike interest rates. In line with expectations, the CBK raised its Central Bank Rate (CBR) by 50bps to 8.75%. Yesterday’s policy move brought Kenya’s combined rate hikes for the year to 175bps and put the policy rate back at pre-pandemic levels. The rhetoric used in the policy statement was relatively hawkish, with the central bank reiterating that it stands ready to take additional measures as necessary. 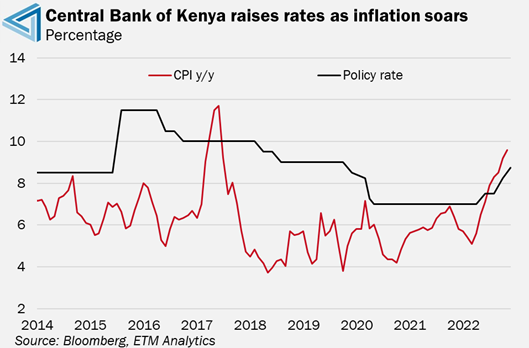 The Committee said in its policy statement that given the sustained inflationary pressures, elevated global risks and their potential impact on the domestic economy, there was scope for further tightening in order to anchor inflation expectations. While the central bank noted that reserves remain adequate to provide cover and a buffer against any short-term shocks in the FX market, the derivatives market implies that the bearish bias in the shilling will persist in the months ahead.

While yesterday’s rate hike will help ease inflation and inflation expectations in the months ahead, we still assess risks to the inflation outlook to be skewed to the upside. As such, we will likely see additional rate hikes in the months ahead. Interestingly, despite yesterday’s rate hike, yields on the front end of the local currency bond curve have traded lower this month, supported by improved sentiment. Kenya’s 2025 local currency bond yield is down more than 40bps this month. Meanwhile, movements on the long end of the curve have been less pronounced, with markets still pricing in a significant fiscal premium.

Macroeconomic: Zambia is among the few countries that have kept rates unchanged

While most major African central banks have continued to hike rates, the Bank of Zambia opted to leave rates on hold on Wednesday. According to the policy statement, the decision to leave the Policy Rate at 9.00% was underpinned by the projected continued downward trend in inflation and its eventual return to the 6-8% target range in the first quarter of 2024. This is the longest holding streak since 2013. 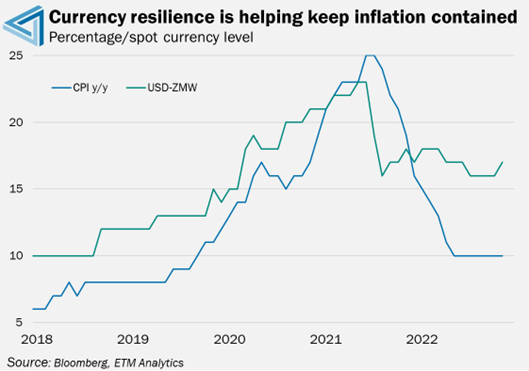 The downward trend in inflation has been a function of the strength in kwacha, which has helped keep supply-side price pressures contained. Since this time last year, the ZMW has appreciated by around 5.70% against the USD, making it one of the best-performing African currencies. The strength in the ZMW has been driven by improved market sentiment following the election of Hichilema as president and optimism surrounding the IMF deal and its impact on the economy and Zambia’s fiscal dynamics.

Going forward, dollar weakness which is expected in 2023, should provide additional support for the ZMW in the months ahead. Expectations for sustained currency strength and the high base effects of 2022 suggest that inflation pressures should be contained next year. Therefore, as inflation continues to ease, the BoZ will likely keep rates unchanged and potentially consider cutting rates later in 2023.