Russia's TMK is back with a new bond

TMK, a Russian steel pipe producer catering to the needs of the oil and gas industry, is looking to issue a benchmark US$-denominated bond. The purpose of the transaction is to refinance its short-term debt, including the US$500mn of bonds due April. The company is well known to investors through its previous transactions.

We expect the new TRUBRU issue to price at the lower end of the range of Russian single 'B'-rated bonds, with the issue of a close industry peer, Chelpipe (CHEPRU 4.5% 2024), serving as a benchmark. We think TRUBRU’s improving credit profile and the likely redemption of up to cUS$1bn of its debt, which could increase its headroom under existing bank risk limits, will result in tight pricing for the new issue, with YTM in the area of 4%.

A leading steel pipe producer, with FY 19 output of 2.6mt (from its continuing operations)

The oil and gas industry consumes c80% of TMK’s pipes, with most Russian O&G majors buying from the company. On the revenue side, this exposes TMK to the capex programmes of those oil and gas companies, which depend on crude oil prices and particular infrastructure projects. TMK’s costs are linked to steel prices, as the company uses hot briquetted iron and steel billets to make its pipes.

In 2019, TMK agreed to sell its North American subsidiary, IPSCO Tubulars, to Tenaris for US$1.2bn. It plans to use the proceeds from the sale to deleverage its balance sheet.

TMK is a London-listed company with current market cap of US$883mn. Its majority shareholder, Dmitry Pumpyansky, controls 65% of the voting stock.

In 9M 19, TMK reported US$2.9mn in revenues from its continuing operations (ex. IPSCO Tubular), US$454mn in EBITDA and an EBITDA margin of 16%. Based on the reported numbers, TMK’s net leverage was at 4x in Q3 19. Calculated on a pro-forma basis after adjusting EBITDA for the share of IPSCO and reducing debt by the US$1.2bn proceeds from sale of the subsidiary, we estimate net leverage at 2.6x. High leverage has been a distinctive feature of TMK since the acquisition of IPSCO Tubulars in 2008. Its sale should finally pave the way to deleveraging.

TMK somewhat is bigger in terms of production and revenues than Chelpipe. We estimate that, on a pro-forma basis, the companies' profitability as measured by EBITDA margins were on par.

Operationally, TMK is focused mainly on OCTG pipes used in drilling and well maintenance, while Chelpipe relies on large diameter pipes used in trunk pipelines. Having said that, despite different product mixes, both companies have high exposure to the oil and gas sector.

On the funding side, TMK used to be more leveraged than Chelpipe; however, this is set to change once the proceeds from the sale of IPSCO are used repay its debt.

TMK’s debt is front-loaded, with c40% falling due in 2020 and another 30% in 2021, while Chelpipe has moderate annual maturities until 2024. That being said, we do not expect TMK to have any problems with refinancing.

We expect both companies to have net leverage in the range of 2.5-3x. S&P recently upgraded TMK to BB- (stable outlook). 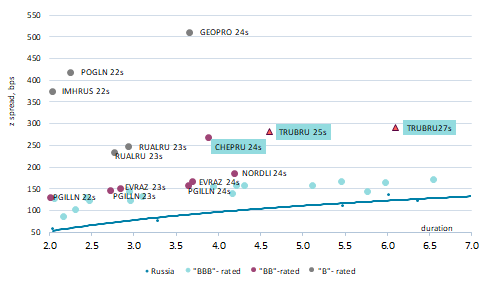