Russia wakes up to sovereign default

Russia has reportedly finally fallen into default on its foreign debt today, barring a last-minute surprise, as the 30-day grace period for coupons on two sovereign bonds (US$ '26s and EUR '36s) that were due on 27 May expired on 26 June (Sunday) without payments being received by bondholders due to their being blocked by sanctions. The coupons amount to a combined amount of cUS$90mn (equivalent). Default comes despite Russia still having sufficient resources and the ability to pay.

According to reports, Russia transferred the funds to its local paying agent, the National Settlement Depository (NSD), the week before the coupons were due. NSD would then remit the funds to Euroclear. However, international sanctions now seem to prohibit transfers from NSD out of the country while US sanctions prevent US persons from receiving payment after the US Treasury allowed a sanctions loophole to expire on 25 May. Hence, unlike previous payments over March-April, which were made, these payment seems stuck somewhere in the payment chain.

Russia has instead also sought to pay foreign currency bonds in rubles if it cannot pay in the contracted currency, with an “alternative payment currency” allowable under the prospectus for certain international bonds (those issued since 2018), although this requires a special local account and may still not be acceptable to bondholders. We understand rubles may be permitted under the '36s but not the '26s.

However, Russia is looking to make these payments in rubles too after President Putin approved new regulations earlier in the week under which foreign currency debt payments would be deemed fulfilled once it has transferred rubles to the NSD. Ruble payments, though, are not permitted under the prospectuses for either the '27s and '47s. Hence, this would constitute a default, whatever the local rules say, although we might have to wait for the end of the 30-day grace period to be sure. In any case, Russia might have already fallen into default by then.

The bonds already in deeply distressed territory, with prices indicated in the 20s on the dollar bonds, so default is largely symbolic. Russia will, of course, protest that it has paid the bonds, in accordance with its own domestic regulations, and still has the funds and willingness to continue paying – ie if bondholders haven't received monies due, that is because of sanctions, and not its fault. But we doubt that will hold much sway with bondholders or in international courts. However, such a forced default – due to government sanctions (rather than a court decision, as in Argentina's pari passu case) – is rare and it remains to be seen what the legal consequences are.

As a result, while dealing a reputational blow to the Kremlin (and there must be one given Moscow's creative yet futile attempts to avoid it coming to this), an actual payment default may have little market impact while recovery looks a distant prospect.

Indeed, we doubt bondholders will do anything other than wait at this stage. We do not think they will take the trouble to vote to declare a default event. And, for as long as the war, and sanctions, continue, bondholders may see little value in seeking to accelerate the bonds or calling cross-default on the rest of the bond stock. Rather, we expect the bonds would fall into default sequentially as each subsequent payment falls due, like Venezuela did after its 2017 default. Nor will bondholders be in any hurry to organise into a formal committee. 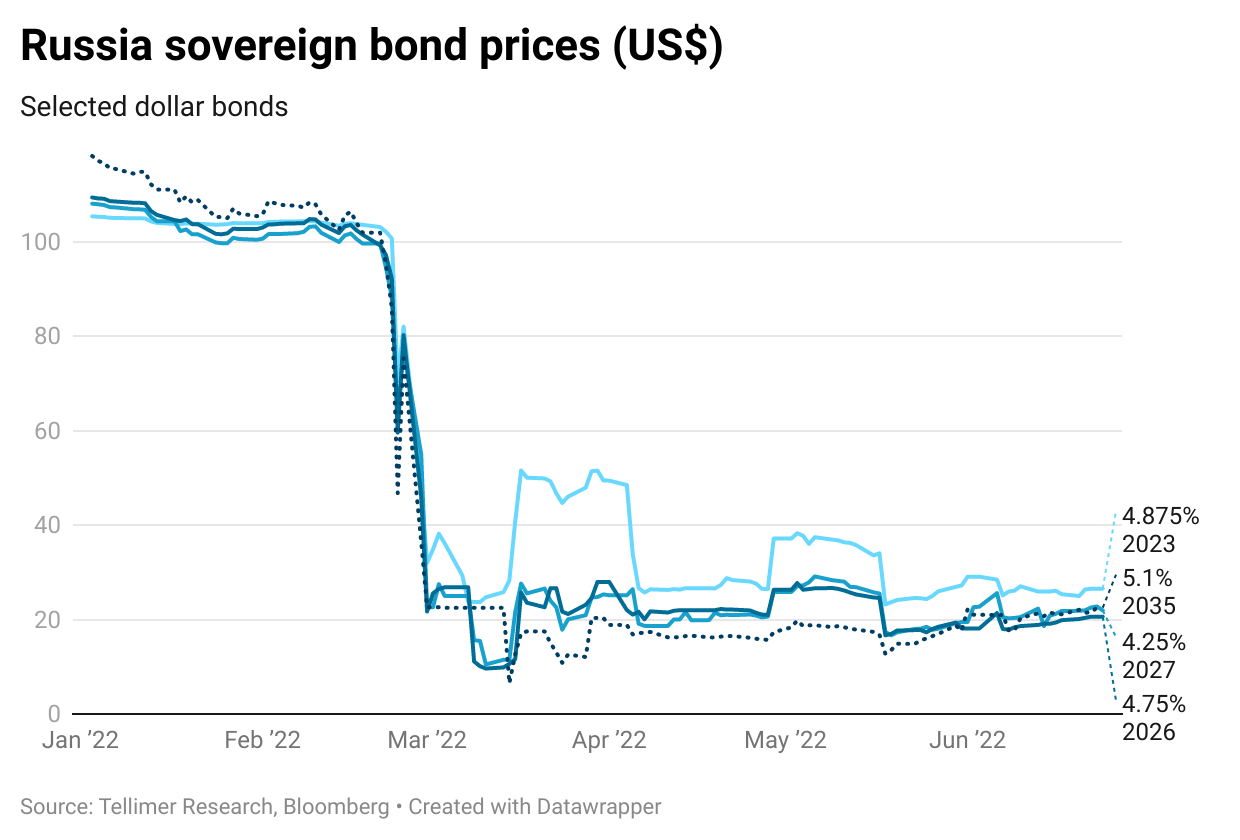