Russia: Budget deficit to reach 2% in 2023; financed from borrowing and reserves

On December 1 President Putin approved the 2023-2025 budget law, thus ending the legislative procedure for FinMin Siluanov's "most difficult budget in life". The FinMin indeed had a challenging task with increased expenditures required for economic transformation and increased military and police activity and at the same time lower budget revenues, constrained by sanctions and the recession. The government, however, tried to remain prudent, with the deficit projected at 2% of GDP in 2023 and gradually contracting to 0.7% in 2024. The bill successfully passed readings in the Duma and the Federation Council with most of the changes suggested by MPs being only technical. As the draft budget was prepared prior to the annexation of Ukrainian territories, several amendments also saw RUB 1.9tn expenditures redistributed, with higher spending on the annexed regions, including Crimea. That, however, did not affect the main parameters of the budget. The Audit Chamber criticized the budget for being based on a questionable economic outlook, prepared by the EconMin, and for unevenly distributed spending with expenditures surging in Q4. That criticism did not lead to any changes to the budget. 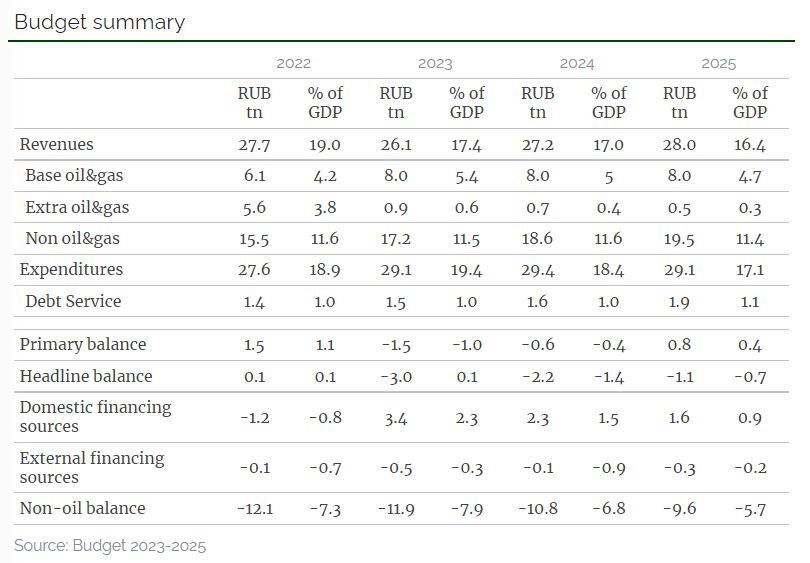 The EconMin's outlook indeed looks very optimistic: in its September edition the ministry expected GDP to contract by 2.9% in 2022 and by another 0.8% in 2023, but return to positive growth of 2.6% in 2024 and 2025. Though the outlook was released on the day the authorities announced forceful draft of 300k people to continue with the invasion of Ukraine, it was clearly prepared before that and did not consider this factor. The EconMin, however, did not update its outlook after that though the mobilisation shock on the economy seems to be smaller than expected. In Jan-Oct GDP contracted by 2.1% y/y, according to EconMin's flash estimates. So, the ministry's expectations for 2022 are likely accurate, though they are considerably more positive than foreign experts' forecasts: the latest IMF's WEO saw Russian GDP falling by 3.4%, the World Bank expects it to contract by 4.5% and the OECD by 3.9%.

The figures for 2023 and 2024 differ even more radically. The global consensus is that monetary and fiscal policy managed to delay the inevitable and the economic decline will continue in 2023 and may even accelerate. The IMF and the WB expect 2.3% and 3.6% GDP contraction, respectively, and the OECD sees an even bigger decline of 5.6%. These forecasts may be too conservative, but at the same time, we must consider that the EconMin initially did not factor in mobilisation and mass emigration of the workforce in October. Other possible risks in the EconMin's outlook are the expected Urals export price, which looks rather optimistic considering the introduction of the price cap and we must keep in mind that this is the crucial factor for budget's oil&gas revenues.

GDP dynamics in 2023-2025, according to EconMin's outlook, would be supported mainly by consumption, rising 2% on average over the forecasting period after a fall of 2.9% in 2022. Private consumption will pioneer growth, increasing by 2.8% on average over the period. The EconMin explains this growth with the economic policy aimed at higher disposable income, public social support and lower poverty levels, but we are rather sceptical about this assumption, as the EconMin always declares these policy goals, but achievements have been modest even when the economy was growing. Now the EconMin sees real disposable income growing by 1.6% in 2023 and by 2.8% in 2024 and even higher growth of real wages. Recently, Rosstat reported a decrease in the poverty level in Jan-Sept to 17.2% from 17.6% a year ago. After falling by 5.7% in 2022, investments will continue to decline in 2023 by another 0.9%, but they are forecasted to grow in 2024-2025 by 4.8% and 4.5%, respectively, after the economy passes the transformation stage. That means new supply chains are established and exports are successfully reoriented toward friendly countries. Exports are expected to decline slightly in 2023 after falling by 9% in 2022, but would grow by 2.8% annually in 2024-2025, while imports are expected to rebound after a 14.5% y/y plunge in 2022. So, the net exports contribution to GDP growth would gradually shrink, as well as the record-high CA balance. Exports would grow due to the non-oil&gas component which is actually quite possible, given that energy exports were more resilient to the sanctions this year. Imports should increase due to the new trading partners in the East and the parallel imports scheme.

The ruble is expected to gradually depreciate over the forecasting period to RUB/USD 72.2 in 2025 on a shrinking CA surplus. The most debatable assumption of the macroeconomic outlook is the average Urals price, set at USD 70.1 per barrel in 2023 and gradually falling to USD 65 in 2025. This is much higher than the recently introduced price cap of USD 60. The EconMin believes that the global oil price would decrease, but so will the discount for Russian oil. However, now it seems equally possible that the discount would grow as well as prices. New Russian oil customers, that being China, India and Turkey, would likely use the chance to set the price lower now and they do not even need to support the price cap to do so, they may just demand internationally recognized insurance for the deliveries. So, the budget may lack the oil and gas revenues it expects and hence face a higher deficit. The ministry did not provide estimates of expected oil output, but the share of extracting industry in the GDP is forecasted to gradually decline from 11.9% in 2022 to 9.8% in 2025. 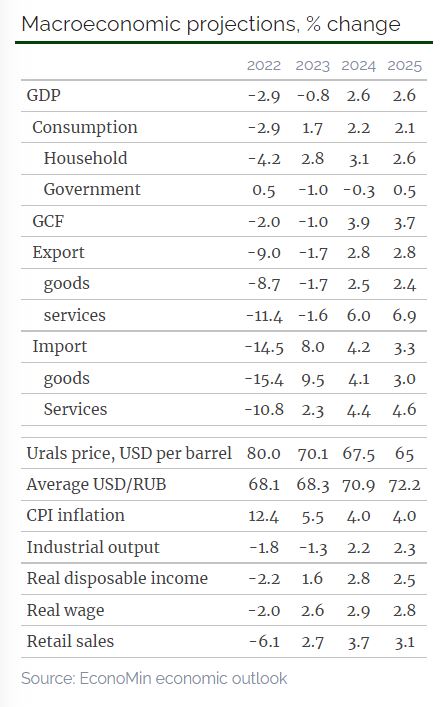 Based on these assumptions, the FinMin expects budget revenues to decline to RUB 26.1tn in 2023 as oil&gas revenues would plunge by 23.9% to RUB 8.9tn. According to the new fiscal rule, greatly simplified, RUB 8tn of these revenues would be considered base, meaning they can be freely spent and the rest RUB 0.9tn are considered additional revenues and should be stored in the National Wealth Fund (NWF). At the same time, the FinMin plans to spend more NWF money than the additional oil&gas revenues projected in 2023-2024 in order to finance the fiscal deficit, so that rule would really come into effect only in 2025. In 2024-2025 oil&gas revenues would decline even further on lower global prices and their ratio to GDP as a result would contract from 8% in 2022 to 5% in 2025. Non-oil&gas revenues, on the contrary, are assumed to grow over the period, reaching RUB 17.2tn in 2023 (+6.5%), RUB 18.6tn in 2024 (+8.1%) and RUB 19.5tn in 2025 (+4.8%). Their ratio to GDP is expected to surge in 2023 to 11.5% from 11% in 2022 and remain close to this level in 2024-2025. These revenues are projected to grow mainly due to the growing VAT and corporate income taxes, which should be achieved due to better tax administration and higher economic activity.

Looking at another revenue breakdown, after increasing in 2023 corporate income tax is assumed constant as a share of GDP, as well as excise duties. The extraction and natural resources tax, on the contrary, go down in 2023 and stabilize later on. Customs duties decline through the forecasting period, which is odd, considering the expected increase in exports and imports. VAT becomes the most important source of revenues and grows throughout the forecasting period. So, the FinMin expects smaller dependence on oil&gas, but at the same time does not hurry to reduce expected revenues, hoping the growing VAT would compensate for that and we see certain risks of wishful thinking here. 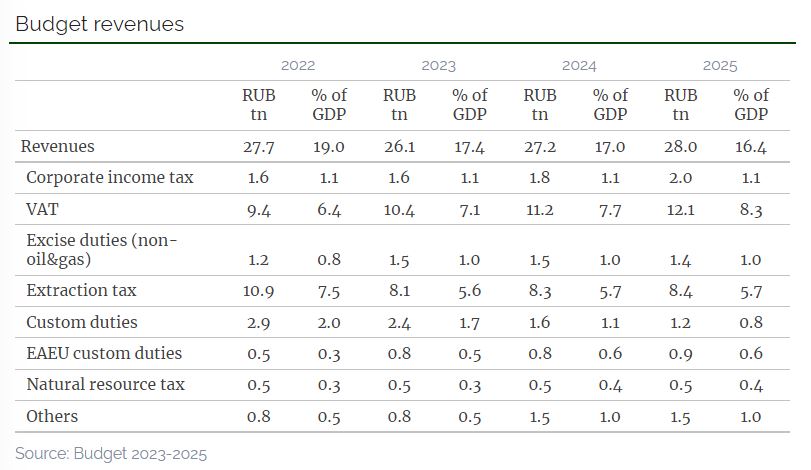 The FinMin tried to stay prudent with a rather limited increase. Spending would grow by 5.4% in 2023 to RUB 29.1tn, 1% in 2024 and decline by 0.7% in 2025. On Dec 8, FinMin Siluanov said that the ministry now expects a bigger deficit of 2% of GDP in 2022 due to the unforeseen spending, likely related to the mobilisation and intensification of military activity. If this deficit increase is due to the expenditures side, spending would be actually lower by 0.4% in 2023 than in 2022. However, we believe that budget revenues were also shocked in Q4 by the constrained demand (hence, lower VAT revenues), so spending would still grow in 2023, but only marginally.

Surprisingly, the biggest increase in spending does not come from military expenses. As they were already hiked in 2022, the FinMin plans to increase them just by 6.5% to RUB 5tn in 2023 and the following years they would gradually decrease. It is national security - police, FSB, etc. - that would benefit the most from the new budget, as related expenditures would surge in 2023 by 58.4% to RUB 4.4tn, so the Kremlin seems to doubt the nationwide war support it regularly boasts about. Spending on economic development would surprisingly decrease by 18.6% to RUB 3.5tn, despite the announced plans to support economic transformation. Social security spending is planned to grow by 13.8% to RUB 7.3tn, so this is probably the main channel to boost consumption (and reduce social tension at the same time).

Another breakdown of government spending shows the FinMin plans to spend less on public consumption, with both state purchases and a public wage fund decreasing by 3.8% and 2.8% respectively in 2023. CAPEX would go down by 24.6%, marking the biggest slump, while the social transfers would grow by 22%. Debt service would rise by 8.3%, partly due to the weaker ruble. The biggest increase would be seen for classified spending - that partly includes both military and national security expenditures, which would grow by 34%. 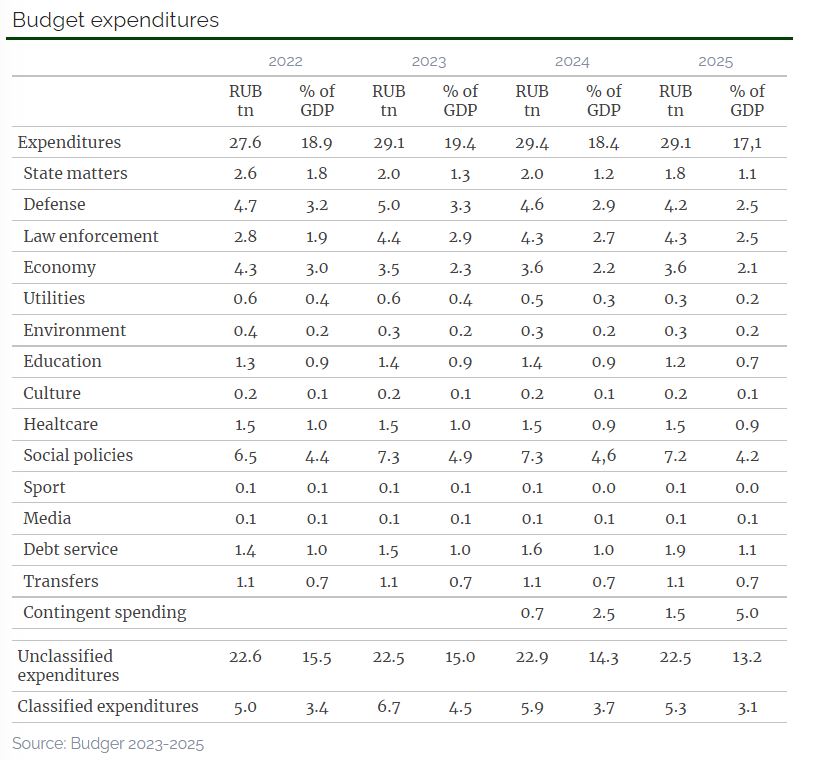 So, with the forecasted revenues and expenditures, Russia faces three years of budget deficit: RUB 2.9tn in 2023, RUB 2.2tn in 2024 and RUB 1.4tn in 2025. The main financing sources would be OFZ borrowing, which would reach RUB 1.7tn, RUB 1.9tn and RUB 2.0tn net in 2023, 2024 and 2025, respectively. The second source would be the National Wealth Fund, from where the government plans to spend RUB 2.9tn in 2023 and RUB 1.3tn in 2024. That sum is expected to be partially compensated by the extra oil&gas revenues, but we already mentioned the risks of overestimation of this figure. Curiously, the FinMin still hopes to issue USD 1bn eurobonds annually in 2023-2025, most likely in CNY.

As a result of the deficit financing split between new borrowing and NWF transfers, we can see debt rising over the forecasting period, though staying at a comfortable 17.5% of GDP in 2025. External debt would increase on state guarantees, as the FinMin plans only modest Eurobond placements. Domestic debt would grow on new OFZ borrowing. The National Wealth Fund would shrink to 3.7% of GDP in 2024 before returning to growth in 2025. 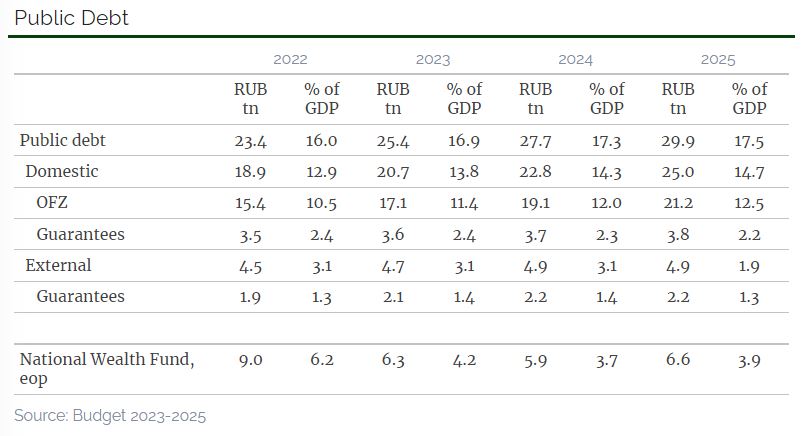