Russia and the West: No breakthrough in international talks this week

A week of international diplomacy, designed to defuse tensions over Russia's aggression towards Ukraine, has come to an end, although so far, with little to show for it. It follows talks at the OSCE yesterday, the NATO-Russia Council on Wednesday, and bilateral talks with the US on Monday, and comes after the Biden-Putin summit in December.

Russia has described talks as hitting a dead end, and threatened unspecified consequences in response. It is looking at options "in case the situation around Ukraine worsens", according to media reports (conveniently ignoring the point that that will only happen at Russia's own making; as NATO's Secretary General said on Wednesday, that's the reason why we are here). The West meanwhile has offered an invitation for more talks.

The West also repeated its message that any use of force against Ukraine will be a massive strategic mistake and will have severe consequences, including coordinated sanctions (for example, see statement by the UK Foreign Secretary).

But did we expect anything else? While talks are good, and there was relief in some quarters that they were able to get round the table, the talks were designed to fail because Russia's demands (its key demands being to prevent Ukraine joining NATO and the Alliance's eastern expansion) are unacceptable to the West. The US and NATO allies are willing to discuss arms control, missile deployments and confidence-building measures, but these are of second order to Moscow.

What happens next? The talks' failure may be the excuse President Putin wants to escalate tensions even further, hoping the West will blink first.

And we may have seen what some of those "unspecified consequences" look like after overnight reports of a massive cyberattack against some Ukraine government websites – although so far the Ukrainian authorities have been careful not to say who is behind it, it would seem no coincidence after Russia didn’t get what it wanted in the talks.

The other implication is deterioration in Ukraine's financing conditions and worsening economic outlook (a weaker Ukraine economically is probably another of Moscow's objectives). Ukraine bonds have fallen sharply today.

Ukraine US$ bonds, already on a declining trend since September, have fallen sharply this week (likely overtaking Ghana as the second worst performer this year behind Argentina), perhaps on the disappointing news from this week's talks (although did anyone expect any progress so quickly?). Yields have risen by nearly 700bps on the front end ('22s) and 100bps at the long end, inverting the curve. The yield on the '22s is c17% while the long end is over 10%. With this (double digit yields), Ukraine has probably lost market access, and this could complicate financing plans this year, if sustained. The hryvnia (UAH) has also fallen 2.5% against the US dollar this year. 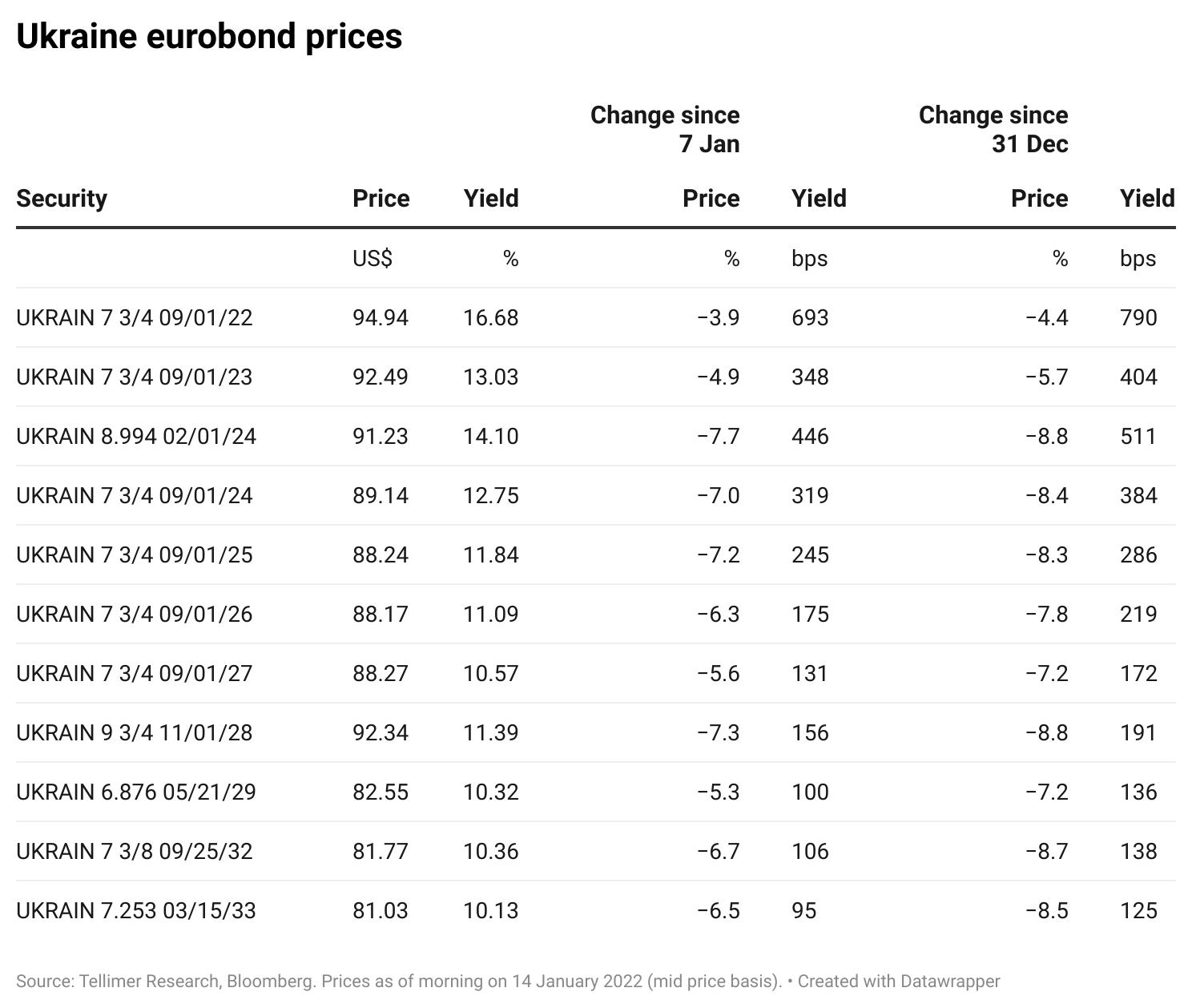 We maintain our Hold on US$ bonds, with a yield of 10.3% on the 7.375% 2032s this morning (+35bps from yesterday's close and +120bps (price -7pts) from close Wednesday) on Bloomberg (mid-price basis), but take this opportunity to downgrade our recommendation on the GDP warrants to Hold from Buy (at a mid-price of US$78.3 this morning on Bloomberg). The warrants have fallen by 13% this week. 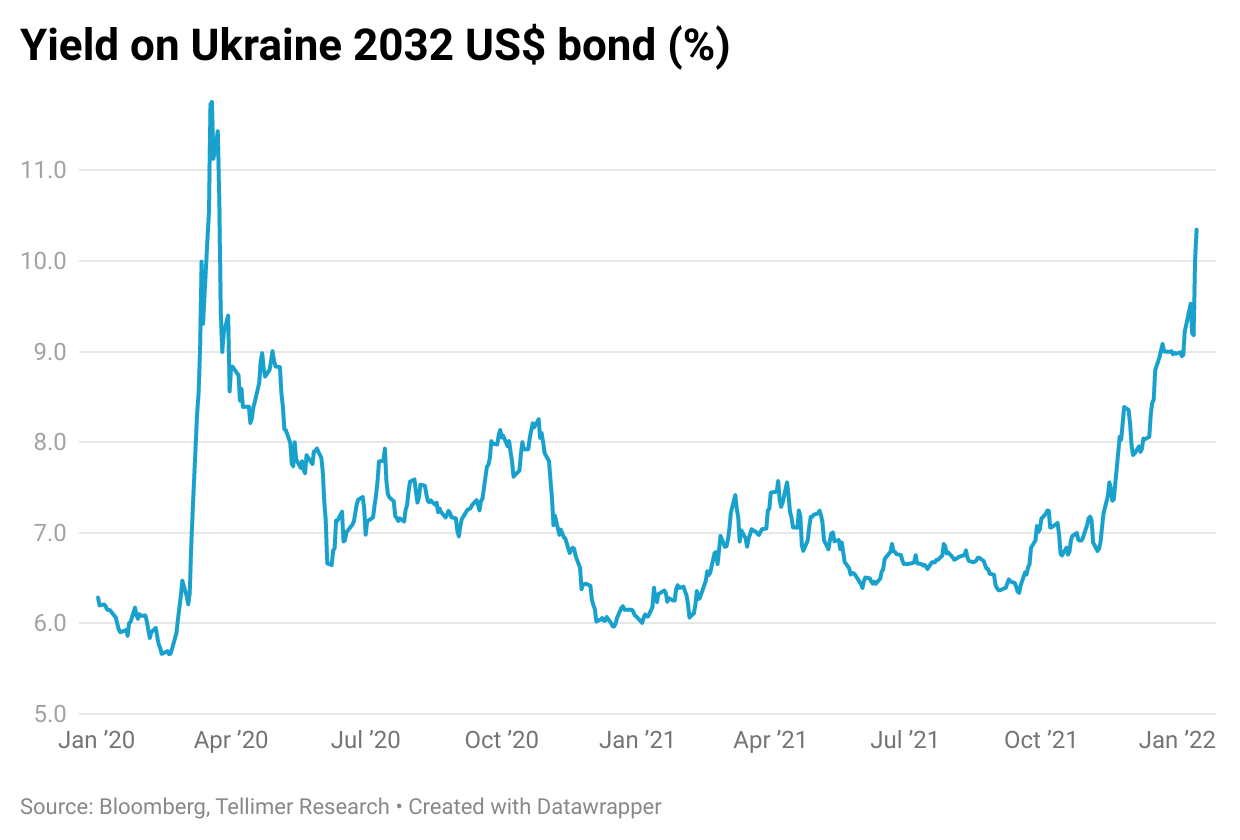 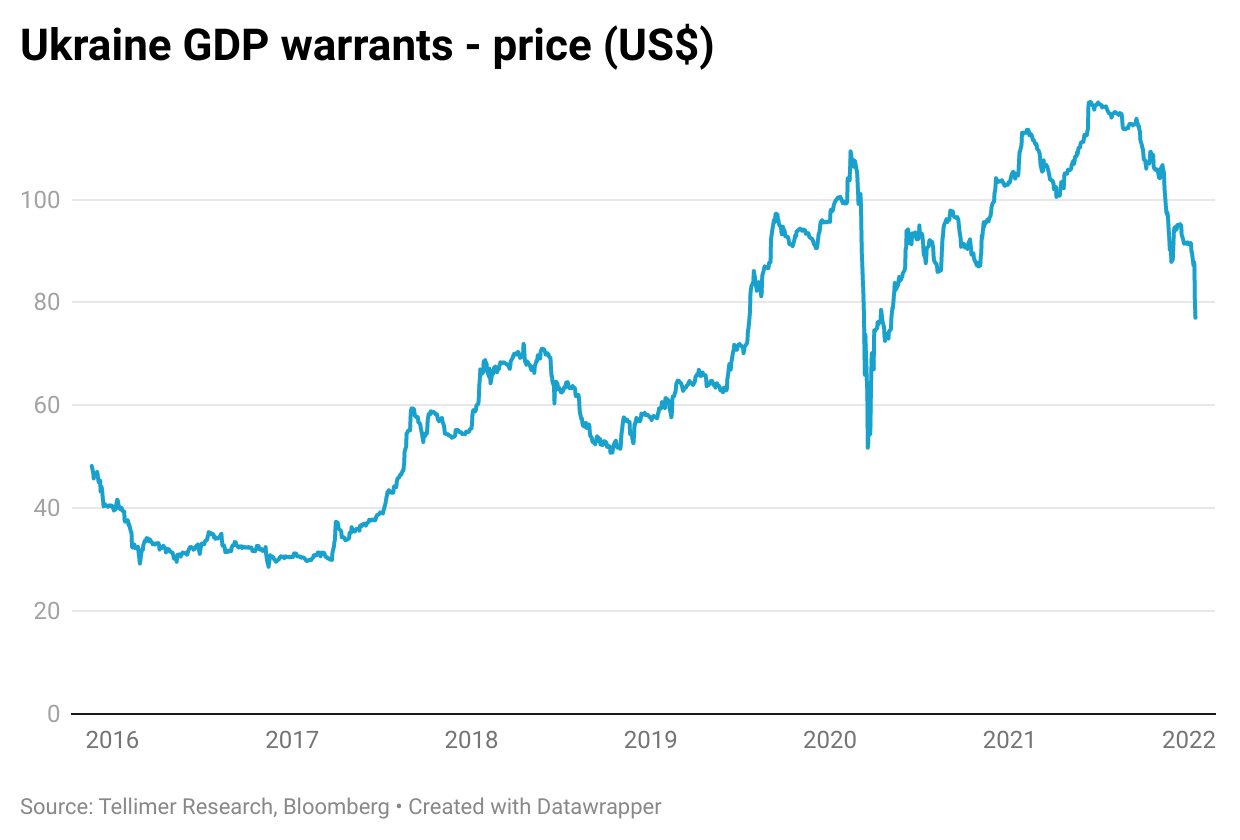 Ukraine – and Russian – markets will remain under pressure amid warnings "Europe was closer to war than any time in the last 30 years", according to Poland's foreign minister yesterday, while NATO's Secretary General said on Wednesday that "there is a real risk for a new armed conflict in Europe." The ruble is down over 2% against the US dollar this year as the threat of sanctions hangs over the market. Global markets are, however, happy to shake off the threat of war.