Russia and its security buffer

With talks scheduled this week between Russia and the US and Russia and NATO, we review what Russia wants, its strengths and points of leverage, and its vulnerabilities.

Russia wants a thicker security buffer to the west, southwest and south. The wars in Georgia (2008) and Ukraine (2014) apart, events of the past year and a half demonstrate that Russia has the financial and military capability, opportunity and willingness to exploit weaknesses in these buffer states and divisions between the US and EU to intervene and try to secure its goal.

But there are limits to any 'Russian resurgence'. It cannot engage in a hot conflict large enough to cause significant financial cost and casualties among its own troops – as a campaign into the west of Ukraine would – and it certainly cannot risk a coordinated response, albeit a delayed one, from the US or NATO (which have many times more military resources).

Our central case is ultimate de-escalation and relief for Russian assets, eg its cheap equities, where forward PE is 5.5x, a 15% discount to the 5-year median, and forward dividend yield is almost 10%.

But, as the weaker protagonist, Russia also needs to project a degree of irrationality, which means the bumpy ride, in terms of geopolitical risk, will continue. Whether that de-escalation starts this week, during Russia-NATO talks, is anyone's guess. 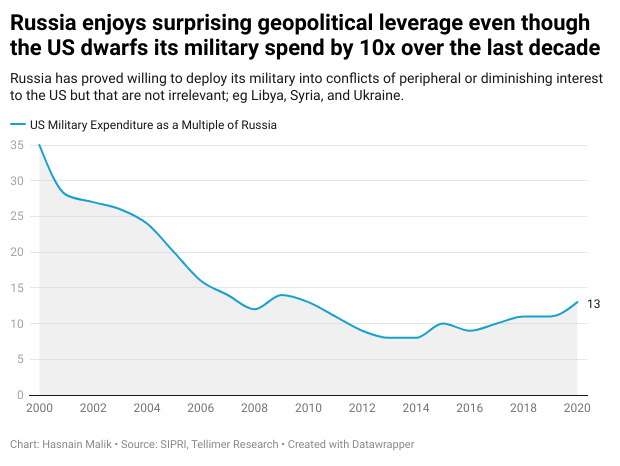 Russia wants security on its western, southwestern, and southern borders.

This does not mean resurrecting the USSR – an impossible ambition given the overwhelming scale of US military assets compared to those of Russia.

It also probably does not require all of its stated demands, as encapsulated in the treaty of security guarantees Russia presented in December 2021, being met. This proposed treaty included ending deployment of US troops in NATO countries should Russia feel threatened but not ending Russian deployment in former USSR territories should they be integrated into the Russian Federation – terms that are obviously unacceptable to the US and NATO.

In reality, better security for Russia amounts to friendly governments in countries it regards as its security buffer:

These are already in place in Armenia, Belarus, Georgia, Kazakhstan, Kyrgyzstan and Tajikistan and in each of these countries, the dependence of incumbent governments on the support of Russia has increased following the events of the past year and a half:

From a Russian perspective, the missing piece remains Ukraine. Russia has the capability and incentive to wage war in Ukraine and can do so far quicker than the multilateral group of countries (NATO, EU) that oppose it.

However, it would not be rational for Russia to start such a war because it:

A rational course of action would be to de-escalate tensions, having served up an effective reminder to the rest of the world as to how sensitive Russia is to any NATO incursions (military drills, arms supply and roadmap to membership) in its borderlands. If Russia is very sensitive about the US and NATO arming Ukraine then launching an invasion that would trigger a huge increase in the scale of that activity is counterproductive.

The problem is that, as the weaker protagonist, Russia's agenda is best served by projecting a degree of irrationality (ie a larger version of Iran). That does not change the end-point (de-escalation), but it means the ride there will be uncomfortable. 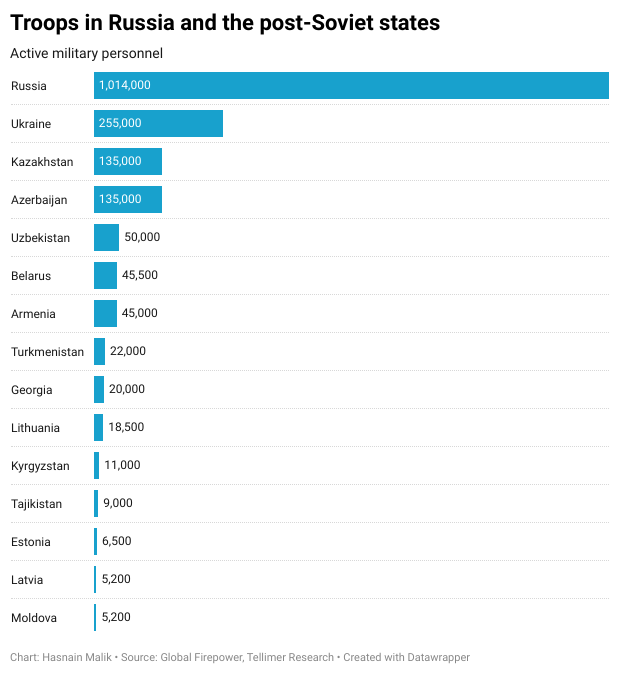 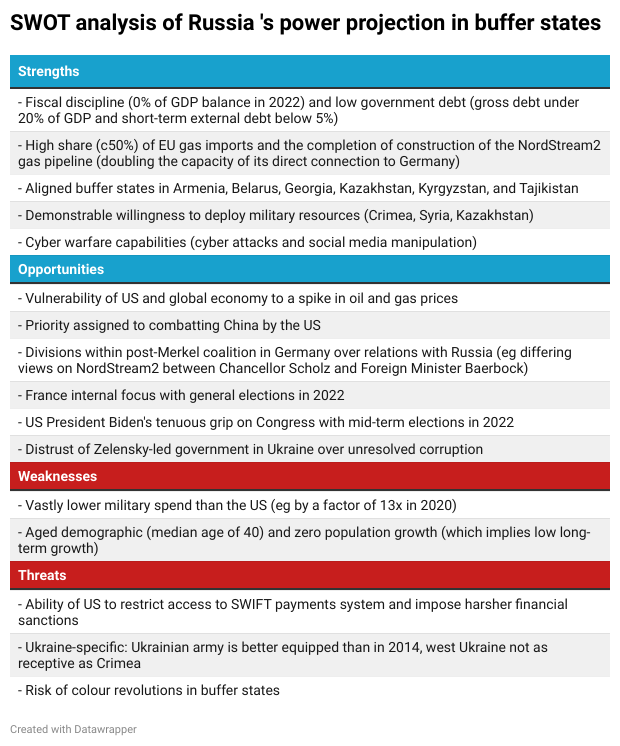