PM Florin Citu (PNL) dismissed Justice Minister Stelian Ion (USR-Plus) after a late government meeting last evening because he refused to sign a RON 50bn regional investment scheme named the Anghel Saligny programme. The programme is meant to finance investment projects of regional leaders and the USR-Plus does not agree with it, arguing it looks exactly like the former PSD government's PNDL (National Programme for Local Development).

The PNDL gives easy access to public money to regional governments and critics say it has been used as political tool to attract voters in local and general election and to influence regional leaders. The ruling alliance initially wanted to terminate this programme, but it seems that PM Citu not only added more financing in the budget revision but came up with a new version, the Anghel Saligny scheme. The USR-Plus claims those programmes are instruments of non-transparent use of public money for political interests. At the same time, the PNL sustains that the programme will help developing rural areas. PM Citu needs to please regional leaders because he runs for party leader position at the congress on Sep 25, while the USR-Plus has a small number of mayors or city council presidents.

PM Citu included the programme's approval on the additional government meeting agenda on Wednesday morning (Sep 1), taking USR-Plus ministers by surprise. The programme needed the signature of the justice minister and Citu tried to obtained it until the last evening meeting. In the meantime, the USR-Plus was constantly threatening on TV with leaving the alliance if PM Citu would not agree with its conditions to make the scheme more transparent and include objective selection criteria for financing. Honestly, we think that Citu's reluctance to accept such conditions is clear proof he wants to use the scheme as the USR-Plus says, as a political tool, specifically to attract regional PNL leaders' support in the upcoming PNL party conference.

With another minister dismissed, the USR-Plus is in the same situation as in April, when Health Minister Vlad Voiculescu was sacked. The alliance survived back then, after several weeks of negotiations and commitments that it will no longer repeat. Now we think that things are different and the USR-Plus is on the verge to make a radical decision, as otherwise it risks vanishing from the domestic political scene. There are three possible scenarios, the most likely one being a breakup of the ruling coalition.

By dismissing another USR-Plus minister without prior consultations, PM Citu forced the USR-Plus to leave the alliance or remain in the PNL's shadow and prove it has no influence in government. Besides, almost all commitments in the USR-Plus general election manifesto have been put aside, in spite of being agreed with ruling partners. The USR-Plus' reform commitments have been constantly delayed due to lack of support from the PNL and the UDMR, which claim that reform must take time and should not be pushed too fast.

The very fact that Citu appointed an interim minister from the PNL in a USR-Plus portfolio proves that he no longer wants the USR-Plus as partner. In the most likely scenario where the USR-Plus leaves the alliance, Citu loses majority support in parliament and will have to negotiate each legislative initiative. The PNL announced full support for PM Citu, including the internal rival part, which backs Ludovic Orban as party leader. The government is also exposed to being dismissed through no-confidence motions and the USR-Plus announced it would vote such a motion only to have Citu removed. The opposition PSD announced it lacks only 30 votes to bring the cabinet down in a no-confidence motion and USR-Plus support will be sufficient. Nevertheless, if this government is dismissed, the USR-Plus is unlikely to support a cabinet led by the PSD.

Leaving alliance and staying neutral in parliament may not be enough

A less likely scenario is with the USR-Plus leaving the ruling, but backing a PNL-led cabinet while negotiating every piece of legislation. This might be the most comfortable path for the USR-Plus, even though it might be perceived as giving up promised reforms. This party has proven to be stubborn, with strong personality and probably too much pride thus far, so we think that just leaving the ruling alliance to make a point would not be enough. Replacing Citu as PM seems to be the major priority for the USR-Plus now, but Citu enjoys a strong support inside the PNL, especially after pushing for approval for such important regional investment schemes like the PNDL and Anghel Saligny.

Keeping partnership with PNL is less likely, unless major demands are met in negotiations

The least likely scenario is the one where the ruling alliance survives once more. Negotiations will follow in the next days and the USR-Plus will try to obtain support for passing legislation that has been long delayed, like abolishing special division for investigating crimes in justice, eliminating special pensions, speeding up reforms, more money for infrastructure projects or returning to a two-round voting system for local elections. Unlike the previous time when the USR-Plus lost a minister, the situation looks more serious now. Both parties have internal elections in several weeks and their leaders have to political in order to win.

To conclude, we don't think this political crisis will end easily as last time. We don't think that Citu will be removed as PM, so there is a big chance that the ruling alliance crumbles. The most likely outcome is a minority-backed government led by the PNL in alliance with the UDMR, which would come with a slower reform pace and weaker anti-corruption fight, in our view. The opposition PSD returning to power is highly unlikely, because the PNL and the USR-Plus would not support such a government regardless of their political differences. We suppose an early-election scenario is also possible, but given how the PSD is improving support, the odds are the PNL and the USR-Plus would not risk going to a new election now. 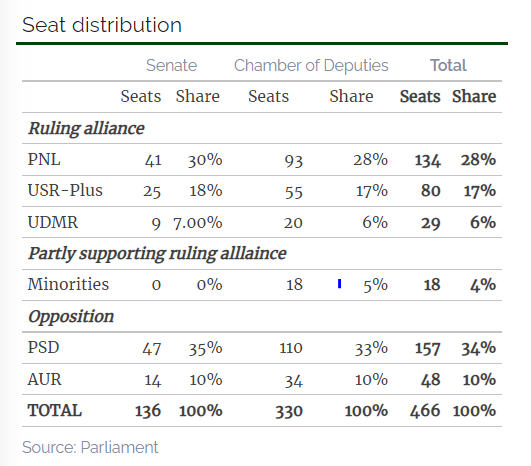