Romania is heading towards a vote of no-confidence in the government by parliament (5 October) and a presidential election (10 November). We have argued before that anything that could prompt a change from the current market-unfriendly government (fiscal populism, ad hoc regulation, inhibiting anti-corruption) should be welcomed by investors, but such change is far from assured.

For a meaningful acceleration in growth (the IMF forecasts 3% for real GDP growth in 2020 and 2021), Romania needs to engage in another round of structural reform and see a pick up in EU demand, but a change in government policy can at least promise a stop to self-inflicted wounds. The main risk is that, with or without a fresh election, the governing coalition is unstable and still driven by the PSD (for example, the combination of the PSD and the Pro Romania party, a party made up mainly of governing coalition defectors, is polling better than others, although still well short of a majority).

The no-confidence vote is more important because:

1) The parliamentary majority forms the government: the ruling Social Democratic Party (PSD) lost its majority (now down to 43%) at the end of August 2019 after the withdrawal of its coalition partner, ALDE (which, in turn, followed the imprisonment of former PSD leader Liviu Dragnea and ALDE's poor showing in the EU elections in May 2019 and the subsequent unwillingness of the PSD to support ALDE's candidate for the Presidency); and

2) Incumbent President Klaus Iohannis, who is standing for re-election, is already opposed to the PSD and is favourite to win anyway (successfully channeling anti-corruption sentiment, with an approval rating of c45%).

Romania equities have recovered this year and now appear close to fair value, absent a significant acceleration in growth, although forward dividend yields of over 7% still look attractive. Romania accounts for c8.5% of MSCI FM100 (which likely increases to nearer 11% after Kuwait's upgrade in June 2020). We see more potential for a positive change (for investors) in economic policy in Romania, compared with, for example, Poland (where parliamentary elections are on 13 October and the local equity index is cheap relative to history). But the risks are still high. Neither Romania nor peers in the EU periphery are among our favourites in the broader emerging and frontier universe.

Romania equities, measured by the local BET index (mainly an investment fund, banks and oil & gas stocks), are up over 30% ytd (in total US$ return terms), recovering from the collapse in December 2018 as the government has walked back, sometimes unwillingly, from some of the draconian tax measures and attempts to impede anti-corruption efforts. Trailing PB is now 1.1x (with trailing ROE of 14%), which is almost 20% above the five-year median. Valuation on a 2020f PE is 9x (with close to to zero aggregate consensus earnings growth). The one top-down valuation metric that does look very appealing is the 2020f dividend yield of 7.4%.

Performance of equities and US$ sovereign bonds 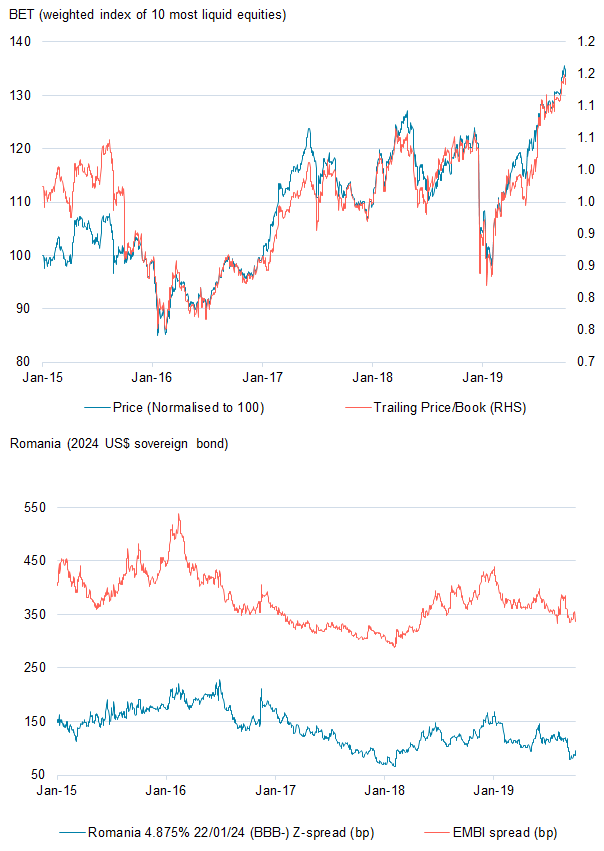 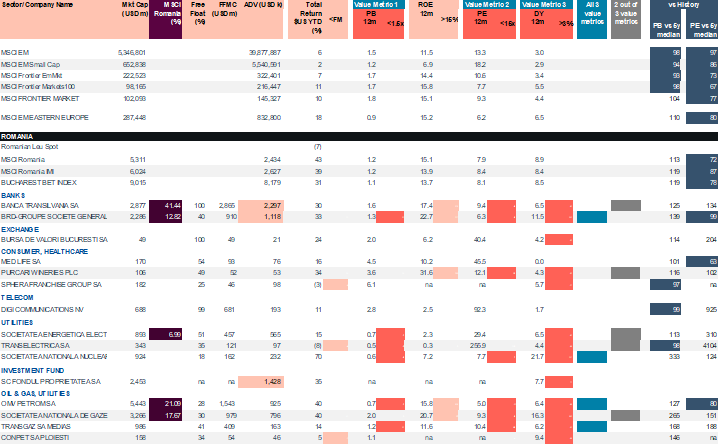 Romania: Ruling party setbacks may be positive for investors, 27 May 2019