Romania is inching its way towards a stronger and more market-friendly government. But there is no guarantee yet that the transition happens.

The loss of the no-confidence vote today is a step towards early elections. The current government is led by the minority liberal party, PNL (25% of MPs) but the PNL is scoring 45% in the latest poll of voting intentions (i.e. perversely, the loss of the vote of confidence is a positive for investors.)

Equities sharply re-rated in 2019 but several still screen well for value. A stronger parliamentary mandate and will for structural economic reform, led by current PM Orban's liberals (or, perhaps, even by former PM Ponta's "lite-socialists") is needed for faster and more sustainable growth (and, in turn, for a positive catalyst for equities). 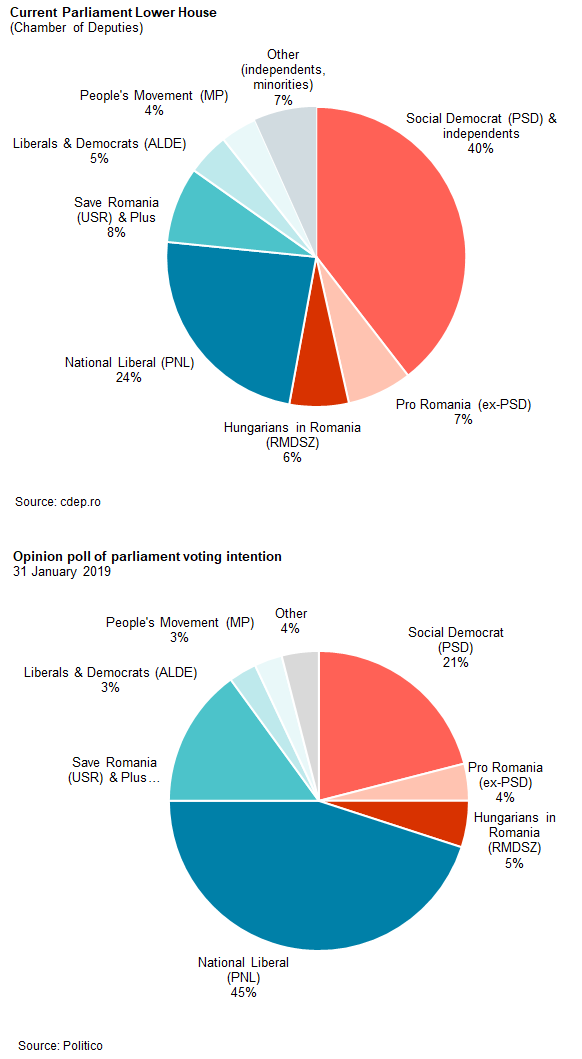 No confidence vote: this is really about shortening the path to early elections

The government has lost a parliamentary vote of no confidence on 5 February 2020, according to press reports of the early count.

The no-confidence motion was submitted in response to the government’s draft law on re-introducing a two-round vote for mayors in local elections. Opponents of the law argue there has been insufficient public debate (albeit they tend to hail from incumbent parties most likely to see dominant share of local government representation erode).

208 MPs supported the motion, made up of the PSD (Social Democrats, which is the largest single party in the lower house of parliament, with c40% of MPs, and led the previous government until October 2019) and the RMDSZ (Hungarians in Romania, an ethnic party, 6% of MPs). 233 votes (70%) were required for the no-confidence vote to pass; press reports on the early count suggest over 240 votes were received.

President Iohannis and PM Orban, head of the PNL (National Liberals, 24% of MPs, which leads the governing coalition) have publicly stated their intention to call for early parliamentary elections (due before March 2021). The aim is to establish a much stronger majority-based government with most recent opinion polls of voting intentions indicating the PNL, on its own, enjoys 45% popular support.

Early elections could be prompted by the loss of a vote of no confidence, followed by two failures, within a 60-day period of the no-confidence vote (ie by mid-April 2020), to win parliamentary approval of the cabinet proposed by the PM. The president has already indicated he will invite Orban to remain a caretaker PM in the event a no-confidence vote passes.

Fiscal deficit not under control

One of the main drivers was the 40% increase in pensions from September 2019, introduced by the previous PSD-led government and maintained by the PNL-led one. About two-thirds of fiscal spend is on public sector wages, pensions and benefits.

Sustained fiscal deficits in excess of the EU limit increase the risk of restricted access to EU structural development funding in the medium-term (the European Commission forecasts a fiscal deficit of 6.1% in 2021 if remedial action is not taken). 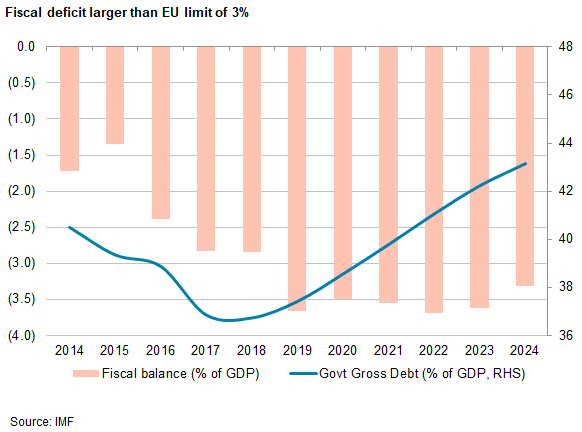 Equities: now for the hard part, a political mandate and will for structural economic reform

Romanian equities performed very well last year as draconian taxation and regulation of the banks, oil & gas, and pensions sector was diluted and the market-unfriendly government of the PSD was removed.

The local Bucharest BET Index of equities is up over 40% in the last twelve months. It is on trailing dividend yield of over 7% and forward 2020f PE of 9.6x (for negative 6% consensus aggregate EPS growth).

Although equities remain attractively valued, on trailing metrics and relative to history, there are a number of macroeconomic challenges ahead (low growth, high fiscal deficits, declining workforce and high wage growth, deficient infrastructure). After the re-rating of last year, we need to see a sufficiently coherent and market-friendly parliamentary majority emerge from the next election (whenever it takes place) and, at this stage, there is no guarantee of this.

Elsewhere in the “European periphery” of emerging and frontier markets in our coverage (Georgia, Iceland, Kazakhstan, Romania, Turkey, Ukraine), we still prefer Kazakhstan (cheap equities, successfully managed succession, constructive relations with the US, Russia and China). Globally, we see most opportunity in Asia. 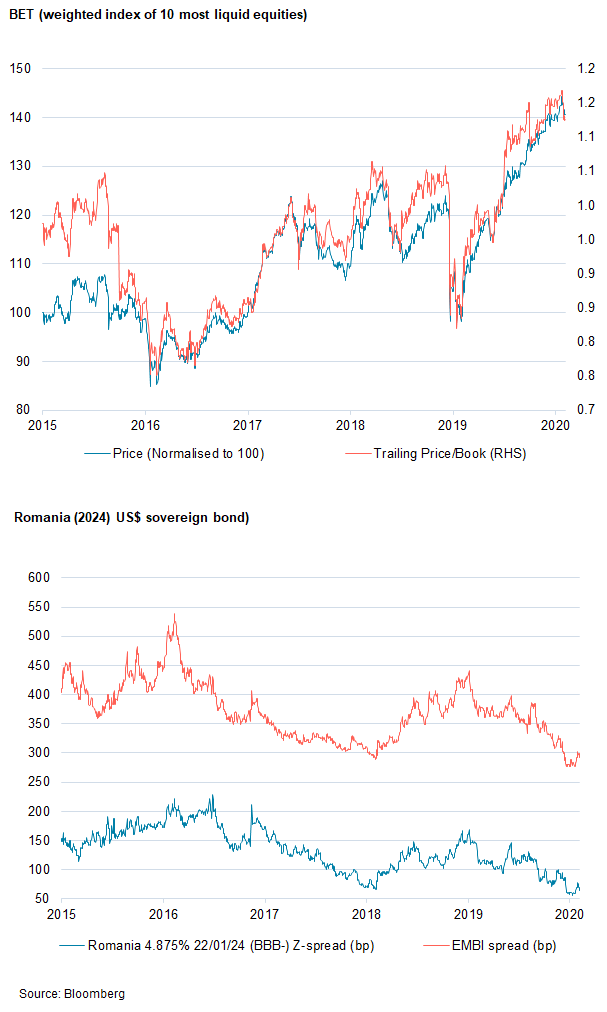 Romania: Ruling party setbacks may be positive, 27 May 2019