Oil sank last week and has begun this week much in the same vein amid demand concerns as lockdown measures in China continue to spread. Brent crude plunged almost 10% last week and is currently trading below $87 per barrel, while WTI dipped below $80 when looking at the front-month contracts. DIffrentials across the futures curves are also weakening, with the Brent prompt timespread narrowing to just 42cents a barrel, while that for the US benchmark has slipped into contango. Supply concerns in the US have all but dried up for now, while demand is expected to be impacted by a softening economy as the Fed’s aggressive rate hikes filter through.

The question now becomes does the current bearish trend for global extend. While demand concerns are present and could still be amplified, factors such as the looming Russia price cap and further sanctions are still present. OPEC+ will also be looking at potentially cutting output once again owing to the recent slide in prices. Therefore, there may still be some downside left in the short term, but a rebound could be expected through the final month of 2022 and into the early stages of 2023.

Uganda: Moody's on Friday changed the outlook on the government of Uganda to negative from stable and affirmed the B2 ratings. According to the ratings agency, the negative outlook reflects the view that amidst increasing external debt-service payments, a more challenging external environment marked by tightening global financial conditions, Uganda's external vulnerability risks are increasing. Debt affordability is also deteriorating at a more rapid pace than the median of B2-rated peers, and the shift towards a tighter monetary policy stance as well as tighter global financial conditions imply a sustained rise in financing costs that risks limiting Uganda's fiscal space and shock-absorption capacity. Moody's added that the negative outlook signals that a ratings upgrade is unlikely over the near term.

South Africa: Broadly in line with expectations, S&P Ratings reaffirmed SA’s credit rating at BB- but warned that the outlook could be revised to neutral from positive if the planned bailout of Eskom weakens the government’s debt trajectory. That is especially true if the bailout materializes and Eskom has not steadied its operations or finances. Almost on cue, Eskom announced over the weekend that load shedding would progress to level four, highlighting where the risks lie.

Egypt: Egypt's Petroleum Minister has indicated that new renewable-energy projects will enable Egypt to accelerate plans to become a major supplier of power and hydrogen to Europe. Egypt wants to send electricity to Cyprus and Greece through a cable that will run under the Mediterranean. It also aims to export hydrogen, which can be used as a fuel for power stations. According to the minister, discussions about the cable are progressing, and Egypt could be ready to send power to Europe in the next five years.

Ghana: The Bank of Ghana has directed banks to withdraw foreign exchange support to customers for the importation of certain non-critical goods. The goods affected include rice, poultry, vegetable oils, toothpicks, pasta, fruit juice, bottled water, and ceramic tiles. The directive is the latest measure taken by the central bank to reduce the high demand for US dollars in order to try to slow the rate of depreciation of the cedi.

Kenya: As the new government expedites payments that have hindered businesses from recovering from the coronavirus pandemic, Kenya's unpaid dues to contractors and suppliers dropped 13% in the third quarter to $3.6bn. President Ruto, in his inauguration speech on September 13, pledged to speed up payments to suppliers and contractors as delays squeeze cash flows. The government last week approved a plan to sell bonds worth KES 92bn to settle all outstanding obligations owed to road contractors.

Kenya: A report by Treasury revealed that Kenya signed a loan deal for the fiscal year through June for budget financing with the Trade and Development Bank. The loan was priced on SOFR with a margin of 4.4% per year. Interest on overdue amounts will increase by 2% a year above the applicable rate, and a bullet repayment of a loan is due September 30, 2025. The syndicated loan is part of six foreign loans that Kenya contracted in the four months to end-August, totalling KES 105bn.

Nigeria: Data from the National Bureau of Statistics shows that nearly two-thirds of Nigeria's 200mn population survive on less than $2 a day. Almost 133mn Nigerians, or 63% of the population, are "multi-dimensionally poor," meaning they suffer simultaneously from multiple disadvantages, including a lack of access to clean energy, housing, health care, water, and sanitation, according to the survey of nearly 57,000 households. That's up from 54% in 2018 and more than any other country. According to the NBS, the lingering impact of the pandemic-induced 2020 recession and supply shocks resulting from the war in Ukraine have pushed more Nigerians into extreme poverty.

Nigeria: Against a backdrop of weak oil production and the adverse effects of the recent flooding, the International Monetary Fund has revised Nigeria's GDP growth forecast for this year to 3% from 3.4%. The lender, however, expects output growth to improve slightly next year. Meanwhile, inflation is expected to moderate at the end of this year as the start of the harvest season more than counters the projected increase in rice prices caused by the recent flooding. The IMF also said that monetary conditions were accommodative despite tightening measures undertaken by the central bank as the policy rate remained below inflation.

Forex: IMF calls for the Nigerian naira conversion rate to be determined by banks

The Nigerian naira remains in the spotlight in the Africa FX complex, with the International Monetary Fund urging the Central Bank of Nigeria to reduce its interventions in the foreign exchange market and allow banks to set the naira conversion rate. According to the lender, this will stop speculation around possible devaluation fuelled by dollar shortages, rising inflation, limited debt servicing capacity, and restrictions on dollar transactions. The lender added that “these factors hinder much-needed capital inflows, encourage outflows, and constrain private sector investment.” The central bank “should step back from its role as the main foreign exchange intermediator” and allow “banks to freely determine foreign-exchange buy-sell rates.” 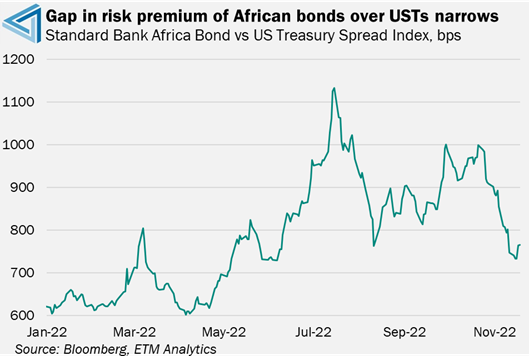 Nigeria operates multiple exchange rate systems, including a fixed official rate and a parallel rate. In the official market, where the government controls the exchange rate, the naira has shed over 4.0% since the start of the year. Meanwhile, in the parallel market, the naira has lost over 30% this year and repeatedly plunged to record lows this year.

A more than 70% differential between both rates is driving speculation that the government will devalue the official rate to close the gap. In the currency derivatives market,  bets for a significant naira depreciation have been building as speculators price in a notable devaluation in the currency. Our in-house indicators point to a naira overvalued by 15% on a real effective exchange rate basis, suggesting there is room for a considerable depreciation in the naira.

Fixed Income: Investors are being enticed by the significant undervaluation in EM bonds

Following the most brutal sell-off since the ’08 GFC, appetite for emerging and frontier market bonds is returning, with investors unable to ignore the attractive valuations and high yields on offer. This comes against the backdrop of a pivot in global monetary policy, with markets pricing in a slower pace of interest rate hikes amid mounting recession concerns and the easing of fiscal pressures due to increased financial support from international lenders such as the International Monetary Fund and the World Bank. 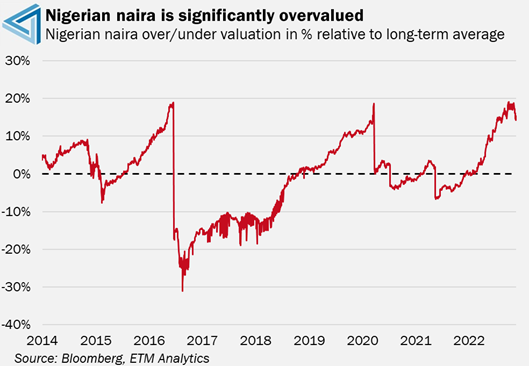 Elevated commodity prices are helping to ease fiscal fears amid expectations that the high commodity prices will underpin government revenues in commodity-exporting countries, which will lower the chance of sovereign defaults. Highlighting that investors are turning bullish on emerging market sovereign debt is the compression in the spread between high-yield sovereign bonds in emerging markets and US Treasuries. Specifically, the gap in the risk premium of emerging market sovereign bonds over high-grade bonds has fallen at its fastest pace since 2015. The spread between African bonds and US Treasuries has all narrowed sharply in recent weeks, falling from a high of 999bps in late October to 766bps.

The financial support being provided by major international lenders and the easing of rate hikes bets in the US have made investors confident enough to increase their exposure to emerging and frontier market bonds. Should risk sentiment continue to improve, the stage would be set for a notable outperformance of emerging market bonds. As mentioned in previous commentary, countries with sound macroeconomic and fiscal dynamics and improving political dynamics are expected to outperform their peers as the global pivot in monetary policy takes place and emerging market bonds rebound.

With much of the focus for inflation hawkish in Africa still centred on food prices, it is worth looking at the latest developments in the soft commodities market. Russia agreed to a renewal of the Black Sea grain deal, allowing Ukrainian agricultural products to be exported through Black Sea ports for another 120 days. While this comes as a relief, the market is still pricing in a significant supply risk premium amid fears that Russia could pull out of the deal. 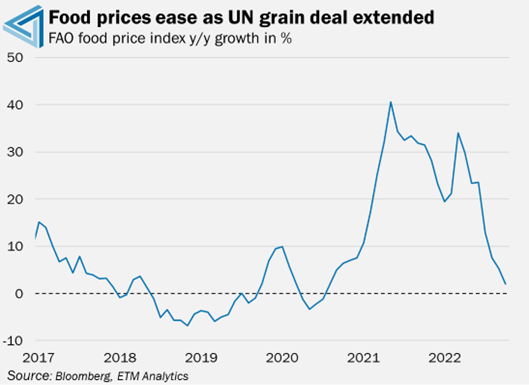 The latest data from the UN shows that Ukraine has shipped over 9 million tonnes of wheat, corn, sunflower oil and other goods from three ports located in the Odesa region since exports resumed in August. This has helped to ease supply concerns and reduce global food prices. The grain deal will also allow fertilizer to be exported, which will help relieve input costs for farmers across Africa.

Speaking of which, a top UN official said Friday that Africa is next in line to receive crucial Russian fertilizer that has been prevented from being exported from European ports to impoverished countries. Russia has offered to donate 260,000 metric tons of fertilizer stored in European ports to farmers in the developing world who have been priced out of the fertilizer market because of shortages. The UN official said the first ship is scheduled to leave the Netherlands on Monday for Mozambique, where the fertilizer will go by land to Malawi. Many African countries are experiencing a food security crisis, and the high fertilizer costs have been a major factor weighing on the amount grown by farmers. Therefore, the hope is that the grain deal will help to ease global supply concerns as well as help to improve farming conditions within Africa.