Wall Street took a pounding yesterday, and while futures this morning point to a modest bounce, the outlook is more troubled given the jump in inflation that has prompted speculation that the Federal Reserve may have to unwind some of its stimulus efforts sooner than expected. The Dow dropped by the largest amount since January and came as a warning that current market performance is heavily dependent on the central bank's stimulus efforts.

Stronger than anticipated inflation in the US spooked investors and sent many scurrying back to the USD. This was the quintessential short-squeeze, with many investors having just come off the weaker than anticipated payrolls data that had sent the USD tumbling just a few days before. The recovery in the US is unlikely to last, but it comes as a warning to investors that the system is exceptionally leveraged and dependent on loose monetary policy. It is highly questionable whether the asset price gains and weaker USD will persist in an environment where Fed officials might be forced into removing some of the excess stimulation.

In the commodity space, gold has steadied this morning following yesterday’s US inflation lead sell off. US CPI jumped to its highest level since 2009 printing 4.2% versus an expected 3.6%. This caused the US Treasury market to sell off resulting in higher yields across the bond curve as investors reassessed the Fed’s comments on inflation being a temporary phenomenon, there was also a rotation into the USD which improved its carry.

Both of these factors were gold negative, however gold does offer a hedge longer term against higher inflation dynamics, so there is a natural floor when using the inflation angle to short the gold market.     Palladium and Platinum are on the front foot this morning recovering some of the losses seen in yesterday’s session.

Oil prices meanwhile are edging lower this morning when looking at the Brent and WTI front-month contracts, as the Colonial pipeline in the US restarts operations following last week’s cyberattack. Limiting the declines, however, is the official EIA report released yesterday, which showed that stockpiles of crude fell to their lowest since February last week, eliminating the supply glut created by the pandemic last year.

Rwanda: The Rwandan Finance Ministry revised the 2021/22 budget upwards by 10% to RWF 3.81trn. On the revenue side, the finance ministry anticipates government revenue to come in at RWF 2.54trn in the fiscal year starting July 1, which is enough to cover 67% of the budget. A breakdown of revenue estimate revealed that RWF 1.72trn of government revenue will be raised from taxes. The budget shortfall will be financed by external borrowings of RWF 651.5bn and 16% of spending plans with grants worth RWF 612.2bn. Lastly, the government plans to spend about RWF 1.93trn or 50.8% of the budget on development spending.

Rwanda: The National Bank of Rwanda’s Monetary Policy Committee voted in favour of leaving its benchmark interest rate on hold at 4.5% for the fourth consecutive meeting. The need to supporting economic growth and the benign inflation environment underpinned the central bank’s decision. In a statement accompanying the decision, the central bank said that it forecasts inflation to remain subdued this year, coming in at 2.2% in 2021 before accelerating to 6.5% in 2022. On the growth front, economic activity is expected to rebound this year to 5.1% from a contraction of -3.4% in 2020.

Nigeria: Governors from Nigeria’s southern states called on President Muhammadu Buhari to address the nation over the rising security issues.  The call comes after a meeting was held on Tuesday by the Southern Nigeria Governors Forum. The Buhari administration is grappling with a wave of security attacks from Islamist insurgents in the northeast, worsening conflict between nomadic cattle herders and crop farmers in the central and southern region and a new separatist rebellion in the south-east. Failure by President Buhari to address the issue is slowly eroding support for the ruling government and adds to topside inflationary pressures as the outlook for foods prices rises further.

Zambia: The International Monetary Fund (IMF) yesterday said that it wants Zambia to implement agreed policies before resuming talks on a much-needed economic program that has held up debt-restructuring talks with external creditors, dampening bondholders' hopes that a deal might be reached before the August general elections. According to the Washington-based lender, "we are ready to continue discussions as those measures are taken. The timing when the measures are taken is in the hands of the government." Risks exist that the Zambian government may only be willing to implement reforms post elections, and thus negotiations over deal may drag on over the coming months.

In line with consensus expectations, headline inflation in Ghana slowed markedly in April. Consumer price inflation decelerated from 10.3% y/y in March to 8.5% y/y in April, its lowest level in more than a year. On a month-on-month basis, headline inflation quickened from 0.9% in March to 1.5%, its highest pace of growth since May last year. The inflation report published by the Ghana Statistical Service revealed that the drop in annual inflation was mainly driven by the fall in food prices. Specifically, food price inflation fell from 10.8% y/y in March to 6.5% y/y in April. This was, however, partially offset by rising non-food prices, which rose to 10.2% in April from 10.0% in the previous month. 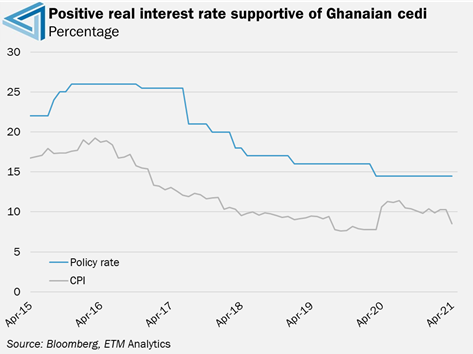 It is worth pointing out that as a result of the notable drop in inflation in April, headline inflation has fallen back within the Bank of Ghana’s inflation target range. The slowdown in inflation suggests that the central bank has room to maintain a degree of accommodation to help support the economy as it continues to battle the COVID-19 pandemic. While headline inflation decelerated markedly in April, risks to the inflation outlook remain to the upside amid soaring commodity prices, new tax measures and supply constraints.

Shifting attention to the FX market, the consolidative bias in the USD-GHS remains intact. For context, the pair has been hovering in a range between 5.76 and 5.78 for the past month. The drop in consumer price inflation in April and prudent monetary policy has seen Ghana’s real interest rate climb, which will be supportive of the currency. So far this year, the GHS has appreciated by 1.70% against the USD. Looking ahead, heightened commodity prices, rising real interest rates, and foreign capital inflows suggest that the GHS could extend its gains in the weeks ahead.

In a credit rating opinion released on Wednesday, Moody’s has noted that the opposition to the South African government’s plans to negotiate a consistent 3-year wage agreement with unions, that are demanding above-inflation growth in compensation, is likely to result in the primary deficit overshooting budget forecasts. Moody’s sees the government’s target of annual nominal growth in employee compensation below 1.2% over fiscal 2021-23 as “challenging”.

On the growth front, the GDP forecast for 2021 was reduced to 4% from 5% previously. Economic activity is expected to gradually pick up from Q2 and more substantially in H2. Higher commodity prices and an increase in nominal mining exports are seen as supporting output. Downside risks to growth, however, include the slow pace of covid-19 vaccine rollout and new waves of infection. Beyond the technical recovery, Moody’s forecasts growth to remain weak, just in excess of 1% amid continued structural constraints.

Like Fitch, these comments suggest Moody’s sees a bearish outlook for SA and therefore, further rating downgrades could be on the cards should wage negotiations not go the way of the government and structural impediments remain unaddressed. From a financial market perspective, this suggests that traders will continue to demand a significant premium for holding longer-dated South African government bonds and that a significant degree of steepness will remain baked into SA’s government bond curve going forward. While some emerging market central banks have begun hiking rates, the South African Reserve Bank is expected to keep rates on hold in the coming months, keeping yields on the front-end of the curve relatively anchored. 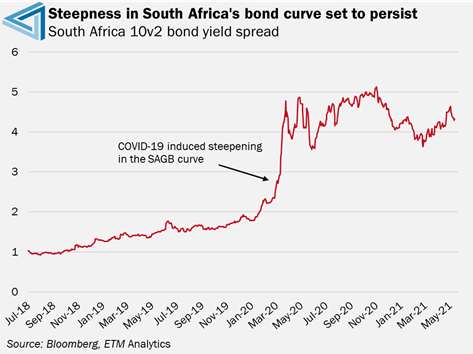 Macroeconomic: Kenya expected to save up to KES 78.17bn as a result of its debt repayment moratoriums

The COVID-19 pandemic has compounded Kenya’s fiscal challenges as government spending sky-rocketed and revenues tanked. The combination of which led Kenya to a precarious fiscal position amid a gaping budget deficit. This resulted in credit rating agencies and international lenders such as the International Monetary Fund raising some red flags over the country’s ability to service its debt repayments over the medium to long term if the current debt trajectory were to be maintained.

While many African countries entered into debt suspension deals offered by wealthier countries such as the G20’s Debt Service Suspension Initiative (DSSI) last year, Kenya was reluctant to apply for debt suspension given the ramifications that come with it. However, the East African nation made an about-turn in January this year after government revenue collection missed the target by 12.4% in the half-year period ending in December 2020. Lawmakers decided to pursue a debt suspension deal after Kenya had breached its debt-carrying capacity with its external debt service to exports ratio rising to 23% in December, surpassing the 21% threshold.

Recall that Kenya successfully applied for debt suspensions from the Paris Club and China. The deal with China, Kenya’s largest bilateral lender, accounted for 39% of the deferred debt. Note that China has provided financing for many major infrastructure projects in Kenya, including rail lines and roads. The debt suspension deal with the Paris Club deferred around KES 32.9bn under the G20’s DSSI framework.

National Treasury projects that Kenya will save up to KES 78.17bn due to the debt repayment moratoriums signed with China and the Paris Club. Specifically, the deferred repayments on loan principals will amount to KES 42.23bn in the current financial year ending June. Meanwhile, reliefs on interest payments are expected to be KES 35.94bn. On balance, while the debt relief should help alleviate some pressure for National Treasury this year, we still assess medium-term financing risks to be skewed to the upside. Going forward, failure on National Treasury’s part to return to a path of debt consolidation could lead the country to a position of fiscal distress in the not too distant future.