The USD surged on Friday and will have caught many short-sellers by surprise. The market was once again becoming dominated by the bears and the latest surge in the USD helped to clear some of these positions out of the market. Whether this recovery is sustained is questioned by most market professionals that see it as little more than a temporary clear-out rather than a longer-term trend. The weaker USD trend more broadly remains intact and will be supported by the ultra-accommodative Fed policy stance as well as the expansive fiscal policy despite the massive debt levels being accumulated. As a result of both, the US is consuming far more than it is producing and it shows up in the trade balance.

In the commodity space, gold is underpinned this morning with the yellow metal hovering around the $1775.00/oz mark as we head into the start of the EU session. We would like to point out that trade in precious metals maybe a little subdued through the course of today given the fact that the United Kingdom is out for a UK bank holiday.

In terms of focus, gold has taken a slight backseat as Palladium cleared the $3000.00/oz mark for the first time ever on Friday. Supply concerns and speculative bids have driven the metal to new highs and the trend remains very much topside focused. Demand from the motor and electronics industry is robust and is unlikely to taper in the near term. Automakers may well start to substitute palladium with platinum in due course given the price spike which will place a natural ceiling to how far the prices between the metals can diverge.

Copper fell on Friday as investors trimmed risk ahead of the Chinese holidays which stretch from the 3rd to the 5th of May as well as the UK Bank Holiday today which will see the LME shut for trading. The red metal scaled the all important $10000/tonne mark late last week and we remain bullish given the broader macro backdrop which contains huge monetary injections and stimulus programmes. The LME stated on Friday that it would announce around the 8th of June whether or not it will reopen its open outcry trading pit or permanently close the last open trading venue in Europe.

Uganda: Headline inflation for Uganda bucked a three month run of accelerating in April. Specifically, consumer prices fell from 4.10% y/y in March to 2.10%, its slowest pace of growth since September last year. The April CPI reading was also lower than the 2.7% recorded during the corresponding period in 2020. The inflation report published by the Uganda Bureau of Statistics revealed that the soft inflation print was partly due to the changes to the consumer price index reference year from 2009/10 to 2016/17. A drop in prices for food and non-alcoholic beverages, housing and utilities and restaurants and accommodation services also be attributed to the deceleration in headline inflation. Meanwhile, an increase in transport, personal care, social protection and miscellaneous goods, health and clothing and footwear prices partially offset this. On balance, inflation in Uganda remains relatively benign and is not expected to be a major concern for the central bank as it continues to provide support for the virus-stricken economy.

Namibia: Namibia's monetary dynamics tightened in March. Money supply growth decelerated for the second successive month in March falling from 10.0% y/y in February to 9.5% y/y, its lowest level in three months. With money supply growth contained, the risk of a blow out in inflation remains slim. The tight monetary environment will see inflation remain within the Bank of Namibia target range of 3% to 6%.

Morocco: Data released by Bank Al-Maghrib showed that money supply growth decelerated for the second straight month in March, coming in at 7.7% y/y compared with 9.3% y/y in the previous month. Although money supply growth softened, it remains elevated compared with 3.2% recorded in March 2020. The relatively loose monetary conditions are likely to bring with it some topside inflationary risks. For now though, headline inflation in Morocco is expected to remain lacklustre.

Kenya: Consumer price inflation in Kenya came in softer than anticipated in April, printing at 5.8% y/y versus 5.9% y/y in March. The April reading missed consensus expectation of an increase to 6.0%. On a monthly basis, inflation quickened from 0.4% in March to 0.8% in April.  The marginal fall in annual consumer prices can partly be attributed to the decision of the Energy and Petroleum Regulatory Authority to leave fuel prices unchanged in their April review. It is worth noting that headline inflation remains within the Central Bank of Kenya’s 5% (±2.5ppts) inflation target. This suggests that there is still room for the central bank to continue offering support to the economy. However, the risk to inflation remains tilted to the upside off the back of rising global commodity prices, supply constraints, and restrictions to curb the third wave of COVID-19 introduced in March, threatening food security and nutrition.

Angola/Zambia: Angola’s Minerals and Petroleum ministry on Friday announced that Angola and Zambia have signed a memorandum of understanding to conduct a two-year feasibility study for the construction of petroleum product and natural gas pipeline. The pipeline is set to transport finished petroleum products with an estimated capacity of 100k-200k barrels per day.

Although the USD staged a marked rebound on Friday, the greenback ended firmly in the red last month. The weaker dollar, driven by loose for longer monetary policy and widening twin deficits, provided some breathing room for emerging and frontier market currencies last month. For context, the trade-weighted dollar (DXY) depreciated by more than 2 % in April, paring back almost all the gains that were realised in March.

Notwithstanding the broad-based dollar weakness, a rebound in global commodity prices and improved global risk sentiment amid improved global growth prospects, Sub-Saharan Africa currencies were a mixed bag last month. Ten of the twenty-one currencies tracked by Bloomberg closed the month in the green against the USD, with the Mozambican metical (MZN) leading the gains. Despite the ongoing security threats in the country, the MZN managed to strengthen by just under 18% against the USD in April as a combination of a recovery in tourism, strong foreign aid flows and rising commodity prices supported the currency. 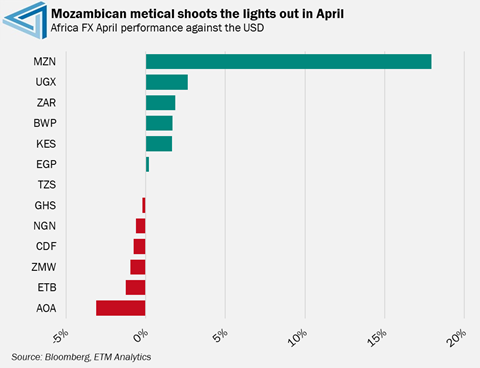 The remaining ten African currencies ended in negative territory against the USD in April, while one closed the month flat. Leading the declines last month was the Angolan kwanza (AOA), depreciating by just over 3% against the USD. The persistent decline in reserves, together with weak underlying macroeconomic fundamentals, weighed on the AOA. The Ethiopian birr (ETB) and the (ZMW) were the second and third-worst performing African currencies last month.

Ghana plans to borrow GHS 4.12bn in the second quarter of this year, according to the debt management agency’s website. The Q2 figure makes up part of the planned GHS 21.43bn, which the government seeks to raise this year to fund the projects outlined in the 2021 budget and service its existing debt obligations. Note that just over 80% of the government’s planned borrowing will go towards servicing existing debt.

A breakdown of the government’s borrowing plans showed that the debt management agency would issue GHS 11.3bn in 91-day Treasury bills this year, while a further GHS 5.5bn will be raised through the issuance of 182-day Treasury bills. The government’s issuance plan also detailed that some GHS 1.57bn will be raised through 364-year Treasury bills. The calendar showed that the 91-day and 182-day bills would be issued on a weekly basis, while the 364-day bills will be issued on a bi-weekly basis through the primary auction.

The debt management agency also plans to issue further out on the curve. Specifically, the government is expected to sell GHS 2.0bn worth of 5-year bonds and GHS 1.0bn in 7-year bonds. Bonds with a maturity of 2-years and longer are expected to be issued through the book-building method outlined in the Medium Term Debt Management Strategy. We expect that the government could announce the reopening of other existing bond issuances depending on its needs and market conditions.

Going forward, investors will continue to monitor Ghana’s borrowing closely. Note that Ghana’s debt pile has risen sharply amidst the COVID-19 pandemic as government revenues tanked and expenditure was ramped up to bolster the healthcare system and cushion the economy from the devastating impact of the coronavirus. According to data from the Bank of Ghana, the country’s debt pile reached a record high of GHS 291.6bn or 76.1% of GDP at the end of last year. 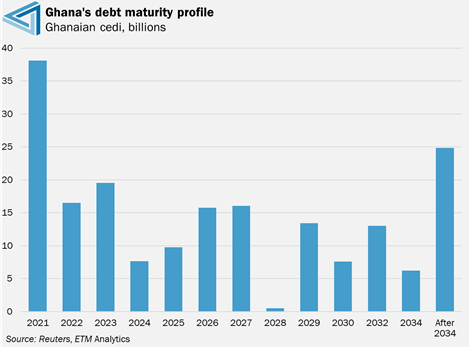 Macroeconomic: Traders expected to take a measured approach towards emerging markets at the start of May

The start of May is expected to be tentative for emerging markets as traders look to get a grasp on the broader macroeconomic environment. For all the support to global risk sentiment emanating from US stimulus plans, dovish central banks, progress on the vaccine front and elevated commodity prices, concerns over the deepening COVID-19 crisis in parts of the world and escalating geopolitical tensions between the world’s largest economic powers may keep investors on their toes at the start of May.

While signs of a strong US economic recovery has lifted global sentiment, a strong US recovery brings with it the potential for a marked rise in inflation and higher yields, which would weigh on assets that are vulnerable to rising US Treasury yields. Although global reflation bets have grown this year, the Fed has repeatedly come out to say that the inflationary pressures are transitionary and that it remains committed to maintaining its accommodative policy stance for an extended period of time.