The IMF announced it has reached staff-level agreement on a new programme for the Republic of Congo (henceforth, Congo) on 8 November. The new three-year extended credit facility (ECF) will amount to US$456mn (200% of quota). The press release doesn't mention timing, but it will presumably go to the Fund's executive board in the coming weeks, subject – we expect – to ironing out further details and completion of any (unspecified) prior actions.

The announcement, while welcome, comes as a bit of a surprise to us. First, it was not entirely clear that the authorities wanted a new programme, or needed one, although we note the press release for the recent Article IV said that "Directors welcomed the authorities’ intention to engage in discussions with the Fund on a possible Extended Credit Facility arrangement." Still, to reach this point so quickly is a surprise.

Second, is the timing. This is for two reasons. It only just follows the conclusion of the 2021 Article IV at the end of September (the staff report was published 5 October). The Board usually prefers to avoid having to meet on the same country in relatively quick succession but we think it is trying to be more flexible and pragmatic during the pandemic. Moreover, it follows the premature expiry of the previous programme (a three-year ECF approved in July 2019) in April 2021 without the first review even being completed (something that is rare, but not unique) – see here and here for background. One could imagine, in such circumstances, that there might be little enthusiasm in the Fund to agree to a new programme after the failure of the previous one. But things have changed.

We think three things have changed: the need for help due to the pandemic, the authorities’ strong ownership of the reform process and, crucially, the IMF's debt sustainability assessment.

First, the pandemic has added a greater sense of urgency and need for support, especially as Congo is one of only a few countries to have received no financial support from the Fund during the pandemic (it hasn't received any emergency RCF disbursements; although it has benefitted from DSSI and the SDR allocation). Moreover, while there does not seem to be an obvious balance of payments (BOP) need, the lack of financing gaps in the Article IV should not be taken as suggesting there are no financing problems. Rather, it reflects spending restraint given limited financing options. Congo received little financial assistance or budget support from development partners during the pandemic, while its IMF programme was off track, but the lack of financing and lower government spending will have an impact on GDP growth and poverty.

Congo's real GDP contracted by a sizeable 8.2% last year, but given growth of 4.6% was projected pre-pandemic, the 12ppts swing is even more dramatic. Moreover, Congo has had six consecutive years of negative real GDP growth over 2015-20 (averaging -5.3% pa), which could be seven after this year (the IMF projects growth of -0.2%). A recovery is, however, expected in 2022, with growth of 2.4%, thanks in part to higher oil prices. An IMF programme is also expected to catalyse additional funding from other development partners. 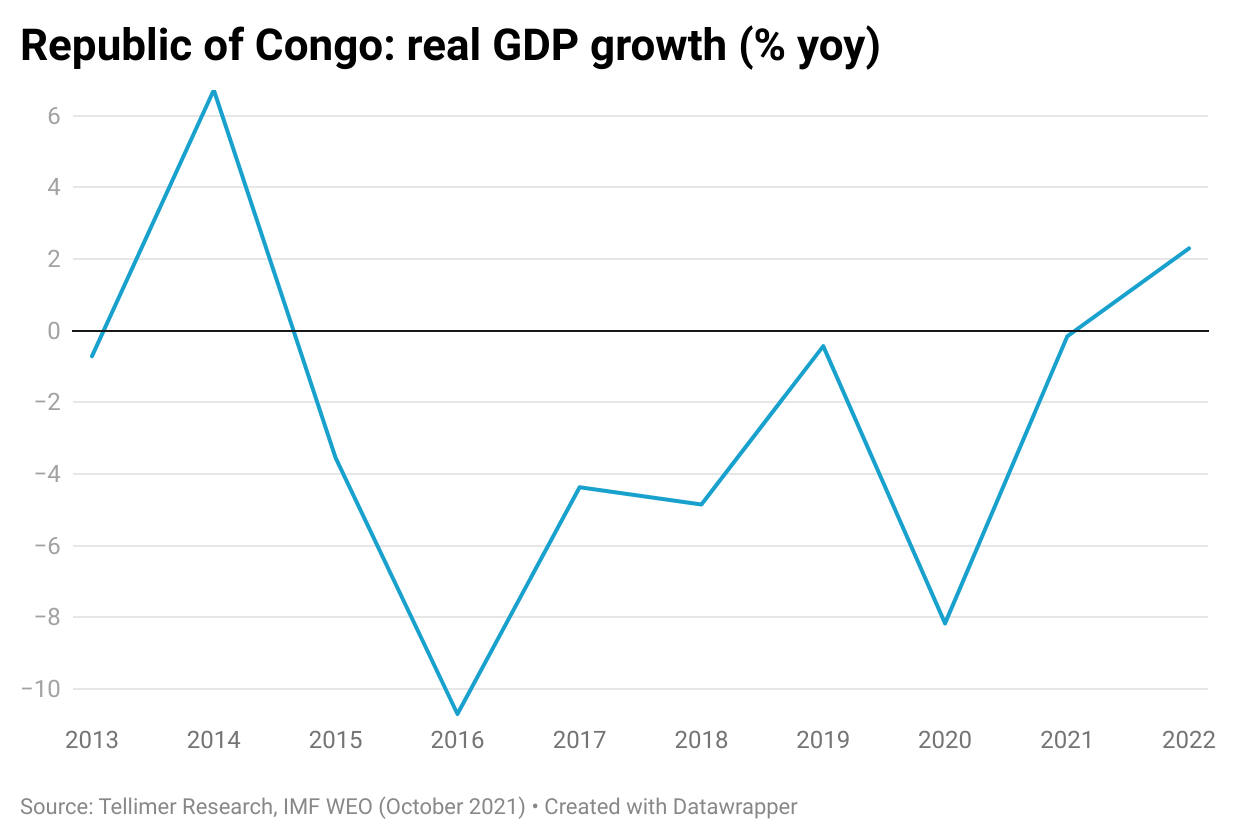 Second, despite the failure of the previous programme, largely because of delays to finalising some debt restructuring agreements, the authorities were able to make progress in advancing some key structural reforms and governance measures, such as on the anti-corruption law and public financial management, as the Article IV makes clear. The authorities also remained engaged with the Fund, receiving technical assistance despite the programme being off track, demonstrating strong ownership and sending a positive signal over its policy commitment.

Third, the IMF now concludes that Congo's public debt is sustainable, as per the press release announcing the staff-level agreement (and the DSA in the Article IV), although noting that significant vulnerabilities remain and that the debt remains in "distress", pending clearance of external arrears and the conclusion of remaining restructuring negotiations. This assessment (that debt is sustainable) is thanks to restructuring agreements that have been completed already, higher oil prices and quantitative improvements that mean fewer breaches in debt sustainability thresholds over the next five years. So, although debt was unsustainable under the previous programme, meaning restructuring was made a key programme requirement, and the programme went off track because of delays to concluding debt restructuring agreements, that is no longer the case. The debt is now sustainable and restructuring is not a requirement.

After the Covid-induced jump in public debt by some 20pp to 101% of GDP in 2020, the IMF projected public debt to fall to 84% this year in the Article IV, although this has been revised up to 94% in the press release for the staff-level agreement. The Article IV projected debt to fall further over the medium term, to below 70% in 2023 (69%), and to below 60% by 2025 (58%). Even if these projections are revised up by the same amount each year, and assuming no offsetting response, that still shows a solid downward trend; although of course, much will hinge on the external environment and, crucially, the outlook for oil prices. 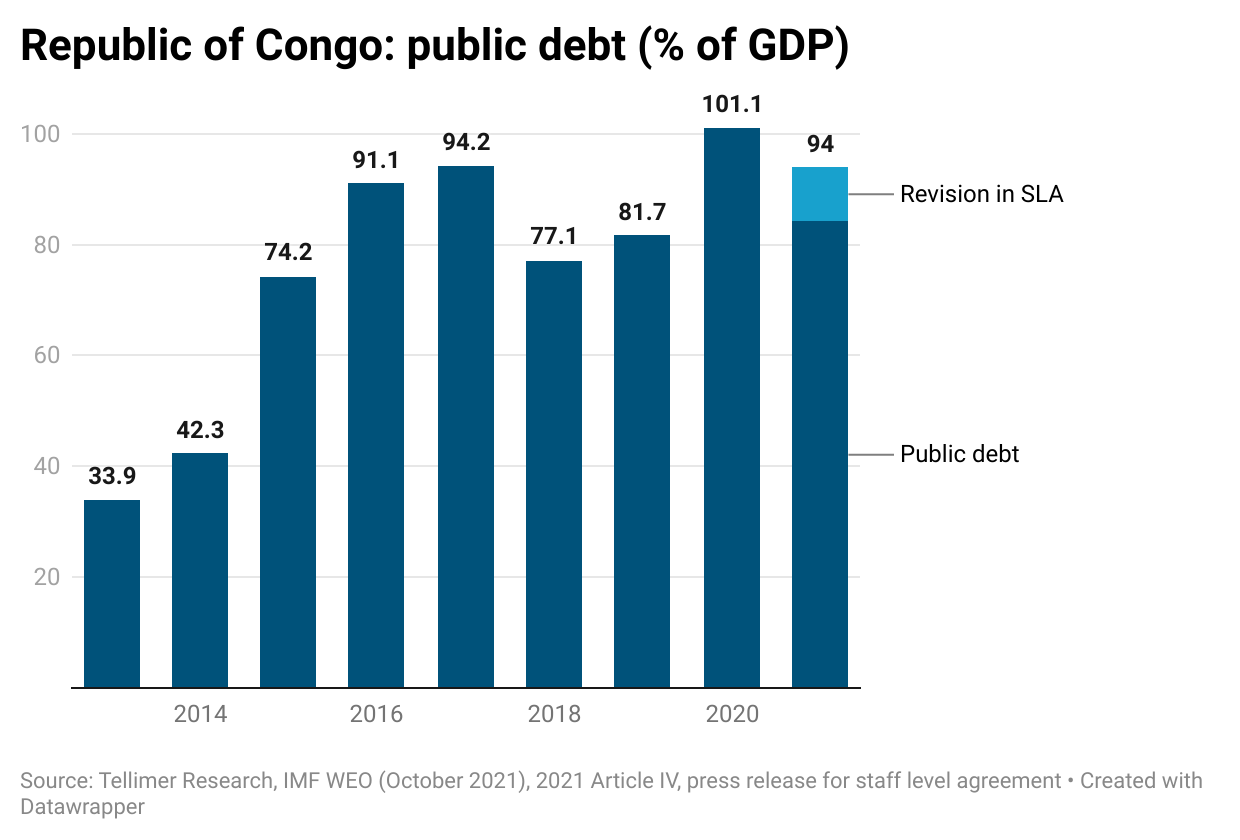 This means the debt situation – and ongoing debt discussions – have not been a barrier to a new programme, nor is resolving remaining agreements mentioned as a prior action. According to the Article IV, two of the three largest private external creditors have already restructured their debt. Based on company and press reports, we know the largest Trafigura (March 2021) and a smaller one Orion (2020) have restructured (so they are the two of the three). This means Glencore, the second largest, is the one that remains.

While we await further details on programme modalities and structural benchmarks, which will be available in the staff report if/when the programme gets board approval, the press release announcing the staff-level agreement does provide some additional information.

In terms of fiscal policy, while the overall fiscal balance is expected to move into surplus again this year (to 1.5% of GDP from -1.2% in 2020), due to higher oil prices, the IMF notes that targeting a non-oil primary deficit (which is a better gauge of fiscal sustainability) of 15.5% of non-oil GDP in the 2022 budget is appropriate. This compares to a projected 17.0% NOPD in 2021 and a pre-Covid projection of 12.1% in 2020. Fiscal measures include raising tax arrears collection, reducing tax and customs exemptions, building on reforms in tax policy and administration, and reducing transfers to SOEs.

The IMF notes that revenue mobilisation and reduced non-priority spending will support prioritising social and infrastructure spending while allowing for the gradual fiscal consolidation necessary to enhance debt sustainability.

Over the medium term, fiscal efforts should be supported by a review of the fiscal regime in the oil sector, a more significant removal of VAT exemptions and a streamlining of other tax expenditures, improved procurement practices, and more effective public investment management. The domestic arrears clearance strategy is also crucial.

Meanwhile, advancing reforms in governance, transparency and anti-corruption will be essential for improving the effectiveness of public spending, the business environment and economic confidence.

A new Fund programme, with debt now sustainable, and with seemingly little risk (under the baseline) of the need or requirement for a Common Framework treatment, ameliorating the fear this could PSI the bond (even if it is de minimis), along with strong fiscal effort and supported by governance reforms, might be enough to prompt a re-rating of the bond, which trades wide in yield terms to other SSA names.

However, its high yield also reflects an illiquidity premium given the small size of the remaining issue (US$254mn outstanding now after the June amortisation payment), non-index status (because of its small size) and its low rating (Congo is rated Caa2/CCC+/CCC). Moreover, after the previous programme, bondholders may want to see more evidence of implementation and a successful first review (at last) before turning more optimistic. 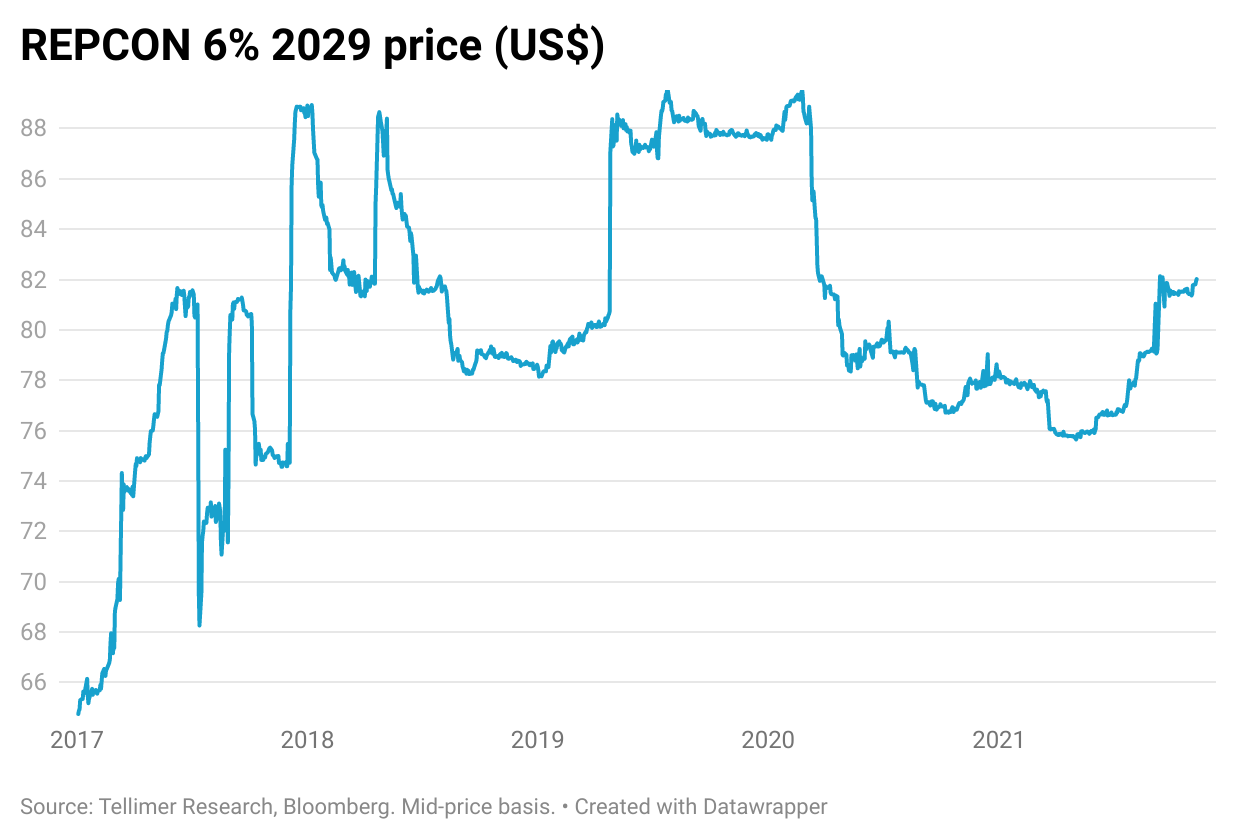