Market expectations of the Fed’s interest rate path have adjusted sharply over the past six weeks, bolstered by the relatively hawkish speech by Fed Chair Jay Powell at the Fed’s Jackson Hole symposium on 26 August and the surprisingly high inflation print this Tuesday.

With core CPI rising from 5.9% to 6.3% yoy and from 0.3% to 0.6% mom in August versus the 6.1% yoy and 0.3% mom consensus, markets have finally come around to the idea that the Fed may have to raise rates significantly above its estimated “neutral” rate of 2.5% and keep them there for a prolonged period to bring inflation back to the 2% target – especially given the uncertainty over the speed and extent of the disinflationary path.

The market is now projecting the fed funds rate will rise to 4.25% by the end of the year, up from 3.3% at the end of June, 2.4% at the end of March and 0.8% at the beginning of the year. This massive repricing is both necessary and extremely belated, in our view. We wrote at the beginning of April that markets might be underpricing the extent to which the Fed would need to tighten to tame inflation and prevent a de-anchoring of expectations. 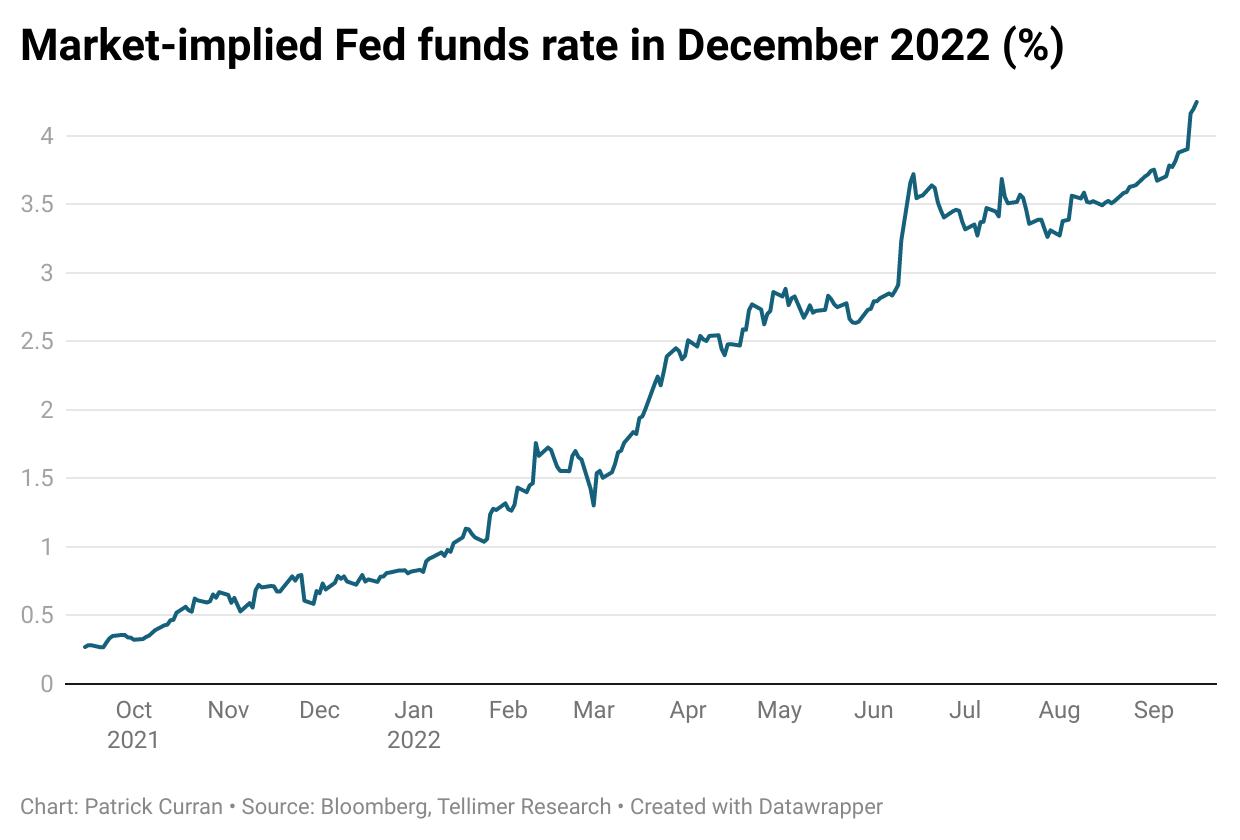 The shape of the fed funds futures curve has also adjusted, with markets now pricing in a terminal rate of 4.45% in March 2023 followed by 45bps of cuts to 4% by December 2023. This compares to expectations at the end of July for a 3.3% terminal rate and a slightly sharper 60bps decline to 2.7% by end-2023. The new market-implied rate trajectory is more closely aligned with the Fed’s forward guidance, in our view. 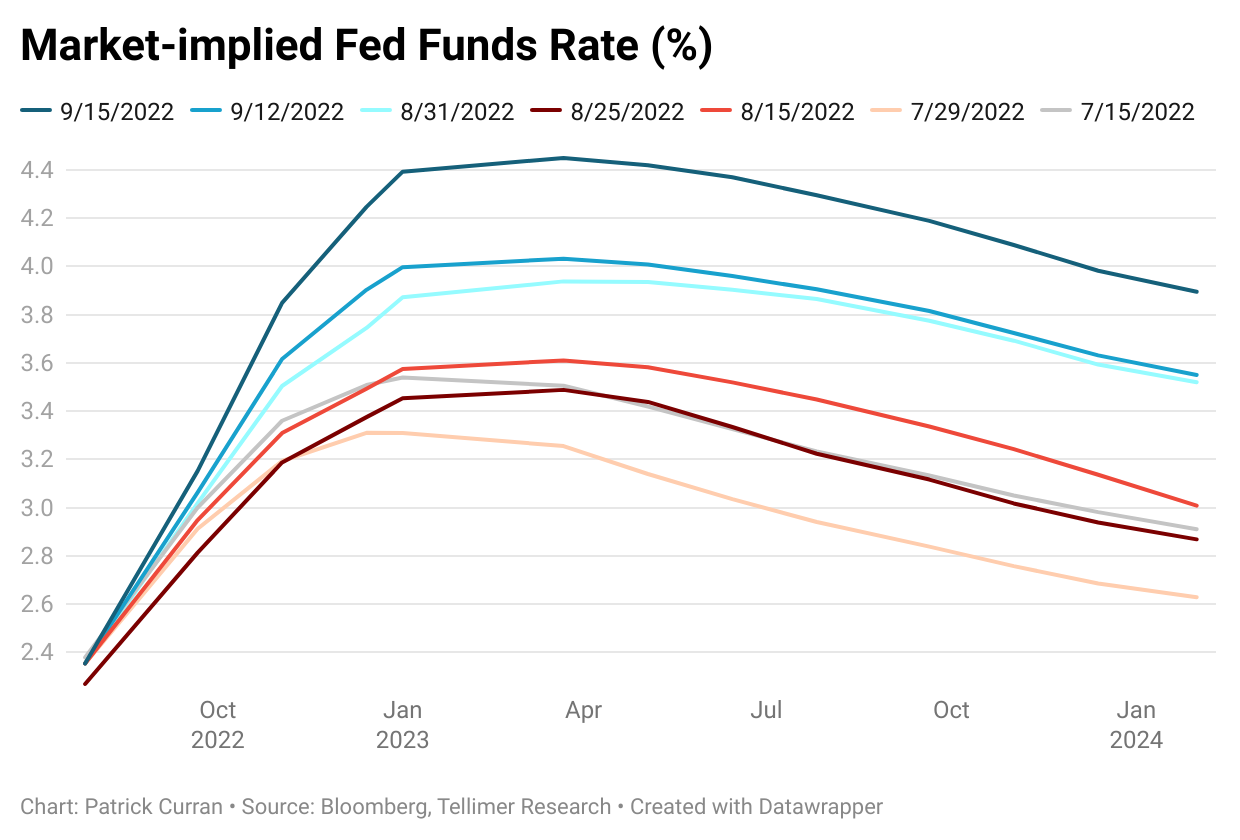 We warned in mid-July that market perceptions that the Fed would cut rates in response to a US recession were misguided, arguing that it would continue to hike rates until there is a sustained fall in inflation irrespective of the growth outlook and that inflation data would therefore be the key signal for Fed policy. Indeed, that was the prevailing theme of last month’s Jackson Hole symposium, and markets finally seem to have come around to that view, bolstered by this week’s inflation surprise.

As a result, confidence seems to be decreasing in the Fed’s ability to achieve a 'soft landing'. While the Atlanta Fed’s GDP Nowcast has turned positive after dipping into negative territory for most of July, the probability of a recession has risen to 50% over the next 12 months, according to Bloomberg’s economic survey, from 40% at the end of July. That said, only 11 of the 76 analysts surveyed by Bloomberg are projecting a recession as their base case in 2023, at odds with the negative commentary. And, interestingly, the Fed’s Christopher Waller appeared to play down recession risks in a recent speech. 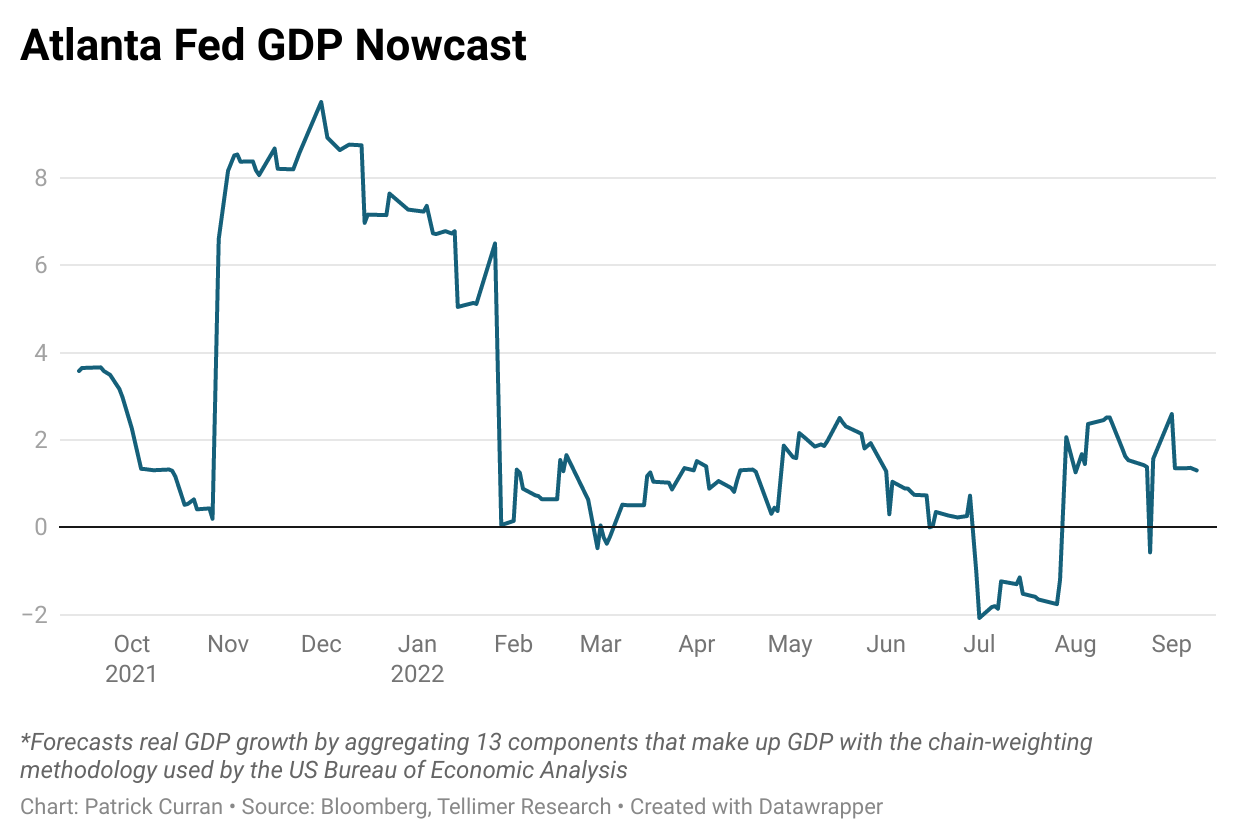 At the same time, market confidence in the Fed’s ability to tame inflation has not flagged, with the 5y5y breakeven rate squarely in the middle of the 2-2.5% range it has traded in since the beginning of 2021 and not budging since this week’s inflation surprise. This shows that inflation expectations remain well-anchored, with markets showing confidence that the Fed will do what it takes to stabilise prices, even if that means sending the US economy into recession.

Tomorrow’s release of the University of Michigan Inflation Expectations survey will show whether survey data is similarly subdued, with 5-10 year inflation expectations at a slightly higher but still relatively low 2.9% last month. 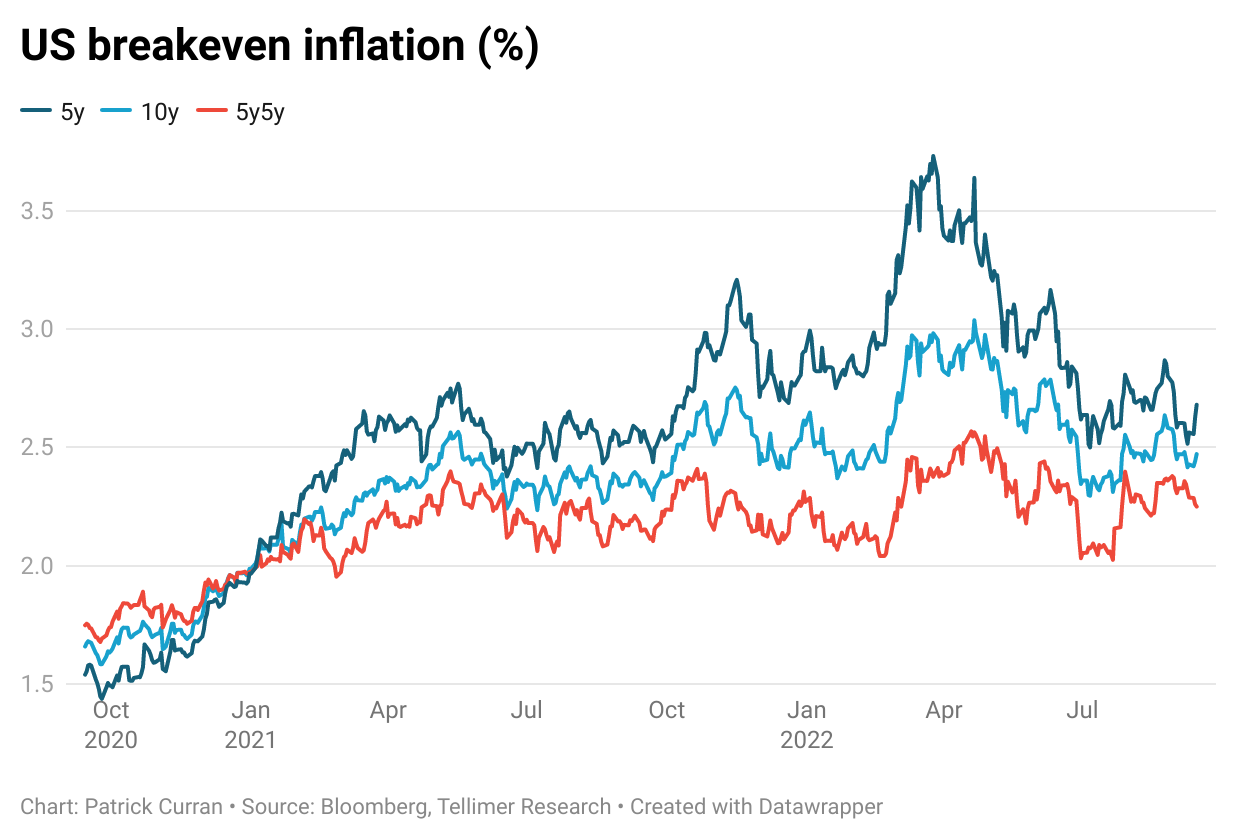 With market pricing now more aligned with the Fed’s forward guidance and more accurately reflecting, in our view, the likelihood that rates will have to rise significantly above the “neutral” policy rate and remain there for a prolonged period to tame inflation, the risk of another sharp repricing has diminished. That said, while the terminal rate of c4.5% priced by markets in Q1 23 may be sufficient if underlying price momentum begins to fade, there is a risk that the Fed will have to hike even further if core inflation continues to surprise to the upside.

Further, with the market still pricing in rate cuts beginning in Q2 23, there may still be room for repricing on the longer end of the fed funds futures curve. In other words, markets have still not fully digested the forward guidance and, in our view, the economic reality that the Fed will not and cannot cut rates until there is evidence of a significant and sustained fall in inflation, and that a recession is unlikely to prompt a policy reversal unless that decline is sufficiently entrenched and accompanied by a weakening labour market, evidence of which is still scant.

The next FOMC policy announcement on 21 September will provide updated guidance on the path ahead, including the publication of the quarterly Summary of Economic Projections. While the consensus is still for a 75bps hike, markets are now pricing in an 81bps hike from just 69bps at the end of August, implying the alternative is an even more aggressive 100bps hike rather than a more moderate 50bps hike. That said, as several FOMC members have been at pains to emphasise in recent weeks, the quantum of rate hikes at each meeting is less important for overall financial conditions than where the rate ultimately ends up and how long it stays there. While the markets are now pricing in a higher terminal rate, they may still be underestimating how sticky that rate will be.

With interest rates in developed markets now expected to go higher and stay there for longer, financial conditions for EM will remain tight, and could well tighten further. Countries that have large gross external financing needs and are locked out of the market will be especially vulnerable, with spreads exceeding 1,000bps in 13 countries (20% of the Bloomberg EM Sovereign Index – down from 18 and 27% in mid-July). Our external liquidity index, last updated in May, flagged Sri Lanka, Ethiopia, Tunisia, Laos, Kenya, Bahrain, Bolivia and Turkey as particularly vulnerable, while a simpler plot of GEFR versus spreads in late June flagged Egypt, El Salvador, Ethiopia, Ghana, Kenya, Pakistan and Tunisia.

Of course, some of these are already well known, with Sri Lanka in default, Ethiopia, Ghana and El Salvador skirting default, Pakistan and Kenya in IMF programmes, and Egypt and Tunisia seeking IMF support. While markets are keenly focused on parsing which of these countries is most likely to follow Sri Lanka’s lead into default, moving forward, attention will shift towards which countries, beyond this widely accepted and understood tier of vulnerable ones, are most likely to join the fray of distressed nations if global financial conditions remain tight for a prolonged period. This is an area for further research, with our updated external liquidity and debt sustainability scorecard updates after the IMF Annual Meetings next month likely to provide some clues.

Overall, there is now less of a risk of a disorderly repricing of the Fed’s interest rate trajectory, which reduces the risk of another sharp leg down for EM asset prices. However, if inflation continues to surprise to the upside, then financial conditions may need to tighten further. And, with markets now expecting financial conditions to remain tighter for longer, it is unlikely that there will be a considerable improvement to broader EM risk sentiment in the months ahead. As such, countries with high GEFR may find themselves locked out of the market for an even more prolonged period, forcing them to scramble for alternative financing sources to avoid a balance of payments/debt crisis. Against this backdrop, we continue to think that the path for EM assets will be perilous in the months ahead.

High-yield EM credit claws back losses but path ahead is perilous, September 2022

The year so far in EM and frontier fixed income, July 2022

Recession fixation is not reflected in forecasts and won’t impact rates yet, July 2022

What investors are thinking: Takeaways from our UK roadshow, June 2022

EM credit sell-off unlocks pockets of value, but more pain could be in store, June 2022

What rising US rates mean for EM assets, April 2022