The knock-on effects of Russia’s war on Ukraine, including international sanctions and retaliation by Russia through weaponisation of its energy exports, are key downside risks to sovereign ratings in central and eastern Europe in 2023.

The energy crisis, made worse by the war, has accentuated inflationary pressure and severely weakened the post-pandemic recovery as a significant turnaround in prospects for economies of the central and eastern Europe (CEE) region, notably those most reliant on Russian oil and gas. CEE countries will likely pay a higher price for energy security despite sufficient gas storage this winter.

The risk of stagflation has increased in parts of the region, particularly within energy-intensive and open economies such as the Czech Republic, Hungary and Slovakia.

The economic slowdown coupled with tighter domestic and global monetary conditions are narrowing fiscal room for manoeuvre after a long period of low yields, mitigated, only in part, by more resilient debt profiles and deeper capital markets. 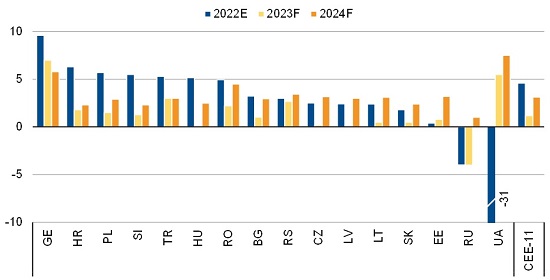 The urgency of more investment in alternative energy sources and in defence under context of the Russia-Ukraine war will pressure public finances as will adverse demographics in the medium term. Success in consolidating public finances will help determine sovereign ratings trajectories, partly through the steady absorption of EU funds, which limits recourse to more national borrowing.

Our latest assessments in CEE include a Negative Outlook for the sovereign ratings of Slovakia (A+), Hungary (BBB+), the Czech Republic (AA) and Poland (A+) due to a weakened economic outlook amid higher policy uncertainty.

At the same time, the Stable Outlook assigned to ratings of Slovenia (A), Bulgaria (BBB+), Romania (BBB-), Estonia (AA-), Georgia (BB), and Serbia (BB+) reflects less severe economic exposures to repercussions of the war, if not net gains for the case of Georgia. Positive Outlooks for Latvia (rated A-) and Lithuania (A) are supported by modest public debt. Croatia represents an outlier of the region, as reflected in our ratings upgrade from BBB- to BBB+ in July due to the formalisation of entrance to the euro area from 1 January 2023, which provides Croatia near term with reserve-currency status.

Russia’s economy will contract 4% in 2023, after a 4% contraction estimated for 2022. Ukraine’s economy will shrink 31% this year followed by growth of 5.5% next year, although much rests on outcomes of the war. Turkey’s growth will likely slow to 3% in 2023 from an estimated 5.3% this year.

Across the region, inflation is likely to run higher for longer even as it declines off peaks, raising the risk of wider second-round constraints on economic activity.

Large and persistent external shocks alongside wider external deficits and the strength of the dollar this year have placed downside pressure on regional currencies and foreign-currency reserves. Overall, official reserves of most CEE economies are presently sufficient to bridge a current period of excessive market volatility, in most cases covering external debt maturing over the next year. Euro-area countries continue to benefit from the euro’s reserve-currency status.

We see rising social and political pressures across the region next year. While CEE governments have absorbed much of the extra costs facing households and businesses from higher energy prices while coping with an arrival of Ukrainian refugees, the political impact of the war may materialise in gains for populist groups in upcoming elections.

Bulgaria is one country experiencing renewed political instability, which might delay plans for its adoption of the euro. Slovakia also sees growing political uncertainties as the government lost its majority in parliament. Serbia and Georgia face a difficult task in balancing their relations with Russia with economic and institutional convergence objectives with the EU.

The introduction of ‘rule of law conditionality’ in EU development funding has put the EU in a better position to influence its member states by cutting or withholding financial support to countries where policies are deemed by EU institutions as detrimental to democratic values.

The CEE region remains heavily reliant on EU fund transfers (Figure 2) so unresolved disputes over the rule of law in Hungary and Poland cloud their economic and fiscal outlooks and serve as a warning to other CEE nations with comparatively higher institutional risk, such as Romania and Bulgaria. The dispute looks more intractable in Hungary where governance standards continue to slip amid frequent changes in government regulations.

The geopolitical importance of the CEE region has increased for the EU and NATO with possibly important economic benefits for the region. A recent example is the EU and US support for a so-called “Three Seas Initiative,” a socio-economic group of twelve EU countries (CEE-11 + Austria) centred on the development of energy, transport, and digital infrastructure.