Some profit taking on global stock markets as well as the broader need for a market correction to clear out stale short USD positions has been enough to drive a rally in the USD. It is not a USD rise with much underlying momentum at this point, but it is enough to help squeeze some short USD positions for the market to better exhibit the conviction of those believing the USD must still correct weaker through the months ahead. The Fed will persist with its loose policy, and the Biden administration is committed to introducing more stimulus, all against a backdrop of an expanding credit cycle. All of this will detract from the USD's performance.

Nigeria: PMI data published by Markit on Tuesday revealed that Nigeria’s private sector posted another solid expansion in April, underpinned by further growth in output and new orders. Specifically, Nigeria’s economy-wide PMI reading was unchanged from the previous month at 52.9 in April. In anticipation of growth in demand, firms ramped up their hiring last month. Inflation pressures continued to rise, pushing the overall rate of inflation to the highest level since the series began. Markit said that sentiment regarding the year ahead remained upbeat, with plans to expand operations and invest in marketing fuelling hopes. That said, risks pertaining to the COVID-19 pandemic continue to dampen the outlook.

Mozambique: Mozambique’s PMI rose above the 50-point neutral mark for the first time since the COVID-19 pandemic began in April. Specifically, Mozambique’s PMI gauge came in at 51.3 in April, up from 49.1 in March. The April reading signals the first improvement in business conditions since the economy was hit by the COVID-19 outbreak and measures were introduced to contain the spread of the virus. Looking ahead, business confidence regarding future output climbed to a 16-month high, but employment numbers continued to fall. On balance, the April PMI report points to a recovery in economic activity in Mozambique. Expectations are that Mozambique will likely rebound from its recession this quarter as activity rebounds with COVID-19 restrictions being eased. Base effects will also play a role in GDP returning to growth territory in Q2 2020

Morocco: Data published by the Direction de la Statistique showed that unemployment in Morocco increased in the first three months of 2021. Morocco’s unemployment rate rose from 12.2% in Q4 to12.5% in Q1. The Q1 unemployment reading was higher than the 10.5% recorded during the same period in 2020. According to the High Commission for Planning of Morocco, the rise in unemployment is directly related to the impact of the COVID-19 pandemic on the country’s economy. Unemployment is most prevalent amongst university graduates, with the rate sitting at 19.8%. Job losses were highest in the agriculture sector (231k) and the industrial sector (48k). Meanwhile, jobs were created in the service sector, with 42k new job opportunities created and 39k being added in the construction and public works sectors.

Tanzania: Money supply growth quickened notably in March, coming in at 6.8% y/y compared with 4.9% y/y in February. The March money supply print marked the fastest pace of growth in seven months. Compared to the same period in 2020, money supply growth remains relatively anchored, and this suggests that Tanzania’s monetary environment remains relatively tight. As such, inflation should remain contained in the coming months.

Tanzania: The latest monthly economic review by the central bank showed that earnings from the export of gold rose to $3.03bn in the year through to March from $2.32bn in the same period a year earlier. The notable increase in gold export earnings is attributed to the elevated price of the yellow metal and broad-based dollar weakness, which has driven investors to other haven assets, including gold. The increase in foreign earnings is likely to bolster dollar liquidity domestically, which will help offer some support to the local currency.

Nigeria: The ongoing security crisis that has claimed hundreds of lives in recent weeks has seen President Muhammadu Buhari come under mounting pressure from critics and allies. According to the Council of Foreign Relations, almost 600 civilians were killed across the country and at least 406 were abducted by armed groups in April. Investors should pay attention to security developments as they affect domestic sentiment.

Although the Egyptian pound (EGP) has kicked off the new month on the back foot, the broader bias in the currency remains bullish. While the EGP weakened for a second straight session against the USD on Tuesday, the currency remains pinned near a 2-month low recorded at the end of last month. Notwithstanding yesterday’s notable losses, the EGP is still 0.37% stronger against the greenback on a year-to-date basis.

The EGP’s resilience is partly a function of the country’s relatively robust foreign currency reserves, which bolster the central bank’s ability to shield the currency from external shocks. Data from the Central Bank of Egypt revealed that Egypt’s reserves rose to $40.3bn in March, marginally higher than the $40.1bn recorded during the same period in 2020. Although Egypt’s reserves are anchored below pre-crisis levels, the reserves are sufficient to cover more than seven months of imports.

Additional support for the EGP is stemming from strong foreign inflows and broad-based dollar weakness. Egypt’s higher real rates are key factors underpinning the rotation into the country’s domestic assets. Looking ahead, while a number of risks persist, Egypt’s fundamentals are sounder than many of its African peers. Therefore we expect Egyptian assets to remain a favoured destination for foreign investment flows.

Inflation risks have intensified recently as the combination of soaring commodity prices and supply shortages worsen. Companies surveyed by Bloomberg have warned that supply shortages and logistical blockages may force them to raise prices further. Moreover, inventories of key inputs such as semiconductors, steel, lumber and cotton are tight and have resulted in record backlogs and higher prices for European and US manufacturers.

Manufacturers noted that they are having to pass on the higher input costs onto retailers and consumers. Given how high global money supply is following the aggressive shift in monetary policy last year to help cushion the blow of the pandemic, the exogenous price shocks caused by soaring commodity prices and logistical logjams is seen as being inflationary as consumers are able to absorb the price increases. Recall that in an environment of tight monetary conditions, an exogenous price shock would be recessionary rather than inflationary as the substitution effect would take effect.

The big question now is whether the acceleration in global inflation proves to be transitory or permanent. While developed market central banks maintain the view that the price shocks stemming from elevated commodity prices and the supply chain backlogs are temporary, the market has raised its inflation expectations. This is reflected by the rise in break-even rates the world over. The rise in inflation expectations is clear when looking at the US 2-year break-even rate, which has trended higher in recent months. For context, the US 2-year break-even rate has climbed 168bps since October last year to sit at 2.82%. 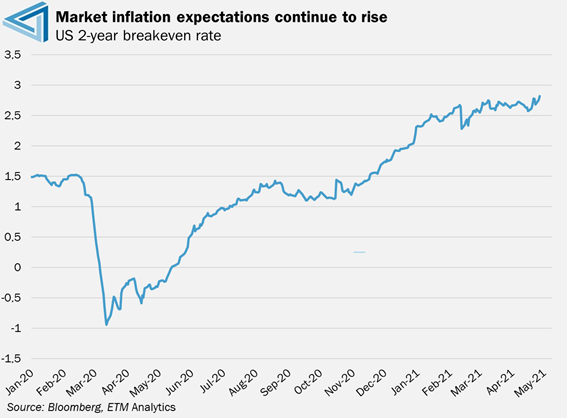 The rise in global inflation expectations will undoubtedly have ramifications for African bonds, especially if US Treasury yields continue to rise. It is worth adding that while demand-side inflationary pressures in Africa remain depressed given the economic impact of the virus, heightened fiscal risks and other idiosyncratic challenges are driving up inflation in a number of Africa countries. As such, shorter-dated bond yields in African countries facing high inflation risks are expected to remain elevated going forward.

South Africa’s TransUnion Consumer Credit Index (CCI) improved to 64 in Q1 2021, a record high as it increased from 59 in Q4 2020. Such a high score suggests that consumer credit health is improving at the fastest pace on record, however, there are some caveats to this assessment.

The last time the CCI improved this strongly was after the 2008/09 financial crisis, suggesting it reflects recovery from deep distress rather than outright household strength. Consumer borrowing and repayment behaviour remained reflective of recovering rather than deteriorating household financial health, while incomes continued to grow in Q1, and very low interest rates continued to support credit affordability.

The other caveat to take note of is that the index does not illustrate the massive level of income inequality. Many households are better off, but many are under pressure and may have experienced a worsening of their credit situation.

The CCI can be used as an indicator of economic activity and retail and wholesale sales growth. The pandemic distorted this relationship, but even adjusting for this we see that the index still points to some stabilisation and even growth in sales volumes going forward. 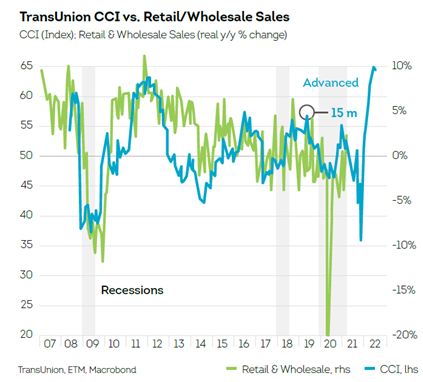