In a recent note, we examined the extent of non-resident holdings of domestic government debt. In general, non-resident holdings have declined in recent years across EM and FM, reducing the risk of capital outflows, but also potentially signalling increased difficulties attracting foreign inflows to domestic debt. Meanwhile, concerns over a potential taper tantrum could make it more difficult to issue external debt, with relatively soft EM and FM issuance so far this year.

While some major EM, like South Africa, have deep and robust non-bank financial sectors, most smaller EM and FM do not. As such, if external financing dries up the domestic banking sector must foot the burden of financing the government. This note will explore how government reliance on the banking sector has evolved over time across 60 emerging and frontier markets, and the associated implications for government financing and private sector credit growth.

Assuming zero financing of the budget deficit from foreigners or the non-bank financial sector, the government can rely either on domestic banks or the central bank to finance its budget. Countries with robust banking sectors may be able to run large, domestically financed budget deficits for an extended period without worrying about financing drying up.

However, countries with limited banking sector depth and/or with a large proportion of bank assets already invested in government securities may not have space to borrow much more from banks. If domestic banks are unwilling to fund the budget they can always be coerced (especially, but not limited to, countries with a preponderance of state-owned banks), but ultimately excessive reliance on the banking sector will crowd out private sector borrowing and reduce growth.

Alternatively, the government can rely on the central bank (either directly via monetisation of the deficit or indirectly via liquidity support to domestic banks) to finance the budget when other sources are not forthcoming. However, monetisation can only last so long before it stokes runaway inflation (this will be the subject of a future piece), and the perception of fiscal dominance can undermine central bank independence and hard-earned credibility (already so fragile in many EM and FM).

Banking sector assets-to-GDP is a simple measure of the depth of the domestic banking sector. Using IMF IFS data on “other depository corporations” (eg excluding the central bank), we find wide variation across countries, ranging from bank assets of just 26% of GDP in Tanzania (mirroring low ratios across much of the continent) to 612% of GDP in Bahrain (mirroring other financial hubs in the Middle East and elsewhere).

Next, we look at the banking sectors' net claims on the government relative to its total assets. The higher the ratio is in both absolute terms and relative to historical norms (here we look at pre-Covid levels and the 10yr average), the less likely the sector is able to finance more government spending without crowding out private sector borrowing.

Putting these three factors together (banking sector assets/GDP, net claims on government as % of banking sector assets, and change in net claims on government relative to history), we can identify which countries are at the greatest risk of running out of room to borrow from domestic banks. Countries further up and towards the right, and with smaller bubbles, are most vulnerable. 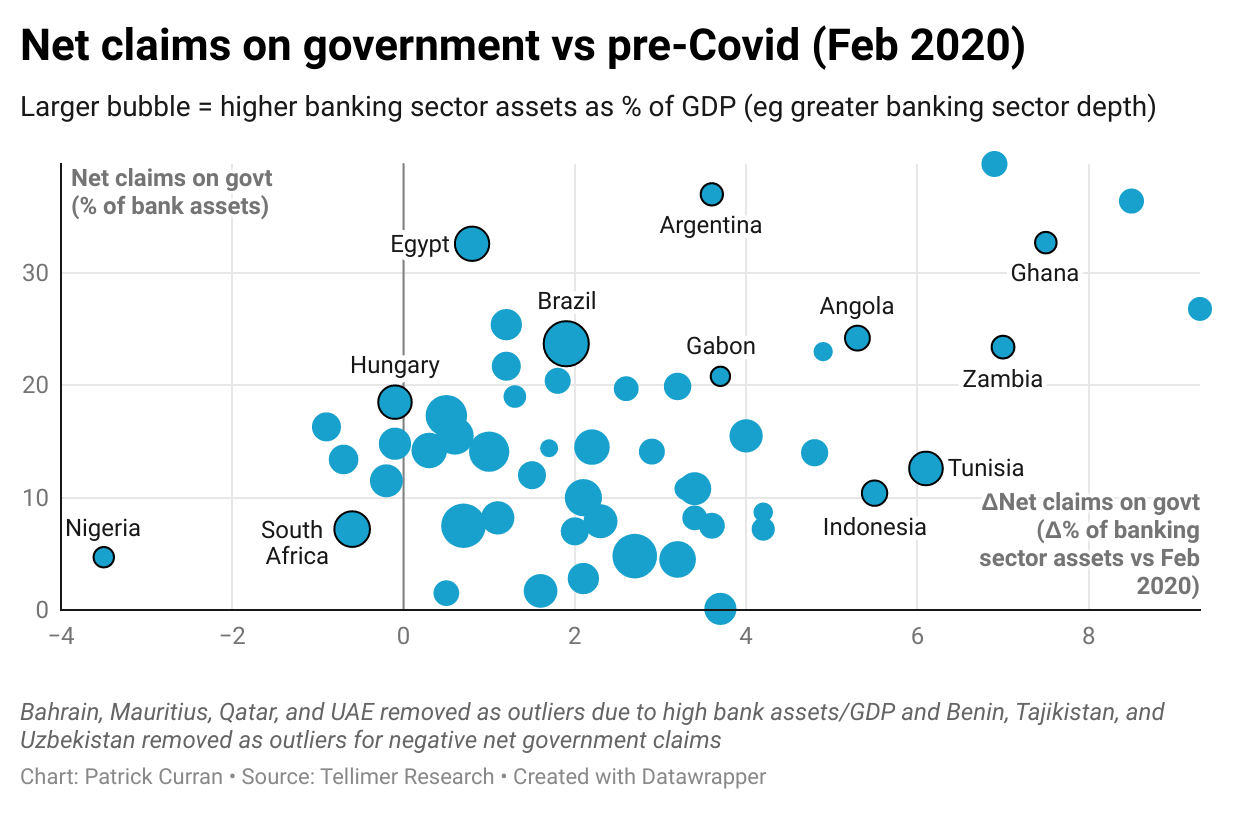 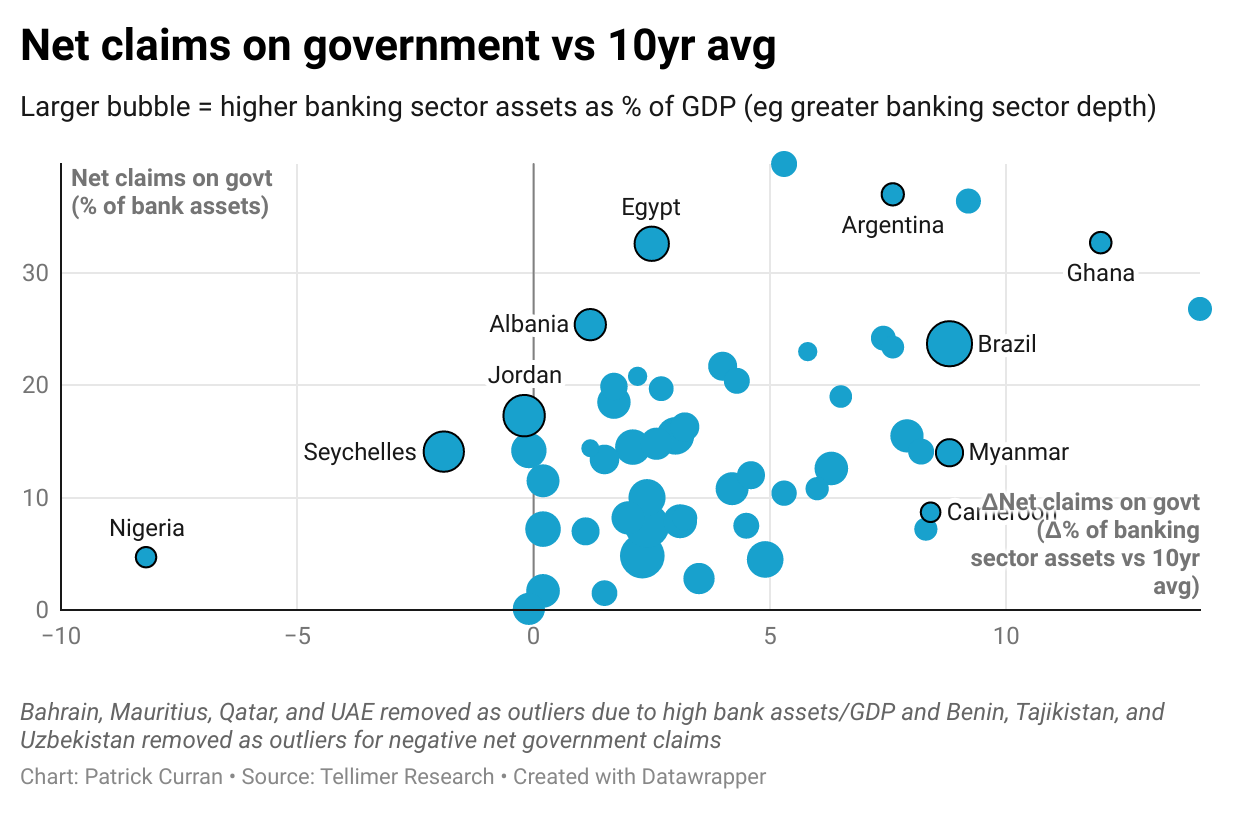 Two separate scatterplots compare current net claims on the government versus either pre-Covid levels or the 10yr average (you can hover over bubbles to interact when viewing online). Both plots flag (in alphabetical order) Angola, Argentina, Ghana, Pakistan, Sri Lanka, Uganda, Ukraine, and Zambia as particularly vulnerable, meaning those governments risk crowding out private sector borrowing if they are unable to secure alternative sources of financing.

The size of each country’s budget deficit in the coming years will also be a key determinant of how long the banking sector can continue financing the government. In the chart below, we divide the stock of bank assets not already lent to the government by the average annual budget deficit from 2021-26 (based on April 2021 IMF WEO projections) to determine how many years the banking sector can finance the government assuming no increase in assets and no other sources of financing.

While most countries should be able to finance a material portion of their budget externally or via other domestic sources (like the non-bank financial sector or the central bank), normalising in this way provides a useful illustration of whether or not the domestic banking sector is deep enough to withstand government borrowing at the current pace without negative repercussions. Echoing earlier conclusions, Ghana, Sri Lanka, Uganda, and Pakistan show up as particularly vulnerable, while Nigeria, Romania, Suriname, and Kenya join the list due to relatively shallow banking sectors and/or high budget deficits.

Lastly, we express the same indicator in terms of years of borrowing until net claims on the government reach their 10yr max as a % of bank assets. This is perhaps a more relevant indicator for the risk of private sector crowd out, with banking sectors already holding record amounts of government debt (eg showing up as a zero on the chart) likely needing to ration credit to meet any further increases in borrowing needs. With 14 of the 60 countries already at their 10yr max as a % of assets, and another 14 within 1 percentage point of it, the risk of crowd out appears high across a majority of the sample.

Bottom line: Risk of private sector crowd out is rising in many smaller EM and FM

Generally speaking, greater reliance on the banking sector has increased the risk that private sector borrowing will be crowded out by elevated post-Covid budget deficits. A hard stop in foreign financing (such as a potential taper tantrum) would accelerate that trend, especially for countries without a robust non-bank financial sector, and will increase pressure on central banks to monetise the deficits at the expense of rising inflation (the subject of an upcoming piece).

Countries that face financing constraints could be forced into an early withdrawal of post-Covid fiscal stimulus to rein in the budget deficit and reduce financing needs, or otherwise risk exacerbating risks to debt sustainability, growth and inflation. Angola, Argentina, Ghana, Pakistan, Sri Lanka, Uganda, Ukraine and Zambia seem to be the most vulnerable, and we will continue to monitor their fiscal performance and financing plans with interest in the coming months.