It appears that bond markets are pricing in major central bankers slowly winning the fight against inflation and inflation expectations. Yields across core bond markets slumped yesterday following some very hawkish rhetoric from the likes of Fed Chair Powell, ECB President Lagarde, and BoE Governor Baily. Powell said yesterday at the ECB’s conference that he will risk a US recession to bring price pressures under control, while Bailey and Lagarde made similar statements regarding doing whatever they can to contain inflation. As a result, US breakeven rates have now unwound all of their gains for 2022 so far.

Botswana: De Beers, in a statement yesterday, announced that it had agreed with the Botswana government to extend negotiations on new terms for diamond sales by one year to 2023. While no reason was provided for the extension, De Beers said that the two parties had made “further positive progress towards a new agreement being made in the first half of 2022.” Botswana’s mines account for around two-thirds of De Beers’ annual rough diamond production. The talks are historically a closely guarded affair, with Botswana using its control of the mines to push for more concessions from the diamond group. The latest round of negotiations suggests that President Masisi wants more access of the diamond value chain beyond rough diamond mining and polishing and greater citizen empowerment.

Egypt: Taking advantage of a recent pullback in prices, Egypt yesterday booked the most wheat in a tender in at least a decade to bolster stockpiles as the war in Ukraine disrupts global supplies. Bloomberg data showed that the purchase of 815k tons was the largest since 2012 and comes on the back of a recent slump across grain futures as commodities were dragged down by the recessionary worries hanging over financial markets. Chicago wheat has retreated more than 30% from a record reached in the wake of the war in Ukraine. That said, the war has heavily disrupted the wheat trade, and prices remain historically high, straining importers’ budgets.

Egypt: To bolster food security following the fallout from the coronavirus pandemic and, more recently, the war in Ukraine, the World Bank has agreed to provide Egypt with $500mn in development funds. According to Egypt’s international cooperation ministry, the funds will primarily support the country’s wheat purchases to help the government maintain a strategic reserve and utilize investments made in raising the country’s grain storage. Since the war in Ukraine began, the Egyptian government has already ramped up wheat purchases from domestic farms and trialed wheat substitutes to counter the supply shortfall. The support from the WB will further ease some pressure on Egypt, which uses these commodities as the cornerstone of a bread subsidy program used by about 70% of its population.

Kenya: The much-needed $239mn funding from the International Monetary Fund could potentially be unlocked next month following a review of Kenya’s performance in the current IMF lending programme. The funding is part of a $2.34bn extended fund facility and extended credit facility deal with the IMF reached in April last year. According to the IMF’s resident representative in Kenya, the current review was “progressing well,”  and the IMF board is expected to meet in “mid-July” to complete the assessment. The representative added that “Kenya is on track to meet its fiscal objectives under the programme, and strong tax performance this year is supporting resilience in the face of global shocks.” Meanwhile, Kenya’s Finance Minister Ukur Yatani has downplayed the urgent need for the $239mn, saying that the timing of the completion of the review was not crucial, as long as the government could access the funds at some point. Yatani added that the government usually makes adjustments if the funding it had planned to obtain during the course of a given financial year does not materialize. Yatani stopped short of specifying if the government was banking on the $239mn in its current fiscal year, which ends June 30.

Democratic Republic of Congo: The World Bank has approved $750mn in funding for the DRC, including its first direct budget support, in more than 15 years. The funding includes a $250mn budgetary grant for economic governance reforms and $500mn almost entirely comprised of concessional loans for transport and digital connectivity between the southern Kasai region and Congo’s east. According to the World Bank, the budget support is “a turning point in the partnership.” Note that due to concerns about corruption and transparency, the World Bank had long been reluctant to fund the government directly.

Forex: Egyptian pound is among the worst-performing African currencies on a year-to-date basis

The Egyptian pound is among the worst-performing African currencies against the dollar this year. For context, the pound has depreciated by almost 20%, making it the third-worst performing African currency in 2022. Only the Malawian kwacha (-20.29%) and the Ghanaian cedi (-22.34%) have fared worse. Much of the year-to-date losses can be attributed to the more than 15% currency devaluation in March as the Central Bank of Egypt (CBE) moved to combat external imbalances magnified by the impact of the war in Ukraine. The war has left Egypt facing higher costs for its substantial wheat import needs, a loss in tourism revenue from Russian and Ukrainian visitors to Red Sea resorts, and aggravated its vulnerability to capital outflows. 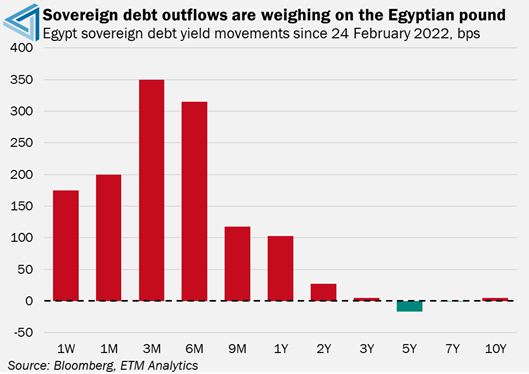 In addition to the war in Ukraine, the external backdrop has become more challenging as global financial conditions tighten as a result of interest rate increases in advanced economies. While substantial inflows from Egypt's Gulf allies have helped limit the pressure on the currency, surging inflation has seen Egypt's real rate turn negative. Egypt, up until March, had maintained one of the highest real rates (policy rate – CPI) in the world, which had made it an attractive investment destination for investors looking for higher returns, resulting in significant inflows.

While the CBE opted to keep its interest rates unchanged at the last meeting, we are of the view that policymakers will need to resume tightening policy to help cool inflation and provide support to the pound. Moreover, in the context of a hawkish Federal Reserve, a significant rise in the policy rate may be needed for a recovery in portfolio flows. That said, higher interest rates could raise debt servicing costs for one of the Middle East's most indebted countries.

One of the key charts from our fixed income dashboard is the Sovereign Risk vs Reward Monitor, which plots a country’s 10yr (or as close to a 10yr) Eurobond yield against the bond’s respective sovereign credit rating score (Moody’s). This allows us to gauge at a glance which sovereign bonds offer the highest yields relative to their perceived risk, which in this case, we score based on the country’s credit rating. 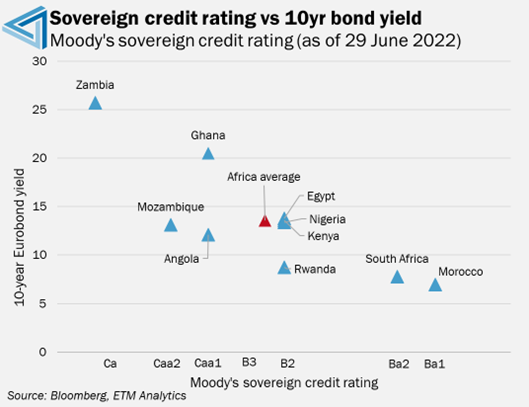 The chart shows that out of the 10yr Eurobond included in the sample, the average yield is 13.57%, and the average credit score is between B3 and B2. For this assessment, we will compare the Eurobond yields of countries with a similar credit rating to understand whether they are trading at a discount (higher yield) or premium (lower yield) to their peers.

Rated Caa2 by Moody’s we have Angola and Ghana. While both countries are in a precarious fiscal position, the two commodity-exporting nations are on entirely different fiscal paths, and this is reflected by the wide spread between their 10yr Eurobond yields. For context, Angola’s 2032 Eurobond yield is trading just north of 12%, while the comparable Ghanaian Eurobond yield is trading above 20%. While, at first glance, it would appear that Ghanaian bonds offer better value relative to their associated risk, investors should conduct a deeper analysis of the fiscal outlook for both countries. If, after conducting a thorough analysis, it is clear that Ghana will return to a sustainable fiscal path, Ghanaian bonds would certainly be a better relative trade. The same can be said about Egyptian bonds, whose yields are trading above similarly rated Eurobonds of Nigeria, Kenya and Rwanda, which are all rated at B2 by Moody’s.

This is where ETM’s Fiscal Resilience Framework plays a key role. The Fiscal Resilience Framework uses a number of proprietary metrics to assess structural and systematic risks to rank a country’s fiscal fragility, providing investors with a thorough analysis of all the fiscal risks associated with the countries included in the framework. We will unpack the framework in a series of research pieces over the coming months. 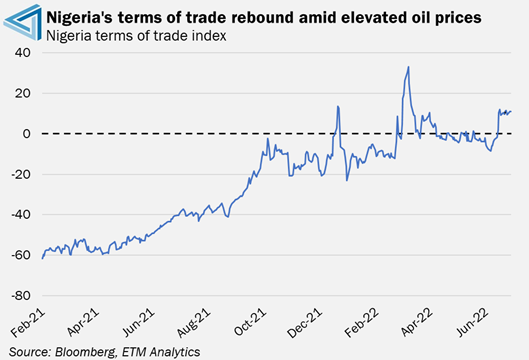 High commodity prices are supporting African countries that are net exporters. With Russia and Ukraine’s supply being in question and a lot of countries imposing sanctions on importing from Russia, countries are having to look for alternative suppliers. Africa is an extremely resource-rich continent which makes it a great alternative source of commodities.

Taking a closer look at some African countries, Nigeria’s terms of trade have rebounded from negative territory in January to positive territory from halfway through this month. Improving terms of trade in these countries will provide some support for the currencies of these exporting nations as hard currency inflows increase. With commodity prices expected to remain elevated for the rest of the year, we could see the currencies of African exporting countries outperform.