As the Taliban took control of Kabul and Afghanistan on Sunday, investors will focus on the regional impact.

The initial focus is on the impact on Pakistan. Pakistan US$ bonds were indicated about half a point lower at opening today with the yield on the '27s rising about 12bps to 6.3%, as investors worry about spillover risks.

While the economic impact may be limited, Pakistan is likely to find itself in a difficult position with a mixture of increased threat of violence in the country and more refugees, while trying to keep the Taliban onside and balancing its strategic importance to the US and reliance on Western donors.

Pakistan had outperformed notably over the first half of the year, outperforming the EMBI Global index by nearly 6% on a total return basis through mid-June. However, since then it has underperformed the EMBI Global by c1.8% as the government has softened its commitment to certain key reforms under its IMF programme, raising concerns that the programme could go off track and remove a key backstop for Pakistan's reform and fiscal consolidation agenda. Recent events in Afghanistan will only add further concerns about Pakistan's ability to hold the line on its budget targets, potentially increasing spending on security and leading to an influx of refugees.

Tajikistan and Uzbekistan, which also share a border with Afghanistan and which have outstanding US$ bonds, may also be at some risk, although the risk of the conflict spreading over the border may be mitigated after Taliban forces reportedly seized the border and promised not to attack neighbouring countries. This might also reduce the risks to these countries of an influx in refugees. That said, to the extent that such security guarantees depend on Russia's backing, this may pull Dushanbe and Tashkent closer into Moscow's orbit.

Still, the economic impact on Tajikistan (B3/B-/-) could still be severe if development of the Rogun Hydropower Power Plant (HPP), which is under construction, is no longer viable given the intention to export much of the electricity generated to Afghanistan and Pakistan through the CASA-1000 project. This remains to be seen and it is too early to say. But can the project continue if one offtaker is under Taliban rule, and what do the donors and MDBs that are supporting it think about that, despite the region's obvious energy deficit? Moreover, the grid to Pakistan has to go through Afghanistan. However, given the amount of funding already provided, perhaps the IFIs will find a way. 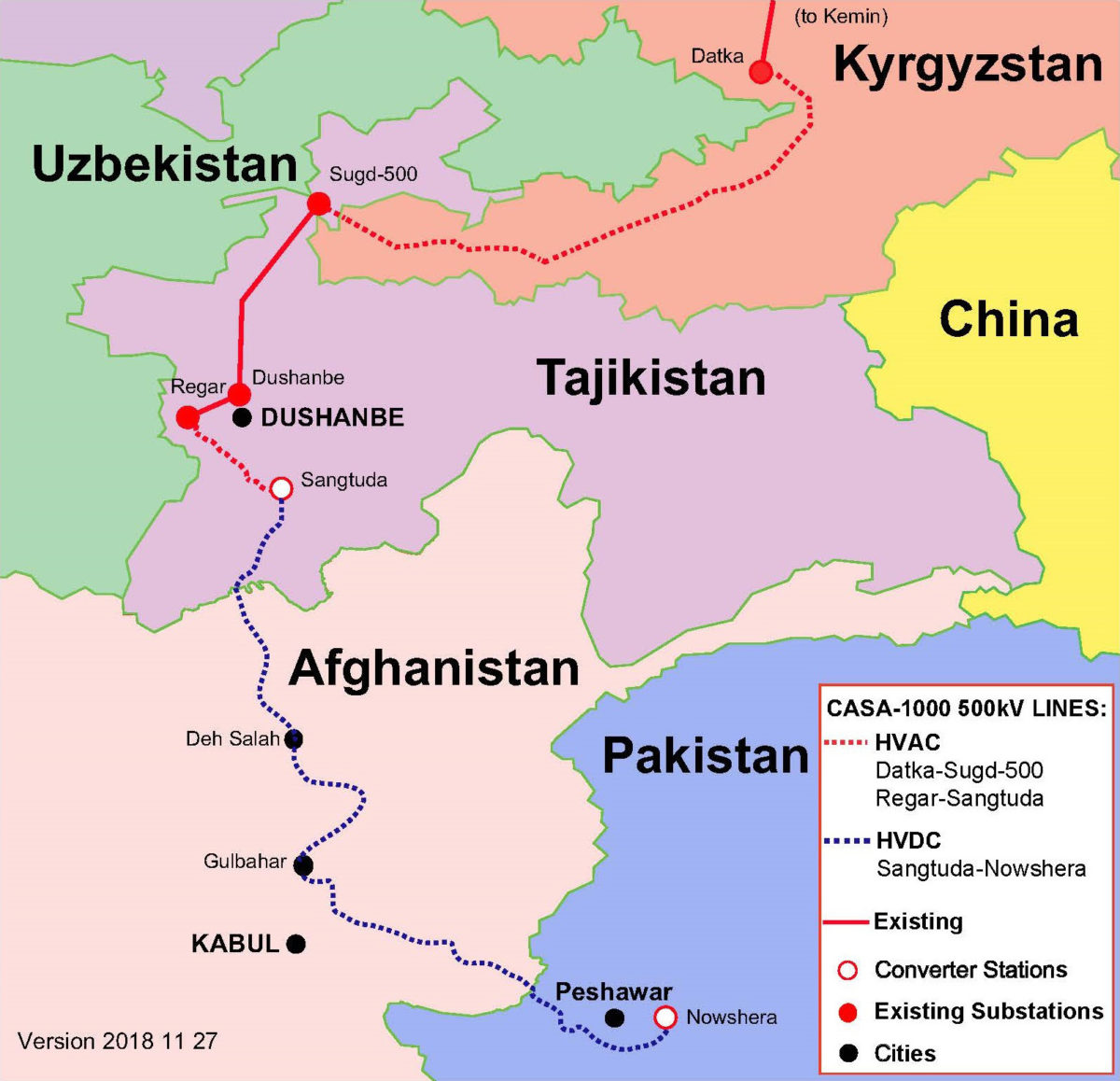 Although the Rogun dam is not expected to be finished until 2032, so there is still time, investors will be concerned that delays to the project, or project failure, will put repayments on the eurobond at risk, especially as Tajikistan is already assessed by the IMF to be at high risk of debt distress and the chances of an IMF bailout are somewhat limited without greater transparency over the debt situation. The US$500mn TAJIKI '27s, issued in September 2017 to help finance Rogun, begins to amortise in 2025.

Meanwhile, we think Uzbekistan's economy, with stronger credit metrics (B1/BB-/BB-), is better placed to absorb an external shock and (temporary) deterioration in external financing conditions caused by spillover from Afghanistan. In particular, Uzbekistan's external liquidity ranks favourably among other frontier markets on our methodology. Reserves (excluding gold) amount to cUS$14bn (June, as per IMF IFS).

More generally, the direct economic impact thought cross-border trade on these countries is unclear but is likely to be limited, although data on the extent and nature of inter-regional trade is sparse. According to OEC data, only 4% of Pakistan's exports go to Afghanistan and 3% for Uzbekistan. It is not clear whether, and on what basis, international trade can and will continue under Taliban rule, especially amid the risk of western sanctions to isolate the regime. Depending on the goods' substitutability, it may be possible to shift trade away from Afghanistan, redirecting exports to other markets and sourcing imports from other destinations too.

We downgrade Tajikistan to Sell from Hold, with a yield on TAJIKI '27s of 9.1% as of cob 13 August on Bloomberg (mid-price basis), pending greater clarity over the future of the Rogun dam.

We maintain our Hold on Pakistan, with a yield on PKSTAN '31s of 7.0% (z-spread 587bps) as of cob 13 August on Bloomberg (mid-price basis). Prices are now indicated a point and a half lower, with the yield rising about 20bps today to 7.2%. 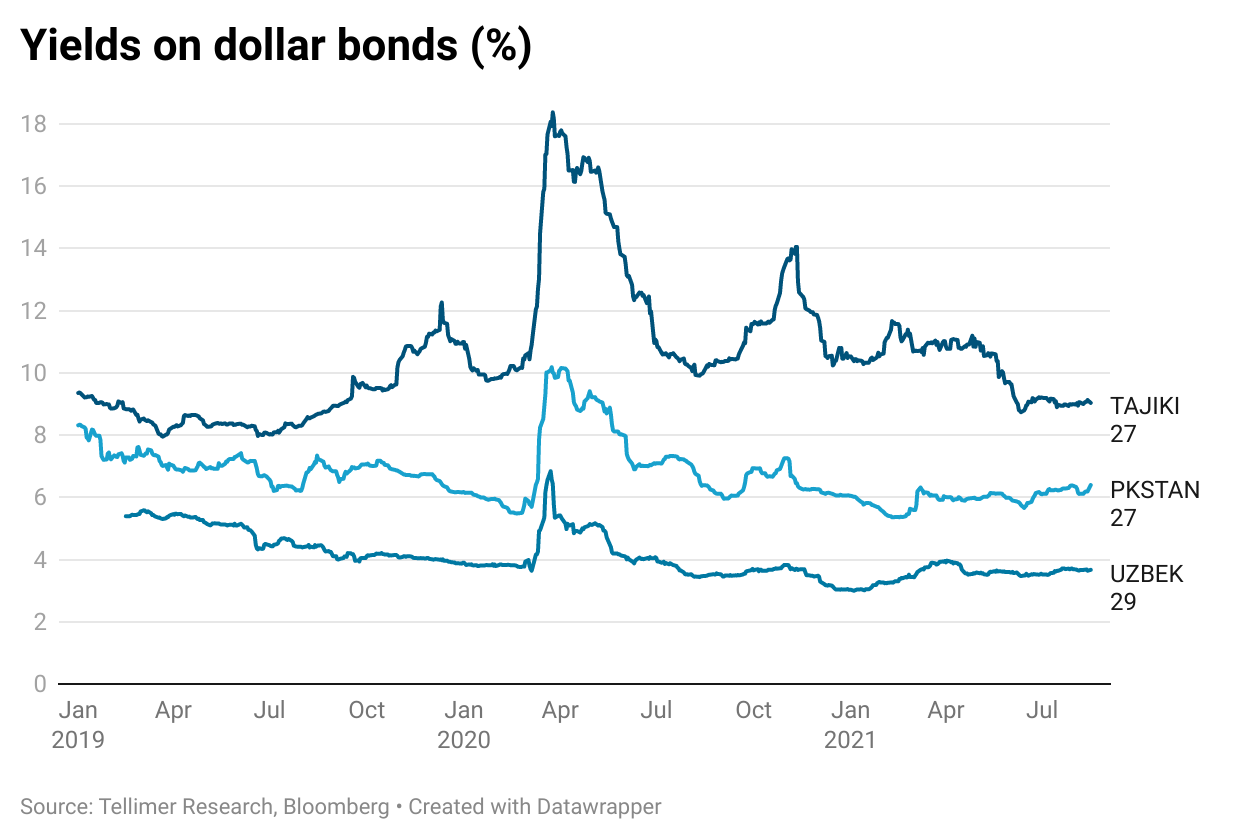