Markets have lately been oscillating between fears over inflation and recession, with investors worrying that the Fed (and other major central banks) either haven’t done enough to tackle inflation or may end up doing too much, thereby pushing the US (and other major economies like the EU) into recession to achieve that goal. Indeed, inflation has continued to surprise to the upside, with US CPI inflation reaching a 40-year high of 8.6% in May (above the consensus 8.3% forecast), and is projected to rise even further to 8.8% in June (with data due on Wednesday). That said, recession fears have seemingly overtaken inflation fears of late.

Alongside an extremely tight labour market, with the US unemployment rate dropping back to pre-Covid levels and 50-year lows at 3.6%, this has strengthened arguments that the US economy is overheating and that the Fed will need to engineer a negative output gap and rise in unemployment (eg cause a recession) to cool the economy, reduce demand-side pressures and prevent a de-anchoring of inflation expectations and/or a loss of credibility.

This sentiment is evident in the press, analyst comments and conversations with the investing community. But we find it puzzling that while everyone is talking about a recession, few people are actually forecasting one. Nor does market pricing of interest rates appear to suggest that a recession is imminent, despite some modest moves in that direction since mid-June. In the following report, we will unpack this anomaly and assess what it means for markets.

While the 10y2y spread turned negative last week, traditionally seen as a recession signal, we have previously explained why the near-term forward spread is a more reliable signal of recession (it is the Fed’s preferred indicator too). A negative near-term forward spread (defined as the 18m3m USD forward rate minus the current 3M T-bill rate) reflects market expectations that Fed policy will be looser 18 months from now (eg due to the need to cut rates to combat a recession). While it has halved from a peak of 2.7% at the beginning of April to 1.36% at cob on Friday on rising recession fears (after touching as low as 1.22% on 5 July), it is still well above the 20-year average of 0.6% and reflects market expectations that the Fed’s hiking cycle will continue (albeit less aggressively than three months ago). 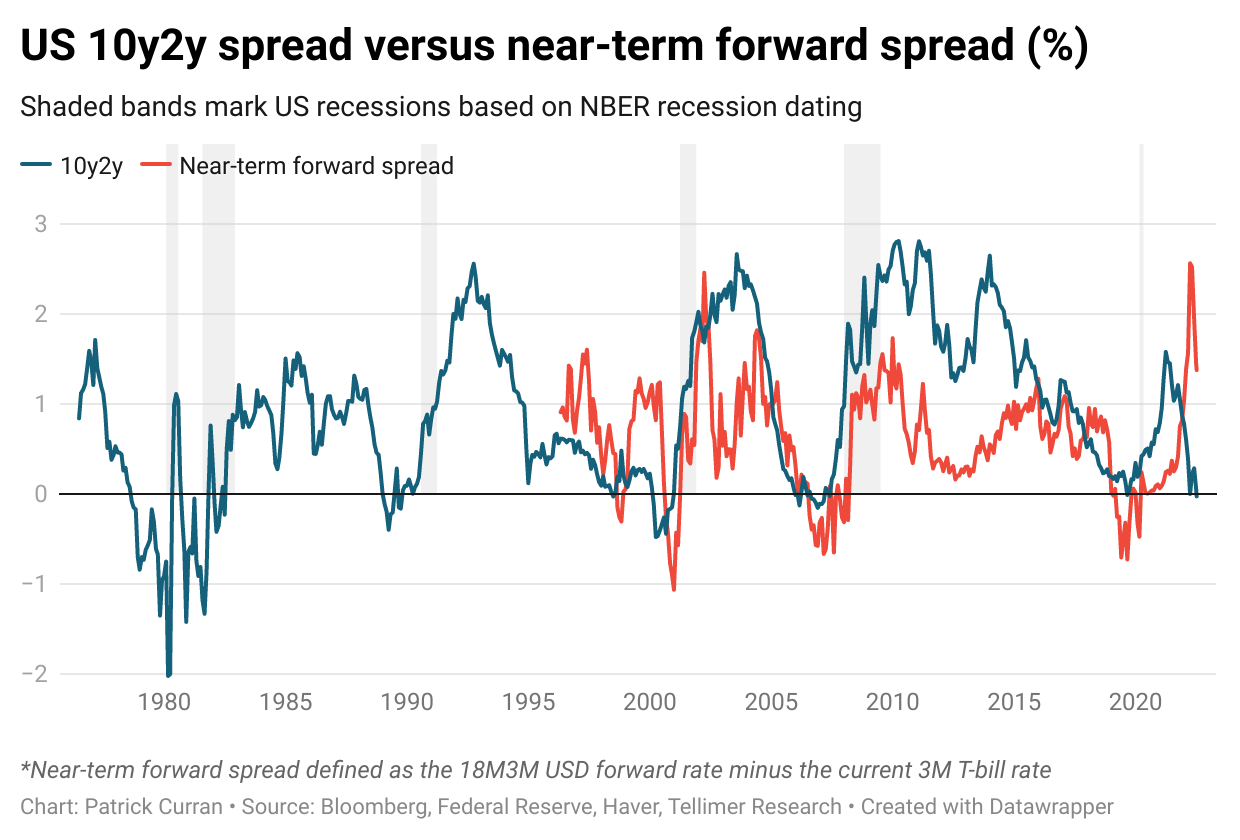 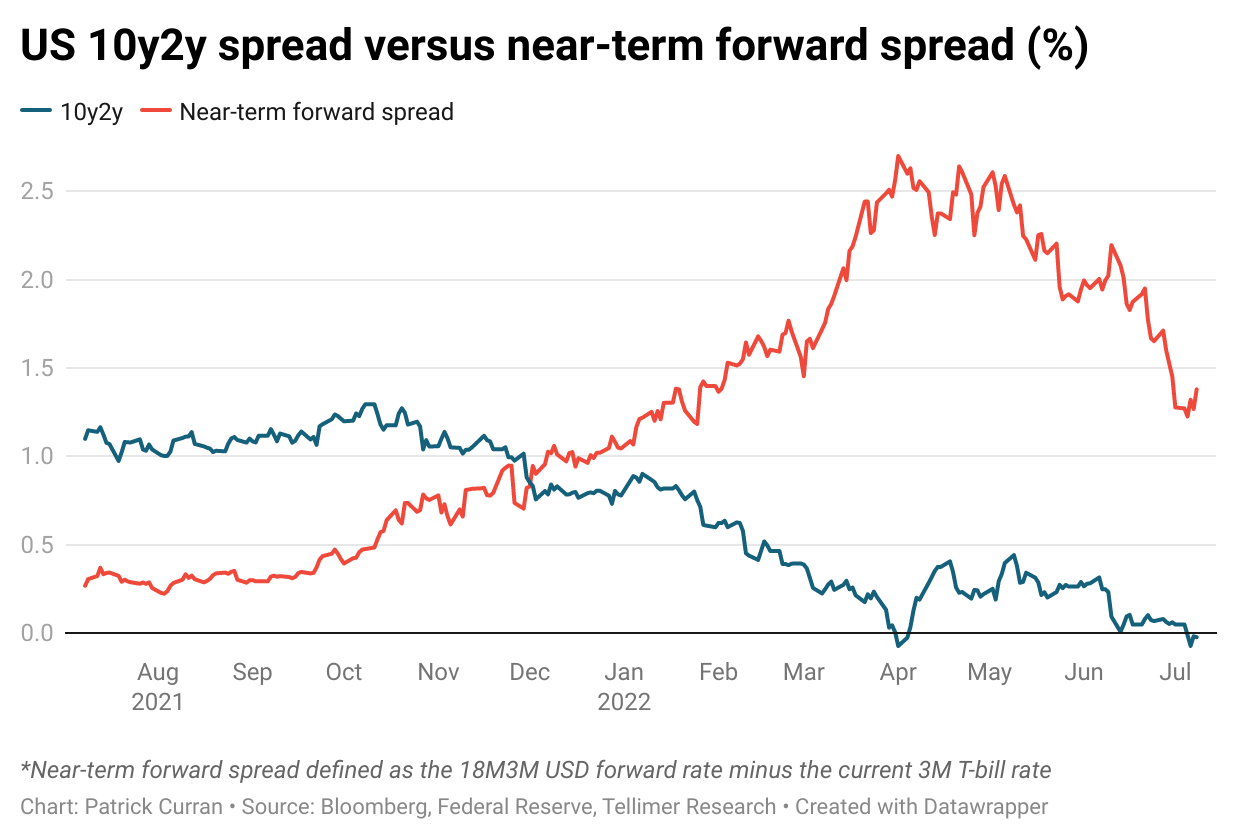 Likewise, the futures market is pricing an ongoing rise in the Fed funds rate to c3.5% by year-end, down from c3.75% in mid-June but above the c3.25% figure on 5 July. The decline in recent weeks is indicative of heightened recession fears, which is also illustrated by the declining rate path from March 2023 onwards.

However, it still implies 200bps of hikes from now until March 2023, and rates remain well above current levels throughout the forecast horizon, which does not point to excessively large recession worries in the futures market, either. 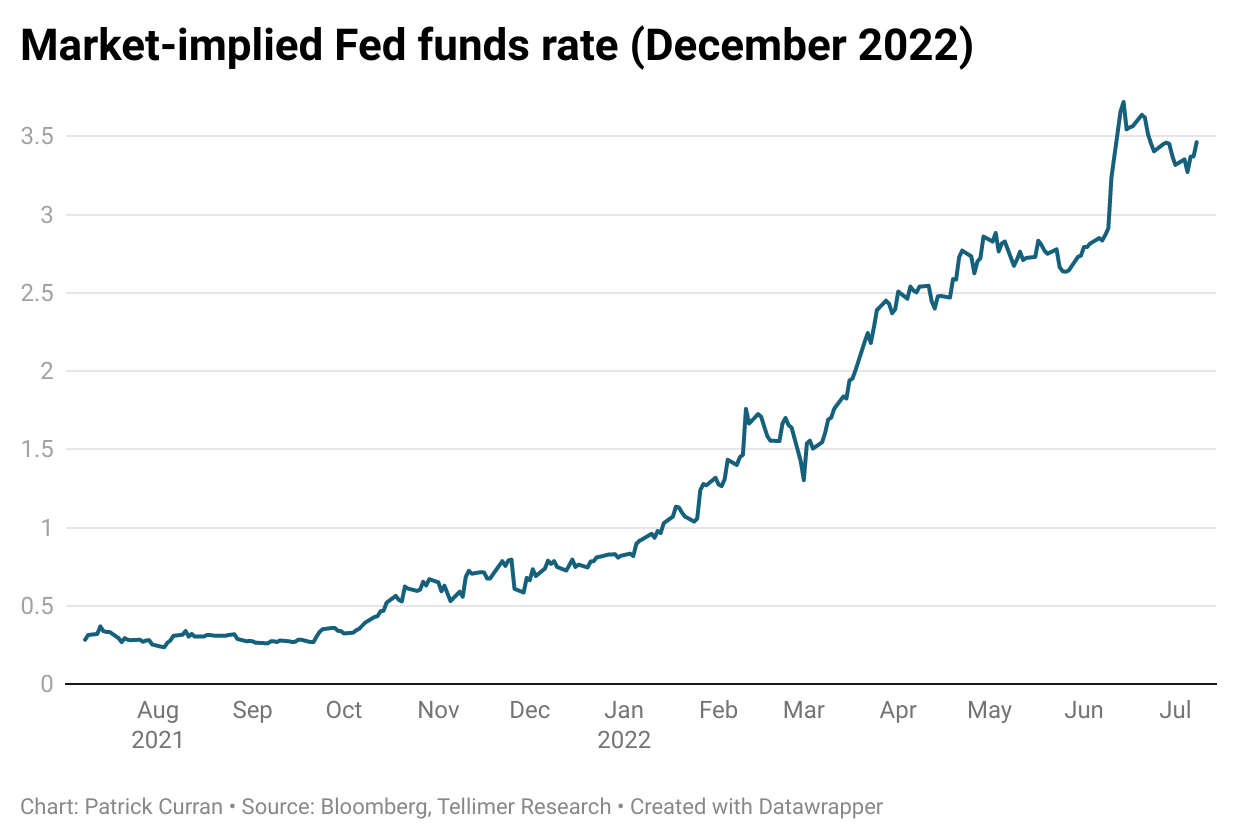 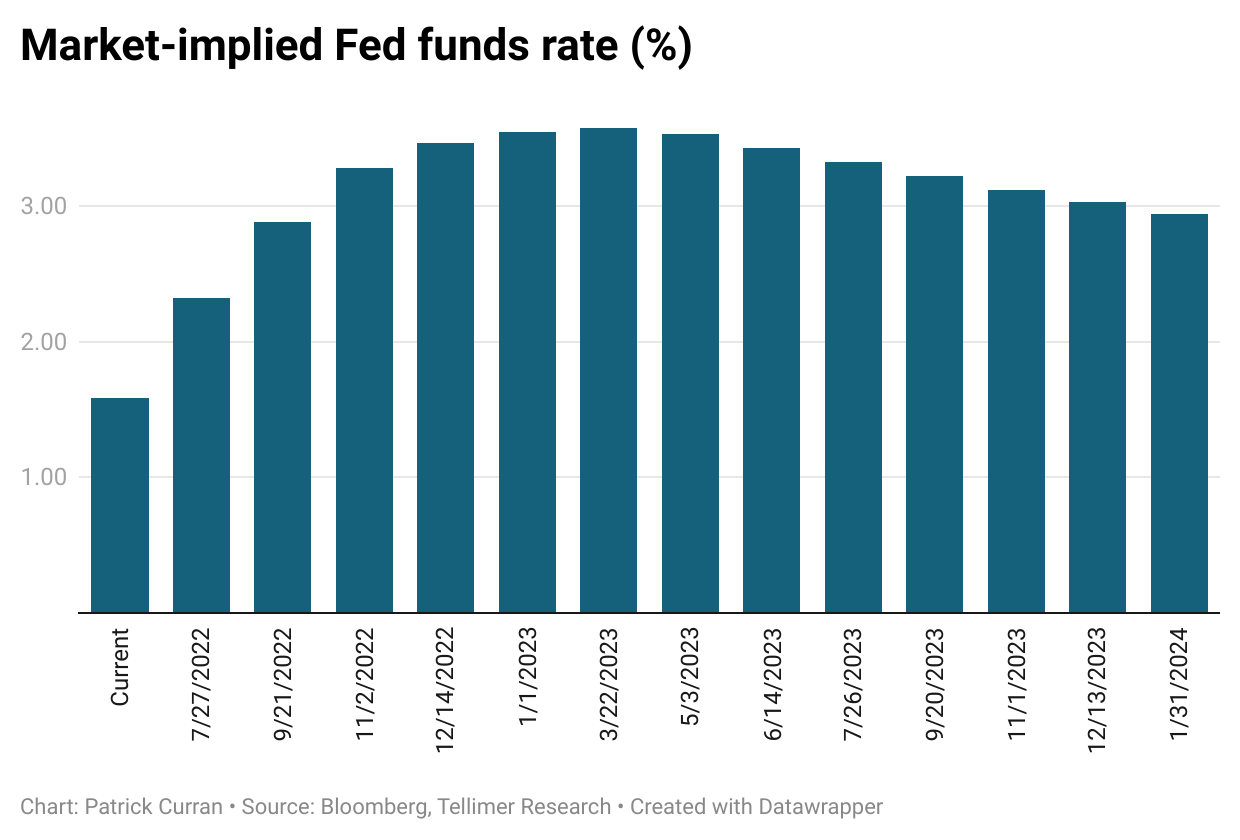 Recession fears have also cooled notably on the back of Friday’s surprisingly strong US non-farm payroll print (372,000 jobs were added in June versus a 265,000 Bloomberg consensus expectation), which helped reverse some of the recent drop in the near-term forward spread and Fed funds futures.

Treasury yields were also buoyed by the news, with the 2-year and 10-year yields both rising by 9bps on Friday. While the 10-year fell from a peak of 3.47% on 14 June to 2.81% on 5 July on rising recession fears, it closed the week at 3.08% as those fears evidently began to wane. 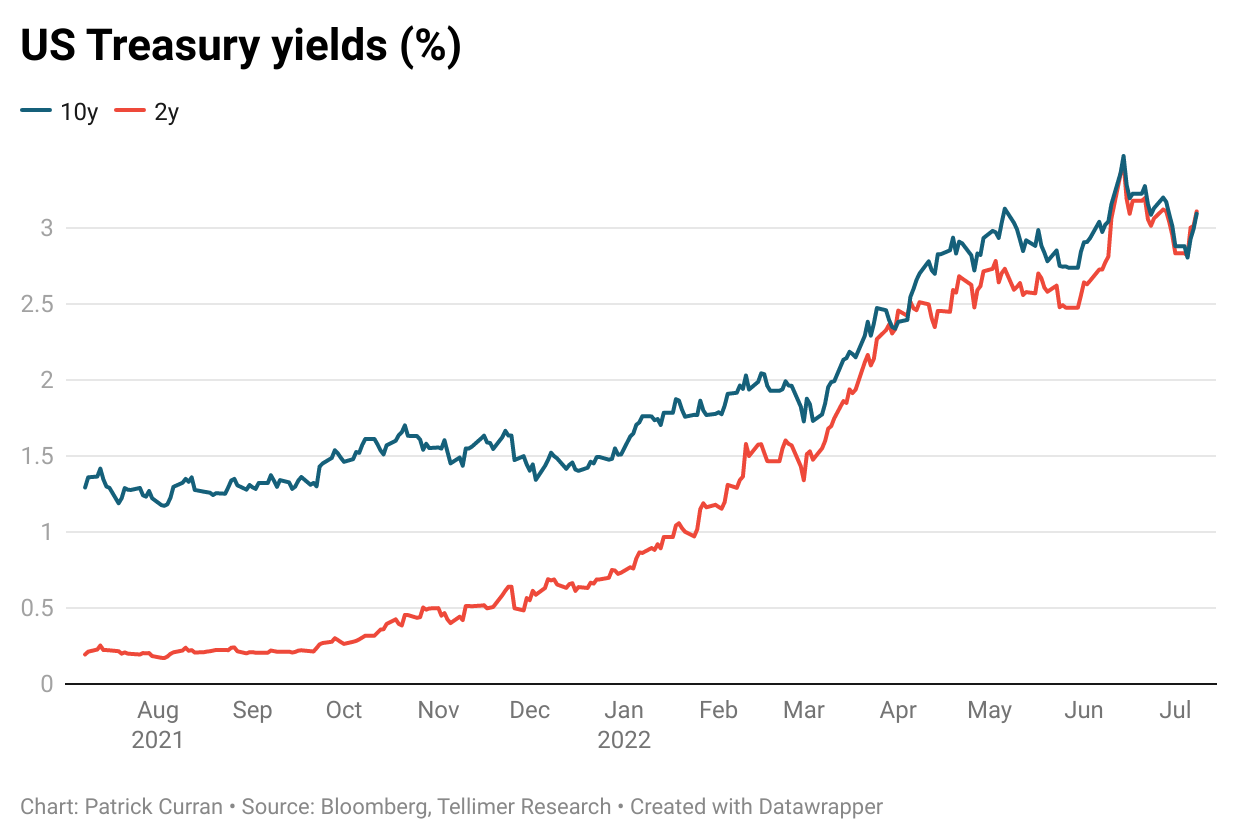 Although financial markets have priced in an increasing risk of recession since mid-June, they are still a long way from flashing red warning lights and those risk signals have moderated since the middle of last week.

Nor are they signalling a de-anchoring of inflation expectations, with the 5y5y breakeven inflation rate remaining in the 2-2.5% range over the past year and falling by 50bps since the mid-April peak to the bottom of that range, which partly reflects rising recession fears but, combined with the other data, may signal confidence that the Fed will be able to engineer a “soft landing”. 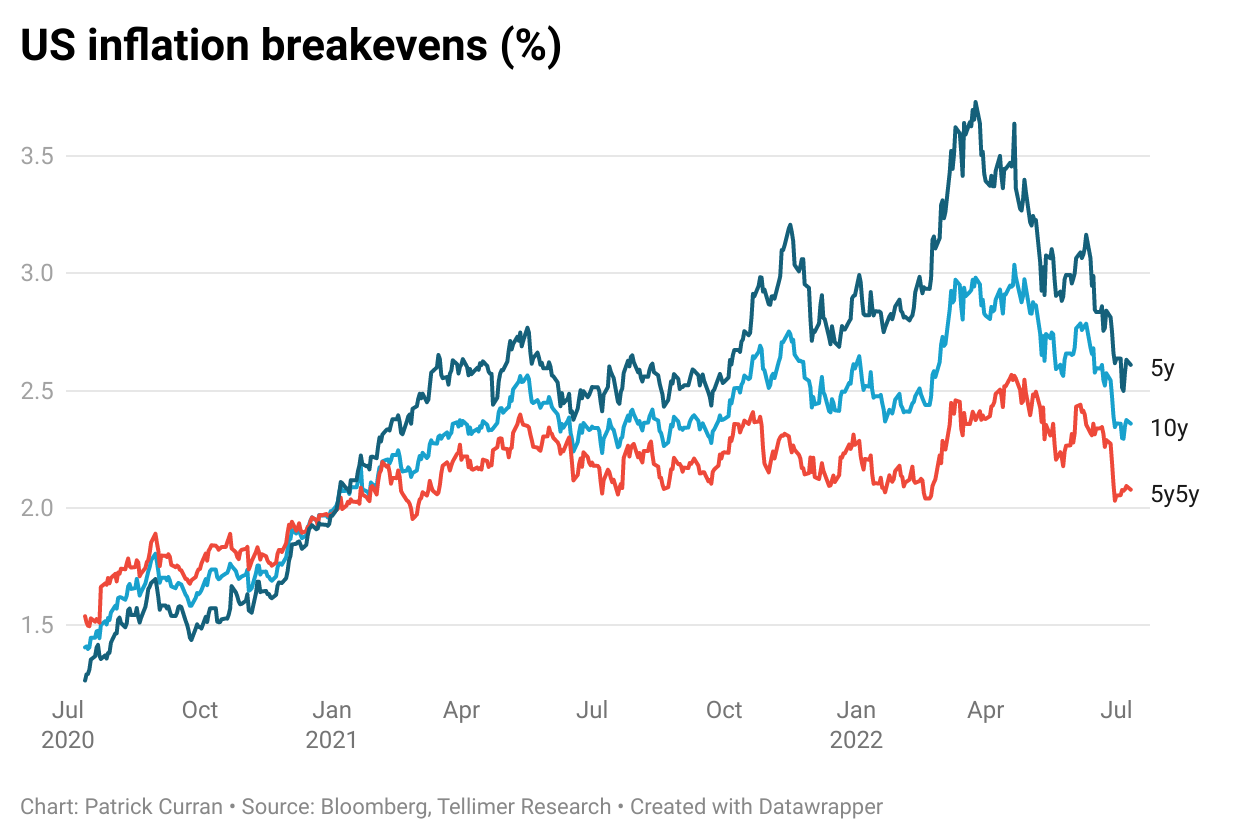 Survey data is painting a similar picture. While the 12-month recession probability from Bloomberg’s US economic survey has risen to 33% from 15% at the beginning of the year, only one of the 75 analysts surveyed is projecting a GDP contraction in the US in 2022 and only four are projecting one in 2023.

Likewise, none of the 56 analysts surveyed are projecting a recession in the Eurozone in 2022 and only two have negative projections for 2023. 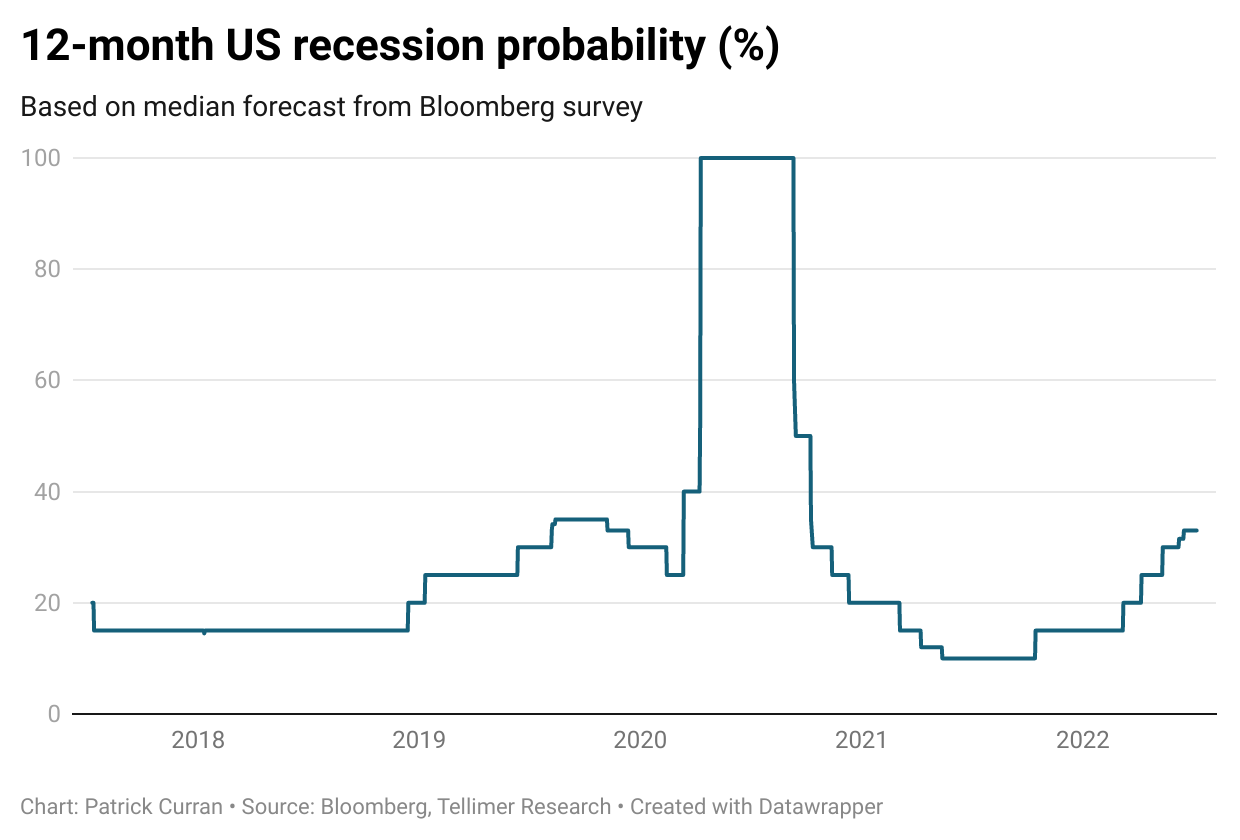 There also seems to be a disconnect between relatively sanguine growth forecasts and the hard growth data, with the Bloomberg Economics Global GDP Tracker dropping sharply in recent months (albeit not yet into negative territory), indicating a rising risk of recession in the US, EU and China based on high-frequency data (although the slowdown in China has been telegraphed for some time). 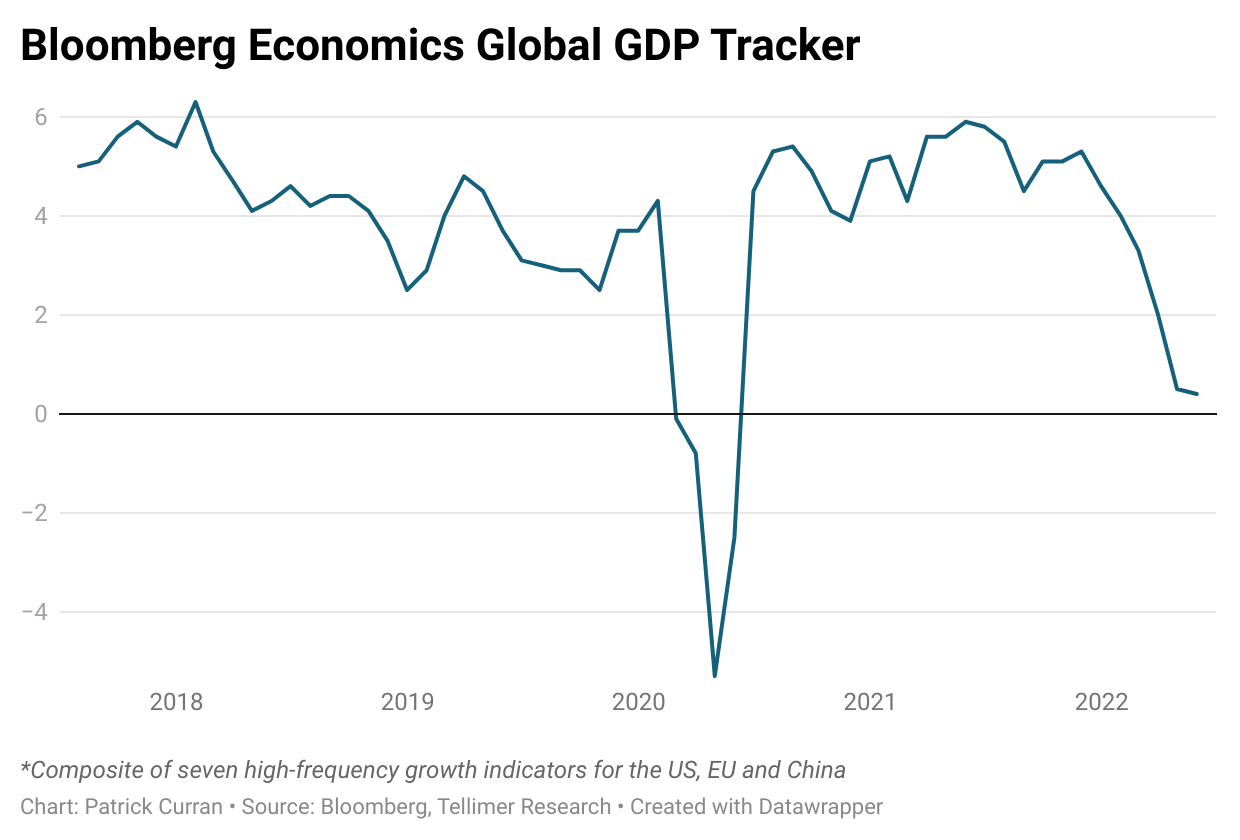 The Fed and IMF also seem relatively sanguine on recession risks, with both institutions revising US growth forecasts downward in recent months but, still, neither expecting a contraction (with the IMF forecasting growth of 2.9% in 2022 and 1.7% in 2023 – and even saying the US should avoid a recession, albeit narrowly, based on the Fed’s own rate path – and the Fed forecasting growth of 1.7% in both years).

These forecasts are in contravention of the Atlanta Fed’s GDP Nowcast, one of the few recessionary signals we know of, which turned negative at the end of June (albeit with a slight improvement on Friday with the NFP print). 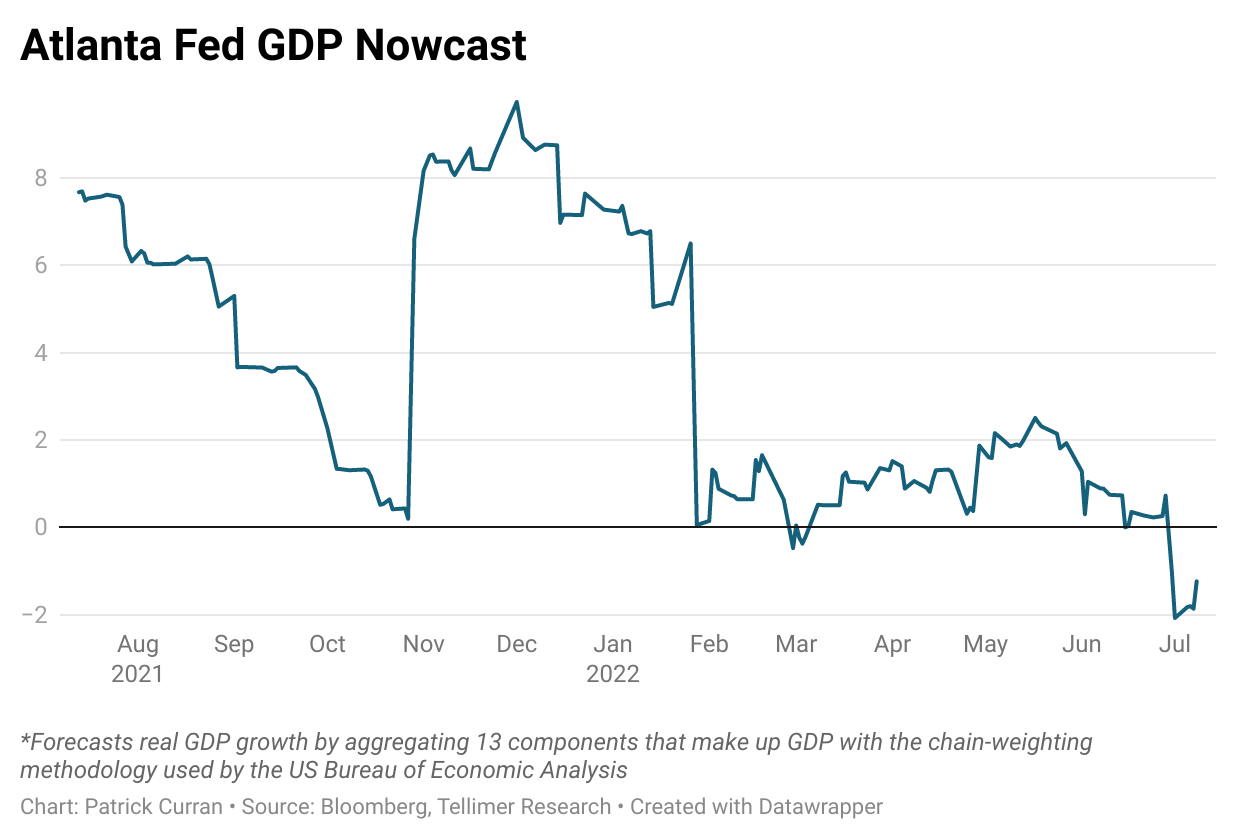 In fact, with GDP in the US already recording one quarter of negative growth in Q1 (-1.6%qoq SAAR) and the Atlanta Fed’s GDP Nowcast pointing to low or negative growth in Q2 (it averaged 1.15% on the quarter and dipped to -1% on the last day of the quarter), there is a risk that the US is already in recession, at least on a technical basis (defined as 2 consecutive quarters of negative growth on a qoq SAAR basis). That said, with much of the higher frequency data for Q2 already in, the median forecast is for 3%qoq SAAR growth in Q2 and only one of the 60 analysts surveyed by Bloomberg is projecting a contraction. This is quite a contradiction to the Nowcast

Although this could point to a consensus that the US will avoid a technical recession in Q2, we note that three-quarters of the forecasts in the analysts’ survey date back to 9 June and the eight forecasts from this month have a lower median of 1.8%. Nonetheless, growing concerns about a US recession are still not being reflected in the survey data, and don’t appear to be priced into the market data either, creating a disconnect with the largely dour tone of many analysts and investors that may need to be squared via downward revisions to growth projections and/or a less hawkish pricing of the Fed’s rate path.

That said, whether or not the US enters a recession could be a moot point for the Fed. The Fed’s forward guidance has been clear and consistent, with Board members saying that inflation is much too high and must be brought down as a matter of priority (this was echoed in the FOMC minutes last week). Even if the US enters a technical recession, therefore, we think the Fed is unlikely to alter its hiking plans (with guidance pointing to a 75bps hike in July and 50bps in September) as long as inflation is still at a 50-year high and unemployment at a 50-year low.

Currently, the Fed is focused primarily on the inflation side of its dual mandate of stable prices and maximum employment, and focusing on the risk of recession before the Fed has begun to restore a semblance of price stability could put the cart ahead of the horse (this was seemingly echoed by Kansas City Fed President Esther George in a speech today, saying “I find it remarkable that just four months after beginning to raise rates, there is growing discussion of recession risk, and some forecasts are predicting interest rate cuts as soon as next year”).

For the Fed to hit pause on its hiking cycle, we think it would need to see evidence that inflation is on a sustained downward trend, and for the Fed to reverse course and cut rates it would likely need to see a rise in unemployment and increasing slack in the historically tight labour market rather than just negative growth. With the prospect of rate relief seemingly more distant than recession fears suggest, this means that more pain could be in store for EM assets, with a US recession likely to hit global growth without the offsetting and simultaneous decline in interest rates, maintaining tight global financial conditions even as growth slows.

This could also explain the apparent anomalies in market pricing, with the projected rise in the Fed funds rate not pointing to confidence that the US will avoid a recession but instead to expectations that the Fed will stay the course even if the US dips into a recession. That said, while markets are currently pricing a rise in the Fed funds rate to c3.5% by year-end, this is just 100bps above the Fed’s longer-run 'neutral' rate and does not signal a particularly tight policy stance with inflation at a 40-year high, so there is still a risk that rates need to rise even further (we highlighted this risk three months ago).

Indeed, the last two times headline CPI exceeded 5% (in 1990 and 2008), the Fed funds rate was on the way down from peaks of 8.25% and 5.25%, respectively, which may put current concerns about a terminal rate of c3.5-4% in context. However, given structural changes in the decades since, including estimates of a steady decline to the neutral real interest rate (r*), and a still-large supply-side and commodity component to current inflation levels, there may be limited lessons to draw from past disinflation experiences in terms of the current cycle.

Overall, we think the evidence points to more pain for EM assets until inflation is on a clear downward path in the US and other key developed markets. Unlike “normal” times, when a recession leads to lower rates and easier financial conditions, this time around EM might face the double-whammy of lower global growth and a continued tightening of financial conditions. There is also the risk of further rate surprises if inflation continues to surprise to the upside, forcing another sharp upward adjustment like we saw in the first half of June (although it’s less of a risk than previous months given the recent adjustment).

If the Fed is able to engineer a soft landing where inflationary pressures moderate without growth turning negative and unemployment rising sharply, then the headwinds for EM assets could begin to moderate. However, there will need to be several months of data that point to unwinding price pressures before that point is reached. In the meantime, elevated uncertainty about the US growth and rate trajectory will continue and global financial conditions will remain tight, which will continue to weigh on EM risk sentiment.