Tomorrow sees the release of the US CPI number, any surprise to the topside is likely to cause a spike in US Treasuries which will be negative in the short term for gold, but longer term the structural hedge characteristics of the metal will undoubtedly shine through.

Oil’s rally appeared to be faltering yesterday as both the Brent and WTI front-month contracts edged off from their cycle highs amid profit-taking and rising inflation concerns. However, the dips were brief as both contracts are bid once again this morning following yesterday’s release of the API inventory figures, which suggested another notable drawdown in stockpiles, which the official data out today could confirm. The API reported that inventories fell by 2.11mn barrels last week, a third consecutive weekly decline that takes stockpiles down to their lowest since February. Further supporting the market is a weaker USD as well as signs that India’s recent deadly virus wave may be easing as the rate of new infections slows.

In the currency market, still no change to the performance of the USD, which remains largely range bound. Technical indicators are pointing to a loss of momentum in either direction and for now the market continues to look for a catalyst that might only come in the remaining two trading sessions of the week when some of the more important data is released. US CPI in particular will be the key release tomorrow that will offer perspective on the outlook for monetary policy and offer clues on how it might impact growth and the trade balance more broadly.

Uganda: The Ugandan government suspended its mass vaccination program due to a shortage of vaccines. Ministry of Health spokesperson Emmanuel Ainebyoona said that the mass vaccination will be suspended as the country waits to receive more vaccines from different sources. President Yoweri Museveni announced that the country would receive a donation from China soon and is also planning to buy doses from Russia, Cuba and the USA. The announcement comes after the government tightened restrictions on Sunday to minimise the spread of the virus.

Angola: Angolan Finance Minister Vera Daves de Sousa announced that the nation will not be selling debt in the international market this year and will focus on attracting foreign investment and carrying out reforms to diversify the economy. Finance Minister was quoted saying, “we do not intend to issue a Eurobond this year” and “we will see the financial conditions to think about that next year.” The decision to withdraw from issuing debt this year will be welcome by the markets, given the country's massive debt pile. Angola’s public debt pile surged from 107% of GDP to an estimated 134% of GDP last year. The surge in debt increases the risk of default.

South Africa: President Cyril Ramaphosa placed Health Minister Zweli Mkhize on special leave after he was linked to a tender scandal. Health Minister Mkhize has come under scrutiny in recent weeks after it emerged that the Health Department awarded a R150mn ($11mn) contract to Digital Vibes, a company controlled by two of his former aides that helped communicate the state’s response to the COVID-19 pandemic. President Ramaphosa appointed Tourism Minister Mmanoloko Kubayi-Ngubane as the acting health minister until further notice. However, should there be any irregularities on the deal and Minister Mkhize is found guilty, we could see President Ramaphosa being forced to reshuffle the cabinet as vacant posts increase in his administration.

Zimbabwe: The Zimbabwean government asked the African Export-Import Bank to delay the arrival of Johnson & Johnson COVID-19 vaccines. This request comes amid concerns over the possibility that the shots may cause clots and the country’s inability to keep the doses at the right temperature. In a letter to Afreximbank’s Chief Regional Officer Humphrey Nwugo, Secretary for Finance George Guvamatanga wrote the “Zimbabwe is not yet ready to participate in the August allocation as measures are still being put in place to establish the cold chain management framework for vaccines, as well as on the management of the anticipated adverse effects of the vaccines.” It is worth noting that the delay highlights the problems facing less developed countries and will likely result in a slow vaccine rollout.

Uganda: The World Bank approved $200mn in financing to expand access to high-speed and affordable internet in Uganda. $140m will come from the International Development Association (IDA), and the remaining $60mn is a grant. The new Uganda Digital Acceleration Project-GovNet will support the extension of 1000km of national backbone fibre infrastructure, an additional 500km of fibre optic network links between towns, mobile broadband connections for 900 government administrative units and service centres in underserved areas. According to the World Bank, the digital platforms will create foundations for better resilience and economic recovery by boosting the effectiveness of government e-services.

South Africa: Notwithstanding a slight nudge higher yesterday, the cost of insuring against default on South African dollar-denominated debt remains anchored. The 5yr CDS spread sits at around 186bps, near its lowest level since early March 2020. Underpinning this fall is the robust performance seen in the ZAR, as well as global optimism over an economic recovery that is driving a rotation back into riskier assets. Looking ahead, SA's CDS spread is likely to compress further as the ZAR finds some support from the further weakness in the USD and the improvement in global risk sentiment, buoyed by vaccination intensification. However, the fragility of SA's fiscal situation remains a key risk that will keep CDS spreads elevated above their pre-pandemic levels.

Forex: Ugandan shilling reaches its strongest level against the USD in more than 4 years

The bullish bias in the Ugandan shilling (UGX) remains entrenched, with the currency extending its gains against the USD on Tuesday. The UGX gained 0.33% against the greenback on Tuesday to reach its strongest level in more than four years. The recent appreciation in the UGX has partly been due to commercial banks selling dollars due to the reduced importer demand. 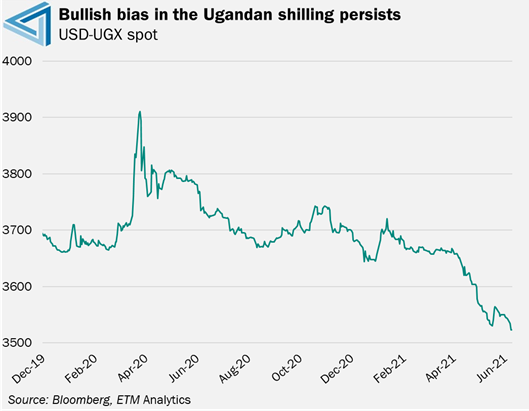 Pulling back the lens, the UGX has appreciated by 3.69% against the USD on a year-to-date basis, making it the third-best performing African currency in 2021. The resilience in the UGX can be attributed to the influx of foreign currency from multilateral lenders, including the IMF and the World Bank, rising gold and coffee commodity prices and relatively sound macroeconomic and fiscal dynamics. Hopes of Ugandan becoming an exporter of oil is also providing support for the currency with Uganda. Note that Total is expected to make a $5bn bet on a Ugandan oil project.

Additional tailwinds for the UGX include prudent monetary policy and a broadly weaker USD. Given the prudent monetary policy and the drop in consumer prices, positive real rates have risen. For context, Uganda’s real interest rate currently sits at 5.10%. Going forward, although the rally in the UGX may seem overdone, given the underlying dynamics in Uganda and favourable external conditions, we see room for a further appreciation in the UGX.

Global ratings agency Fitch released a report on Tuesday that showed that the sovereign issuer-based default rate hit a record high in 2020 as the COVID-19 pandemic triggered a wave of emergency spending while at the same time stifling government revenue intakes. Fitch’s Sovereign 2020 Transition and Default Study revealed that 5 Fitch-rated sovereigns defaulted in 2020, up from only 1 in the previous year. As a result, the sovereign default rate increased to 4.2% in 2020 from 0.9% in 2019. Note that the previous high was 1.8% in 2017.

The global ratings agency said that the magnitude of the pandemic’s economic impact and government policy responses put significant pressure on sovereign ratings last year. For context, Fitch downgraded 32 sovereigns in 2020 compared to just 2 upgrades, which occurred prior to the global COVID-19 outbreak in March. The agency highlighted in its report that the majority of last year’s downgrades occurred in the early stages of the pandemic, between late March and mid-May.

In 2021, Fitch has downgraded 3 sovereigns with no upgrades. However, outlook changes this year have had a positive bias, with Fitch revising the outlooks on the ratings of 5 sovereigns to stable from negative and 3 to positive from stable, while only lowering 1 from stable to negative. Fitch said that while the initial rating pressure may have abated, more defaults are possible, as indicated by the fact that 11 sovereigns are currently rated lower than B-. Recall that Zambia was the first African country to default in the Covid-era. Fitch noted that Ethiopia’s downgrade to ‘CCC’ in February this year reflected its intention to use the G20 debt suspension initiative, which raised the possibility of a default through the restructuring of debt to private-sector creditors.

On balance, Fitch said that pockets of stress following the increase in external borrowing by emerging-market sovereigns could lead to further missed payments, with smaller and low-rated frontier markets most exposed to rising US bond yields. There are several African sovereigns in a position of fiscal distress and at risk of default this year.

Macroeconomic: South Africa’s economy only expected to return to pre-pandemic levels in 2023

South Africa's economy remained in a contractionary state in the first quarter of the year, declining by 3.2% y/y. This compares with a 4.2% y/y contraction in the fourth quarter, which was revised from a 4.1% contraction. In quarter-on-quarter annualised terms, economic growth moderated from a revised reading of 5.8% q/q in the fourth quarter to 4.6% q/q in the first quarter of the year. On a non-annualised basis, q/q growth came in at 1.1%. Going forward, Stats SA will focus on reporting non-annualised figures. 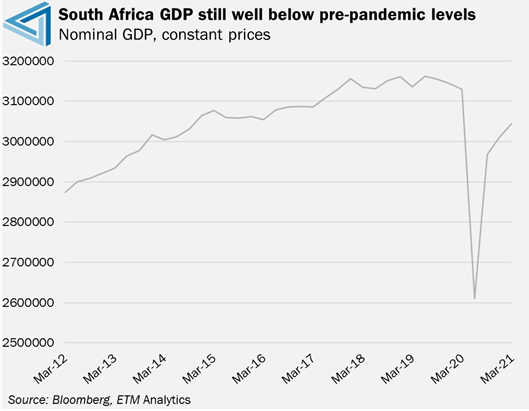 Stats SA attributed the growth to an increase in eight industries during the quarter, led by the finance industry, followed by mining and trade. The reading isn't surprising given that the reintroduced economic restrictions and SA's structural impairments set the stage for an uneven recovery. A positive sign, however, is the increased expenditure by households on final consumption goods during the quarter, contributing 3.0 percentage points to total growth. This signifies consumer spending patterns are starting to normalise. Investment levels, however, remain weak and are a sign that any growth going forward will be difficult to sustain unless we see a strong increase in business confidence levels.

Looking ahead, the looming wave of infections in the winter months could undermine the pick up in consumption and the economic recovery. To sustain the momentum, the government will need to step up its vaccine roll-out while simultaneously addressing SA's shortcomings through the implementation of needed economic reforms. Base effects notwithstanding, economic growth should pick up in Q2, supported by higher commodity prices. Longer-term, however, we still see nominal output only reaching pre-pandemic levels in 2023.