In the FX market, trading has been rangebound in the Asian session as investors await the FOMC minutes later this evening. The USD remains firmly on the defensive for now ahead of the FOMC minutes later in the day that are likely to reaffirm the Fed's commitment to keeping monetary policy loose for an extended period of time.

Monetary policy will likely hold the key on how the USD behaves through the months ahead and for now, it will likely debase the USD. Inflation is rising, interest rates are low, fiscal risks are high, all of which has encouraged America's twin deficits.

Bitcoin has tumbled this morning after China banned its financial institutions from offering services related to crypto currencies. We expect authorities to become extremely circumspect of crypto given the stresses it could place on financial systems, given its inherent volatility.

Zambia: The Bank of Zambia is set to deliver its latest verdict on its policy rate today. While inflation risks remain tilted to the upside, driven by soaring international commodity and food prices, a depreciating Kwacha, and deteriorating fiscal position, expectations are that the bank will likely keep its policy rate unchanged. Policymakers are expected to overlook inflation concerns and instead look to direct their efforts towards economic growth. While the Bank of Zambia is expected to keep its benchmark rate on hold, risks heading into today’s meeting are skewed in favour of the central bank hiking interest rates. We expect the Bank of Zambia to remain cautious and reiterate last meeting’s statement that it “stands ready to adjust the policy rate upwards further should inflationary pressures persist.”

Nigeria: Cocoa beans exports from Nigeria surged 365% to 32.39k tons in April compared to 6.97k tons during the same period in 2020. On a month-on-month basis, Nigerian cocoa bean exports were up by around 50%. The increase in cocoa exports comes off the back of more crop beans stocked in warehouses initially held back by exporters, now being moved to the ports. The primary destination for Nigerian cocoa bean exports in April was Europe, accounting for 42.4% of total shipments. The notable increase in cocoa exports will bolster foreign currency inflows into the country.

Egypt: Amidst the Israeli airstrikes on Palestine, Egypt’s President Abdel Fattah al-Sisi has pledged $500mn to help reconstruction efforts in Gaza, with expert Egyptian construction companies implementing the rebuilding. The Egyptian government that has sought to mediate a ceasefire between Gaza’s Islamist rulers Hamas and Israel since the deadly violence began on May 10 has also sent 65tons of medical aid to the neighbouring Gaza. On top of that, President Sisi is allowing wounded Gazans to be treated in Egyptian hospitals.

Nigeria: In a bid to plug the spending shortfall in the 2021 budget, President Muhammadu Buhari asked lawmakers to approve a $6.2bn external loan. According to the letter from Buhari read by the senate president, the borrowed funds will cover a $13.6bn (or 5.6tn naira) deficit this year with the proposed loan used to fund critical infrastructure projects across transportation, health and education sectors. Should the request be approved, this will mark the return of Nigeria to the international debt market after more than two years. The head of Nigeria’s Debt Management office, Patience Oniha, noted that the timing and amount of the Eurobond issuance will depend on market conditions. Nigeria is struggling to meet its spending commitments following last year’s plunge in crude oil prices due to the epidemic. Tapping into the international debt market will further exacerbate pressure on the government fiscus. Note that Nigeria spends more than 50% of its government revenue on servicing debt. See the macro section for more insight.

Africa: The World Bank pledged $150bn to support Africa over the next five years. According to the World Bank Group President David Malpass, a large portion of the funds will be in the form of grants and long term, zero interest rate loans from the International Development Association (IDA). Furthermore, the World Bank called on countries with excess supply of vaccines to release some of their stock to countries that need them. This call by the World Bank comes as Africa is lagging in receiving vaccines as developed economies hoard the vaccines, thereby delaying the vaccination rollout on the continent.

Forex: Bearish bias in the Mozambican metical persists ahead of the Bank of Mozambique MPC decision

The bearish bias that has been prevalent in the Mozambican metical (MZN) in recent weeks remains entrenched ahead of the Bank of Mozambique rate announcement today. Notwithstanding the broad-based dollar weakness, the MZN depreciated by more than 1% against the USD on Tuesday to its weakest level since mid-April.

Although the MZN has come under some notable selling pressure in recent weeks, the metical retains its title as Africa’s best-performing currency in 2021 against the USD. Notwithstanding the recent sell-off, on a year-to-date basis, the MZN has appreciated by more than 20% as the currency continues to receive support from elevated real interest rates, prudent monetary policy, foreign aid flows and improved terms of trade amid the rally in global commodity prices. 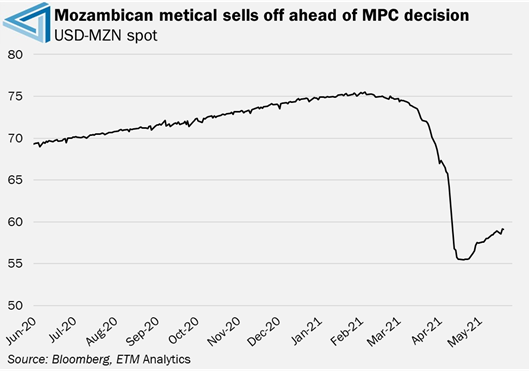 Speaking of monetary policy, the Bank of Mozambique is set to deliver its rate verdict today. Recall that the Bank of Mozambique was the first central bank globally to raise its benchmark interest rate in 2021. The central bank delivered a surprise 300bps rate hike in January, which significantly boosted the country’s real interest rate. Heading into today’s meeting, given the benign inflation environment and relative strength of the MZN, the Bank of Mozambique is likely to keep the benchmark interest rate unchanged as it focuses on supporting the economic recovery. Note that while risks to the outlook are tilted to the upside, inflation remains relatively contained and is unlikely to be a major concern for policymakers.

Ethiopian Eurobonds took a blow to the nose on Tuesday after global ratings agency Moody’s downgraded the country’s sovereign credit rating to Caa1, citing a rising risk for private creditors as Ethiopia pushes to overhaul its debt burden. Recall that Ethiopia announced in January that it would seek debt relief under the G20 common framework designed to help governments restructure debt they owe to official and commercial creditors following the fiscal degradation caused by the COVID-19 pandemic. 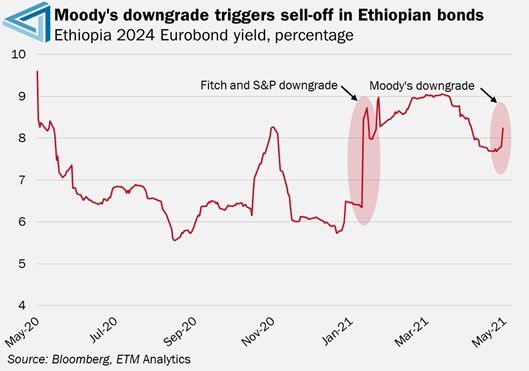 Moody’s said in its statement released on Monday that "The passage of time since Ethiopia's application to the Common Framework suggests a relatively complex decision by the Common Framework's creditor committee, which in turn indicates that an outcome that does not impose any losses on private-sector creditors is less likely." Moody’s also said that escalating domestic political tensions increase risks to subsidising the formal sector and undermine the foreign investment necessary to fund the government in the near and medium-term.

Fears that private-sector creditors, which could include Eurobond holders, could suffer losses from the debt overhaul sent shock waves across domestic markets yesterday as sentiment soured. Ethiopia’s 2024 Eurobond yield, for instance, jumped 43bps higher to 8.24%. Note that this was the largest sell-off in the 2024 Eurobond since February when Moody’s was downgraded by Fitch and S&P for signing the G20 framework. On balance, the signing of the G20 common framework weighs on the country’s ability to access much needed private capital and should be a warning for other Sub-Saharan African countries looking to enter into the same or similar framework to overhaul a country’s debt burden. So far, Chad and Zambia have applied for debt overhauls under the same G20 framework.

The bearish bias in Nigerian local currency sovereign bonds remains intact as a combination of soaring inflation and mounting fiscal risks continue to weigh. While data released on Monday showed that headline inflation in Nigeria slowed in April for the first time in 20 months, the inflation rate in Africa’s largest economy remains above 18%, well above the Central Bank of Nigeria’s 6-9% inflation target. On the fiscal front, Nigeria’s budget deficit widened significantly during the pandemic, pushing the country’s debt pile even higher as government revenue shot higher and revenues tanked. 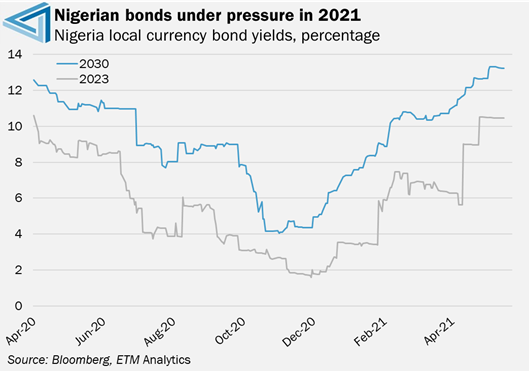 Looking ahead, with risks to the inflation and fiscal outlook tilted to the upside, the bearish bias in Nigerian bonds is set to persist. Bloomberg reported that President Muhammadu Buhari has sought Senate’s Approval to borrow $6.18bn in external loans to finance the 2021 NGN 5.6trn budget deficit. President Buhari’s request was contained in a letter sent to the President of the Senate on Tuesday. According to President Buhari, the loan will enable the government to fund critical infrastructural projects in transportation, health and education, among other sectors. While this will be growth support, additional lending will compound Nigeria’s fiscal challenges, adding to the already strong headwinds facing Nigerian bonds.