Core bond markets were under pressure yesterday, with USTs, bunds, and gilts all weakening as global risk sentiment improved. Yields climbed to one-week highs as a result, with a rally in equity markets and a rising ECB tightening premium weighing on the market. Reports also suggest that liquidity levels were a driver of the rise in yields yesterday, with trading volumes declining and transaction costs increasing, likely as investors take a more cautious approach ahead of several major central bank decisions over the next two weeks. Therefore, we could see liquidity levels remain relatively thin over the coming sessions, which could keep yields topside focussed.

Ethiopia: Ethiopia’s 2021-2022 tax revenue rose by 21% to ETB336.7bn but missed the ETB360bn target for the fiscal year running through July 7. Revenue rose despite various civil conflicts that put many businesses out of operation, rampant contraband, and forged sales receipts. According to the revenue ministry, roughly ETB196.2bn was from domestic tax and ETB140.5bn from customs duties and tariffs. Overall, missed revenue targets could further widen the budget deficit and hamper prospects of fiscal consolidation.

Kenya: In an update after the third review, the IMF said that Kenya had met program-performance targets for the period through December and that the request for waivers was related to the timing of the review, not the program performance. The lender added that waivers were needed because the final data was not yet available to evaluate end-June targets. The IMF also reiterated that Kenya is at a high risk of debt distress, and reducing debt vulnerabilities is a central goal of the IMF-supported program. The path of fiscal consolidation under the program is seen as placing the debt to GDP ratio firmly on a downward trajectory.

Nigeria: President Muhammadu Buhari yesterday unveiled the Nigerian National Petroleum Company Limited (NNPC). While still wholly owned by the state, the revamped NNPC is a limited liability company that is intended to operate independently of government and without access to public funding and direct government control. According to Buhari, the move is set to “transform the petroleum industry, strength-en its capacity and market relevance for the present and future global energy priorities.” The NNPC was reformed after the passage of a long-awaited law last August that overhauled the oil and gas sector. The government hopes the changes will help the company expand by enabling it to raise capital more easily. Moreover, the company will no longer be responsible for shouldering the expensive gasoline subsidy.

Nigeria: Speaking yesterday, Central Bank of Nigeria Governor Godwin Emefiele said that Nigerian lenders are impeding the use of the country’s digital currency because they are concerned about losing revenue from traditional banking sources. According to Emefiele, there is “apathy” at the banks. Unlike transfers or payments done using a bank’s platform or website, E-naira transactions do not attract any charge. Deposits in e-naira wallets also do not count as cash in the lender’s books. The e-naira undermines the investments banks have made in mobile banking services in a bid to boost fee and commission-based income.

Tanzania: The IMF board has approved a $1.05bn extended credit facility for Tanzania and plans to disburse $151.7mn immediately. Ac-cording to the Washington-based lender, the 40-month package will assist with the economic recovery and help address the impact of the war in Ukraine on the country. Moreover, the financing will also help enhance macroeconomic stability and underpin structural reforms. The IMF also said the spillover from Ukraine is stalling Tanzania’s recovery from the coronavirus pandemic and is exacerbating the country’s chal-lenges. The lender forecasts Tanzania’s economy to grow 4.7% this year, compared with 4.9% in 2021 and 4.8% in 2020. The financing is the nation’s first IMF policy-reform funding program in a decade and comes after the Washington-based lender raised Tanzania’s risk of debt distress to moderate from low in September.

The Nigerian naira in the parallel market plunged to a fresh low of NGN625 per dollar yesterday amid worsening dollar scarcity. The naira has broken through a series of record lows against the dollar this year as increased dollar demand has forced the Central Bank of Nigeria (CBN) to cut down on dollar sales, creating a shortage of the currency in the market. This has forced individuals and firms to turn to the parallel market. More recently, dollar demand has worsened on the back of individuals traveling for the summer holiday and the rising demand for fuel and diesel imports to ease incessant power outages crippling the economy.

The weakening in the parallel market has therefore driven the spread with the official rate wider. At yesterday’s official close of just above NGN422 per dollar, the premium is now around 48%. Yesterday, the official rate was firmer on the back of the CBN’s 100bp rate hike. 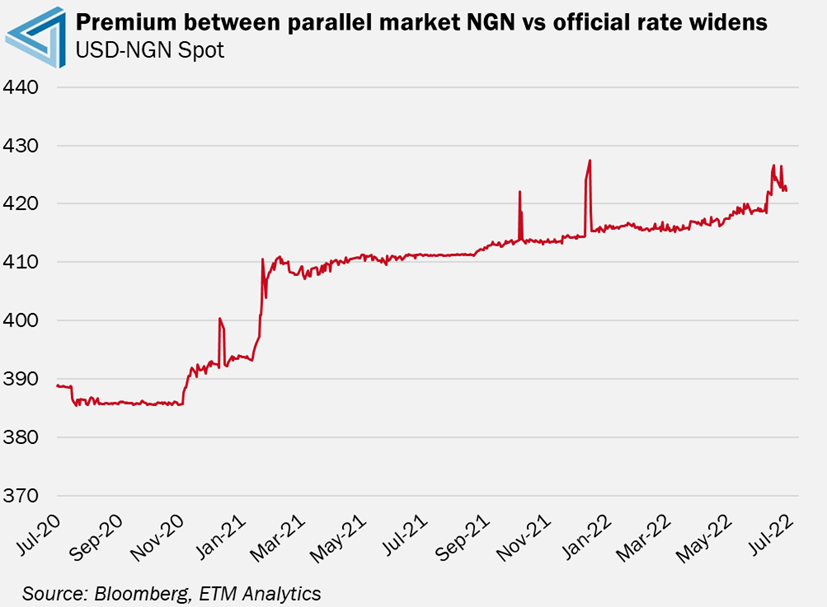 Kenyan Eurobonds have come off their recent lows following the news that the IMF has agreed to finally disburse a $235mn loan to Kenya as some of the lender’s targets have now been met. The IMF’s disbursements to Kenya now total $1.21bn for this program, which was approved in April last year. The total agreed upon in the initial agreement was roughly $2.34bn. The Washington-based lender did, however, note that the risk for the program is skewed to the downside. Disruptions from the war in Ukraine, tighter global monetary conditions, and rising food insecurity are all risks facing Kenya that are offsetting what has been a relatively robust economic recovery so far.

These downside risks, as well as the fact that some of the program’s goals were delayed, suggest that Kenyan Eurobonds are likely to remain under some significant pressure. The country remains at high risk of debt distress, and unless it can reduce its vulnerabilities, further disbursements from the IMF could be delayed, and yields on its Eurobonds could continue to surge. Last week, the 2024-maturing tenor saw its yield breach the 20.00% threshold, and while the bond has rebounded marginally this week, the bias remains firmly to the upside for yields.

This surge in yields also suggests that Kenya will not be able to tap the primary market anytime soon to alleviate any near-term funding pressures. This has already been evidenced by the cancellation of a $1bn Eurobond issuance earlier due to unfavourable market pricing. 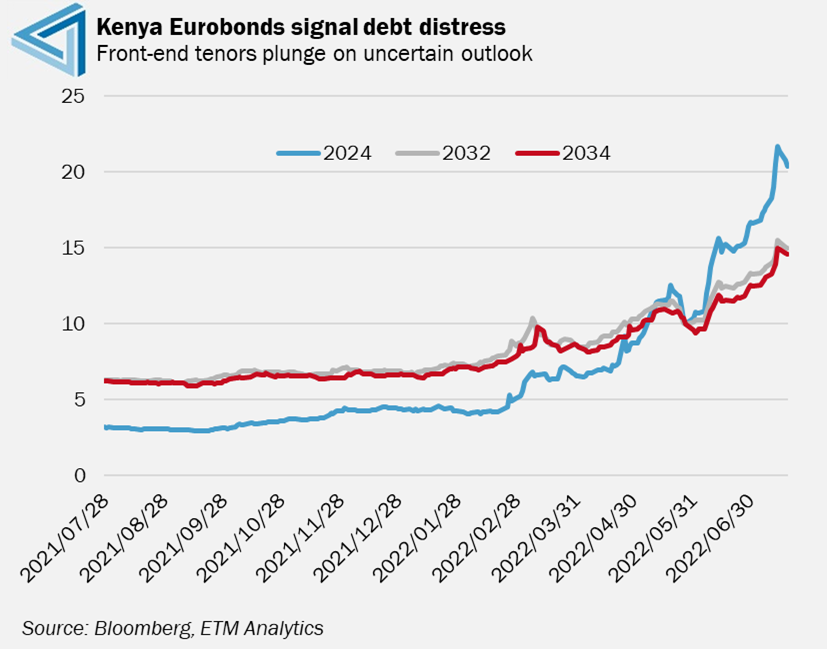 Soaring inflation has been one of main topics at the moment, and as a result of weak currencies in Africa, interest rate hikes have been very common. A lot of African monetary policy committees have been increasing interest rates in an attempt to fight high inflation and currency weakness. There are still risks to further currency weakness in the coming months amid the potential slowing in China’s economy, expectations of more aggressive rate hikes by the US Fed, and fears of a global recession which will increase investor appetite for dollars and lead to a sell-off in African debt. As a result, Nigeria’s central bank hiked rates by more than expected yesterday to 14% from 13%. The decision was unanimous, although six members voted to raise by 100bp, three by 50bp and one each for increases of 75bp and 150bp. The effectiveness of using interest rates to curb such high inflation in Nigeria is questionable, given that price increases are mainly being driven by supply constraints. There is also insecurity in food-producing areas of the country due to poor infrastructure, keeping food prices elevated as the country is forced to accept international food prices. Until the country’s economic and fiscal conditions improve, it is unlikely that Nigeria will have the ability to become less reliant on imports, meaning that it will be subjected to movements in international prices. Meanwhile, money supply can sometimes be considered to be a leading indicator for what may happen with inflation in the future. In Nigeria, money supply has increased by around 60% since the beginning of this year. Increased money supply implies that people are more likely to absorb costs, and therefore high money supply growth can be an indication that inflation may remain elevated. With the central bank’s recent rate hikes, money supply growth is expected to slow. However, it must be noted that it normally takes time for the impact of this to be reflected. Therefore, we may see inflation remain high for the coming months, meaning there is a chance of further interest rate hikes. Given the extent of the hikes, money supply growth, especially private sector credit growth, should start to slow, which could then see inflation start to ease towards the back end of the year. 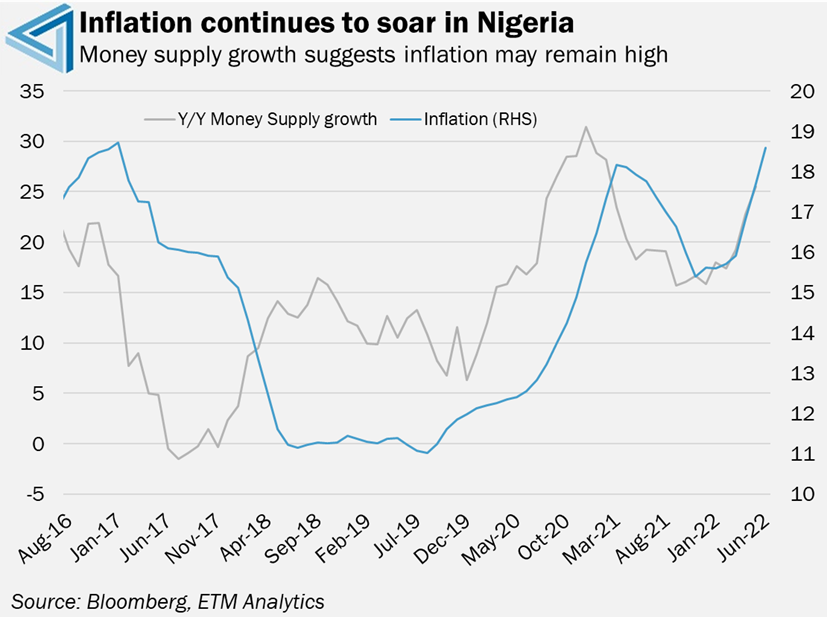