Industrial metals have responded to further warnings from Beijing. The Chinese regulator has fired a shot across the bow of industrial metal companies saying that they need to maintain “normal market order” following significant gains in metal prices this year. Reuters reported the following- The NDRC, China's top economic planner, along with the industry ministry, the state-owned assets regulator, the State Administration of Market Regulation, and the China Securities Regulatory Commission held the talks on Sunday with major domestic commodity companies and urged them not to drive up prices, according to the statement. The statement warned that companies "should not collude with each other to manipulate market prices ... hoard goods and drive up prices."  The regulators pledged they would monitor the commodity market and strengthen inspections for both futures and spot markets. Not surprisingly, we have seen base metals tumble this morning in the Asian session.

US Treasury yields slipped a little further on Friday despite a report which showed that US manufacturing activity rose to the highest levels in more than a decade. One or two data releases have alluded to a bumpy recovery and the possibility that the Fed will stop purchasing bonds that will detract from the broader business cycle. However, it will be interesting to see whether the dip in yields is sustained given the prospects for a strong rise in global inflationary pressures and the likelihood that stronger economic growth in time, will help boost prices given how monetary stimulus has been so aggressive.

In the FX market, the USD remains on the defensive this morning as it struggles to make back any ground, especially with US Treasury yields still dipping and the authorities confirming that they are in no hurry to remove fiscal and monetary stimulus. Technically, the bias remains to the downside and with no significant data scheduled for release today, investors may well tread water for a little while longer as they search for a catalyst to the move.

South Africa: S&P affirmed SA’s long-term foreign-currency debt of ‘BB-‘, being three notches below investment grade, and kept the local currency debt rating at BB, both with a stable outlook. Fitch meanwhile maintained its negative outlook on SA debt, keeping its rating of long-term local and foreign currency debt at ‘BB-‘. While the risks that government’s fiscal consolidation and debt stabilisation plans face have not abated, ratings agencies appear to be giving the government some room to enact plans outlined in the February budget.

Morocco: Headline inflation in Morocco rose sharply in April, coming in at 1.4% y/y compared with 0.1% y/y in March. The April reading marked the fastest pace of growth in seven months and is higher than the 0.9% recorded during the same period in 2020. The notable surge in headline inflation was driven by an increase in the cost of transport, clothing and footwear, furniture and households and miscellaneous goods. Although headline inflation jumped higher in April, it remains benign, suggesting that the Bank Al-Maghrib has room to support the economy. It must also be noted that there are low base effects to consider when looking at the April reading, given the impact of the COVID-19 outbreak last year.

Egypt: An Egyptian court rejected a new appeal by the owners of the Ever Given ship that got stuck in the Suez Canal, effectively allowing a seizure order for the vessel to stand. The latest ruling marks the second time the Japanese-based owners lost a bid to have the seizure order lifted. Recall that the Suez Canal Authority is holding the Ever Given until claims of more than $900m in damages are paid. In addition, the appeals court in Ismailia also referred the lawsuit to the lower trial court.

Ethiopia: The US government is reportedly preparing economic sanctions against Ethiopia over the Tigray conflict. The sanctions, if confirmed, is likely to halt financing from the US and loans by international financial institutions. This is also likely to set back relations between the two allies in Ethiopia's fight against Islamist extremism. According to two people familiar with the matter, the sanctions being considered are likely to affect finance to support Ethiopia’s budget and will include a request that the World Bank and the IMF withhold funding. With Ethiopia being a big recipient of foreign aid, economic sanctions would also pile pressure on the country’s government finances.

Uganda: The Finance Ministry of Uganda revealed that the nation’s trade deficit widened from $152.9mn in February to $216.4mn in March. The notable widening of the trade deficit gap resulted from the increase in the imports bill, which offset the exports receipts. Specifically, imports increased from $600.0mn in February to $660.5mn, while exports fell from $447.1mn in February to $444.1mn in March. The decline in exports is attributed to lower earnings from the export of maise, mineral products and flowers. Although the trade deficit widened in March, it is still narrower than the 6.1% deficit recorded during March 2020. With imports likely to continue to rise in the months ahead as domestic demand recovers and the economy grows, Uganda’s trade deficit is likely to widen further.

Kenya: Fiscal dynamics in Kenya continue to deteriorate, with the latest data showing an increase in gross public debt. According to the Kenyan Treasury, public debt swelled from KES 6.28trn a year earlier to KES 7.34trn in March. The increase in the debt stock can be attributed to the external loan disbursements, exchange-rate fluctuations, and domestic debt uptake during the period. Kenya’s fiscal deficit excluding grants came in at KES 575.4bn or 5.2% of GDP in March. The deterioration in fiscal dynamics is likely to weigh on domestic assets going forward.

Private sector credit growth (PSCE) slowed for the third straight month in April, decelerating to 10.1% y/y from 10.6% y/y in March. The deceleration in credit growth was in part driven by weak domestic demand and uncertainty relating to the COVID-19 pandemic, which deters businesses and households from borrowing.

Notwithstanding the deceleration in money supply and credit growth in April, Nigeria’s monetary environment remains loose. This suggests that risks to the inflation outlook are tilted to the upside. With inflation risks tilted to the upside and the central bank committed to keeping rates on hold until it is confident in the strength of the economic recovery, real interest rates in Nigeria are expected to remain anchored deep in negative territory. Nigeria’s deep negative rates have come as a headwind for the Nigerian naira (NGN). On a year-to-date basis, the NGN has lost almost 5.00% against the USD and is currently trading at its weakest level on record. Looking ahead, with the CBN likely to maintain a low policy rate despite the upside risk to inflation, the NGN is expected to remain under pressure. 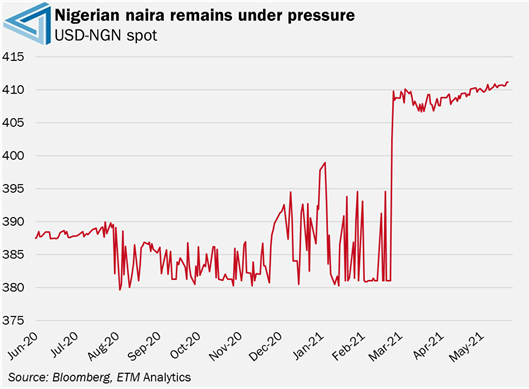 While emerging market bonds have come under pressure this year amid the reflation trade, frontier market bonds have continued to strengthen as investor appetite for high-yielding assets in a world of record-low interest rates persists. With inflation expectations surging in recent months, driven by soaring commodity and food prices, sovereign bonds of the least developed nations have continued to lure investors as their maturity profiles tend to be of shorter duration, meaning that they are less sensitive to rising inflation expectations.

A breakdown of JP Morgan’s bond indices shows that the average duration of frontier-market sovereign bonds is around 6.0 years, while the average maturity of emerging markets is 7.9 years. Frontier market bonds, which includes African sovereign bonds, offer investors the combination of high yields with relatively lower maturity risk. Bloomberg reported that money managers who specialise in frontier assets are almost united in favouring Africa, saying the region will benefit the most from rising raw material prices.

In Africa, money managers across the board appear to be favouring sovereign bonds from Angola, Ghana and Nigeria, as these countries are expected to benefit the most from the marked recovery in international oil prices. Despite becoming the first African country to default on its debt amidst the COVID-19 pandemic, money managers haven't shied away from Zambian bonds, with investors hopeful that the significant rally in copper prices should bode well for Zambian bonds going forward. Adding to this has been the commitment from the likes of the International Monetary Fund to providing fiscal reprieve for the world’s poorest country’s which has helped alleviate some fiscal concern amongst investors.

In a world of low yields in the developed market space against the backdrop of soaring commodity prices, African bonds are expected to continue being favoured by investors as they take advantage of the high yields on offer. Therefore, we could see African bonds continue to outperform their emerging market peers in the months ahead. Looking at JP Morgan bond indices, frontier market bonds have returned 2.6% since the start of the year, while emerging-market debt has lost around 2.0% over the same period.

Data published by the statistics agency on Friday revealed that economic activity in Nigeria expanded in the first three months of the year.  Specifically, gross domestic product growth in Nigeria accelerated to 0.51% y/y in Q1 from 0.11% in the final quarter of 2020. The recovery in Nigeria’s economy comes on the back of soaring international oil prices, recovery in global demand and easing of virus containment measures. 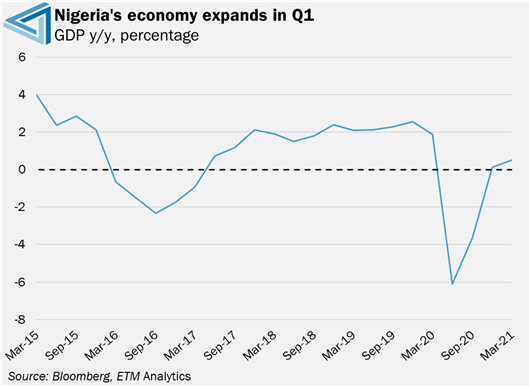 While it is encouraging to see that the pace of Nigeria’s economic recovery gained pace in Q1, it is worth pointing out that the growth rate was less pronounced than consensus expectations, with analysts polled by Bloomberg pencilling in growth of 0.90%. A breakdown of the GDP report revealed that the oil sector contracted by 2.21% y/y in Q1, while the non-oil sector grew by 0.79% in the same period. Note that the non-oil sector accounted for 90.75% of GDP in Q1.

Growth in the non-oil sector was driven primarily by the information and communication sector in Q1. Other sectors that expanded in Q1 included agriculture, manufacturing, real estate, construction and human health & social services. Nigeria’s crude output rose to 1.72mn barrels per day in Q1 from 1.56mn in the last quarter of 2020. Despite rising from the previous period, Nigeria’s crude production is still below pre-pandemic levels. Note that while the oil sector contributes to less than 10% of the country’s economy, the oil sector is Nigeria’s largest foreign currency earner.

Going forward, we expect economic activity to rebound this year as the economy is reopened and the population is vaccinated. However, the recovery is expected to be lacklustre as structural impediments to growth and lingering risks pertaining to the COVID-19 pandemic continue to weigh. With risks to the growth outlook still tilted firmly to the downside, the Central Bank of Nigeria has communicated that it will keep rates on hold in the months ahead, despite above-target inflation, until it is confident in the strength of the economic recovery.