Solid revenues and operating efficiencies partially offset margin pressures. The company reported in line with our estimates, highlighting the outstanding volume performance in all regions, increasing 8.4% YoY to 925.9 MCU’s, driven by Mexico and Central America. Likewise, consolidated prices increased 13.6% YoY, outpacing inflation. As a result, revenues increased 18.2% YoY. Nevertheless, pressure on gross margin persists, as costs grew more than revenues by 19.6% YoY, due to the increase in PET and sweeteners. EBITDA advanced 14.0% YoY, with the respective margin at 18.6% (-70bps), due to a non-recurring income of MXN 620 million received last year (related to tax recoveries in Brazil). However, on a comparable basis, EBITDA would have increased 22.1% YoY and the respective margin +60bps. Finally, net income rose 27.9% YoY as a result of a better operating performance alongside a decrease in the comprehensive cost of financing (-33.7% YoY), explained by a decrease in net interest expense. Despite the challenging backdrop, we rate KOF as resilient. Although future growth remains constrained subject to strategic transactions that could trigger higher value, after integrating recent figures, we anticipate revenue and EBITDA growth by 2023 of 7.4% YoY and 9.4% YoY, respectively. With a valuation that reflects much of the outlook. Our recommendation is to HOLD. 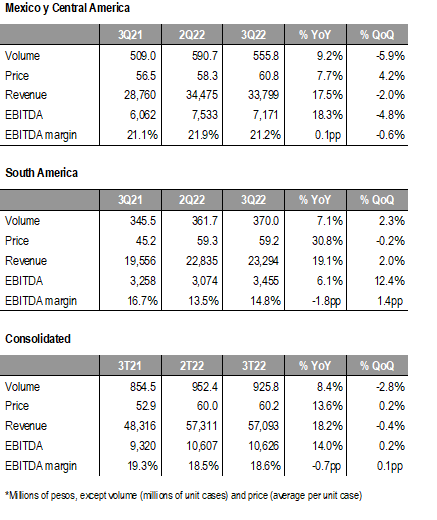 LatAm operations will benefit revenues; however, expansion catalysts are limited.

2023 is shaping up to be a year of economic slowdown, but KOF could be well positioned to face a more challenging backdrop given Mexico’s resilient demand. Meanwhile, KOF's presence in LatAm should also benefit revenues. This, due to the fact of good consumption levels in the region given an environment of relative financial stability, largely due to the anticipated start of interest rate hikes, particularly in its two main markets: Brazil and Mexico. We also expect profitability improvements due to a better COGS outlook. In our baseline scenario, inflation will remain high -both for the producer and the consumer- although it will gradually moderate over the next year. This would go hand in hand with supply chains disruptions improvements. In this regard, and according to the New York Fed's global pressures index, this indicator fell for the fifth consecutive month in September. Moreover, adjustments so far this year suggest that global pressures are beginning to approach average levels. The economic slowdown, from which the region will not escape, will probably limit demand pressures on input prices. However, risks remain, especially those related to the effect of climate change on crop yields. Meanwhile, relatively inelastic demand would help selling prices. Finally, we believe that growth in the coming years is limited (6.0% and 5.7% average of annual sales and EBITDA, respectively, for the five-year period 2023-2028), as the strategies implemented mature. This, subject to any strategic transactions that may occur. We believe that the leverage of its distribution strategy, offering different companies (P&G, Kellogs and Diageo) the option of transferring their products, is favorable. However, it is still in very early stages to: (1) monetize the potential growth it could achieve, and (2) substantially impact its margins, as well as the intensity and efficiency in the use of its working capital.

Based on a conservative economic outlook, we anticipate revenue growth of 16.4% YoY for 2022, supported by volume recovery in all regions of +9.3% YoY, as well as positive results from pricing strategies, in line with inflation. As for 2023, we expect carryover to remain ahead of inflation in Mexico (main location accounting for 47.7% of LTM sales). We anticipate prices to advance 6.0% YoY, or 60bps above inflation, which we estimate to end at 5.4% next year. As a result, we forecast total revenue growth of 7.4% YoY. We also foresee a gross margin improvement, from 44.1% YoY in 2022 to 44.8% (+74bps) in 2023, mainly explained by a decrease in two of its main costs: PET and sugar.

Bloomberg consensus anticipates an average price for Brent (~20% of costs) of $98.88/bbl in 2022 and by 2023 it could drop to an average of $78.08/bbl, representing a contraction of 26.6% YoY. For sugar,(~28% of costs) an average price of $18.51/lb is estimated in 2022 and a $17.46/lb price for 2023, which would represent a 6.0% YoY decline. Given the rebound already observed in these and other inputs, we estimate COGS to upsurge 19.5% YoY. While for 2023, we foresee an increase of only 6.0% YoY, below-expected revenue growth and driven by higher volume sales. Profitability would be pressured this year, with EBITDA increasing only 9.3% YoY and the respective margin at 18.9%, (-100bps YoY). However, in 2023, EBITDA would advance 9.9% YoY, assuming an outlook of lower raw material costs and higher operating efficiencies, anticipating the same margin to expand 44bps to 19.2%. Finally, at bottom-line, we anticipate relatively favorable results considering the difficult environment. In 2022, we expect an 8.7% YoY growth in net income thanks to a -2.7% YoY decline in net interest expense and a lower foreign exchange loss from the appreciation of the peso against other currencies. As for 2023, we anticipate a 12.8% YoY earnings hike due to lower production costs that will benefit operating margins, lower interest paid compared to the previous year (-5.2% YoY), and a foreign exchange gain from the effect of the anticipated peso depreciation. Finally, the company would exercise a Capex of MXN 12.1 billion in 2023 (-6.0% YoY), in line with the company's guidance.

Broken down by region

In Mexico and Central America

For the current year, we expect revenue growth of 16% YoY given the increase in household mobility relative to pre-pandemic levels and the on-premise and traditional channels’ recovery. While the company still has a simple comparison base, volume growth has exceeded our expectations (+6.5% YoY). We expect this trend to consolidate, with an additional boost coming from a good demand dynamism due to the World Cup. In terms of profitability, we believe that margins will continue to be pressured despite efficient raw material hedging’s. As the company mentioned to us, hedged input prices are already at higher levels relative to what was hedged in 2021. With this in mind, we anticipate +11.8% YoY in EBITDA for 2022, with the margin at 21.8% (-54bps).

For 2023, it is important to mention that we estimate GDP growth of 1.0% for the Mexican economy. It is important to remember that, historically, Coca-Cola FEMSA's volumes have grown in line with GDP. As a result, we estimate the same magnitude of growth for the latter. Meanwhile, prices have grown slightly above inflation. Based on the above, we estimate a 7.9% YoY increase in total sales. In addition to the constraint from general economic activity, we anticipate headwinds derived mainly from the delay in the on-premise channel, although the full reopening of schools after the pandemic could offset this effect to some extent. Nevertheless, the strengthening of the peso against other functional currencies will help with an additional boost to peso-denominated sales. Meanwhile, for 2023, we estimate 10.9% YoY growth with a margin expansion of +61bps to 22.4%.

In South America, KOF has maintained solid volumes (+11.7% YoY) despite the difficult comparison base. The latter is mainly due to the redistribution of the beer portfolio in Brazil, offset by increased mobility. By year-end, we believe this trend could continue, supported by favorable demand, good weather in the region, and pricing initiatives. As a result, we expect 16.0% YoY revenue growth in 2022. Moving to 2023, we remain conservative given a possible slowdown in consumption due to additional inflationary pressures and an uncertain scenario due to the new fiscal framework to be adopted by the winner of the presidential elections in Brazil. With this, Bloomberg consensus anticipates an average exchange rate for 2023 of USD/BRL $5.25 compared to USD/BRL $5.17 for 2022, representing a real depreciation of 1.3% YoY. Based on the above, we estimate revenues to increase 7.0% YoY, with volume growth of 1.5% YoY, above the 1.0% of GDP estimated for Brazil.

In Argentina, we continue to expect double-digit revenues for this year at 26.0% YoY and for next year at 22.0% YoY. However, we must be very cautious due to the strong distortion introduced by high inflation, with the company passing it on to final prices.

Finally, in Colombia we anticipate +7.0% YoY in sales for 2023, mainly due to the pricing strategy already mentioned and used throughout the region.

During 2021, the company returned value to its shareholders through the distribution of 82% of net income (payout ratio). Therefore, by the end of 2022 we estimate a payout ratio of 90%, which would represent a total payout of MXN 8.39 per share based on our forecasts. With the payments already made so far, MXN 2.96 per share remains outstanding, equivalent to a yield of ~2.5%. Given the challenging 2023 scenario, we believe the company will be more conservative, cutting its payout ratio to 40%. With an estimated 2023 net income of MXN 17 billion, the company would be paying an annual dividend of MXN 4.10 per share, representing a yield of 3.4% relative to the current price.

To calculate the theoretical value of KOF shares, we used a discounted cash flow (DCF) valuation model, obtaining a Target Price per share of MXN 134.00. This would represent a 2023E EV/EBITDA multiple of 7.0x, slightly below the current level of 7.2x. This multiple considers a limited growth potential and no clear catalysts for a revaluation. In addition, the current higher interest rate backdrop could be prolonged, limiting higher valuations. Our price target offers a yield of 16.8% on the current price (including 5.9% for dividends), which is similar to our discount rate. Therefore, we give a recommendation to HOLD

We use a discount rate (WACC) of 12.3%, assuming a cost of debt of 8.7% and a cost of capital (CAPM) of 14.5%. Likewise, for the latter we consider a risk-free rate of 9.7% (closing 2023E of the 10-year Mexican bond), a beta of 0.8 and a market risk premium of 6.0%. As for terminal value, we assume an FV/EBITDA multiple of 7.3x, in line with the median of global peers (see Relative Valuation table), although below Arca Continental. This is justified because Ac presents (1) higher profitability, (2) the prospect of better earnings going forward given the opportunity for further market consolidation in the U.S. and (3) exposure to stronger currencies. 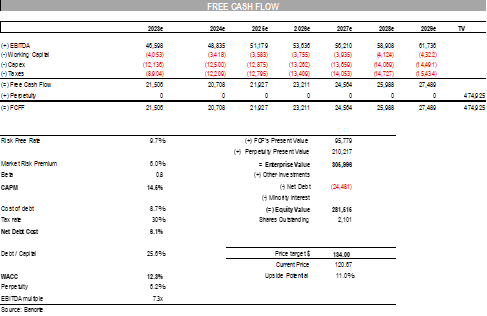 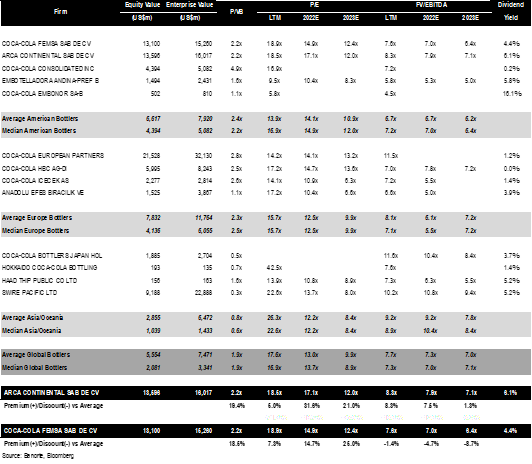