Remains resilient to the complex environment

Subscriber growth and EBITDA margin improvement continues. In 3Q22 mobile subscribers grew 0.9% q/q (+2.9 million q/q) and RGUs increased 7.5% y/y. In turn, ARPU fell 5.4% y/y, with the largest declines in Chile (-26%) and Argentina (-21%). Service revenues rose 3.0% y/y, but equipment sales declined 5.4% y/y. Considering this, consolidated revenues increased 1.8% y/y to MXN 214.5 billion. Variations in profitability were mixed, with Ecuador leading the advances (+1.3pp), but Mexico standing out with +0.5pp and Brazil with +0.3pp, while Chile, CA and Argentina presented the greatest pressures (+0.3pp). In the aggregate, the bias was positive and consolidated EBITDA grew 2.3% y/y to MXN 83.2 billion, with margin improvement of 0.2pp to 38.8%. Net income exceeded our estimate, growing 13.7% y/y, due to operating progress and lower foreign exchange losses (-83.9%), partially offset by higher taxes (+188.9%). While challenging environment has dampened growth prospects, we believe AMX's results will continue to be defensive. In addition, strategies to detonate value, cost and expense control and operating efficiencies should benefit profitability, which coupled with a solid balance sheet (1.7x ND/EBITDA after Sitios Latam spin-off) and an attractive valuation, makes our view favorable for the stock.

Operating performance per country as of 3Q22 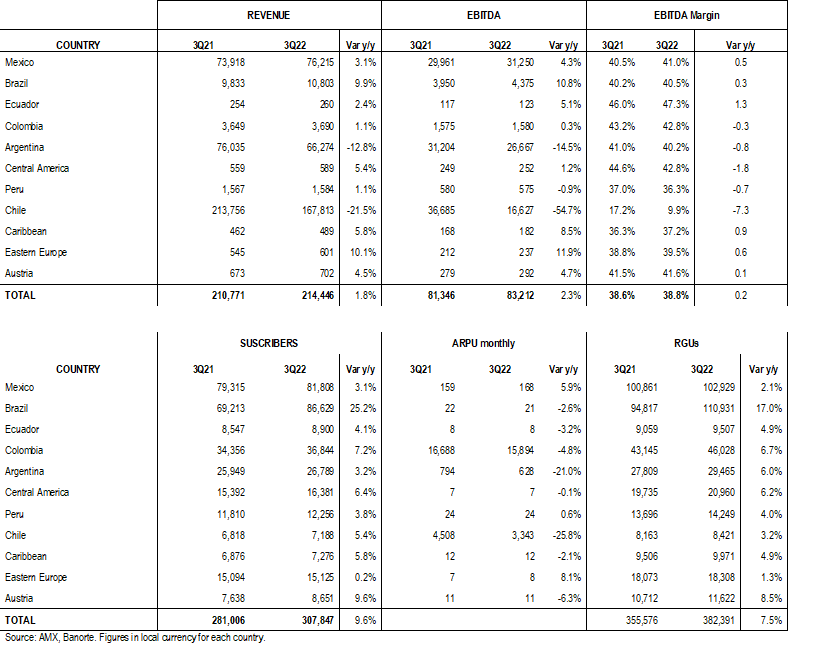 Appropriate strategy reflecting resilience in a complex scenario. During 2022, the risks in the environment have become more pronounced, pointing to an increasingly weaker economic dynamism, derived from more aggressive monetary policies by central bankers in the face of persistent inflationary pressures. This has even led to an increase in the probability of a global recession in 2023. In this context, the figures of AMX (proforma after TracFone’s sale) have shown progress, accompanied by higher profitability, while by 2023 the defensive nature of the sector would be a relevant factor for the continuation of the growth path.

We expect connectivity needs to continue to drive organic growth in mobile subscribers, broadband access and data traffic, and therefore, also in the results. We also note the strategies of cost and expense discipline, operational efficiencies (supported by the digital transformation) and a better mix in margins ‒following TracFone’s sale with ~12% margin, the incorporation of Oi in Brazil with future synergies, the exit in Panama and the reconfiguration of its operations in Chile with- ~18% margin, through the creation of a 50:50 joint venture. This positions AMX favorably to continue to be a leader in offering integrated solutions, in the midst of the 5G technology deployment process, taking advantage of the strong demand for data.

2022 Expectations. Considering the above and adjusting for the aforementioned transactions, by 2022 we estimate that the base of fixed-line RGUs might have a slight increase of 0.2% to 73.3 million, which would represent 145 thousand net additions. For the cellular subscriber base, we anticipate an 8.6% annual rise to 303.7 million, that is, 24.1 million net additions, of which 12.9 million are due to the integration of Oi, and therefore, operations in Brazil would end the year with 87 million (+23.3% y/y). As a result, service revenues would increase 3.5% y/y, with a lower ARPU (-11% y/y) due to an unfavorable exchange rate effect, while equipment revenues would decrease 1.1% due to a lower volume of handsets sold.

Net income would fall more than 60% y/y to MXN 77.3 billion, due to the significant amount of income from discontinued operations in 2021 of MXN 196.0 billion (MXN 112.7 billion from TracFone’s sale), higher financial expenses related to derivative positions (+103% y/y) and a normalization in the effective tax rate (33%e vs. 28% in 2021), partially offset by a decrease of 59.3% in Comprehensive Financing Cost ‒in the face of a MXN 17.8 billion foreign exchange gain vs. a loss in 2021 of MXN 17.0 billion, resulting from a favorable foreign exchange environment‒. Meanwhile, we estimate Capex at MXN 161.9 billion ($8 billion, in line with company's guidance). Finally, we expect leverage to close the year at 1.7x ND/EBITDA, similar to current levels.

Profitable expansion in 2023. Given the latent possibility of a global recession next year, we have taken a conservative stance on our estimates. Nevertheless, company's figures continue to show resilience to the environment, with slight advances and an improvement in margins due to the aforementioned strategies. In this sense, by 2023, the base of fixed-line RGUs would increase 0.3% y/y to 73.5 million (+210 thousand net additions) and cellular subscribers would increase 2.5% to 311.2 million, representing 7.5 million net additions. Service revenues would increase by 4.1% y/y, with a decline in ARPU (-1% y/y), while revenues from equipment sales would continue to fall (-4.8%), due to lower handset unit sales. As a result, AMX would record consolidated revenues of MXN 864.1 billion (+0.5%).

Meanwhile, cost and expense control, as well as synergies and operating efficiencies would reflect a further increase in EBITDA of 2.5% to MXN 339.1 billion, with a margin improvement of 0.7pp to 39.2%. Synergies in Brazil, after the integration of Oi in 2Q22, are the ones that would support higher profitability. Thus, in that country, revenue growth would be 7.5% (+0.9% in subscribers) and in EBITDA would be 15.2%, with a margin of 43.7% (+2.9pp). In Mexico, we expect revenues to increase 1.9% (+2.4% subscribers), and EBITDA to grow in the same proportion, with the margin unchanged at 41.6%e.

Finally, the company would continue to have a solid financial balance sheet, with a 1.5x ND/EBITDA by year-end 2023. We anticipate a shareholder payout with a ~4% yield at current prices, comprised of a dividend payment with a 2.7% yield and the remainder through share buybacks.

Valuation and PT of MXN 20.00. We recommend BUY

To derive AMX’s theorical value, we use the multiples valuation methodology. It should be noted that the latent risks in the environment, including lower economic growth and high inflationary pressures, as well as the expectation of a recession in 2023, have reflected a negative impact on the shares of the companies in the sector, where specifically for AMX, the adjustment has been   -21% so far this year.

However, the company has shown resilient results and has implemented strategies to detonate value, which we consider positive. This should also support forward profitability, as previously mentioned. Assuming a conservative stance and a 2023e target FV/EBITDA multiple of 5.5x, we obtain a 2023e PT of MXN 20.00 per share, which represents an estimated yield of 26.1%, including the return on shareholder remuneration expected for the following year. This multiple is similar to the 5.5x average for the year and is equivalent to a 5.5% discount vs the median of comparable companies 2023e of 5.8x, reflecting an attractive valuation. Although the target multiple is above the current 5.0x and we still expect volatility in the short term in a restrictive scenario, as there is clarity in the environment with more signals about the magnitude of the recession and the possibility of the start of the accommodative cycle in 2023, we could see more normalized valuations given company's strengths. Thus, in our opinion, AMX's fundamentals continue to be solid, and we recommend BUY, reiterating its leadership position in the regions where it operates, the prospect of sustained growth and its healthy financial situation, which make it an attractive option in a very complex environment. 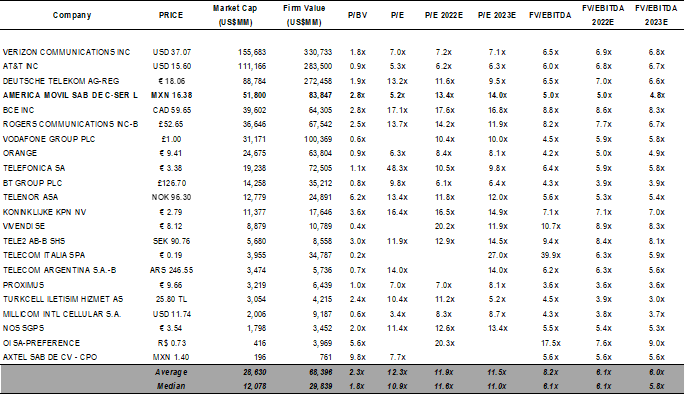