Profitability pressures in line with expectations

Inflation pressures profitability, while maintaining positive Same Store Sales performance. The company's figures remained in line with our estimates with revenue growth of 12.4% YoY to MXN 197.9 billion, although with profitability pressures. This growth was mainly driven by a 15.0% YoY revenue increase in CA, followed by Mexico with a 12.3% YoY growth. Particularly, Mexico registered an 11.1% YoY increase in SSS, reflecting a positive 40bps differential vs ANTAD, favored by back-to-school season, despite the impact on discretionary categories consumption due to higher inflation. In turn, CA achieved a 14.4% SSS expansion. As a result, EBITDA increased 5.6% to MXN 21.2 billion with the margin at 10.7% (-0.7pp), where an extraordinary effect was registered in the same period of 2021 (+0.3pp). At a normalized basis, Mexico’s margin contraction was set to 11.0% (-0.4pp) due to a 17.2% YoY increase in expenses, partially offset by an expansion in CA profitability to 9.2% (+0.1pp). Finally, net income reached MXN 12.2 billion (10.0% YoY), supported by a 37.2% YoY reduction in net financial expenses. Despite backdrop challenges, business strategies position the company as defensive. We continue to favor Walmex’s leadership, execution, and marketability, anticipating a resilient position given the environment risks. Therefore, our recommendation is to HOLD.

WALMEX's figures have proven to be positive and resilient throughout 2022, where the new store openings and the increase in social mobility have contributed to a very favorable performance in 1H22.  However, profitability pressures from higher costs and investment expenses also stood out, representing short-term challenges in an environment of high inflation levels in Mexico and Central America (CA), as well as negative impacts caused by supply chains disruptions.  Going forward, concerns about a global economic slowdown remains among investors, reflecting a series of operational efficiencies challenges for the company.

After integrating the latest quarter results, we anticipate that basic products demand will remain solid this year as the economy continues to be dynamic. The continuity in the development of long-term strategies presented during 'Walmex Day', based on technological innovation, processes, and more specialized services to customers, highlighting "Omnichannel" and "Cashi" as expansion pillars for the next few years, along with more store openings, which will be pillars for capturing the consumer’s attention. On a more normalized basis, for 2022 outlook we anticipate revenue growth to reach 11.0% YoY (SSS +7.8% YoY) to MXN 816.7 billion, with an advance of 3.0% YoY in sales floor growth, driven mainly by an 11.9% YoY increase in Mexico (SSS +7.2% YoY) and 9.4% in Central America (SSS +10.2% YoY). Based on the above, we expect EBITDA to rise 9.6% YoY to MXN 89 billion, with a margin of 10.9% (-0.1pp), reflecting contractions in Mexico's gross margins towards levels of 22.9% from 23.2% in 2021, as well as in Central America from 24.1% in 2021 to 23.8% in 2022. In turn, we expect net interest income be slightly higher at MXN 5.8 billion in 2022 from MXN 5.6 billion, due to a higher interest rate scenario. We expect net income to reach MXN 49.7 billion, reflecting an increase of 12.6% YoY due the company's operations increase.

However, we consider that 2023 would be a context in which restrictive monetary policy in Mexico and in several parts of the world will put pressure on consumption, being foreseeable to opt for a more conservative position through a slowdown in company’s growth. Based on the above, we expect an 8.1% YoY increase in 2023’s revenues to MXN 882.874 billion (SSS of +7.6%) and sales floor expansion of 2.8%.  Based on the above, we anticipate a 9.1% YoY revenue growth in Mexico (SSS of +8.8% YoY), and a 3.0% expansion in Central America (SSS +2.0% YoY). Due to the above, we forecast EBITDA to rose 10.8% YoY to MXN 9.8 million, representing a margin of 11.2% (+0. 3pp), similar to pre-pandemic levels, as a result of the possibility that a more encouraging cost environment is presented, so we forecast gross margins to reach 22. 6% (-0.3pp) in Mexico, and 23.8% in Central America. On the other hand, financial benefit would be higher, continuing the trend of high interest rates, therefore, we foresee it to reach MXN 6.134 million (+6.6% YoY). Based on the above, we expect net income to increase 13.3% YoY to MXN 56.3 million.

Broken down by region in 2023...  For Mexico’s operations, we consider the opening of 137 stores, representing a total sale floor increase of 3.0% YoY, remaining in line with the CAPEX allocated by the company. Although we anticipate a backdrop of inflationary pressures during the beginning of 2023, we do not rule out the possible to rebound towards the second half of the year accompanied by lower cost pressures, resulting in a 9.1% YoY advance in revenues.

In Central America, we expect 889 new stores opening’s, reflecting an advance of 1.9% YoY increase in sales floor and a 3.0% YoY revenue growth. Although high costs’ environment could impact the region for a longer time, we believe that pricing strategies coupled with strict shrinkage control could contribute mitigate pressures in the second half of the year. Besides, we do not leave behind the possibility of structural strategies in the region’s business, implying a stance-rethinking, such as: 1) total or partial assets sales in CA 2) synergies from alliances with other companies in the region.

Solid capital structure will continue.  Financial strength stands out, which we expect to be kept over the next few years as growth continues and recalling that there’s any plan yet to issue new debt in order to finance at a faster rate of expansion. Regarding the leverage indicator, we anticipate that by the end of 2022 the company will have a Net Debt/EBITDA ratio of 0.1x (vs. 0.2x in 3Q22), as well as an estimated 0.0x in 2023, supporting the company’s positive outlook.  In terms of dividends, in 2022 it reached MXN 1.71, representing a 2.4% yield, while for 2023 we expect a dividend payment of MXN 1.95, reflecting a 2.7% yield. Finally, our forecast for 2023 total CAPEX is MXN 35.3 billion (+8.1% YoY), which represents around 4.0% of estimated revenues and in line with the company's strategy.

We recall that among the company's objectives is to achieve growth of around 7.0% compound annually until 2024; consolidate a double-digit ratio of E-commerce over total revenues (4.8% of revenues in 3Q22), as well as allocate 4.0% of CAPEX of total revenues, most likely until 2024, subsequently returning to historical levels of around 2.0%. Finally, among the long-term projects include the new Bajio distribution center, which is expected to start operations in 2026, allowing us to leverage operations and create synergies in the Omnichannel.

We maintain a conservative stance, considering a likely economic slowdown in all regions where the company operates, although we do not rule out more favorable conditions in the second half of the year. We use a multiple valuation methodology to obtain the company’s theoretical value. Assuming a target multiple 2023e FV/EBITDA of 15.0x similar to the current one at 15.1x, we obtain a 2023 PT of MXN 85.00 per share. That multiple is only slightly lower than the L5Y average of 15.2x, but below the trailing twelve months average of 16.2x. In our opinion and considering the strong fundamentals, the company is defensively positioned. However, given the potentially high interest rate environment, further revaluations could be limited for the moment.  Meanwhile, it is important to remember that the company's shares have always traded at a significant premium in comparison to its peer’s average (7.7x) given its leadership position and pricing strategies.  Our recommendation is to HOLD. 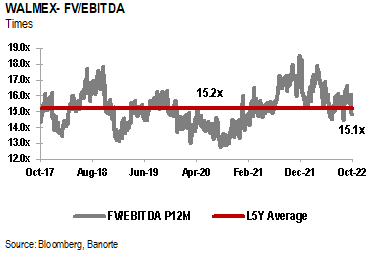 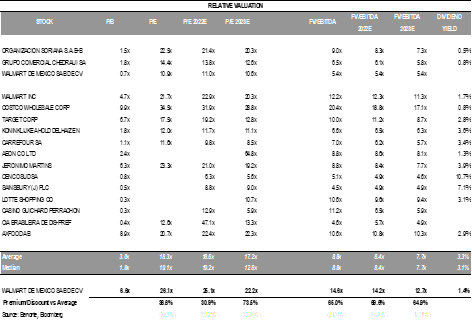