Growth accelerates, but with pressures in Europe

Despite further expansion, Europe's profitability contraction stands out. Alsea reported a strong increase in sales, which allowed us to consolidate a 25.5% YoY rose in revenues to MXN 17.5 billion (30.5% YoY in SSS), in line with our estimates, but below-expected profitability. South America continues to stand out with solid figures, registering a 51.9% YoY increase (+68.2% in SSS), explained by economic recovery and good results from digital strategies; followed by Mexico with an increase of 25.3% YoY (+23.5% YoY), supported by Starbuck’s, Burger King, and Domino’s. Europe recorded a 12.5% YoY growth, with coffee shops division standing out. Although higher sales drove EBITDA expansion of 10.6% YoY, the margin fell to 19.9% (-2.7pp), as improvements in Mexico (+0.8pp), and South America (+0.6pp) were offset by Europe’s due to a 10.6pp profitability contraction, integrating the 4.2pp impact of inflation-related costs increases. Finally, net income reached MXN 317 million (+83.1% YoY). Positive outlook, but important challenges remain. Going forward, we will continue to monitor cost strategies implementations, particularly in Europe, while keeping an eye on possible signs of a slowdown in consumption in coming quarters. Finally, we see a compelling valuation with a current FV/EBITDA of 5.3x vs. 5.5x. We give a recommendation to BUY.

The year has proven to be a period of strong recovery for the company's figures, considering an environment of greater social mobility alongside a strong consumption in all operating regions: Mexico (49% of 3Q22 revenues), Europe (32% in 3Q22), and South America (19% in 3Q22). However, as quarters have gone by, operating and input cost pressures have become increasingly evident. This has triggered a major challenge for the company in a scenario where high inflation levels will prevail for the time being and will most likely trigger a slowdown in consumption as a result of tighter monetary policies around the world.

After incorporating the latest results for the quarter, we are updating our estimates. Considering a favorable trend in consumption in all-operating regions, as well as positive results from the implementation of commercial strategies that include home delivery, with a 16.7% share of Alsea's consolidated sales as of 3Q22, we expect revenues for the year to be around MXN 68.6 billion, reflecting a 28.5% YoY increase (SSS +37.7%e). We expect Mexico's sales to grow 26.0% YoY (SSS +32.3%e), supported by a greater reactivation of mobility. In Europe, we project a 26.5% YoY rose (SSS +26.3%e), and in South America a 39.9% YoY expansion (SSS +50.7%e). Based on the relevant performance of operations in all regions, we anticipate EBITDA to end the year at MXN 14.8 billion (+20.1% YoY), representing a margin of 21.6% (-1.5pp YoY), where we consider the following levels for gross margins: Mexico at 63.7% (-1.1pp) and Europe at 68.4% (+2.9pp), recalling that it represents a profit per comparable basis due to the strong contractions in consumption that were registered in 2021 given COVID-19 resurgence, driving the margin towards 65.4% levels in the period (vs. 74.9% in 2020). Meanwhile, financial income is expected to be higher at MXN 4.0 billion (+18.5% YoY), mainly explained by a higher interest rate environment. Finally, we anticipate net income to reach MXN 1.9 billion (vs. MXN 1.1 billion in 2021).

Considering a more conservative stance for 2023, where profitability pressures could ease in the second half of the year and consumption could become more resilient, we expect total revenues to reach MXN 73.5 billion, reflecting a 7.1% YoY increase (SSS +5.0%e). We anticipate increases of 6.0% YoY in Mexico (SSS +4.9%e), 6.4% in Europe (SSS +3.4%e) and South America 11.1% YoY (SSS +5.0%e). Given the above and foreseeing a better outlook, we forecast EBITDA to reach MXN 16 billion with a margin of 21.8% (+0.2pp YoY). While for Mexico and South America, we anticipate that gross margins will start to recover in the second half of the year, reaching 64.3% (+0.6pp) and 57.3% (+0.2pp), respectively; although we are anticipating that Europe would be relatively stable, our assumptions already reflect the important pressures, considering that high energy costs could continue to have a significant impact during the first half of the year due to the economic situation in the region, before rebounding in the second half, ending at 68.4% (vs. 74.9% in 2020). In turn, we anticipate net financial income to reach MXN 4.6 billion (+14.2% YoY). Finally, we forecast net income at MXN 2.3 billion (+19.4% YoY), supported by a stronger recovery in profitability in Mexico and Central America.

Broken down by region in 2023... For Mexico’s operations, we consider the opening of 90 stores, particularly 31 new stores in the Domino's Pizza format and 42 Starbucks. By division, we forecast the following revenue growth: 10.8% YoY in Casual Dining, 10.4% in Coffee Shops, 9.6% YoY in Fast Food and -1.1% in Fast Casual. Based on the above, we expect total revenues to register a 6.0% YoY variation.

The company's 4-year strategic plan includes various lines of action ranging from human capital development to measures aimed to promoting profitability and ESG objectives. Investment plans include maintaining a rate of ~120 new Starbucks stores per year between 2022 and 2026, as well as expanding its market share in Spain. As for Domino's, it plans to open ~75 new stores, deployed in Mexico (40%), South America (30%), and Europe (30%). Finally, with respect to environmental, social, and corporate governance (ESG) criteria, Alsea is working on building units with "Green Standards", incorporating clean energy, reducing water consumption by 35%, reducing gas emissions by 25%, auditing suppliers, and having 40% of women in executive positions.

Assuming a conservative stance, as we anticipate a year of considerable challenges for the company's growth and profitability, taking into account the outlook for economic slowdown and possible continuity on cost pressures during the first half of the year, particularly in Europe. To calculate the theoretical value of Alsea's shares, we used a discounted cash flow (DCF) valuation model, obtaining a PT of MXN 53.00 for the company's shares. At that level, Alsea would trade at 5.6x 2023E FV/EBITDA (vs. 5.3x currently), slightly below the year-average at 5.7x, as well as below the average of restaurant peers of 8.5x and franchisees of 16.4x (global average of 12.4x), remembering that we consider a scenario of economic adversity.

In our DCF model we used a WACC of 9.9%, which was calculated with a Beta of 0.9, Risk Free Rate of 9.7% (Mexican 10-year bond estimate) and market premium of 6.0%. The residual value was calculated using an FV/EBITDA output multiple of 5.3x, like the current one. In our view, we consider that risks and challenges are already embedded in multiple levels, representing an upside potential of 38.7%, therefore, our recommendation is to BUY. However, given the long-term high interest rate environment, a further revaluation would be limited for the time being, although some recovery cannot be dismissed. 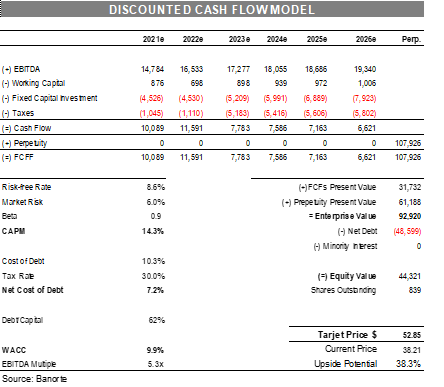 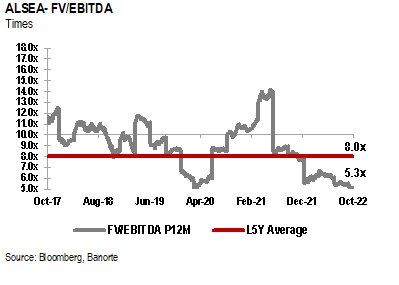 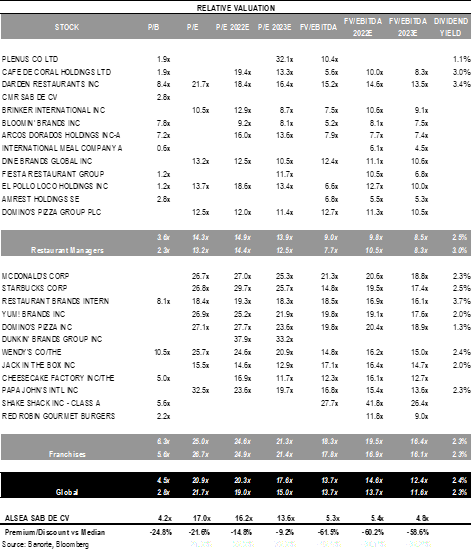