Strict operating expenses control and pricing strategies, alongside a strong demand, supported quarter's figures. Arca reached a 16.6% YoY top-line growth, in line with our expectations, mainly driven by: (1) strong volumes in Mexico which registered a +5.1% YoY increase (with July breaking a new record high of sales per unit case) and price transfers above inflation of +10.7% YoY; and (2) South America’s volumes which hiked +6.4% YoY, supported by all-categories growth, mainly in personal water and non-carbonated beverages. While, in the US, volume decelerated -0.9% YoY. As a result, EBITDA advanced 16.1% YoY, maintaining a stable margin at 19.2%. In particular, Mexico's profitability fell 110 bps due to higher PET costs. However, this impact was partially offset by a 70bps margin expansion in the US and 40bps in South America, as a result of operating expenses efficiencies. Finally, net income rose 25.1% YoY, supported by operating income, despite a higher foreign exchange loss due to the peso’s appreciation.

We favored the efficiencies implemented, rating Arca as defensive, given the challenging scenario of higher interest rates. The company continues with strict cost and shrinkage control measures, in addition to an outstanding financial strength of 0.4x ND/EBITDA. The valuation remains attractive, with the results, FV/EBITDA multiple decreased from 8.7x to 8.3x, our recommendation is to BUY.

We consider Arca Continental (Ac) to be a well-positioned company to face current challenges.

Ac has positioned itself favorably among leading companies in the beverage sector, being defensive, in our opinion, in the current context. It stands out for its attractive dividend payments and solid financial structure, opening the possibility of exploring merger and acquisition opportunities. In addition, the company continues to seek new business lines to adapt to new and diversified needs of its current and potential customers, as well as to leverage its current logistics platforms, which we believe are key catalysts for business expansion.

While we anticipate a mild recession for 2023, Arca will be resilient in the complex scenario, mainly due to aggressive pricing strategies ahead of inflation in all regions, especially in Mexico and the US, where they expect to be ~3.0% above CPI by early next year. Incorporating the figures, our long-term outlook for the firm is positive mainly due to its positioning in the US, alongside its favorable operating efficiencies and hedging strategies, making it a standout in the sector. Although, the price rebound of some raw materials such as PET -in conjunction with oil- and sugar, could pose challenges for the bottler profitability this year, we believe that top-line growth, alongside strict expense control, will help mitigate production costs. Based on the above, the company expects to generate OpEx efficiencies for this year of MXN 700 million or 2.0% of EBITDA, while for 2023 we estimate a margin recovery due to a more favorable cost environment.

The consumer is resilient. The beverage industry maintains a favorable pricing strategy, especially in Mexico (main region which contributes 51% to Ac's LTM EBITDA), where we have observed that, despite passing on prices above inflation to consumers, demand remains resilient. This year, we observed strong volumes growing ~5.0% YoY mainly due to favorable weather conditions in the north of Mexico in addition to the recently seen droughts, this same trend could continue in the mid-term derived from climate change, which could consequently support revenues; making us optimistic. However, for year-end on the US we foresee a slowdown in consumption, considering a greater demand sensitivity to higher prices compared to Mexico, and mainly explained by the hike on gasoline prices, where customers have decreased their occasional purchases at convenience stores located at gas stations. In the other geographies, we continue to see revenue growth driven by the same price strategy, increases in-line or above inflation, as well as an easy comparison base, since last year there were still mobility restrictions due to COVID-19. Incorporating the above mentioned, the company so far has outperformed its 2022 consolidated revenue guidance (6%-8% YoY). In that sense, we anticipate a revenue growth of 14.6% YoY for this 2022.

In terms of COGS, high raw material prices have affected the company's profitability. This year alone, the average price of crude oil Brent, (~20% of costs), which over the last 5 years has had a correlation of 0.86 with PET bottle price, has increased by 93% YoY. However, efficient hedging strategies have mitigated raw material pressures to some extent. The company hedged this year 50% of its aluminum needs in the US, 25% of fructose in Mexico, and 95% of sugar in Peru; all of them approximately ~20% below the spot price, which translated into an average cost savings of around MXN 1 million (~2.6% of EBITDA). Given the above, we forecast consolidated EBITDA growth of 14.2% YoY by year-end 2022, with the respective margin standing at 19.2%, representing a 10bps pressure vs. 2021.

At bottom line, we expect net income to increase 29.5% YoY to MXN 15.9 billion, mainly as a result of operating income and an increased participation in unconsolidated subsidiaries, which include PIASA, PetStar, and Beta San Miguel.

As for 2023, in our baseline scenario, we expect inflation to remain elevated -both for the producer and the consumer-, although it will gradually moderate over next year. In Mexico, we estimate Ac to increase its prices by 7.4% YoY, representing 200bps above our estimated inflation of 5.4% at year-end 2023.

Meanwhile, in terms of volumes, we anticipate increases of 3.8% YoY, supported by: (1) full-reopening of schools, recalling that, AC's revenues come 62% from corner stores, 15% from convenience stores (Oxxo format), and 8% from big-retail (2) the company's geographic position in the north of Mexico, supported by better prospects in terms of growth by state; (3) cyclical weather factors that favor consumption during droughts; and (4) its returnable bottle strategy, which offers an efficient price/packaging architecture that allows consumers to buy at a price that best suits them.

While for the US, we foresee consumption to slow down due to lower economic dynamism and lower consumer confidence given the possible mild recession, implying a slippage in the on-premise channel (restaurants, bars, movie theaters, etc.). With this, we expect a volume growth of 1.2% YoY for 2023, slightly above our GDP estimate at 0.8%. But we expect the company to continue growing by price, where we foresee a 420bps increase above our inflation forecast at 3.4%; besides revenues should be favored by a stronger dollar, recalling that the company's dollarized sales are equivalent to ~36% LTM.

In the other regions, we anticipate volumes increases slightly above the estimated GDPs, as well as effective pricing strategies in line with inflation. As a result, by 2023 we anticipate consolidated revenues to rise by 9.8% YoY.

Under the aforementioned context and in expectation of effective hedging strategies for 2023 as the ones observed in 2022, we anticipate a better outlook for gross margin, estimating a 40bps expansion to 44.7%, also boosting EBITDA. In that sense, we forecast a 12.5% YoY EBITDA advance, with a 50bps increase in the respective margin to 19.7%.

As for net income, we anticipate a 41.9% YoY increase to MXN 22.6 billion, given a significant decrease in the comprehensive cost of financing (-36.1% YoY), due to a lower net interest payment (-24.2% YoY), and an expected foreign exchange gain, which would contrast with 2022 losses, due to a higher dollar appreciation, MXN 22.00 by year-end 2023. Finally, we estimate that the company will exercise a CapEx of MXN 11.3 billion (-5.0% YoY), being in line with the company's guidance and allocated to production lines, coolers, returnable packaging, machinery and equipment, digital strategy, and delivery fleet.

Broken down by region 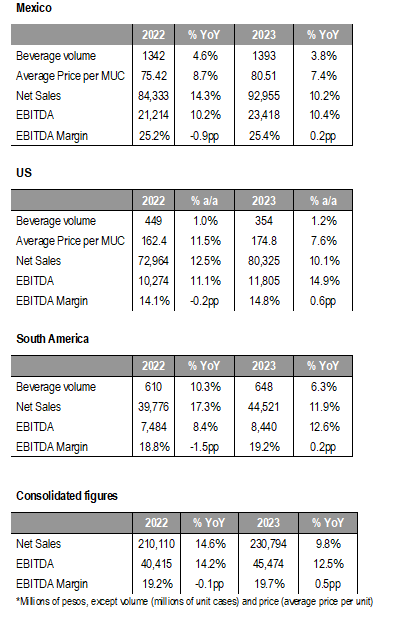 The main catalysts for the company's organic growth that we consider favorable for coming years are the following: (1) expanding its multi-category portfolio, with new products such as Costa Café and alcoholic beverages; (2) capitalizing on its analytical tools, with Yomp, collecting data from market participants and selling this information to other companies such as P&G, coupled with the agreement it made with KO, which now owns 50% of the platform with the possibility of further-leveraging the strategy. Similarly, we expect its app, AC digital, to support volume growth in the mid-term, as it is fully focused on the traditional channel and currently represents ~20% of Mexico’s total volume with 525k registered customers representing 60% of total customers; and (3) developing its logistic strategy, using spare capacity in its trucks and warehouses to distribute a wider range of brands.

In addition to the possibility of continuing to grow inorganically in the US Its solid financial position (0.4x ND/EBITDA LTM) opens the opportunity of realizing strategic acquisitions at lower multiples than expected, given current low-valuation levels. We believe this could represent a positive catalyst going forward, in addition to having a strong digital strategy in the region. My Coke app accounts for ~80% of US volume, so we expect the same trend to continue as it expands its presence in the country with the goal of continuing to open new growth channels.

In the absence of mergers and acquisitions, the company has returned 90% of net income to shareholders over the last two years. It is worth noting that we are expecting a payment of MXN 2.50 per share before year-end, in order to be at a payout ratio similar to previous years. This last payment would represent a return of ~1.6% on the current price. For 2023, we calculate a dividend payout of at least 45% of projected net income (being historically what the company has paid). With this, we estimate a dividend distribution of MXN 4.10 per share in 2023, representing a yield of ~2.6% on the current price.

We set a 2023 PT of MXN 179.00, with a recommendation to BUY. To calculate the theoretical value of AC shares, we use a discounted cash flow (DCF) valuation model, obtaining a target price per share of MXN 179.00. This price would represent a FV/EBITDA 2023E multiple of 7.9x, slightly below the current one at 8.3x. This, due to the fact that we do not expect a multiple revaluation given the higher interest rates scenario. While this multiple is above the average of The Coca-Cola system peers at 7.1x (see relative valuation table), in our view, is justified by a favorable geographic position and steady profitability improvements, while remaining well-below the company's historical L3Y average of 10.0x.

The assumptions used in the model were a discount rate (WACC) of 12.3%, assuming a cost of debt of 6.5% and a cost of capital (CAPM) of 13.9%. Broken down, for the CAPM, we used a risk-free rate of 9.7% (end of the period 2023E of the 10-year Mexican bond), a beta of 0.7, and a market risk premium of 6.0%. For the terminal value, we assume an FV/EBITDA multiple of 7.9x, slightly below the current one, and limiting significant revaluations under the restrictive scenario. Our target price offers an interesting upside potential of 19.1% (including a dividend yield of 4.2%), therefore our recommendation is to BUY. 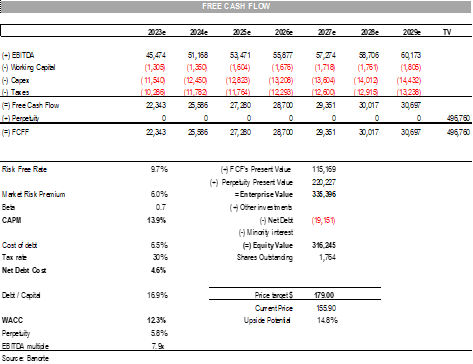 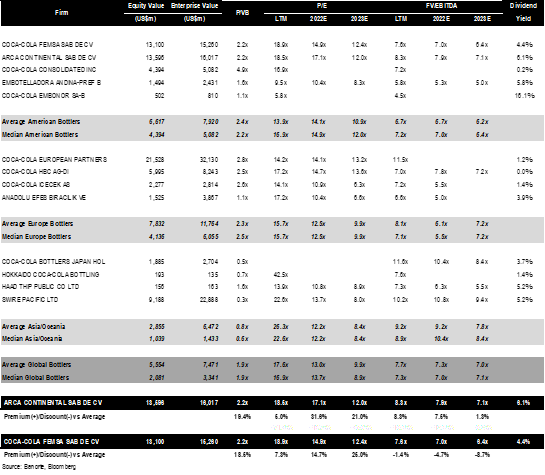