Prospects deteriorate given the complex environment

Strong impact on Mining due to inflationary environment and lower production. GMexico reported below our expectations and the market’s, with annual sales drop of 18.2% and with EBITDA sliding by 41.2%, as well as a margin contraction of 17.9pp to 44.4%. Minning (AMC) showed the greatest weakness, registering a decrease in copper production of 12.2% y/y and in sales volumes of 16.2% y/y, given the blockade of Cuajone complex in Peru, lower ore grades and a market-to-market adjustments to open sales.  While metal prices were mixed, copper prices fell only 2.0% y/y.  However, net cash cost rose 28.1% y/y due to the higher costs given the inflationary environment and lower production, impacting profitability by 20.8pp to 42.9%. Meanwhile, GMXT's figures were affected by a decline in volumes. In Infrastructure, although EBITDA grew 8.4% y/y profitability also decreased. Despite the above, financial strength (ND/EBITDA of 0.4x), led to a dividend decree of MXN 1.0 per share (vs. MXN 1.5 previously), payable on August 29 (annualized dividend yield of ~5%). The outlook is deteriorating, resulting from challenges which include high inflation and a lower global economic dynamism, which we believe will affect copper demand, and metal prices, as well as the company’s profitability in the coming quarters. In that sense, we modify our estimates to the downward and note that in the short-term share price volatility will continue.

The outlook for 2022 has deteriorated compared to the beginning of the year, mainly due to the expectation of a lower global economic dynamism, because of restrictive monetary policies from central bankers to combat the increasing levels of inflation, which have even raised recession fears. In that sense, we believe that copper demand would be affected. This becomes more relevant after China’s GDP data, being the main copper consumer, reflected a slower growth impacted by COVID-19 confinement measures, leading to downward adjustments in the indicator for this year (3.3% 2022e by the International Monetary Fund).

Although in the long run, the strengthening trends around a more-technological society and a greater boom in renewable energy projects will led to greater consumption of the metal, in the short-term economic challenges will keep pressuring copper prices, and even more, considering the International Copper Study Group (ICSG) estimate of a 5.1% increase in world production this year, according to its forecast report published on May 3, 2022.

As a result of external factors that have impacted the Mining division’s production and higher costs due to the inflationary environment, as well as a decrease in the copper price, where we now project an average price of $4.22 per pound (vs. $4.51e previously), -0.6% vs.  2021, in line with the Bloomberg consensus, we adjusted downward our estimates for the Mining division. On the other hand, GMXT should also show lower than expected growth given the current challenges, although it will be focusing on increasing profitability, supported by operation-efficient investments. Finally, Infrastructure would continue to recover benefited by the higher Energy revenues, the increase in Highways’ volumes and fares, and the continuous operation of the 6 Perforadora platforms.

Detailing our projections by division, in AMC (Mining), we expect an EBITDA of $5.4 billion (-28.1%), given the production decrease of ⁓9.0% due to the Cuajone’s operation suspension, which affected the 1H22 and minor ore grades, as well as a lower copper price of $4.22 per pound (-0.6%), considering the decrease in economic dynamism. This, alongside higher costs due to high inflation, will affect profitability. In Transport, we estimate for GMXT revenues of $2.6 billion (+4.5%) and an EBITDA of $1.2 billion (+4.0%) and thus moderating the growth expectation already observed in the 2Q22, where we expect higher average prices per ton to be partially offset by a less transported volume. Thus, we forecast a slightly EBITDA margin reversion of 0.2pp, standing at 44.4%. For Infrastructure, we anticipate an EBITDA of $2.5billion (+9. 3% y/y), showing a continuous recovery.

It will continue with investments to keep growing.  While the company noted that its investment commitment for the year is $2.2 billion, we believe it will take longer to execute that amount, although it will remain focused on achieving more operations efficiencies and maintaining future growth.

A competitive advantage of GMexico is that it has a healthy financial balance sheet and our expectation for 2022, despite the estimate’s adjustment, is that it will continue with a Net Debt to EBITDA ratio standing at 0.5x (vs. 0. 3x in 2021).  This will allow it to continue retributing shareholders, so we estimate that for the accumulated year the company will pay a dividend of MXN 4.50 per share. For 2H22 we expect an amount of MXN 2.00 per share, representing an annualized dividend yield of ⁓5% over current prices.

We use the sum-of-the-parts valuation method to reflect the value of each of GMexico's subsidiaries. It should be noted that there has been a fall in the sector’s multiple due to the higher interest rates environment, and particularly in mining, given the already-mentioned challenges.

For GMXT, the Bloomberg's consensus PT of $39.94, represents a 2022e FV/EBITDA multiple of 8.4x vs. 11.4x sector’s median, which we used in the valuation.  In the Infrastructure division, we assume a multiple of 8.0x, in line with the sector’s average sample. Finally, we value GMexico’s 2.9% stake in GAP, using the expected market value for 2022 according to our area’s estimates.

In this way, we obtained a target price for GMexico of MXN 86.00 per share. This price represents a 2022e FV/EBITDA multiple of 5.6x, below the 1-year average of 5.8x and above the 4.6x of peer companies’ average according to Bloomberg’s consensus, which is justified by the firm’s strong operations and leadership position, solid balance sheet, higher copper reserves, and lower cash cost on global basis. It should be noted that we maintain a holding discount of 20%.

The yield offered by our price target is 16.8% which considers a dividend rate of 2.9% (with 2 remaining payments of MXN 1.0 each during the year). Despite the current attractive valuation of 4.3x, environment challenges including persistent inflationary pressures, higher interest rates, and lower global economic growth, will continue to generate volatility in the stock price, so we lower our recommendation to HOLD. 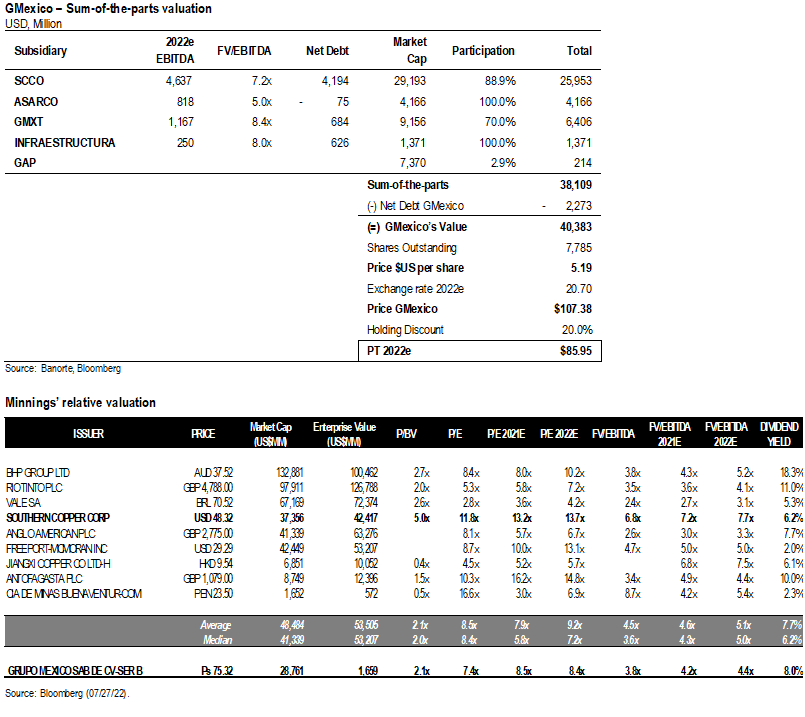