A guidance that limits accelerated recovery

The results will continue to put pressure on the stock price. Volaris’ figures showed growth in sales, but a gr-than-estimated margin contraction. Available Seat Miles (ASMs) increased 19.0% y/y and total demand, measured in Revenue Passenger Miles (RPMs), climbed 17.6% y/y, bringing the load factor to 85.6% (-1.0pp). Thus, an annual growth in total passengers of 20.3%, together with a higher average fare (+2.8%), more than offset the 6.1% decrease in ancillary revenues per passenger, which led to a total revenue advance of 20.3% y/y. Otherwise, operating expense per available seat mile (CASM) rose 34.6% due to the higher fuel costs (+106.5% y/y per gallon), resulting in an EBITDAR slump of 54.2% y/y to $107 million, with a margin of 15.5% (-25.3pp). It’s worth noting that the airline continued with cost control, recording a lower CASM excluding fuel (-0.7%). Incorporating the figures, the FV/EBITDAR multiple increased from 4.5x to 5.5x. The guidance update confirmed the solid demand expectation, but with higher profitability pressures, now expecting an EBITDAR to be in its lower twenties for 2022 (vs. previous high twenties margin). This will continue to impact the stock in the short term if there is no light of recovery, although we believe the longer-term outlook remains positive.

Solid revenue increases would be offset by higher fuel costs. After incorporating the 2Q22 figures, we updated our Volaris’ estimates, alluding to a solid demand performance, which clearly has had a better performance than the 1H22 forecast, therefore we anticipate a higher passenger traffic, with a better fare environment. This is also supported by the airline expected growth for the rest of the year. Although we foresee less economic dynamism going forward, we believe that demand will show defensive behavior and continue to advance in 2H22. Nevertheless, despite savings and cost control initiatives, the solid increases in fuel costs would result in a 2022 profitability contraction.

It should be noted that, in the longer term, we continue to recall that the company has favorable prospects, also supported by the low-cost business model and being one of the most benefited of the sector’s recovery, therefore reaffirming its leadership position.

In this way, our estimates assume that Volaris will end up 2022 with 115 aircrafts (vs. 101 in 2021), with an expected passenger traffic increase of 27.2%, boosted by the VFR (Visiting Friends and Relatives) segment, which would continue to show the best performance.  Meanwhile, we expect Available Seat Miles (ASMs) growth of 24.4% (vs. 23% to 25% airline expectation) and Revenues Passengers Miles (RPMs) climb of 25.4%, hence the load factor would remain at elevated levels, standing at 85.4% (-0.3pp y/y). 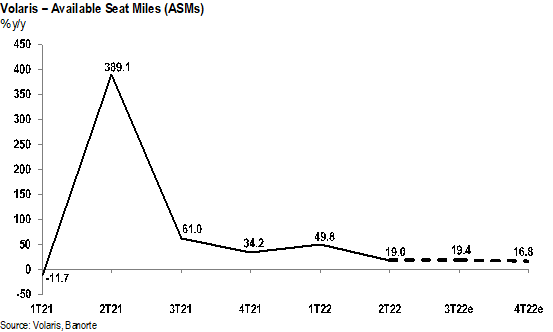 As we previously mentioned, the solid demand has favored a better fare environment, which we expect to continue in the 2H22, although to a lesser extent, considering a more normalized base, and the company's strategy to encourage greater demand. In that way, we estimate that during the year, the average fare will show a 7% increase, while the ancillary revenue per passenger will continue with a positive trend, increasing by 1.0%, considering the difficult comparative basis. Given the above, we anticipate a total revenue growth of 32.4% to $2.9 billion (+8% vs. previous estimate). Thus, we forecast total revenue per ASM (TRASM) to raise by 7% y/y.

We expect an EBITDAR drop of 30.5% (-21% vs. previous estimate) to $628 million, with a respective margin of 21.6% (vs. 29.6%e previous).  This is because, despite the higher revenues and the savings strategy, the increase in the major cost, which is fuel (42% of the total LTM.), would lead to operating expense per available seat mile (CASM) to hike by 25.7% y/y. It should be noted that, the CASM, excluding fuel would only advance by 4.1%. Volaris continues to stand out for having one of the lowest costs structures in the industry globally, which positions it better when fuel pressures ease.

Our expectation foresees a sequential improvement in Volaris margins as fuel prices soften, which is precisely what is expected going forward. Though, Aeropuertos y Servicios Auxiliares (ASA) is the fuel supllier to Volaris and there may be outlook differences, for illustration purposes, the following graph of US jet fuel prices alludes to lower price pressures, after peaking in June, according to the US energy agency’s (Energy Information Administration) monthly report for July. 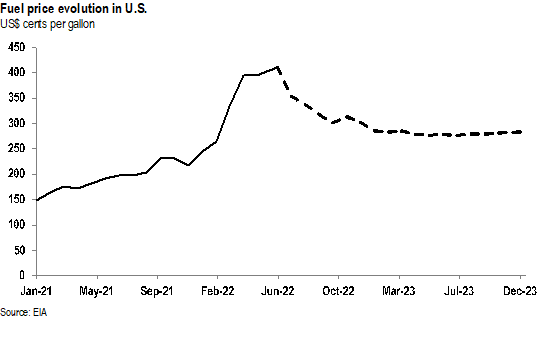 In line with the above, at net level, the airline would register a $74 million loss, which compares unfavorably with the 2021 profit ($106 million), given the operating performance and recalling that last year a notable recovery was recorded.

The company will remain financially strong despite the environment. We believe Volaris will continue with a healthy financial position, closing 2022 with an Adjusted Net Debt/EBITDAR of 4.7x vs. 3.9x in 2Q22 and 3.2x in 2021, levels which we expect to return by 2023 (3.3x).

Risks. Regarding our estimates, we shall be alert to some relevant factors. Within the main ones we mention: (1) The evolution of the pandemic due to new virus strains; (2) the oil prices behavior (which have shown high volatility), and their impact on jet fuel costs;  (3) the expectation of slower economic dynamism and growing recession fears in the US, which could affect passenger demand performance; and (4) the aviation safety rating in Mexico, recalling that it was downgraded to Category 2 in May 2021 by the Federal Aviation Administration (FAA),  and it is important that the return to Category 1 is not prolonged for much longer so that there are no limitations to the potential growth in passengers.

We use a multiples valuation methodology in our valuation. It is worth noting, that the current multiples and 2022e show some distortion due to the impact that jet fuel costs have on airlines earnings, while 2023 multiples should already show more normalized levels.

We reiterate the expectation of lower jet fuel pressures going forward, and therefore, margins progressing sequentially, as well as interesting growth prospects for 2023. However, we believe the higher interest rates environment due to persistent inflationary pressures would limit an accelerated recovery in valuation. Thus, assuming a 2023e FV/EBITDAR target multiple; in our opinion, conservative, of 5.0x, below the current of 5.5x, and the 2023e industry average of 6.0x, our PT is MXN 27.00 per share, which equates to a potential return of 25.8% vs. the current price. It should be noted that Volaris shows a better operating performance vs. its peers and has a solid sector position (Mexico’s leader).

Given the sharp downward adjustment of more than 50% in the share price over the past 12 months, from our point of view, Volaris represents an interesting investment opportunity, considering the timely and flexible capacity management strategy, and its low-cost business model that allows it to incentivize passenger demand through attractive fares, and thus stands out in terms of profitability. Again, we mention that the airline will be one of the main beneficiaries of the industry’s favorable dynamics, and with this, it will continue to strengthen its position as a leader in the airline industry. Though we recommend Buy, we do not rule the possibility that volatility in the stock will continue as long as the jet fuel costs are not reduced, so we suggest caution to take positions in the company given the challenges in the environment. 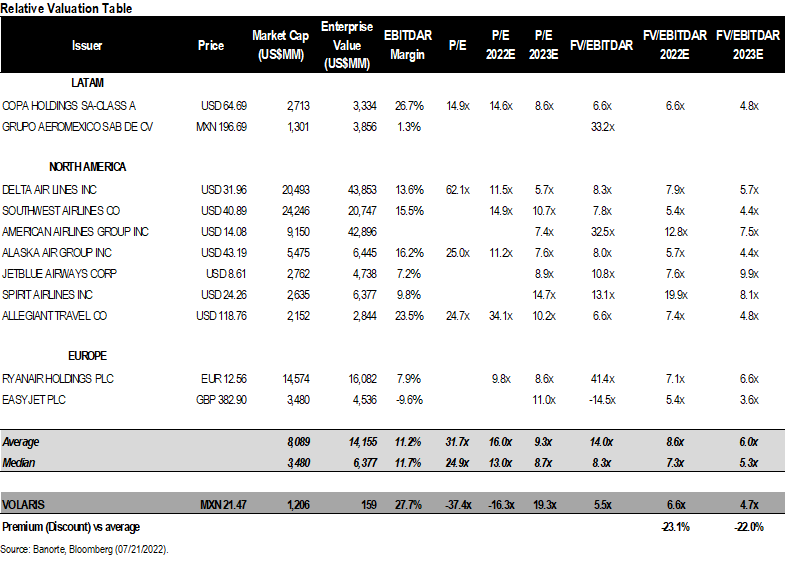 Two aspects to consider when calculating the airline sector multiples are: (1) EBITDAR equals to EBITDA plus flight equipment lease costs; and (2) leases are considered liabilities and most of them are on-balance sheet; however, there is a smaller number of leases that are off. The latter is multiplied by a factor of 7 to be included in the numerator of the FV/EBITDAR multiple, which is common industry practice.