Access Bank reported positive numbers for Q2 21, evident by the 71% yoy growth in net attributable profit to NGN34bn, ahead of our NGN26bn estimate. Interestingly, the banking group recorded the largest increase in net interest income among our coverage banks (97% yoy vs 24% expected), with its NIM (measured over total assets) expanding 1.6ppts to 4.4%. Management alluded this performance to high yields on its swap book with the CBN, increased lending activity during the quarter and an expanded book of investment securities benefitting from the improved market yields. Non-interest income, however, fell below our expectations (down 26% yoy vs +6% expected). This was the result of large fair value losses on fixed income securities and derivatives, outweighing the strong growth in fee income (up 59% yoy). Aside from revenues, the group's operating costs grew 17% due to increased activity in the recently acquired businesses in Kenya, Mozambique, South Africa and Zambia. This was still better than our expectation of 21% growth.

Loan impairment charges were worse than expected, growing to NGN12bn from a reversal position of NGN440mn in Q2 20. The group made significantly lower recoveries during the quarter (down 70% yoy), while some of the increased impairment charges were on structured trade finance loans granted to agro-processing companies by its UK subsidiary. The group's profits were heavily supported by lower taxes, which dropped 61% yoy. In summary, profitability metrics were positive, as Access Bank's ROE and ROA grew 5.3ppts and 0.4ppts yoy, to 17.6% and 1.4%, respectively. The group also declared an interim dividend of NGN0.3/share, a 20% increase from H1 20. 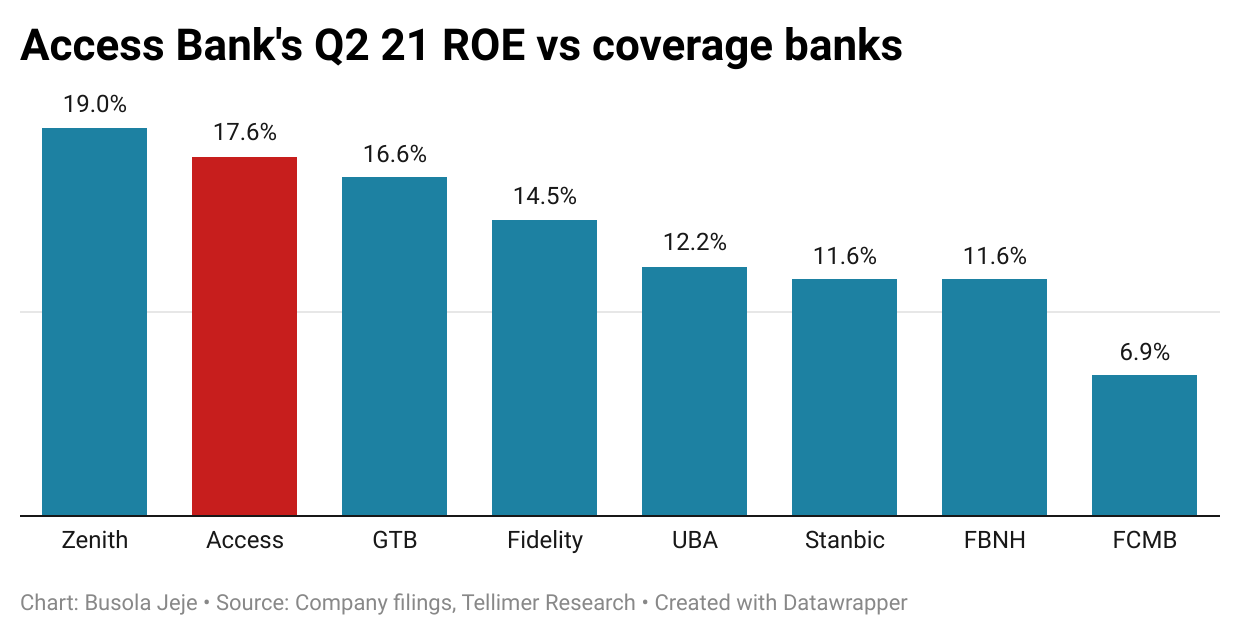 Access Bank remains a Buy, with a 12-month TP of NGN12

Our Buy recommendation on Access Bank remains, with a 12-month target price of NGN12, equating to an ETR of 36% at its current price. As we have highlighted previously, the group's retail banking drive and growing agency banking network is positive for fee income. Also, its expansion strategy beyond Nigeria, as well as its holdco plans, create more avenues for earnings diversification, de-concentration of operating risk and cross-selling opportunities, although it is expected to become more visible in the mid-to-long term.

Digital banking drive: Access Bank now has 75,231 agents, from 59,000 agents in FY 20. This puts it in second position in the industry by number of agents, with First Bank of Nigeria retaining the top position at 117,000 agents. Transaction value from agency banking also grew 100% yoy to NGN5.6tn in H1 21, while transaction volumes grew 99% yoy to NGN207mn. The group also opened 1.3mn accounts under the agency banking initiative during the period, compared to 769,000 in H1 20. Asides agency banking, transaction value and volumes on its other digital channels improved, growing 52% and 28% yoy, respectively. There was a slowdown in value and volumes from POS and debit/credit cards. Interestingly, USSD was the fastest growing in terms of volumes despite the recent changes in the pricing for USSD transactions, supporting our earlier position.

Loan growth: The group's gross loans were up 10% qoq in Q2 21, stronger than the 0.4% qoq growth recorded in Q1 21. For the entire H1 21, loans were majorly increased to Manufacturing (Industries), Conglomerates and Government, while Food Manufacturing declined the most. 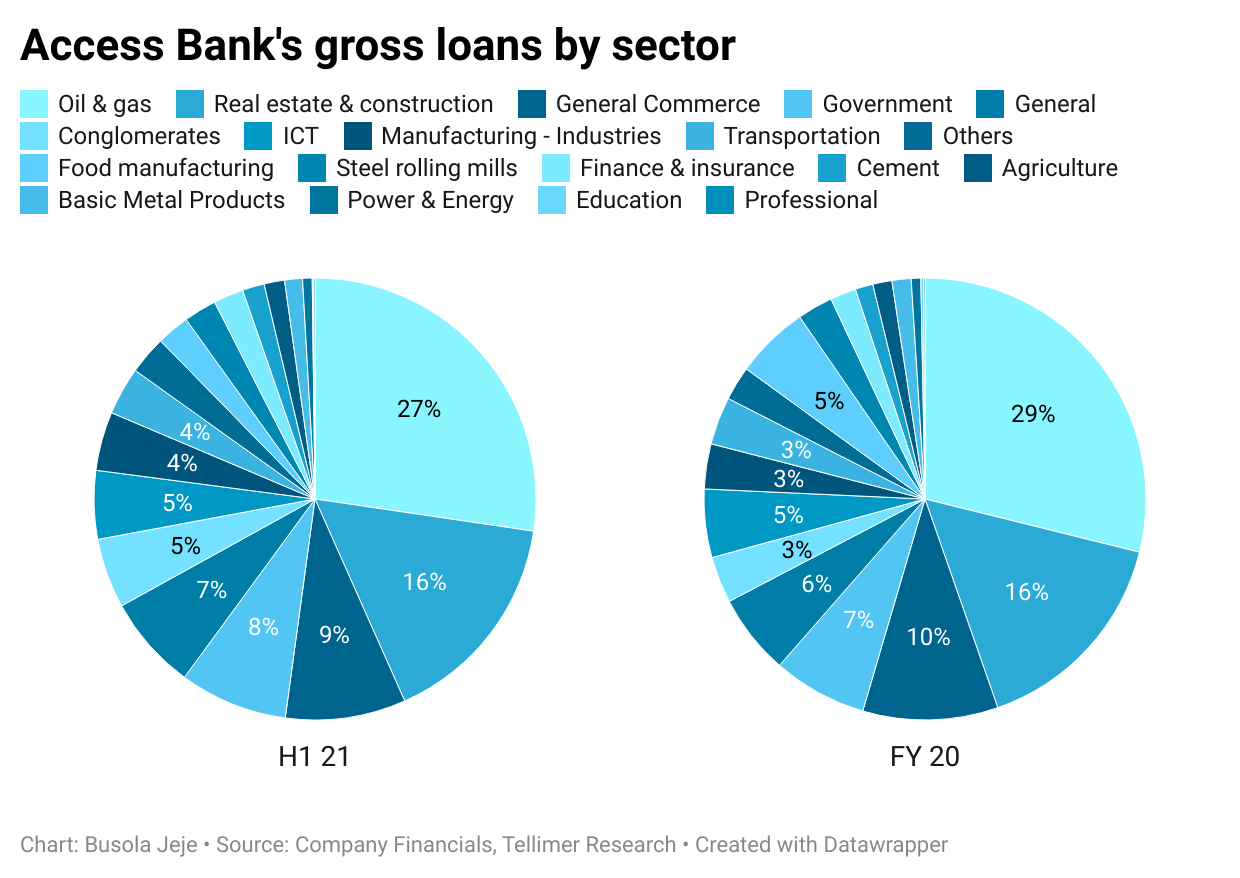 Asset Quality: On a qoq basis, the group's NPL ratio increased from 4.0% to 4.3%, albeit still below the CBN's prudential guideline of 5%. On a ytd basis, there was a surge in NPL ratios in the Downstream sector, General Commerce, Transportation and Real estate. Management noted that some of the obligors in these sectors where inherited from the Diamond Bank acquisition, and had issues pre-Covid. The increase in General Commerce was as a result of the negative impact of naira devaluation on the borrowers (mostly trading companies). The group also has a coverage of 106% on the sector's stage 3 loans. 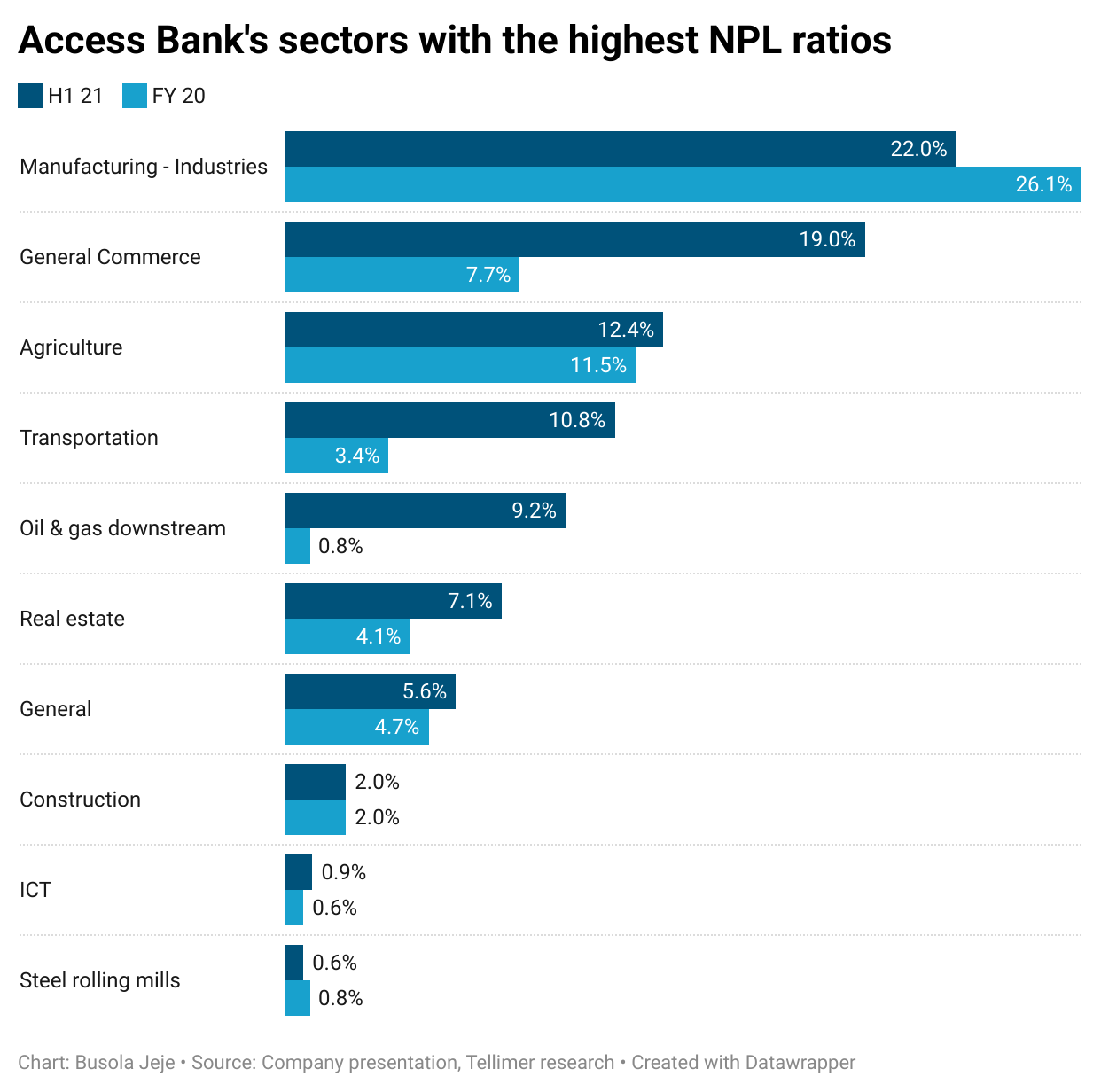 Subsidiaries performance: For H1 21, its Europe and 'rest of Africa' operations contributed 39% to the group's total PBT, compared to 34% in H1 20. Although, Access Bank UK and Ghana continue to be top contributors, accounting for 86% (85% in H1 20) of the total profits from subsidiaries. During the period, there were increased contributions from UK (up 111% yoy), Zambia (PBT up 30% yoy), Gambia (up 283% yoy) and Congo (up 4% yoy), as well as new contributions from Mozambique (NGN710mn) and Kenya (NGN696mn). However, contributions declined from Ghana (down 35% yoy), Rwanda (down 58% yoy), Sierra Leone (down 44% yoy), while South Africa was loss making (-NGN1bn). Over the next three years, management is looking to increase contribution to total revenue from subsidiaries to 35% to 40%, from 21% currently. 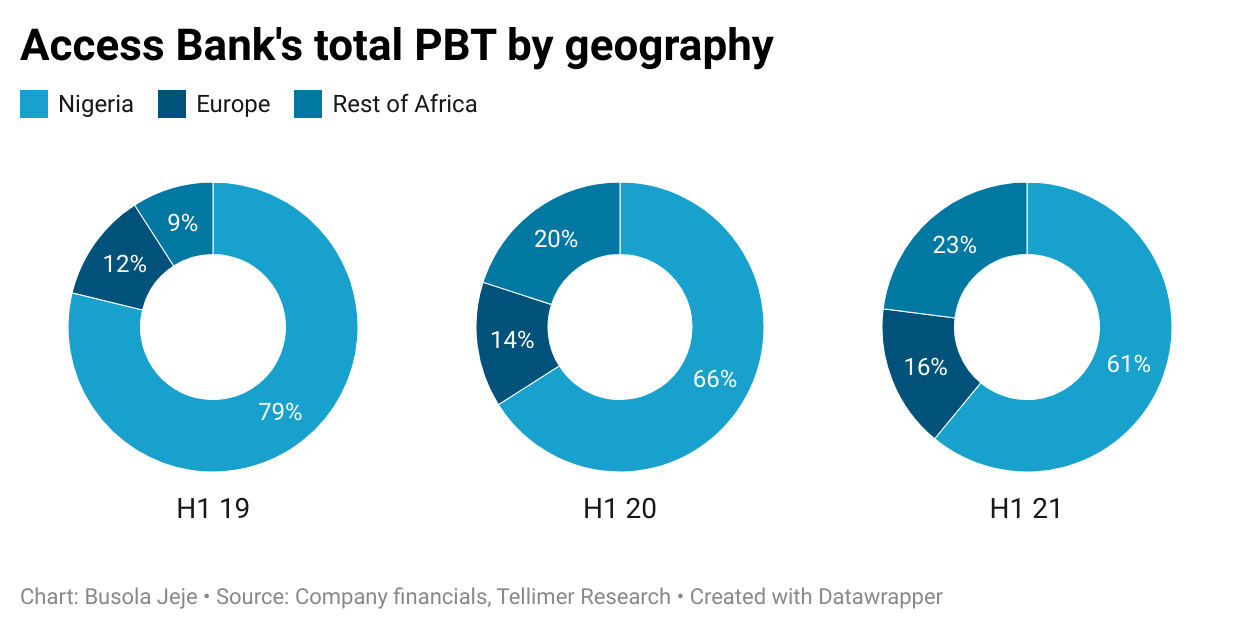 Holdco restructuring: The group's holdco structure is now expected to be in place in H2 22, later than the previous guidance of Q4 21. As previously stated, Access Bank's holdco structure will consist of four subsidiaries, which include the Access Bank group, a payments business, consumer lending and agency banking, as well as insurance brokerage. 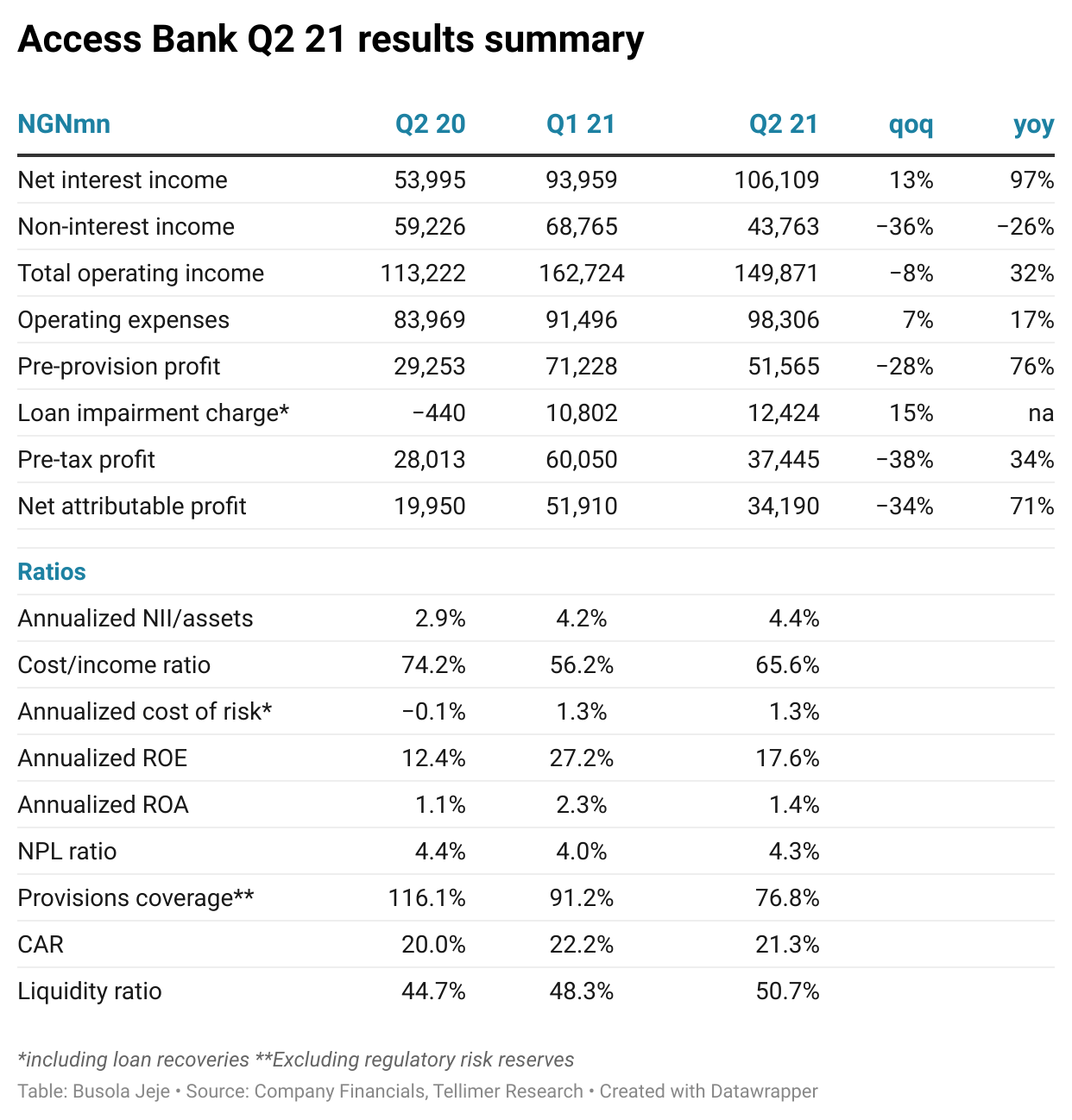