FBNH recently released its Q2 results, posting a 3% yoy increase in net attributable profit on its restated Q2 19 results. Net interest income was flat yoy as the lower gross interest income outweighed a 15% decrease in interest expense. Non-interest income, on the other hand, was up 15% yoy despite a NGN6.2bn loss in foreign currency, owing to a 25% increase in fee income on account of higher e-banking transaction volumes.

Overall, FBNH's Q2 results were a mixed bag as pre-provision profit was up 35% yoy owing to a 6% decrease in operating expenses while profit before tax was down 19% yoy, due to a 153% yoy spike in net impairment charges, and profit after tax was up 3% yoy due to a NGN 11.3bn gain from discontinued operations following the sale of the insurance business.

In light of the Q2 figures, we have updated our FY 20 earnings expectations for FBNH. We adjust our forecasts to reflect our expectation of lower net interest income, slightly lower operating expenses and higher provisions charges. These changes have resulted in a 4% decrease in our earnings forecast from the continuing business operations; however, on account of the sale of the insurance business, we expect after-tax profits to increase by 15% as compared with our previous forecasts.

On the back of this, we lower our TP to NGN10.7 (previously NGN11.5), but reiterate our Buy rating on the stock due to its strong retail banking franchise (which is driving lower funding costs), its improved operating efficiency and its continued resolution of legacy NPL issues. Our TP represents an ETR of 135% and the stock trades at a 2020f PE of 2.5x and PB of 0.3x.

FBNH recorded some improvement in its funding cost, which was down 0.9ppts to 1.78%, following a 15% decrease in interest expense as the Bank ramped up mobilisation of low-cost retail deposits (which accounted for 87% of total deposits as at end-Q2).

Fee income was up 25% yoy as the surge in electronic banking transaction volumes outweighed the lower fee charge on transactions.

The continued focus on cost efficiency despite the rising inflation saw operating expenses decrease by 6% yoy, mainly driven by a 49% reduction in AMCON charges and a 51% decrease in overhead lighting and power costs. This resulted in a 7.6ppts reduction in the bank’s cost/income ratio, which came in at 65.2% in Q2.

The bank continued to record asset quality improvements as its NPL ratio improved by 0.4ppts over the quarter to 8.8%, owing to improvements in legacy loans as well as active recoveries on loans previously written-off, which offset the devaluation impact on FCY loans.

FBNH's CAR improved to 16.5% following the injection of NGN25bn of Tier 1 capital into the bank following the completion of the sale of FBN 65% ownership in FBN Insurance Limited to Sanlam.

Loans tapered off during Q2 (down 3% qoq) as the bank rebalanced its loan portfolio, shed legacy problem loans and avoided exposure to vulnerable sectors within the quarter.

Surprisingly, trading income was down 13% yoy and 77% qoq, against our expectation that banks would gain from the devaluation given they had a net-positive FX position (cUS$400mn as at FY 19).

Impairment charges rose by 153% yoy to NGN20.9bn in Q2, with 66% of this increase a result of the translation impact of the bank’s foreign currency loans, which accounted for 56% of total loans as at end-FY 19. This led to a 3.9ppts qoq increase in provisions coverage to 43%, although this is well below peers, which average c100%. 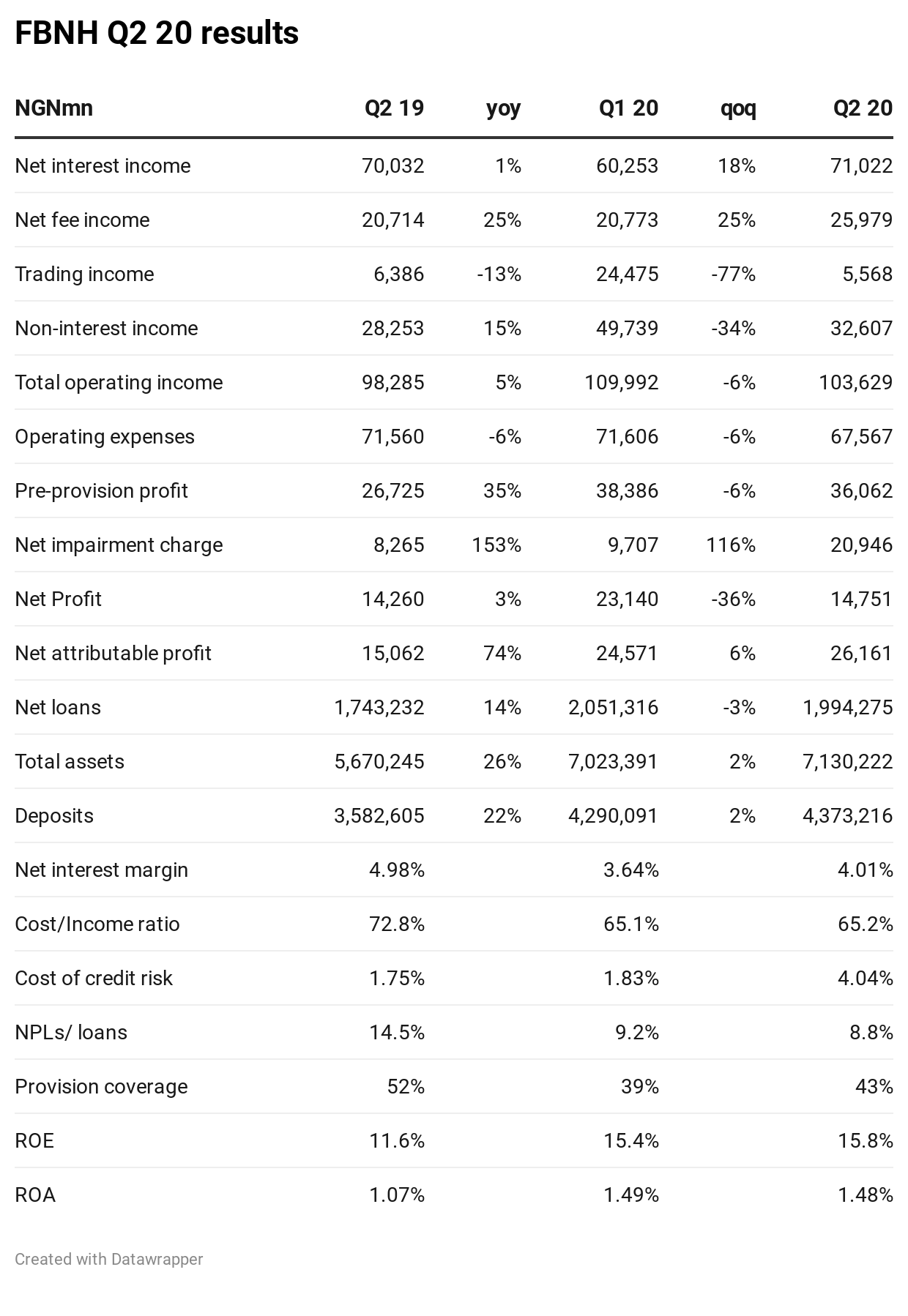 Going forward, based on the bank’s debt profile and FX position, we expect loan impairment charges to remain high in the coming quarters, even without any further currency devaluation. However, we anticipate a better FX management strategy to boost performance in H2 20. We also expect the bank to continue to offload its legacy loans over the coming quarters.