FBN Holdings: Q1 21 results are out, but that is not what everyone is talking about

The 29th of April 2021, will be remembered as a remarkable day in Nigeria’s banking sector. In one sweeping move, the Central Bank of Nigeria's Governor removed all the board members of Nigeria’s oldest bank and agency banking leader – First Bank of Nigeria – as well as the holding company, FBN Holdings. The key question is why did this happen? We highlight two major reasons.

First, the group did not provide information or secure approval from the CBN, prior to making recent public changes to management. This included the removal of the Managing Director/CEO of the commercial bank (Sola Adeduntan), before his tenure expiration in December 2021. The CBN Governor admitted he was tipped off about the decision to remove the Managing Director by a concerned board member, but made no headway in pleading with the chairman of the holding company (Oba Otudeko) as well as some other members of the board, to hold off. In addition to removing the board, the CBN announced a new interim board for both the bank and the holdco, reinstated Sola Adeduntan as the bank's CEO, and kept the positions of the GMD of the holding company and Deputy Managing Director of the commercial bank.

Second, the CBN noted the abysmal state of some insider loans (loans granted by the bank to directors/officers), that remained problematic and contributed significantly to the bank’s below-average asset quality (NPL at 7.9% vs our coverage average of 4.7%). Interestingly, the insider loan facilities have not been compliant with the terms set for restructuring for over three years, while First Bank has failed to give sufficient detail about the shares and collateral arrangements posted on these loans. From several reports gathered, and information made public concerning CBN’s letter to First Bank dated 26 April, we note that the insider loans in question were given to Honey Well Flour Mills (a listed company), whose founder and chairman also happens to be the chairman of FBN Holdings. 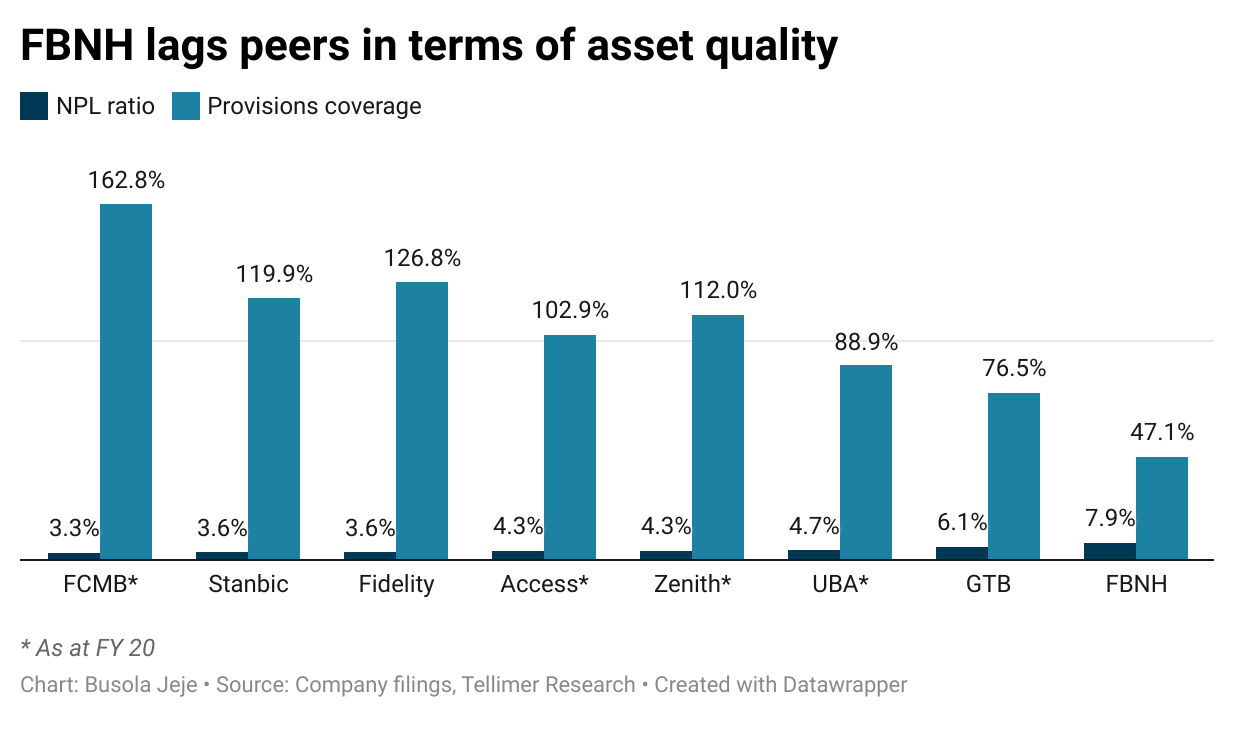 Furthermore, the bank did not divest its equity investments in non-permissible holdings in line with regulatory directives, which were reported to be Honey Well Flour Mills and Airtel Nigeria, also related entities to the chairman of the holding company.

Why is the MD’s removal so significant to the CBN? Revisiting the 2015/16 crisis

FBN has had it tough over recent years, beginning during Nigeria’s recession in 2015-16 caused by the crash in crude oil prices. This period also coincided with the start of the term of the now-reinstated CEO (Jan 2016), who had been an Executive Director at the bank for over a year. As the CBN noted, the problems at the bank that surfaced 2015 were attributed to bad credit decisions, significant and non-performing insider loans and poor corporate governance practices.

From our assessment, NPLs ballooned above 18% for each year between 2015 to 2018, with significant write-offs taken within those years, totaling above NGN500bn. The bank’s ability to grow its balance sheet dwindled, while capital ratios fell to a precarious level of 11% (considering the full impact of IFRS 9) within the period, below 15% regulatory guidance. Profitability also declined, as ROE fell from 17% in 2014, to a low of 2.4% in 2016. 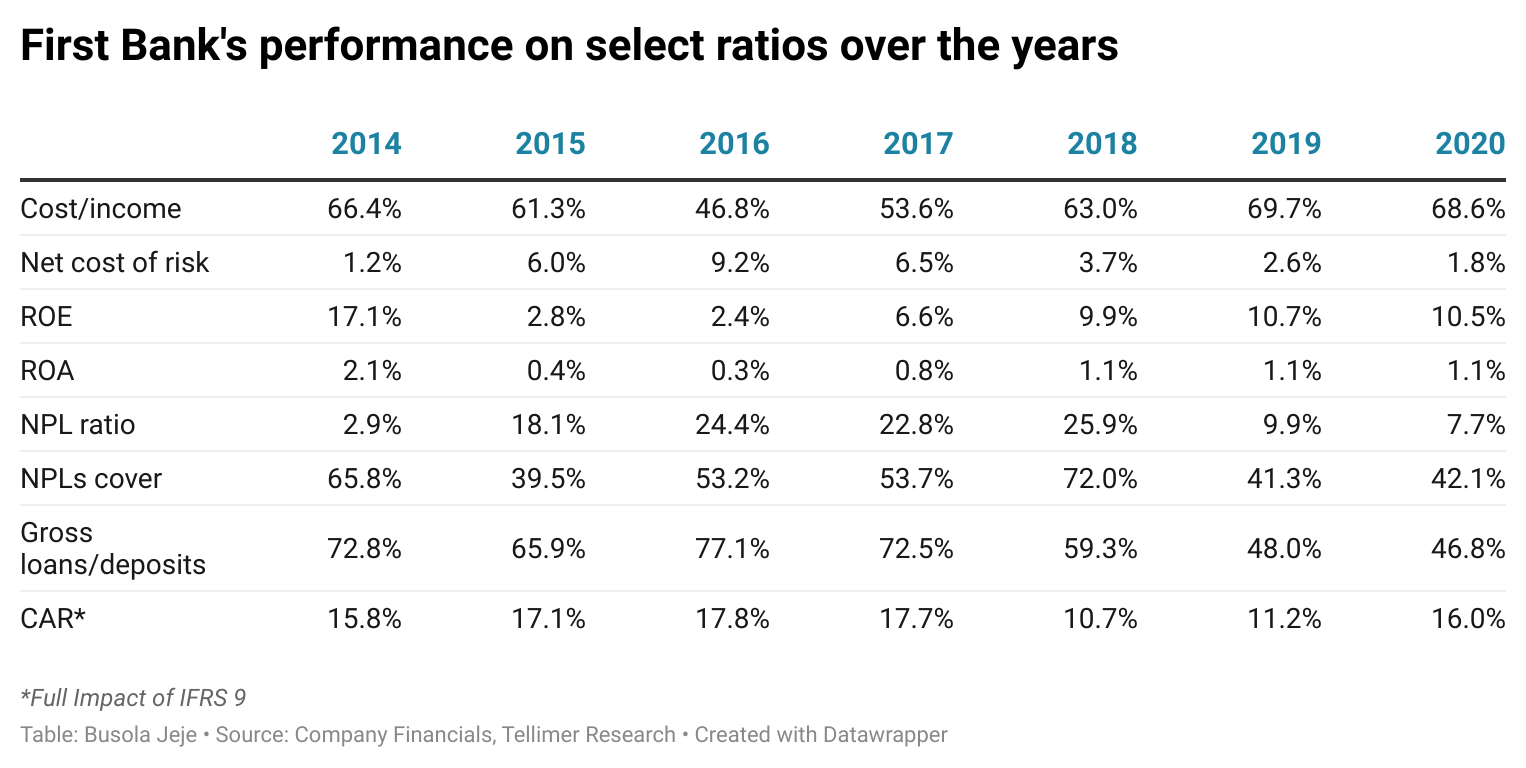 However, recent metrics show the bank has made significant progress in its efforts to clean up its balance sheet, improve profitability and capital ratios – while receiving regulatory forbearance from the CBN because of the bank’s systematic importance. As a result, the CBN indicated there was no concrete reason why the MD should be removed, given the positive strides that management had been making to improve the bank’s financial standing.

Our view on what the recent developments mean for the bank

We note that this is still an evolving incident, and the decision may challenged by the ousted directors. However, we attempt to make sense of the current information, and will issue follow-up reports as the situation unfolds. So far, the response from FBN Holdings has been constructive, acknowledging the new board structure and indicating its co-operation with the CBN’s recent declarations.

Interestingly, while we had expected the market reaction to be negative following the announcement, the stock closed flat on Friday (although it dropped 7% the previous day, before the CBN's announcement). Going forward, we note that the CBN’s intervention is positive for improved corporate governance – which as First Bank’s history has told us – is necessary and a source of long-term value add.

With the new board, we expect the issues surrounding insider loans and other related loans to be handled more effectively. A number of listed companies that have an affiliation with the ousted board, such as Honey Well Flour Mills, are unlikely to benefit from such easy access to credit from the bank going forward.

Also, the bank’s ongoing recovery efforts and balance sheet strengthening could even be further improved, because the CBN-created board and the management now have an aligned goal. However, salient risks remain in getting the new board up to speed on the bank’s large operations, although we expect the CBN to provide significant oversight.

Lastly, the CBN’s stance on First Bank sends a signal to the broader banking industry about the appropriate dealing of insider loans as well as evaluating their risk and loan management frameworks.

In terms of our valuation of the bank, we refrain on making any significant changes to our forecasts given the volatile situation and lack of clarity as to how it would impact the bank’s operating performance going forward. However, we will provide updates as the situation unfolds.

Concerning the Q1 21 unaudited results, the group recorded a 29% yoy decline in net attributable profit to NGN16bn, greater than our expectation for a 14% decline. The results showed interest income slowed significantly as well as an uptick in impairment charges, while fee income soared above our expectations. Despite the weak results and the ongoing board changes, we still find the following factors attractive: 1) the group’s growing digital and agency banking operations; 2) positive results from its asset clean-up strategy and efforts to increase coverage in FY 21; and 3) improved capital adequacy ratio (albeit still room for improvement). 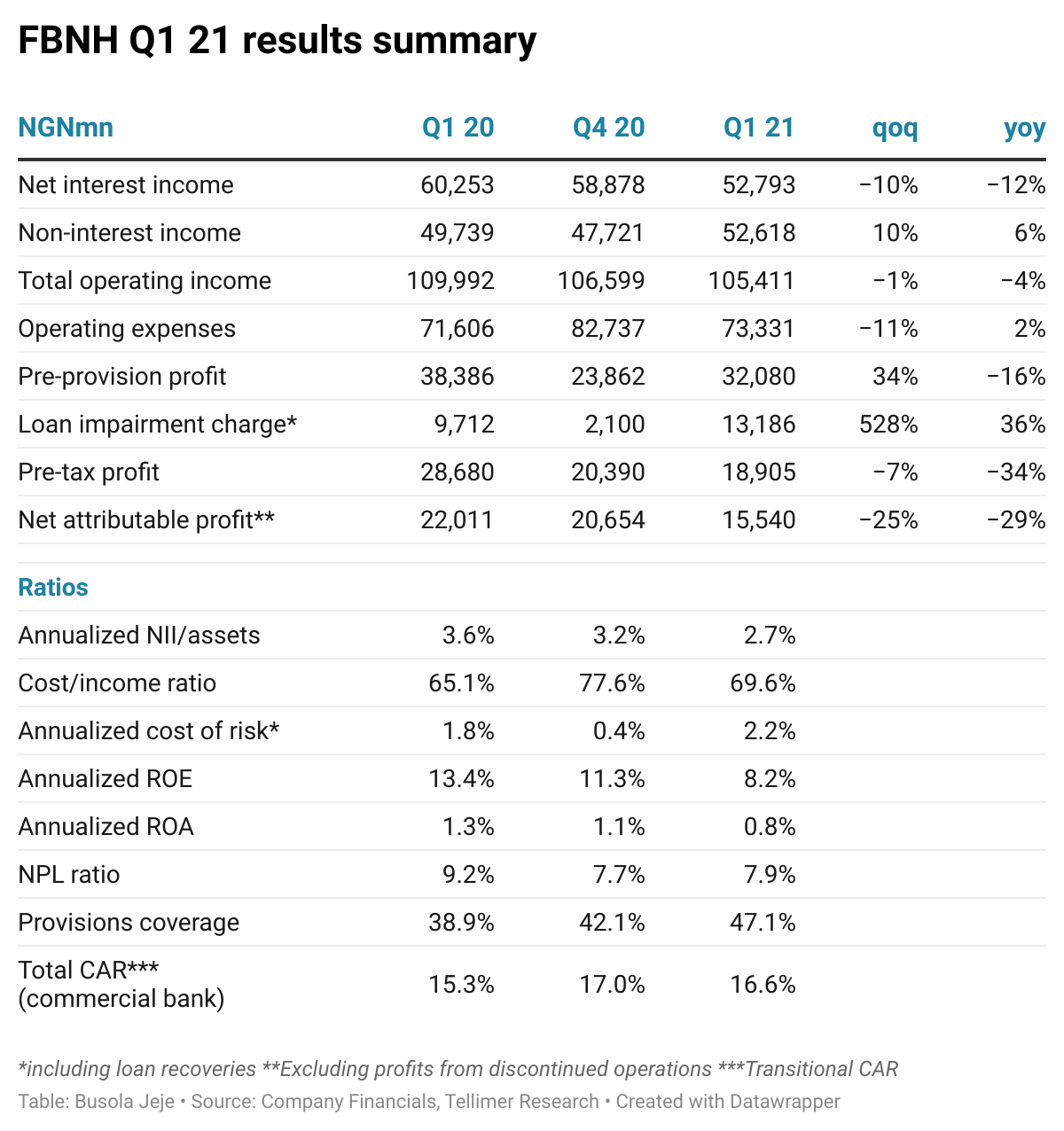