FCMB, one of the holding companies in our Nigeria banks coverage, recently published its Q1 21 results. The group's profitability declined, on the back of weaker net interest income, trading revenue and an uptick in operating costs. Asset quality remained relatively healthy, while capital ratios weakened during the period. The group continues to look for avenues to expand its non-banking subsidiaries via the acquisition of a pensions business expected this month, accelerate the adoption of its digital banking channels and grow its retail loan book. We have a Buy recommendation on FCMB, with a 12M TP of NGN3.6 and an implied ETR of 21%.

FCMB’s Q1 21 numbers showed a 25% yoy decline in net attributable profit, a poorer performance compared to our expectation for a profit drop of 12%. Among the drivers of underperformance was lower net interest income (16% below our forecast), as the group recorded a larger decline in yields on earning assets (mainly on its debt securities), compared to the decline in funding costs. Also, gains on trading and FX revaluation reoccurred, though at a significantly lower intensity than in Q1 20 (down 29% yoy) – a trend seen across most of the banks we cover. On the other hand, the group's fee income increased past our expectation (14% above), on larger contribution from digital banking and asset management.

The group's operating expenses grew at a slower pace than we expected, with regulatory costs being the major driver. However, given the weaker revenues during the period, operating efficiency declined, with cost/income at 79% vs 74% expected. Asset quality ratios remained healthy, with NPL ratio at 3.2% (now the lowest in our coverage), and robust provisions coverage of 165%.

We have a Buy recommendation on FCMB, 12M TP of NGN3.6

We maintain our 12M TP on FCMB at NGN3.6, translating to an expected total return of 21%. Key positives for the group are efforts to increase profit contribution from its Wealth Management segment (currently 14% of PBT), with the acquisition of AIICO Pension Managers – expected to be completed this month. The group's digital metrics are also positive, from its efforts in driving retail lending, digital transactions and accumulation of low-cost deposits. However, we note the company's capital adequacy ratio (16.5%) is below our coverage average of 20%. As a result, the group is expected to continue to retain most of its profits from the banking subsidiary, but at the expense of low payout levels to shareholders. We also expect a tier 2 capital raising exercise in the near term, to shore up capital levels. Interestingly, management noted that risk asset growth in FY 21 will be skewed towards the Retail segment, which carries a weighting of 75% in the computation of CAR vs 100%. FCMB trades at 3.0x FY 21f PE and 0.3x tangible PB, a discount to its Nigerians peers at 3.3 FY 21f PE and 0.5 tangible PB. 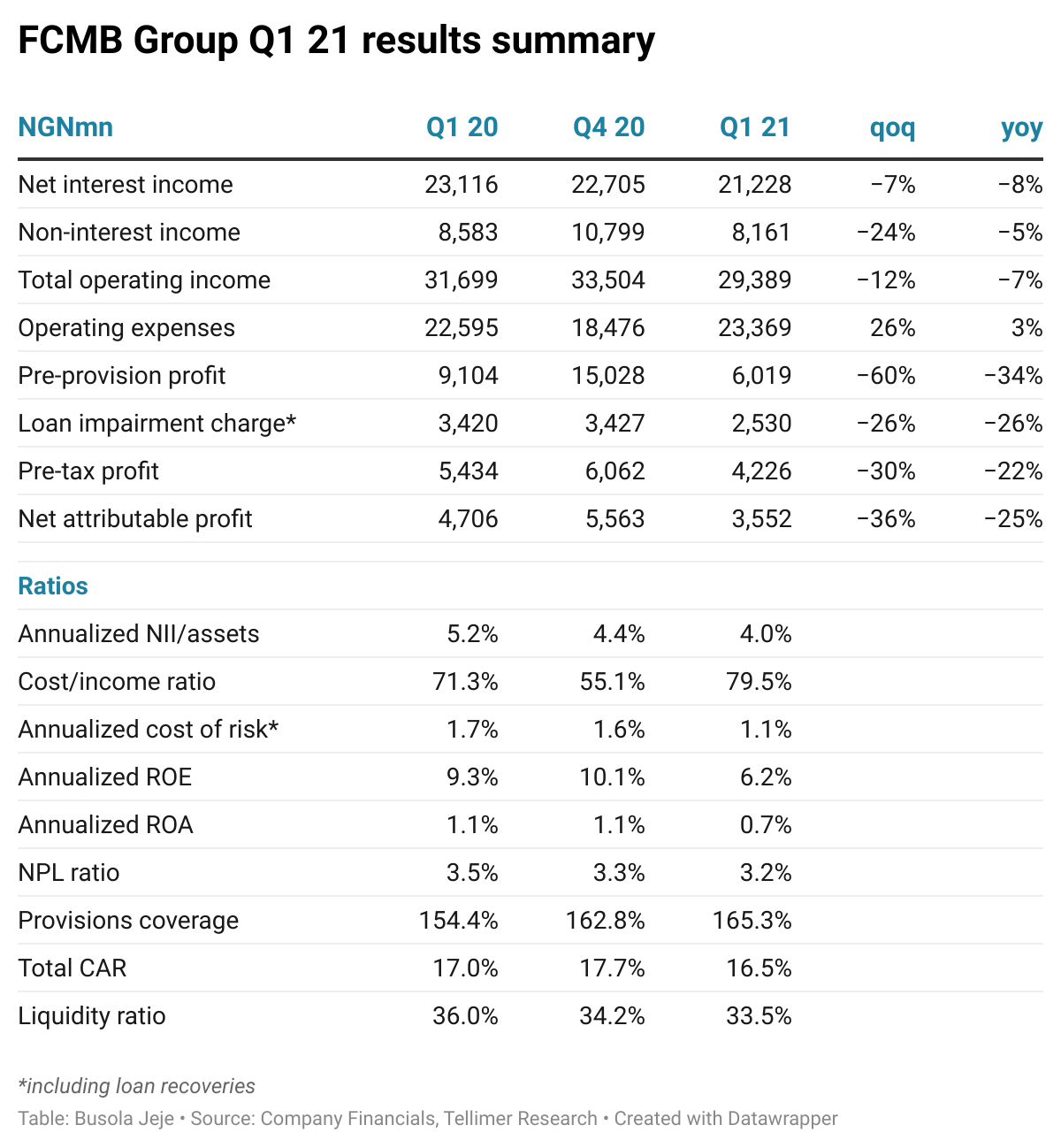 Other key takeaways from the management's call

Loan growth: Management guided to a loan growth of 10% to 14% in FY 21, also expecting a growth in deposits around the same range. Already, the group's loan book expanded by 8% qoq, directed to Manufacturing (+13% yoy), Oil and Gas (+5% yoy), as well as Consumer Credit/Retail (+7% yoy), while exposure to Agriculture declined (-3% yoy). For FY 21, Retail, Agriculture, Manufacturing as well as Commerce are focus sectors, with 50% of the increase in the loan book expected to come from the retail segment. 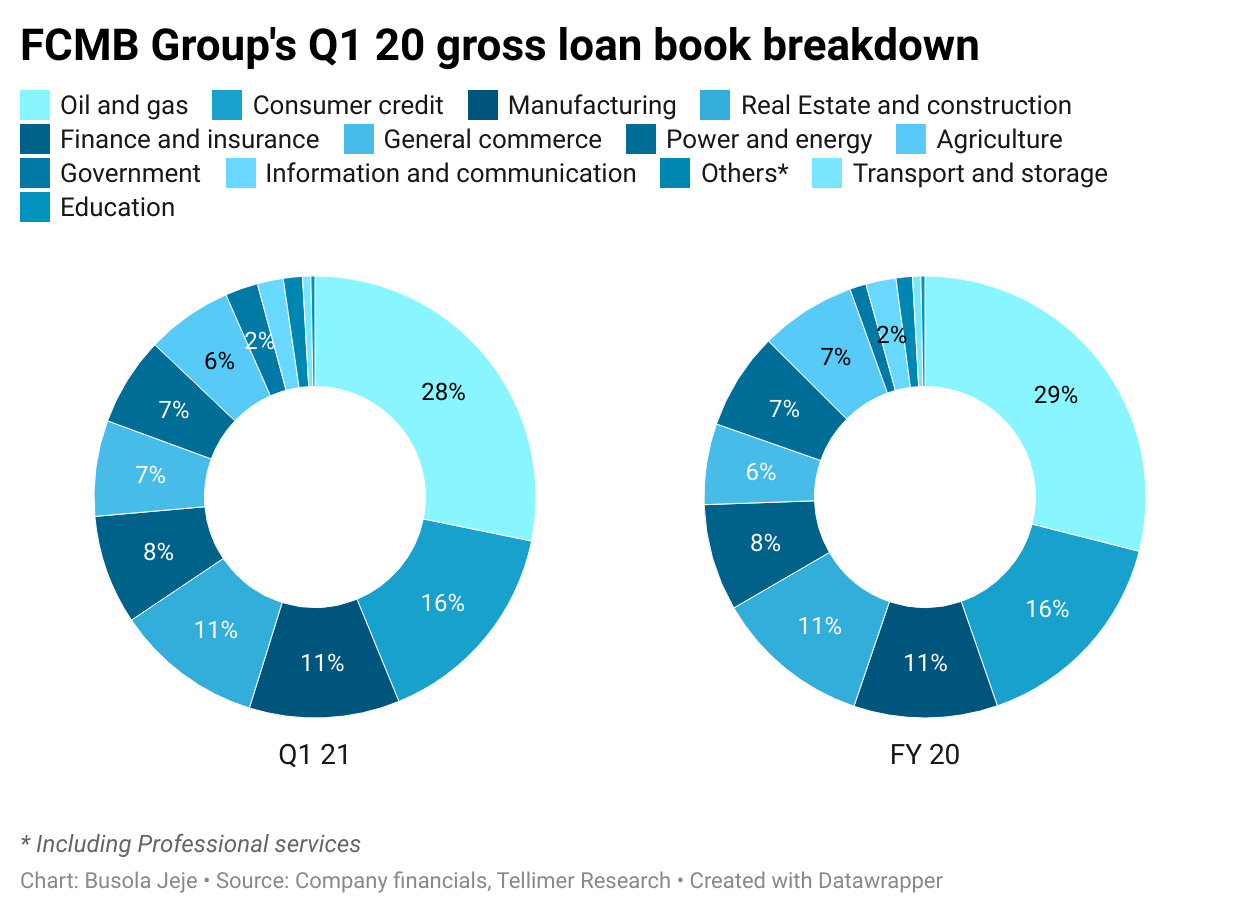 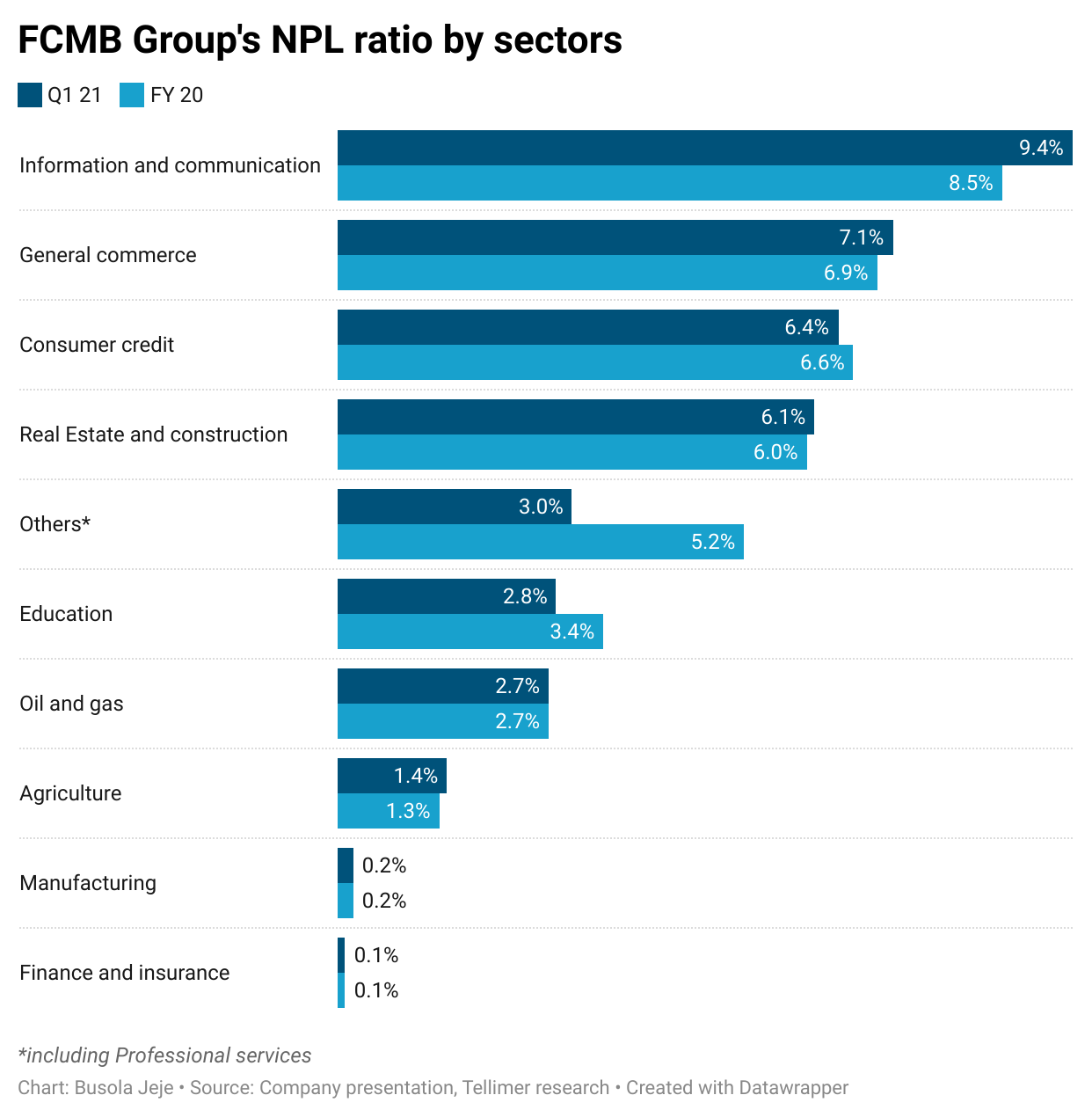