The outlook for 2023 remains highly uncertain, and investors are pricing in for a notable slowdown in global demand as major economies enter into recessions. The oil markets succumbed to this uncertainty yesterday as crude futures declined for their fourth straight session, which pushed benchmark front-month Brent futures back below $80 per barrel for the first time since January. WTI, meanwhile, has slipped back below $75 per barrel. Timespreads are also starting to widen further into contango, suggesting that near-term supply levels are ample. Brent’s prompt timespread is currently near 60 cents per barrel in contango, a significant change from the $4 per barrel in backwardation we saw just a month ago. However, it should be noted that the market remains exceptionally volatile, which could only worsen into the final sessions of the year as liquidity levels drop, especially after this week’s implementation of the EU’s restrictions. Our view remains that the outlook for oil over the next few months is bearish, with mean reversion to continue until we get to levels closer to fair value at between $65 and $75 per barrel.

Energy: Nigeria and Morocco are strengthening their ties through a gas pipeline that seeks to improve energy infrastructure in the region. Morocco’s National Office of Hydrocarbons and Mines (ONHYM) signed five new Memorandums of Understanding (MoU) with several countries yesterday, demonstrating its commitment to putting the Nigeria-Morocco gas pipeline into operation. Specifically, Morocco concluded agreements with Nigeria, Gambia, Guinea Bissau, Guinea, Sierra Leone, and Ghana. The 5,600-kilometer-long pipeline will span more than 11 African countries along the Atlantic coast, with the ambition of benefiting over 400 million people. Morocco will be home to 1,672 kilometres of the pipeline, transporting Nigerian gas to Europe through the North African country and several other African nations.

Botswana: According to a budget planning document provided to MPs, the government intends to spend BWP 64.1bn on various infrastructure projects over the next two financial years in an effort to reduce its dependence on mineral revenues. The Transitional National Development Plan will allocate BWP 26.8bn for new projects and BWP 37.3bn for continuing programs between now and 2025. Most of the funds are earmarked for projects in the areas of health and education, as well as the development of roads, water infrastructure, land servicing and digital connectivity. According to estimates, upgrading and implementing new infrastructure will result in economic growth of 4.1% in 2023, 4% in 2024, and 4.9% in 2025. While Botswana holds a broadly balanced budget, it will be necessary to borrow carefully to avoid crowding out private capital and higher debt interest payments.

Food supplies: Without the participation of major exporters, represented by Russia and Ukraine, the global grain crisis —which continues to jeopardize food security in many African countries — will be hard to resolve. The Food and Agriculture Organization of the United Nations has reported that there is already a severe grain shortage in more than 50 nations in North Africa, Western Asia, and Central Asia. This is due to the Grain Initiative, which the UN, the Russian Federation, Turkey, and Ukraine signed in July, has not made any headway. Russia has criticized the EU for the lack of progress, claiming that all the grain exported from Ukraine is delivered to the West instead of to nations in need.

South Africa: Stats SA published Q3’s GDP figures, which saw the economy expand by 1.6% q/q compared with -0.7% q/q contraction in Q2, reflecting a level of recovery from the spillover effects of the Russia war and supply-side disruptions such as the KZN floods. The reading beat an expansion of 0.4% q/q expected by the market, according to a Bloomberg survey. On a y/y basis, the economy grew by 4.1% compared to 0.2% in Q2. Eight industries, particularly agriculture, forestry, and fishing sectors and exports, underpinned the growth, likely due to favorable weather and global price conditions. However, headwinds remain, such as the Transnet strikes that will probably filter through to Q4 numbers and the never-ending power outages in the country. These factors may drag down domestic output, leading to a less rosy Q4 GDP print.

Kenya: The Central Bank of Kenya announced that it would reintroduce charges for transactions between mobile-money wallets and bank accounts. Recall that the fees were waived at the start of March 2020 as part of the emergency measures to facilitate the use of mobile money. The new charges have, however, been significantly lowered compared to those that were applied before the global pandemic. According to the CBK, the revised maximum charges for transfers from bank accounts to mobile money wallets will be reduced by, on average, up to 61%, while mobile money wallet-to-bank accounts, by, on average, up to 47%.

Egypt: The International Monetary Fund (IMF) will hold the much-anticipated meeting in Egypt on December 16 as the country awaits final approval for a $3bn loan deal. The restricted meeting will be crucial for Egypt as access to funding will be vital in helping shore up the nation’s economy as it grapples with the fallout from Russia’s invasion of Ukraine. A liquidity injection from the IMF will help clear existing trade backlogs caused by requests of importers seeking hard currency and regain momentum in the FX market.

While the recent pullback in the USD has provided some much-needed reprieve for many African currencies in recent weeks, the Zambian kwacha has come under considerable selling pressure since September. For context, the ZMW has depreciated by more than 12% against the USD since the lows recorded at the start of September to close yesterday’s session at 17.2250, its weakest level since early June. It is worth mentioning that the USD has lost more than 3% over the same period. 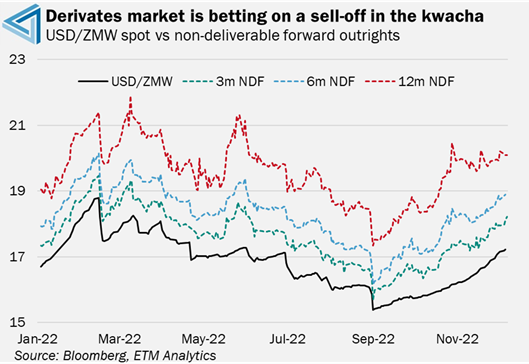 This suggests that domestic factors are driving the sell-off in the kwacha. One of the main headwinds for the ZMW has been the deterioration in Zambia’s balance of payments, with the current account dipping into a deficit for the first time since Q2 2018 in Q3 2022. According to data from the central bank, Zambia recorded a current account deficit of $-0.4bn in Q3 2022 vs a surplus of $0.2bn in Q2 2022. The central bank noted that the deterioration in the current account was driven by a  significant reduction in net merchandise exports as well as an expansion of deficits in the services and primary income accounts.

As highlighted by the central bank in its November 23 policy statement, demand pressures that emerged in September for the procurement of agricultural and petroleum products have intensified in the fourth quarter, adding to the pressure on the ZMW. While the ZMW is expected to remain under pressure in the final weeks of 2022, it is widely expected that the government will conclude its debt restructuring by Q1, which is expected to have a significant positive impact on the budget, market sentiments, and mitigate some of the pressure on the ZMW. That said, the derivatives market is pricing for further depreciation in the ZMW, with the 12-month non-deliverable forward outright currently trading north of 20.00, implying depreciation of some 16% over the next 12 months.

Ghana remained in the spotlight on Tuesday after headlines surfaced that local funds are pushing back on the government’s request that private pensions forfeit some interest payments on domestic bonds. Recall that the government launched its debt exchange on Monday, which replaces existing debt with four new local currency bonds that won't pay interest before 2024.

Private pension funds, which hold approximately 5.5% of domestic bonds, said that the deal isn't acceptable and that they want the government to discuss new terms. Specifically, the Chamber of Corporate Trustees said, “the proposal as put forth by the Minister of Finance is inferior to market expectation and will destroy the savings of Ghanaians and further undermine market confidence,” adding, “this is why we reject it outright.” 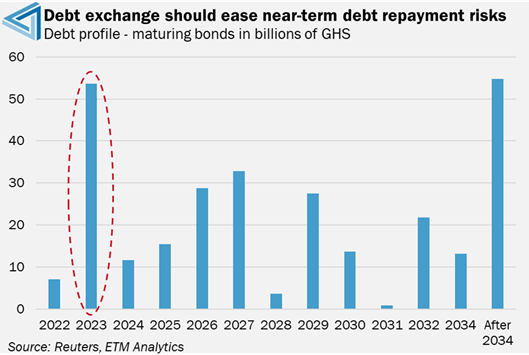 Creditors have until December 19 to exchange roughly $10.4bn of existing debt with the new bonds maturing in 2027, 2029, 2032 and 2037. The pushback on the debt exchange from local private pensions could derail the government’s plans to restructure its debt, which it hopes will reduce its debt burden and debt servicing costs.

Given the fact that the debt restructuring is a pre-requisite for a deal with the International Monetary Fund, it is imperative that the government comes to an agreement with private pensions. Note that representatives from the IMF are currently in Ghana to complete talks with government officials and hopes are that the government will secure a staff-level agreement before the end of the year on a 3-year program worth as much as $3bn.

The last of the African PMIs was released on Tuesday. The S&P Global report highlighted that business conditions in Ghana’s private sector continued to deteriorate markedly in November as significant currency weakness and surging inflation dampened demand. For context, Ghana’s headline PMI reading came in at 44.9 in November, well below the 50-point neutral mark. S&P Global said in the report that the latest increase in output prices was the sharpest since the survey began in January 2014. Respondents linked higher purchase costs to currency weakness and rising fuel prices. The passing on of higher input costs to customers led to a series-record increase in selling prices. 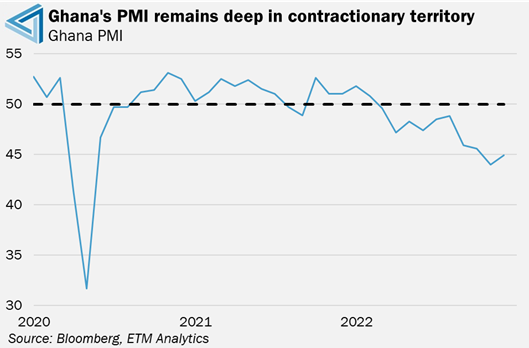 The Ghanaian cedi has been the worst-performing African currency this year, depreciating by more than 50% against the USD. The sharp depreciation in the ZMW has amplified price pressures. The import bill has surged on the back of the currency weakness. While risks to the outlook for the cedi are to the upside, there are signs of an easing in the bearish bias in the currency on optimism surrounding the debt exchange.

Severe price pressures, deteriorating economic conditions and financial pressures at clients' end led to a reduction in new business, according to the report. The hit to demand caused by strong price rises led to a steep decline in business activity, extending the current sequence of contraction to 11 months. Purchasing activity also decreased amid declining demand and higher prices for inputs. Looking ahead, concerns about the impact of currency weakness and inflationary pressures on the private sector meant that business sentiment remained lacklustre in November.