After initially dropping sharply on comments that the Fed was in the final stages of tightening, the USD recovered when Fed Chairman Powell added that rates would likely peak higher than first anticipated. Add to that the tight labour market as reflected by the JOLTS data and the private sector ADP payroll data, and the risk of wage inflation remains high. The Fed’s hike of 75bp might’ve been priced in, but the risk of many more hikes wasn’t. The USD regained its composure quickly, and equity markets slid onto the back foot once more. Risk aversion is up, and higher beta currencies will experience higher volatility. All eyes now turn to the BoE today for its rate decision and guidance and the US payroll data tomorrow as the final arbiter of how tight the labour market really is. Another strong payroll number will keep the USD well-supported.

Botswana: Afreximbank President Benedict Oramah yesterday said that African Export-Import Bank is in talks with Botswana for a $1.5bn economic support package. The president added that the funding would be targeted at rail infrastructure, agriculture, and light manufacturing. Discussions are at an early stage, and the details of the support will be provided in due course, according to Botswana’s Finance Minister. While Afreximbank has previously funded private-sector projects in Botswana, the proposal would be the first direct arrangement with the government.

Kenya: The Energy & Petroleum Regulatory Head has indicated that Kenya plans to invest $3.2bn in the power network in the medium-term. According to the Head, the funds are required to expand electricity transmission and distribution infrastructure. The network will expand by 6,218km in circuit length and 12,037 MVA in substation capacity under the medium-term plan. In the long-term, the agency sees an increase of 12,293km in circuit length of transmission lines and 18,496 MVA substation capacity at a total investment of $5.7bn.

Kenya: The Capital Markets Authority reported that the Kenyan bourse recorded foreign outflows of KES 7bn in Q3. The outflows were partly attributable to a search for yield in other jurisdictions according to the regulatory authority. The regulatory authority added that outflows are “a major risk to the Kenyan secondary market as market activity, which is largely driven by foreign investors, declines and compromises the sustainability of market intermediaries such as stockbrokers and investment banks.”

Morocco: Official data showed that remittances from Moroccans living abroad reached MAD 81bn ($7.3bn) at the end of September, representing an 11.6% y/y increase. The increase in remittances will be welcome for the Moroccan economy given that remittances, in addition to tourism, exports, and foreign investment, are an import source of foreign currency.

Uganda: Uganda’s Energy Minister has noted that East African countries may look to China for the $3bn needed to fund the pipelines. According to the minister, China is “always ready” to fund energy plans. The minister added that Uganda is working with countries like Tanzania to raise funds for the East Africa pipeline project and that the EU resolution objecting to the pipeline project was “unrealistic, unjust and inconsiderate.” Uganda is on track to start its first oil fields in 2025 and will announce two more exploration licenses next year. In September, the Minister of Finance said that the projects are estimated to earn Uganda at least $2.8bn annually once production starts in 2025. The anticipated earnings equate to 40% of projected domestic revenues in the year through June, and the oil revenue will be mainly invested in infrastructure development, bridging an annual deficit of $400bn. The revenue will also bolster foreign exchange inflows while the projects will create employment and support economic activity.

Zambia and Zimbabwe: The Zambezi River Authority, in a recent statement, said that water allocations for Zambia and Zimbabwe from Kariba will drop 11% next year as the dam’s levels fall, risking increased power outages for the two countries. Zambia’s Zesco Ltd. and Zimbabwe’s Zesa Ltd. will equally share 40bn cubic meters of water next year, down from 45bn cubic meters. Water levels at the reservoir are plunging toward record lows, threatening hydroelectricity production for Zambia and Zimbabwe. The dam had 9.3% of usable storage on November 1, compared with 31.59% a year ago. The levels are close to those of the 1995-96 season, the lowest recorded since the dam wall was completed in 1959.

Ethiopia: Representatives of the Ethiopian government and Tigray People’s Liberation Front have agreed to cease hostilities for the second time this year. The peace accord was signed in South Africa and raises hopes that an end to the two-year conflict may be in sight. Former Nigerian President Olusegun Obasanjo, the African Union’s chief representative for the Horn of Africa region, said that “this moment is not the end of this process, but the beginning of it. Implementation of the peace agreement signed today is critical to the success of the process.” The conflict has hampered efforts by Ethiopia’s government to improve relations with international financiers as it awaits an International Monetary Fund loan amid efforts to restructure its debt. 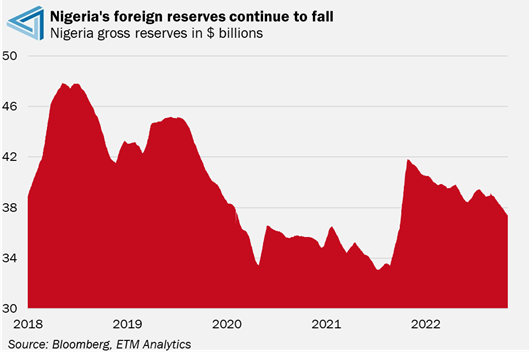 Declining foreign exchange reserves and inflows have magnified dollar shortages in Nigeria and seen the naira weaken both in the official and parallel markets. In the former,  the naira is down by over 4% YTD against the USD. In the parallel market, the naira has plunged to record low levels of around NGN 850 per dollar. It is worth highlighting that recent pressure on the naira has been exacerbated by the CBN announcement last week that it would redesign higher-value local currency notes. This has triggered a rush to purchase dollars.

Going forward, risks to Nigeria’s reserves remain tilted to the downside amid dwindling oil proceeds and significant demand pressure. This suggests the broader bearish bias on the naira will remain for the foreseeable future in the absence of currency reforms by the Nigerian government.

The Fed hiked rates by 75bp once again last night, matching expectations and taking the Federal Funds Target Rate to the 3.75% to 4.00% range. In the statement, the FOMC noted that ongoing increases in borrowing costs are anticipated, but this time added the qualifier that the committee will take into account the cumulative policy tightening already implemented and the lagged effect that this has on economic activity and inflation. This suggested that the tightening cycle is nearing its end phase. 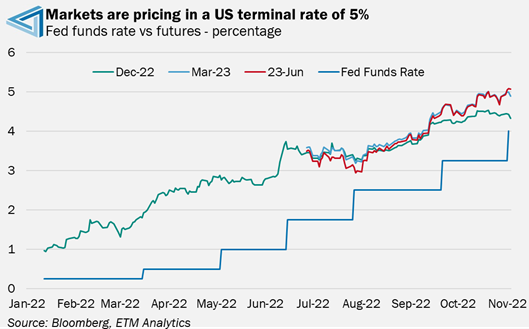 However, Fed Chair Powell took a relatively hawkish stance at his post-meeting press conference. Powell suggested that while the pace of rate hikes may slow from December onwards, the terminal rate is being assessed as higher than what was predicted even in September. This suggests that we could be in store for a prolonged period of policy tightening in order for the Fed to bring inflation under control, with no pause in sight just yet.

Overall, therefore, it was still a fairly hawkish FOMC meeting, with the suggestion that the pace of rate hikes could slow being offset by the possibility of rates rising to higher levels than previously expected. The market still has a terminal rate of around 5.00% priced in for now, with a 50bp increase expected in December.

What the slower pace of rate hikes does mean, however, is that the Fed could be more flexible. This opens the door to a quicker shift in policy if upcoming data show growing recession risks and if inflation slows faster than what is currently expected. Until we see signs of this, the USD is likely to remain supported and the bearish bias in bonds is likely to persist.

Ocean freight rates have peaked and have started to normalize as demand subsides and supply chain congestion eases. This will be a relief for policymakers and inflation doves, given the impact shipping costs have had on inflation over the past year. The cost of a 40-foot container has decreased by 70% in the last year from the highs seen during the Covid-19 pandemic. According to Maersk, the world's largest container shipping firm, global container demand is expected to contract between -2% and -4% in 2022, down from the previous projection of +1% to -1%. That said, relative to pre-pandemic levels, global freight rates remain elevated. 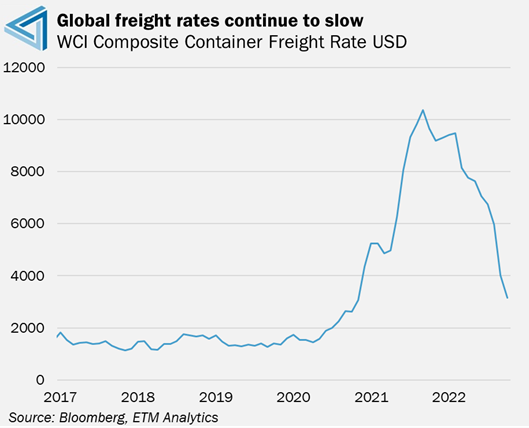 Although shipping costs and supply chain pressures remain elevated, it is encouraging to note that there has been a substantial improvement in both. The moderation in shipping costs and easing of supply chain issues against the backdrop of a deteriorating global growth outlook adds to the notion that global inflation is likely to slow in the months ahead. It is worth adding that we should see base effects begin to contribute to softer inflation from the end of Q1 2023.