Post-Covid monetary easing cycle is coming to an end

Recent central bank decisions suggest the post-Covid easing cycle has come to an end across many EM after the unprecedented monetary stimulus seen over the last year. While many could be on hold for a while, some are looking ahead to when tightening may begin. Rising food prices are cited by monetary authorities as among the reasons for action.

That said, we see smaller emerging and frontier markets with less policy space, larger weights of food prices in CPI baskets and stronger FX passthrough as among those that may have to move more quickly compared to their mainstream cousins. In bigger EM, ample slack may mitigate upward pressure on prices and central banks may want to bide their time to spur a recovery in domestic demand (and worry about inflation later).

Central banks around the world reacted quickly last year to the onset of the coronavirus pandemic by cutting interest rates aggressively (while fiscal policy tends to respond more with a lag). The average (unweighted) policy rate in Developed Markets fell by c75bps from February-May 2020 to 0.1%, according to our calculations based on BIS data, and edged slightly lower later in the year to stand at just 0.07%. 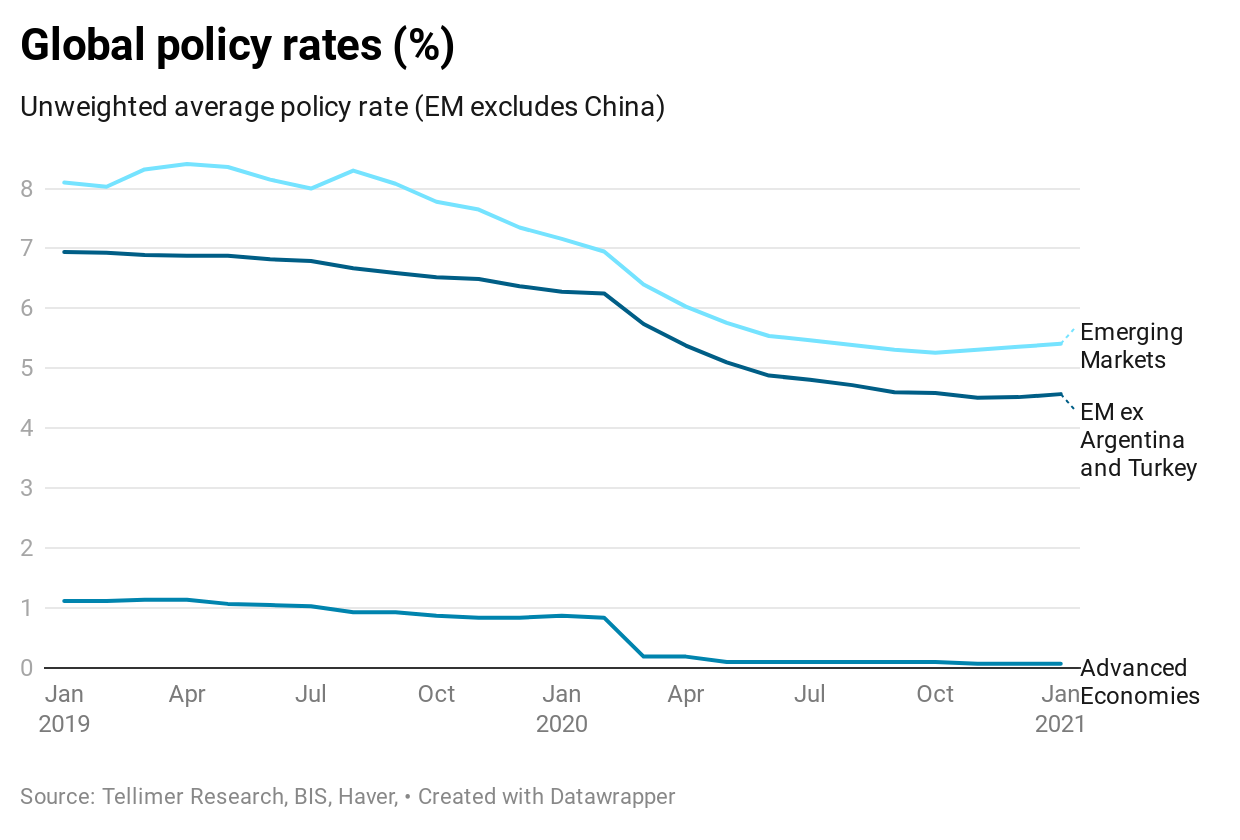 Meanwhile, the average (unweighted) policy rate across a broad range of EM (unweighted average across a broad sample of 55 countries taken from Haver, excluding China and those which are dollarised or with US$ pegs) fell by c120bps over the same period, according to our calculations, albeit from a higher level, and continued to fall through to the final quarter. The total decline from February to October was c170bps, with the average policy rate declining to a low of c5.3%, or 4.5% excluding Argentina and Turkey. And many AE, and even some EM, also implemented unconventional monetary policy (UMP), through QE for example, to further boost liquidity at or near the zero lower bound.

Rates have hit a bottom

However, despite a few exceptions, we have probably now reached the bottom of the EM rate cycle (bar another shock) as more central banks have remained on hold in recent months. According to Bloomberg's rates monitor, covering over 60 emerging and smaller markets, only four countries saw cuts in the last month, compared to 11 countries over the previous three months, which suggests the pace of easing has slowed. Almost alone among major EM central banks (outside China and Hong Kong), Mexico cut rates again last week (-25bps), after a pause since November, and it is one of the few that may continue its easing cycle. Elsewhere, Romania also cut rates in January (25bps). Azerbaijan and Serbia both cut in December (-25bps). But these are now the exceptions rather than the rule.

Indeed, excluding Turkey (which began tightening in September for its own reasons, and has now raised rates by 875bps since then), we are already seeing tightening commence in a few smaller EM (Armenia +125bps since November, Mozambique +300bps in January, Tajikistan +25bps in February), although we should be careful not to generalise from a few specific situations.

As a result, the average policy rate across EM on our calculations has even edged up by 15bps since its October low, and now stands at around 5.4% (4.6% excluding Argentina and Turkey).

In fact, our measure of CPI inflation in 10 of the biggest EM (excluding China and India) shows inflation has jumped by 170bps since last May to 4%, its highest in nearly two years, despite the economic slack in many of these countries. 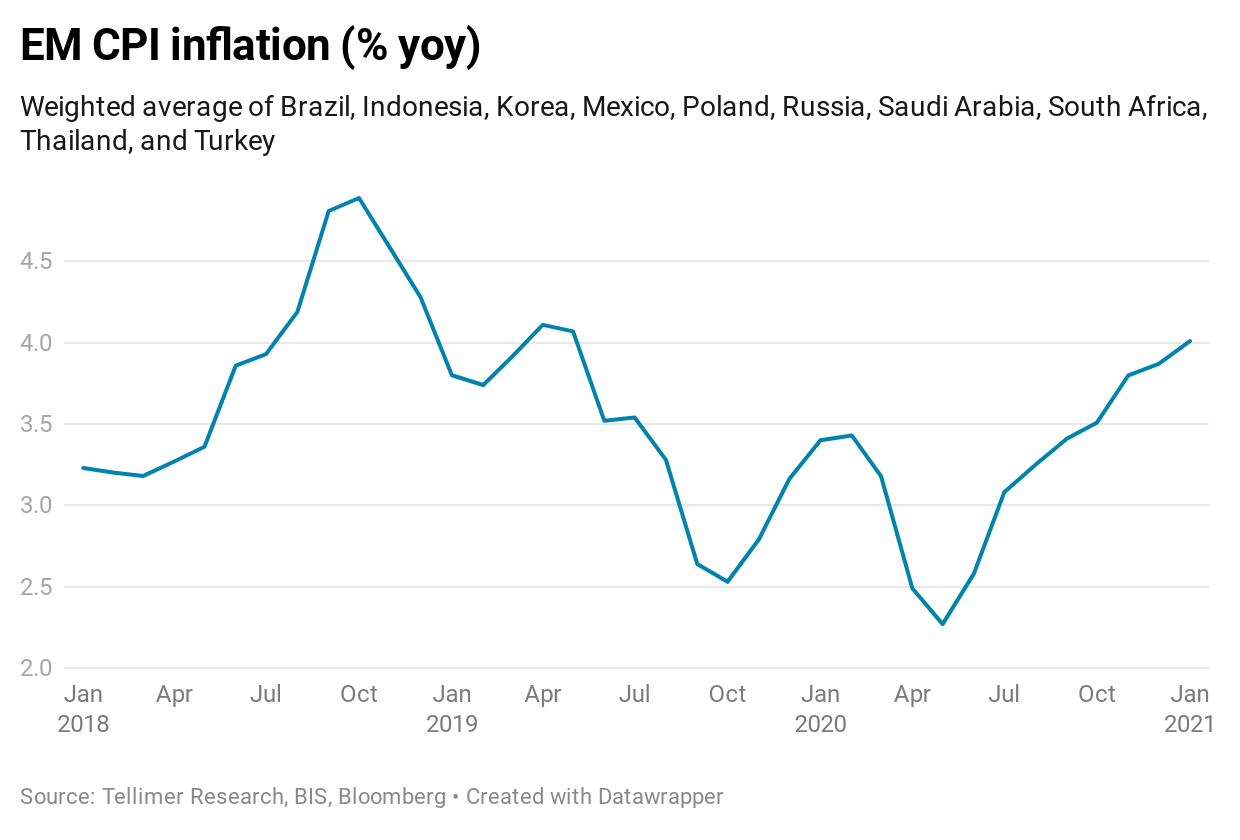 Central banks therefore continue to face a difficult balancing act in light of the pandemic. While most emerging market economies should see a sharp rebound in growth this year, which may prompt a normalisation of monetary policy, the near-term outlook is more uncertain as activity remains depressed amid second and third waves. This will likely hit GDP growth in Q1 and favour maintaining low or negative real interest rates. Those central banks that may have been on hold in expectation of a rebound may therefore be forced to loosen their stance again (eg Egypt and South Africa).

As the IMF have repeatedly warned, authorities need to be wary of withdrawing monetary stimulus too early. The IMF noted in its latest WEO update in January that where debt sustainability is not at risk and where inflation expectations are well anchored, emerging market authorities should maintain monetary and fiscal support.

However, inflation also appears to be picking up across EM, although excess capacity caused by the pandemic should help to limit upward pressures on prices. Higher inflation might reflect two factors. First, in the short term, the rise in food inflation, given food items typically comprise a large weight in CPI baskets in many EM. Food prices rose 10.6% yoy in January, according to the UN FAO series, the highest rate of increase in four years. This might be one reason why EM inflation has diverged from DM inflation. Higher food prices therefore pose an upside risk to overall inflation and inflation expectations, although central banks may choose not to respond to first round effects unless it begins to effect core inflation. 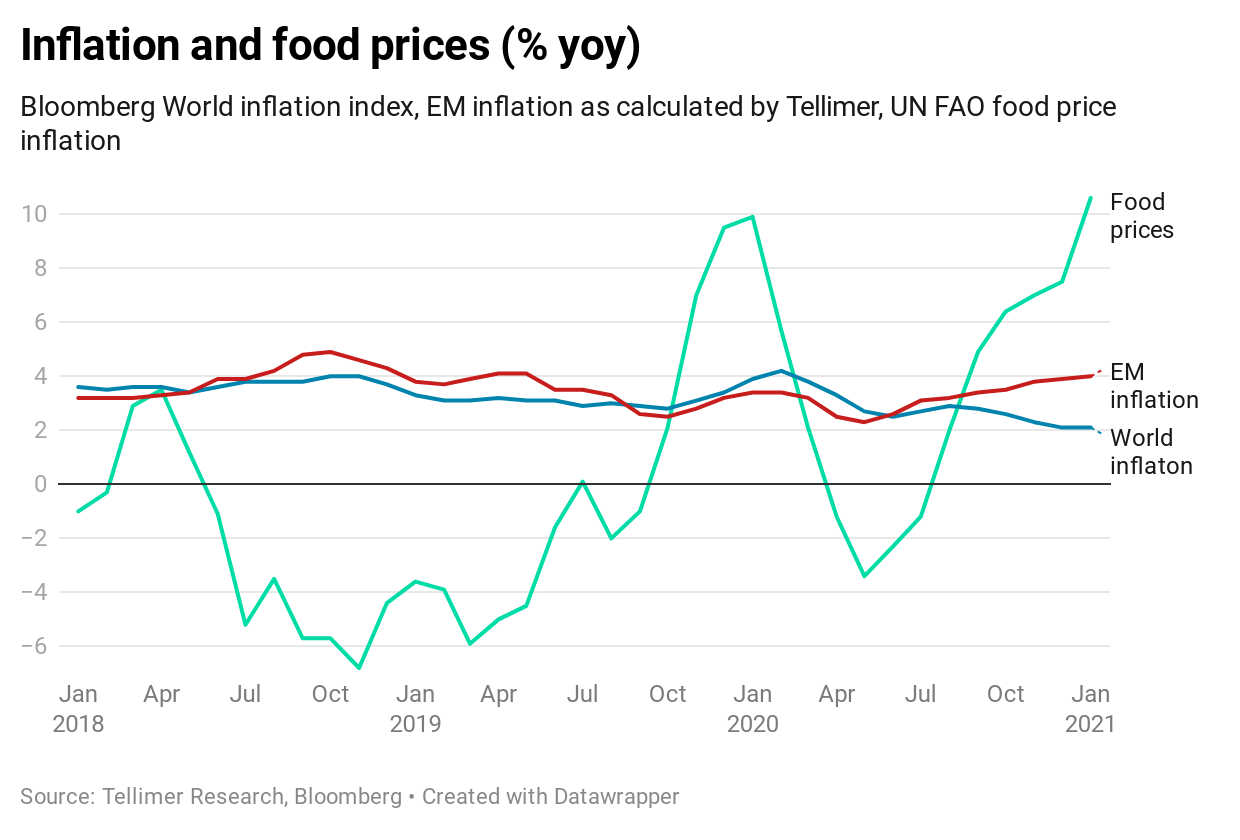 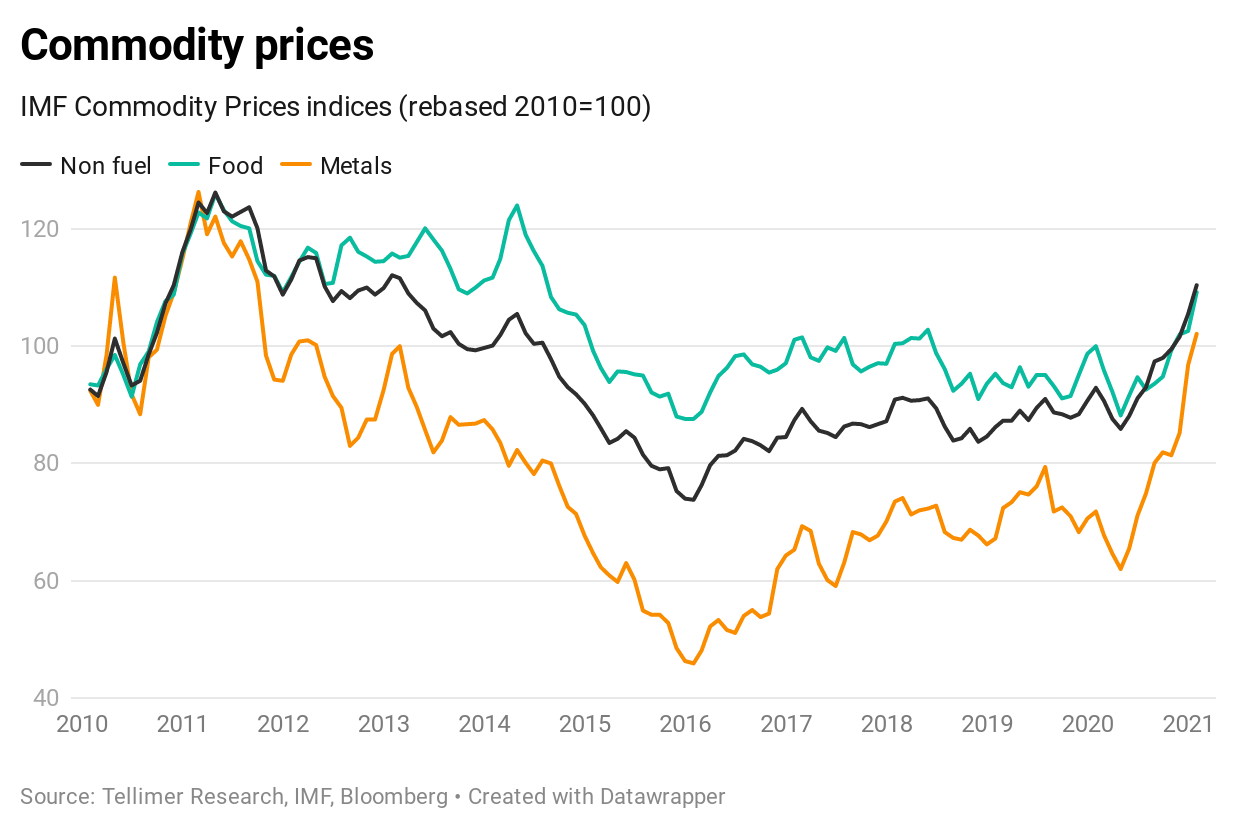 Second, more generally, a deterioration in the medium-term inflation outlook, and inflation pass-through effects from weaker currencies (as individual currencies may not benefit from the strength EM currencies have seen, in aggregate, since October). Positive real interest rates may guard against medium-term inflation risks in some countries, although overly tight monetary conditions may be at the risk of future growth.

Therefore, whilst investor focus is on the maintenance of ultra low interest rates in DM, we might see more divergence in EM monetary policy cycles going forward as central banks begin to tighten at their own pace. Moreover differences in the nature and degree of their commodity dependence will also lead to different monetary responses across countries (eg some commodity exporters may have more monetary flexibility than some commodity importers). 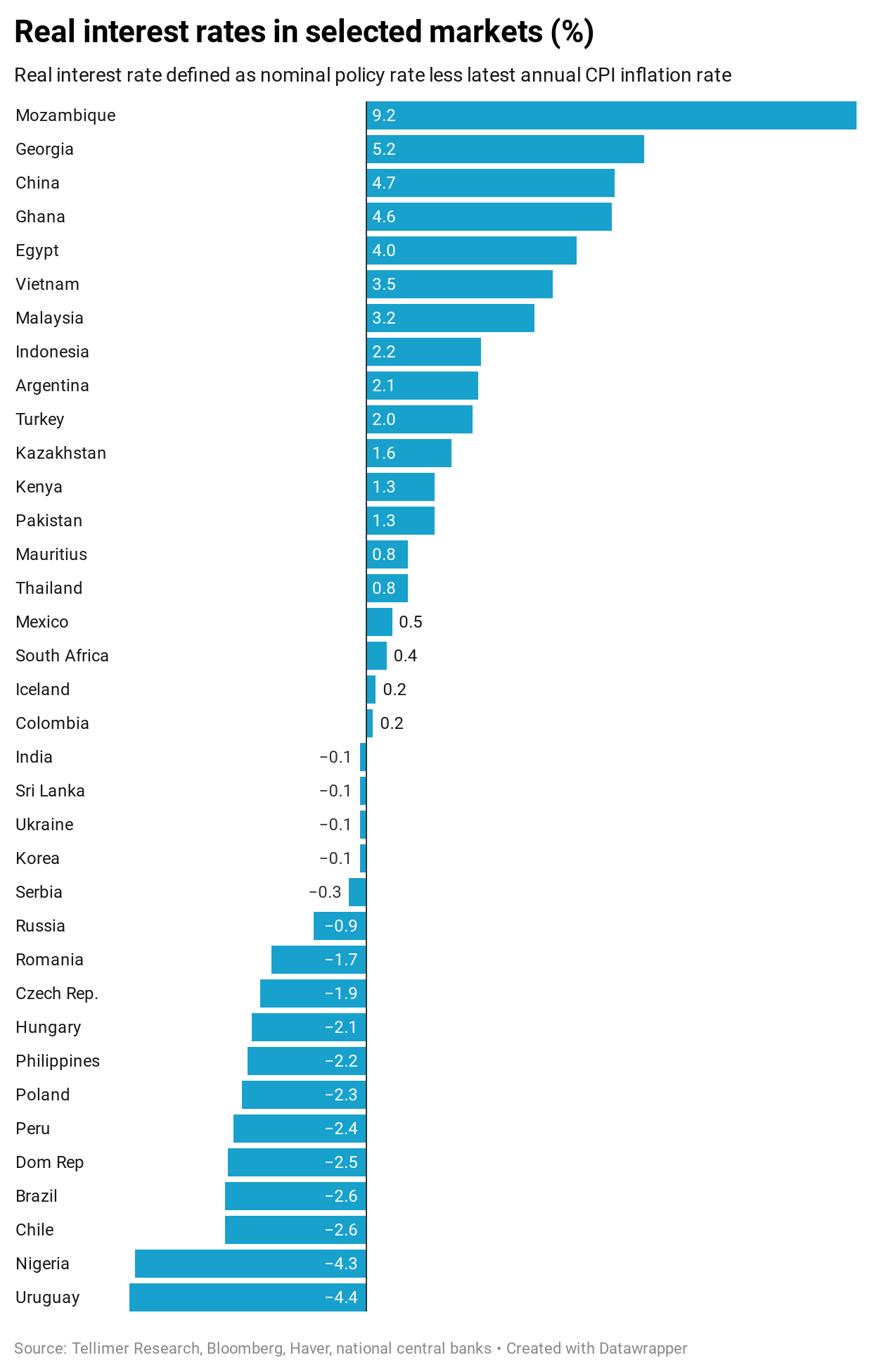