As we have previously highlighted, fiscal stimulus has totalled US$11.7tn (nearly 12% of GDP) globally through 11 September, split almost evenly between on- and off-budget spending. This is projected to push government debt globally from 83% of GDP in 2019 to 98.7% in 2020, rising by 20.2% of GDP in developed markets, 9.6% in emerging markets and 5.5% in low income developing countries (LIDCs). 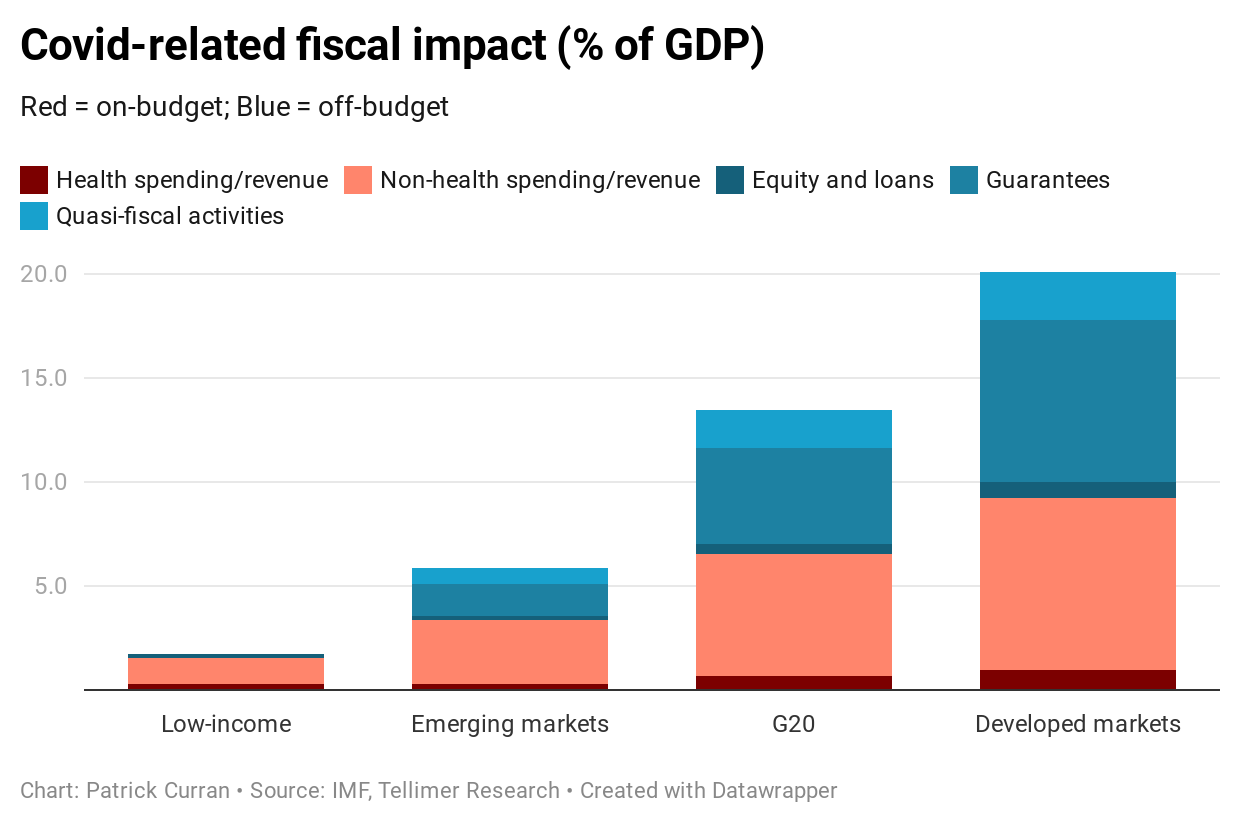 The IMF has urged countries with fiscal space to borrow, projecting a stabilisation of the debt/GDP ratio next year as higher deficits and lower growth are offset by the continued low interest rate environment that we discuss in our 2021 theme, “Yield opportunities in a world of low rates”, improving the growth-interest rate differential. However, not all countries are set to benefit equally, with many EMs entering the year with historically high debt levels and an already stretched capacity to borrow more. 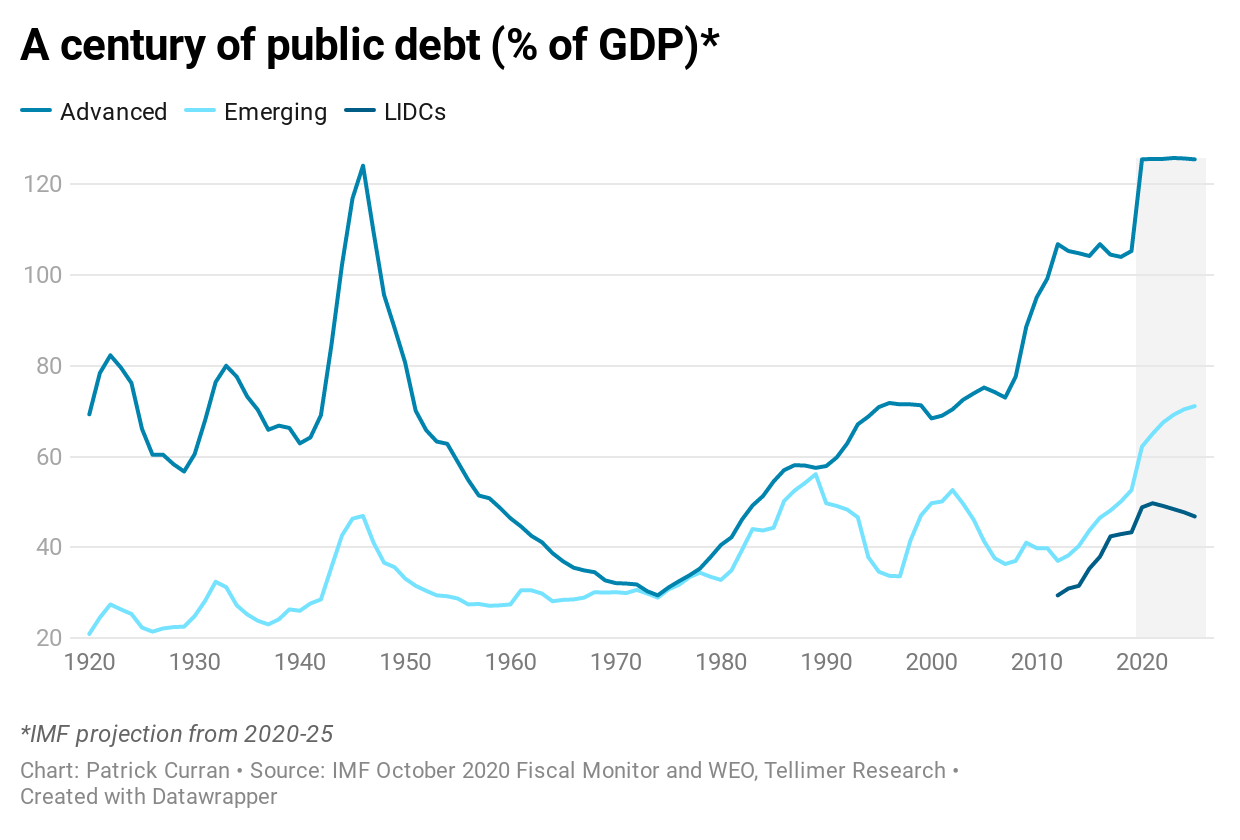 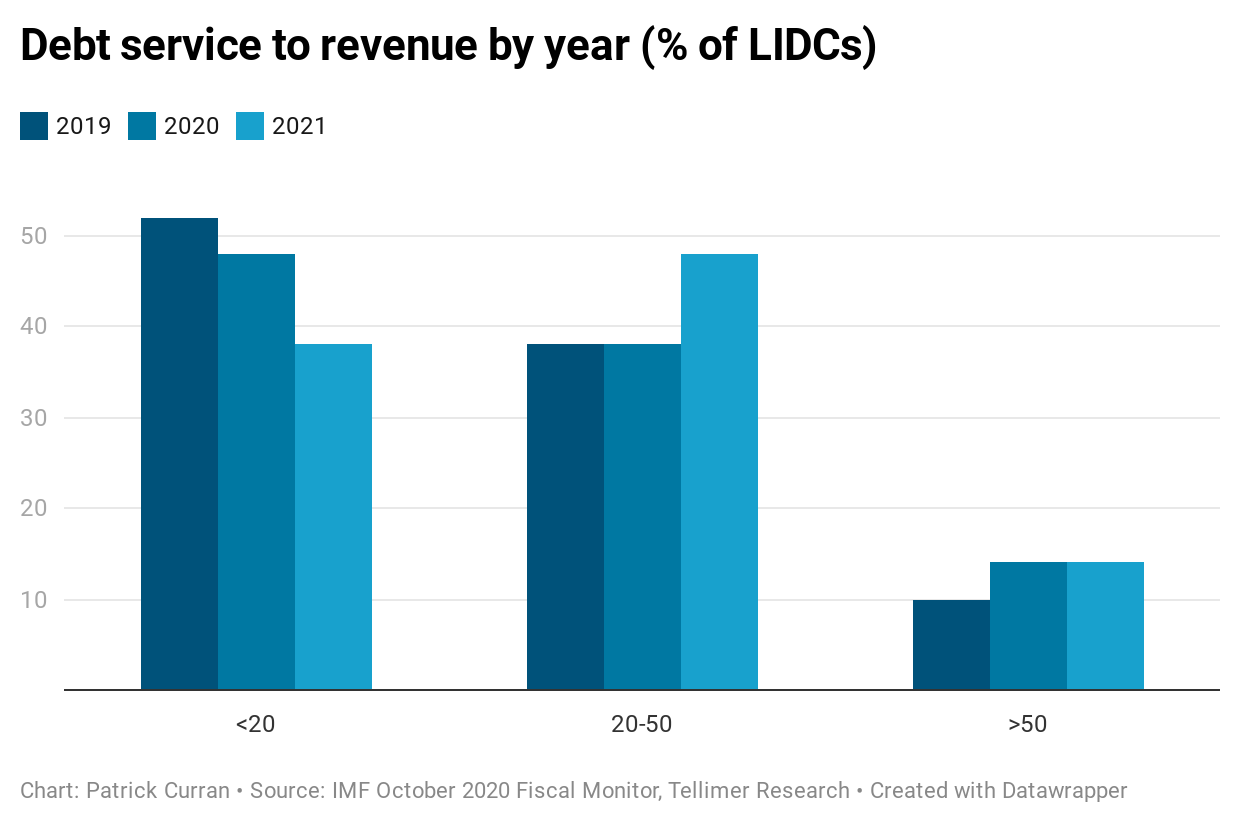 As such, public debt is expected to keep rising for EMs in aggregate from 53% of GDP in 2019 to 62% in 2020 and 71% by 2025. That said, there is likely to be significant divergence across the EM universe, driven both by the size of their pre-Covid budget deficits and debt burdens and the time it is expected to take after the crisis to set debt on a sustainable trajectory (see our 2021 Theme, “Fiscal consolidation, but not yet”).

This will cause a divergence of EM credit spreads as some countries manage to stabilise their debt burdens post-Covid while others inch closer to default. Already, there have been a record six countries with sovereign defaults so far this year (Argentina, Belize, Ecuador, Lebanon, Suriname and Zambia).

Meanwhile, sovereign ratings have come under pressure. Fitch had already downgraded 24 EM sovereigns by mid-October (for a total of 35 downgrades), and another 30 had a negative outlook. At the same time, the number of countries in the EMBI index with credit spreads over 1000bps has risen from five at the beginning of the year to 10 now (albeit down from the post-crisis peak of 21) and the proportion of the EMBI basket with spreads over 500bps has doubled from 22.5% at the beginning of the year to 45% at end-October. 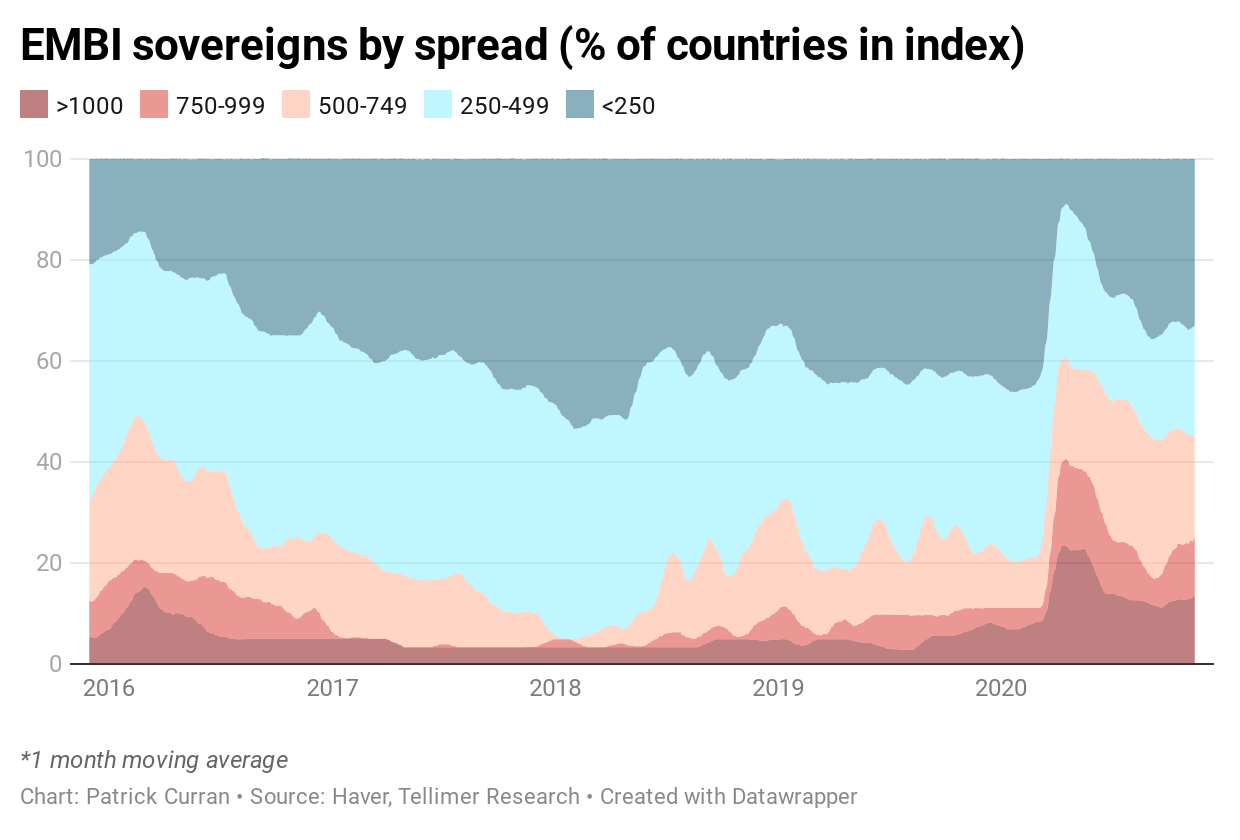 While the EMBI spread is down over 300bps from its post-Covid peak, it is still c70bps wide of its end-19 level. But, within the EMBI index, there has been significant divergence between countries based on credit quality. The spread between B and BB rated credits has increased from 150bps to 260bps, while the spread between BB and BBB rated credits has widened from 95bps to 140bps. 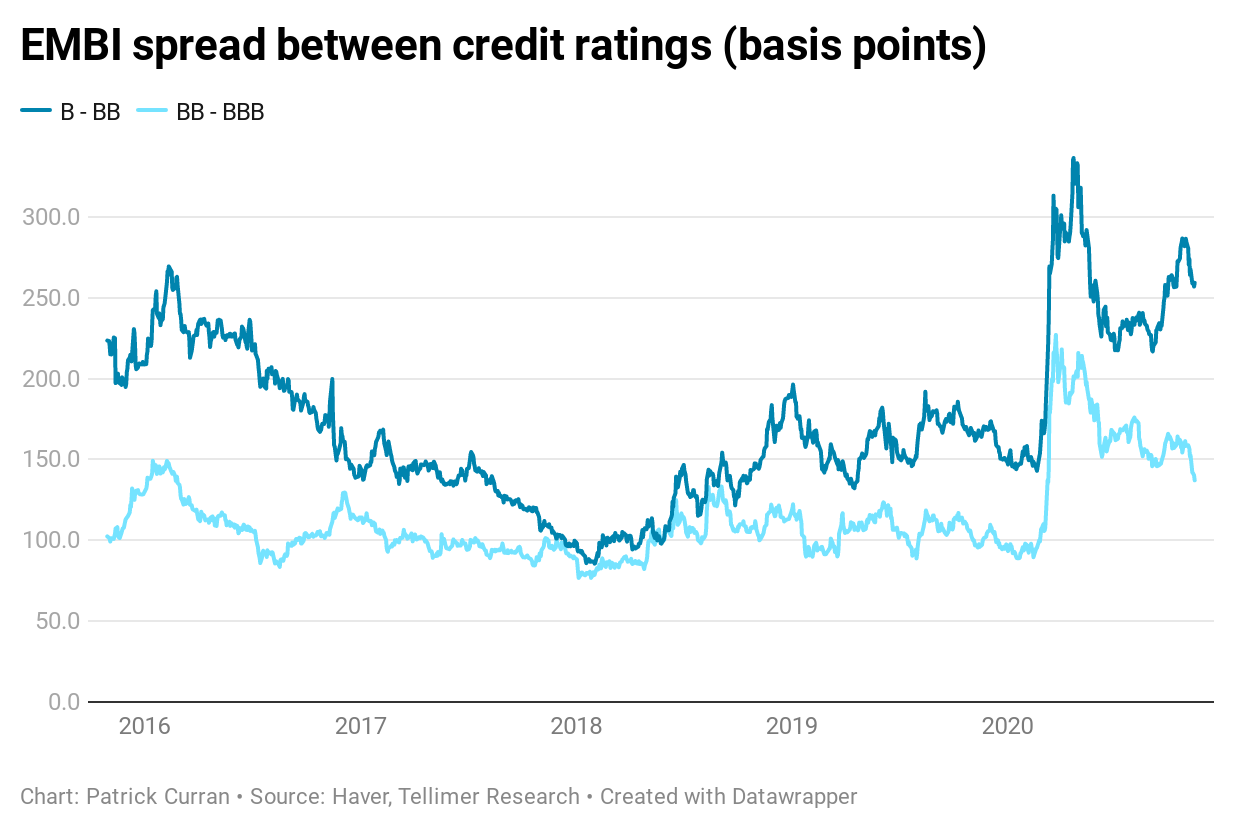 That said, EM capital flows have bounced back. The IIF estimates that portfolio outflows from EMs reached US$90bn in March (US$35bn debt, US$55bn equity), with US$119bn flowing back from April to October (US$81bn debt, US$38bn equity – or US$13bn once China is stripped out). Debt inflows have been supported by robust hard currency sovereign bond issuance (which we estimate at US$166bn ytd, or US$126bn from April to October).

However, this too masks divergent trends across the credit quality spectrum, with high-yield issuers making up only 28% of the total across either time period. This has been dominated by BB-rated credits, with only 10 B-rated sovereigns issuing post-Covid for a total of US$30bn (versus US$58bn across 17 issuers in the same period last year). And, in Sub-Saharan Africa, which has no investment-grade issuers, there has not even been a single eurobond issuance since the Covid crisis began in March.

This suggests that some weaker sovereigns may be locked out of markets (either due to lack of demand or lack of desire to issue at elevated yields), which could make it difficult to roll over external debt as it matures and exacerbates existing external liquidity constraints. In response, the G20 recently extended its debt service suspension initiative (DSSI) through mid-21. In addition, the IMF has provided cUS$100bn of emergency funding to more than 80 countries, and other multilateral development banks have committed US$75bn this year out of $230bn earmarked for the pandemic response.

However, a lack of private and multilateral participation means that only around one-quarter of payments by DSSI participants in 2020 were eligible for suspension, and middle-income countries are ineligible to participate. And, unlike the HIPC initiative of the 1990s and early 2000s, the DSSI deals with liquidity but not solvency issues. The suspended payments will be paid, with interest, over the 2022-25 period, during which DSSI-eligible countries are already scheduled to repay US$115bn.

Given increased debt burdens and a potential lack of market access, these efforts will only delay the inevitable for countries at the verge of debt distress. In response, the G20 and Paris Club have agreed on a new common framework for debt relief – but this will not be a panacea either. Before HIPC, the bulk of EM debt was held by the Paris Club. But, over the past decade, commercial lenders and China have become the dominant creditors, with the ratio of Paris Club debt falling to only 14% for distressed low-income borrowers. 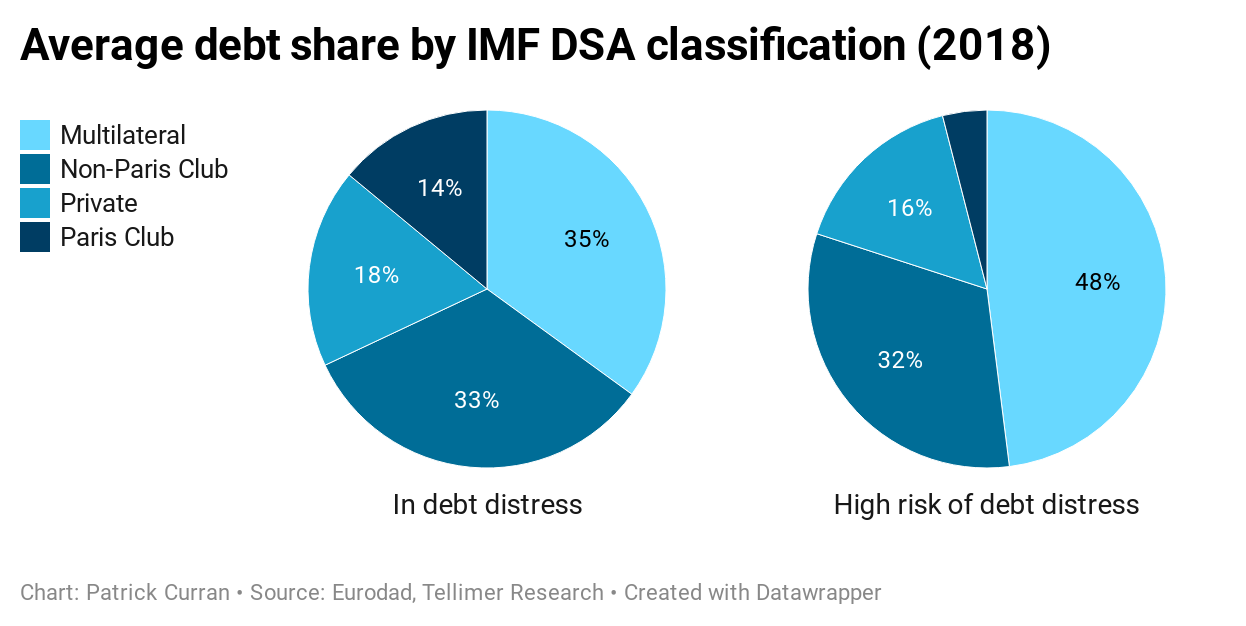 The diversity of creditors, and opacity of Chinese funding, will make sovereign debt restructuring more complicated (with Zambia as a potent illustration). In addition, a review by Eurodad of the contractual terms for 52 series of bond issues of 16 low-income countries shows that at least 29% of the bonds lack the latest generation of Collective Action Clauses (CACs), further complicating the process.

Putting this all together, although we believe that the coming years will present a favourable backdrop for EM as a whole, there will be winners and losers. We are likely to see divergence among EM credits based on their ability (or lack thereof) to deal with the fiscal fallout of Covid and debt restructuring could be a complicated process in many countries.

This will present opportunities for investors who are able to successfully differentiate between credits and/or accurately predict the course of restructuring and its impact on recovery value for countries after they default.