US Treasury yields are also off their highs, and with the 10yr positioned at over 3.0%, there is a lot of tightening priced into the market. The fact that the US yield curve is steepening again is interesting and suggests that the more the stock market corrects, the lower the probability that the Fed will be able to carry out the full extent of the tightening. This suggests that the USD is quite fully priced and no longer obvious rotation play. It is, therefore, a tricky time. While the face-value strategy would be to rotate further into the USD, there are many other factors to consider, and it is a relative game. Relative to how much has already been priced in, not just for the USD but also for other currencies.

Oil markets kicked off the new week under pressure as the European Union has softened its proposals to ban Russian crude, while economic growth concerns persist. Brent fell from over $113 per barrel yesterday to below $105 per barrel and has extended this decline this morning, trading near $104.60 at the time of writing. WTI, meanwhile, is trading near $101.75 per barrel, also well down from last week’s peaks of over $110 per barrel. The EU noted yesterday that it would scrap a proposed ban on EU-owned vessels transporting crude from Russia following objections from members such as Greece. Not only does this soften the proposed package of sanctions, but it creates further delays and keeps the door open for further revisions, which may eventually see the package become less effective.

Angola: In the latest opinion poll ahead of the August elections, the ruling party's lead over the main opposition has narrowed to 7ppts. A poll conducted by Afrobarometer involving 1200 respondents surveyed from February 9 to March 8 showed that the Popular Movement for the Liberation of Angola, or MPLA, which has held power for 47 years, had 29% support, while 22% said they would back the National Union for the Total Independence of Angola or Unita. According to Afrobarometer, almost 50% declined to express a preference, making it impossible to predict the election outcome.

Egypt: Data from the Central Bank of Egypt showed that net reserves rose by $42mn in April to $37.12bn. This followed a $3.91bn drop in March, as the exodus of foreign portfolio investors from the market for Egyptian government paper accelerated. According to the central bank, the increase in reserves in April was primary the reflection of a $258mn rise in the 'foreign currencies' component of reserves. The current levels of reserves equate to roughly five months of import cover, surpassing international indicators of reserves adequacy. The main function of the central bank's reserves is to provide commodities, repay instalments and external debt, and cope with economic crises during exceptional circumstances.

Ethiopia: Inflation in Ethiopia accelerated further in April, coming in at a record high of 36.6% y/y from 34.7% y/y in March. On a month-on-month basis, consumer prices rose by 2.2%. According to the Central Statistics Agency, non-food price inflation rose to 28.1% from 23.5% in March. Food price inflation food inflation fell to 42.9% from 43.4% in March. The CSA data showed that the seasonal effect of celebrating two major religious festivals had underpinned the prices of both non-food and food items in April. That said, inflation in Ethiopia remains robust and suggests that government may have to implement further measures above the current administrative actions to try to control inflationary pressures.

Nigeria: Central bank Governor Godwin Emefiele has asked a federal judge to permit him to retain his post while running for the presidency. According to a lawsuit filed last week, the governor said that he was under no legal obligation to give up the role ahead of the upcoming primary elections to become a presidential candidate. Note that President Buhari has fueled calls for the governor to resign from his position.

Tanzania: Headline inflation in Tanzania accelerated to a 3-month high of 3.8% y/y from 3.6% y/y in the month prior. On a month-on-month basis,  A breakdown of the data showed that food and non-alcoholic beverages inflation in April rose to 6.6% from 6.5% in March. While inflation rose in April, it remains below the central bank's target of 5%, suggesting that the central bank will persist with its accommodative monetary policy stance to support business and investment for the foreseeable future.

Zambia: President Hakainde Hichilema yesterday said that he was pleased China would co-chair a creditor committee during debt negotiations along with France and that a partial write-off of the country's $32bn debt is being considered. The President added that Zambia aims to avoid another debt default and is seeking a reduction in debt as part of the relief package. According to the President, "we borrowed way too much. It is one of our priorities to restructure our debt." Note that Finance Minister Situmbeko Musokotwane has said that Zambia's debt talks should end in June, a timeline considered ambitious by many.

Zimbabwe: Data from the central bank showed that gold output in April rose by 79% y/y to 2,481.4kg. During the first four months of the year, Zimbabwe produced 10,176.8kg of gold, up from 5,400.8kg. Zimbabwe is targeting to produce 40 tons this year, up from 29.6tons in 2021, and increased output is a welcome development given gold, along with other mineral exports, is the biggest source of foreign exchange.

Forex: Kenyan Shilling continues to trade at its weakest level on record as bearish bias persists

The bearish bias in the Kenyan Shilling remains intact, with the KES having recorded its eleventh straight monthly loss against the USD. The KES weakened by 0.70% in April, adding to year-to-date losses of just over 2.50%. The sustained selling pressure has seen the KES drop to its weakest level on record, according to Bloomberg data going back to December 1988. 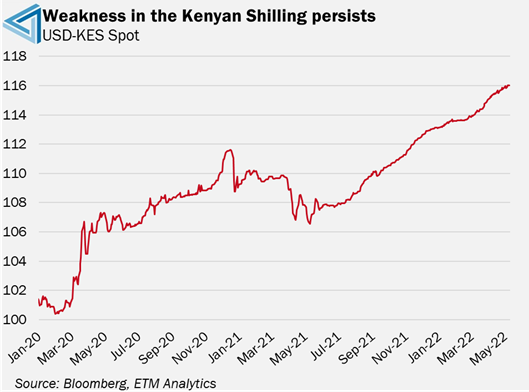 The depreciation in the KES comes despite several bank interventions. The Central Bank of Kenya recently directed commercial banks in the country to ration the sale to manufacturers, importers, and others in need of hard currency. The central bank has also tried to slow the rate of depreciation by using its foreign currency reserves. While reserves edged marginally lower to $8.401mn in the week ending May 6 from $8.427mn a week prior, the broader trend shows that reserves have fallen by around $355mn at the start of the year.

The above-mentioned measures have failed to halt the sell-off in the KES amid a rising import bill. Elevated oil prices have also exerted pressure on the KES, given that Kenya is a net oil importer. Meanwhile, traditional supply sources such as the agricultural sector and diaspora remittances remain flat. This week the KES is expected to weaken further on the back of increased importer dollar demand from various sectors. Beyond that, we expect the bearish bias to persist in the near term with headwinds such as tightening financial conditions, growing fiscal risks, and the August elections, all posing downside risks. From a valuation perspective, the KES remains overvalued on a real effective exchange rate basis, suggesting further room for depreciation exists.

It has been a tumultuous few weeks for risky assets as investors fled risk and sought safe havens due to worries about inflation and slower global economic growth. Investors have shifted their focus from alpha generation to capital preservation and are more concerned with raising cash, given the risk of a further deterioration in market conditions. Markets continue to re-price inflation risks while at the same time becoming more concerned about increasing recession risks. 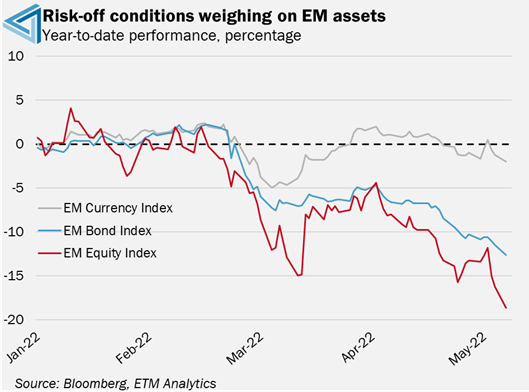 While still significant, the losses in emerging market bonds have been slightly less pronounced this year, with the JP Morgan Government Bond Index shedding 12.6% in 2022. The sell-off in emerging market bonds has primarily been a function of soaring inflation and the hawkish pivot from central banks as they look to rein in inflation expectations, which have surged to unprecedented levels amid the intensification of global supply-side price shocks. Bond curves across the world have bear flattened on the back of the aggressive rate hikes and hawkish forward guidance from central banks.

The losses in emerging market currencies have been modest this year, notwithstanding the resurgent dollar and risk-off conditions. Specifically, the JP Morgan EM Currency Index has fallen by just over 2% on a year-to-date basis. That said, currencies with a high sensitivity to the war in Ukraine have been battered in recent weekly, with Central Eastern Europe currencies down almost 10%. African currencies sensitive to the situation in Ukraine have also been hit hard this year, with the likes of the Ghanaian Cedi and the Egyptian Pound leading the losses. The GHS and EGP have lost 18% and 15%, respectively, since the start of the year. On the other hand, the Nigerian Naira, Rwandan Franc and Mozambican Metical have been relatively resilient this year, with all three currencies trading in the green against the USD in 2022.

The Covid pandemic and, more recently, the war in Ukraine have taken their toll on African countries, particularly those sensitive to tourism and food imports. Mozambique hasn’t been sparred and has felt the adverse impacts of both global crises. That said, there have been some encouraging developments overnight. In its Article IV report, the International Monetary Fund announced that it had approved a new 3-year arrangement under the Extended Credit Facility for Mozambique for $456mn. The Board’s approval allows for an immediate disbursement equivalent to $91mn.

The IMF noted that a moderate recovery is taking place in Mozambique. After a real GDP contraction of -1.2% in 2020, the first in 30 years, growth resumed in 2021 and is now becoming more broad-based. According to the international lender, after initial supply constraints, vaccine rollout intensified in late 2021, with 46% of the population having received at least one shot. The IMF pointed out that the war in Ukraine is pushing up fuel and food prices. Inflation accelerated to 6.7% y/y in March 2022 amid mounting supply-side price shocks and the impact of tropical storms on local food prices. In response to the acceleration in inflation, the Bank of Mozambique raised its policy rate by 200bps in March 2022, ensuring that Mozambique’s real interest rate remains buoyed firmly in positive territory.

In addition to the prudent monetary policy stance, the government is implementing an extensive reform agenda, including strengthening the management of state-owned enterprises and their debts, improving fiscal risk management and debt transparency, and strengthening public financial management and the anti-corruption framework. The reform agenda supported by the program includes further governance reforms, buttressing the anti-money laundering framework, and creating a sovereign wealth fund. Against this backdrop, medium-term growth prospects are positive.