Poland's coal confrontation with the EU fuels talk of Polexit

Natural gas imports from Azerbaijan (which started last week) are a milestone for the EU. While this is good news for the bloc (in general), not all members will be jubilant — Poland among them. Pressure is mounting on the country to move away from coal power, as the EU is pushing hard – but will likely fail – to phase out coal by 2030.

Among the 27 EU members, Poland will be the leading producer of coal power by 2030 despite its National Energy and Climate Plan (NCEP) targets, with at least 56% coal in its energy mix by 2030 (which nevertheless marks a significant drop from the current 74%). If the EU pushes Poland to move faster, it risks fuelling anti-EU sentiment (at least among its politicians and state-controlled media) and increasing talk of a potential exit (Polexit) from the bloc.

A withdrawal from the EU is not on the ruling Law and Justice (PiS) party agenda, but the opposition (led by Civic Platform which ruled between 2007-15) fears the confrontation over coal might lead to even stronger anti-EU rhetoric forcing Poland to choose a path similar to that taken by the Conservative Party in the UK. Recently, Poland joined Hungary to veto (but subsequently agree to) the EU's budget and Covid recovery fund, disagreeing that the money should be conditional on the rule of law being respected.

Other than the rule of law mainly targeting an alleged breach of EU standards in judicial independence, Poland's ruling party differs from the bloc on values such as abortion and protection of LGBTQI rights. PiS's tightening of anti-abortion laws in November last year led to mass protests across Polish towns and cities and used up much of the political capital that it had gained by the narrow victory of its candidate Andrzej Duda, in July's presidential election.

Despite the growing anti-EU (and pro-PiS) propaganda spread through daily newspapers (19 out of 24 are controlled by the state-owned refiner PKN Orlen reaching nearly half of Poland's population), an overwhelming majority of Poles want to stay in the EU. According to a poll conducted by two private news channels in November 2020, 87% of Poles want the country to remain in the bloc while 49% feared that the policies adopted by PiS could lead to an exit.

We're a long way from it yet, but Poland's exit from the EU – if it were to materialise – would come at a significant cost to its economy since Polish exports still have very little demand outside the bloc. According to the latest trade data, 74% of Poland's exports in 2020 were to the EU's single market while 55% of Polish imports came from within the bloc. Foreign investment (from both within and outside the EU), which has contributed massively to the 7% per annum growth in Poland's per capita income since 2004, might look to alternative destinations in the case of Polexit. Lastly, a Poland outside the EU could once again come under Russia's circle of influence and would not go down too well with the Biden administration. 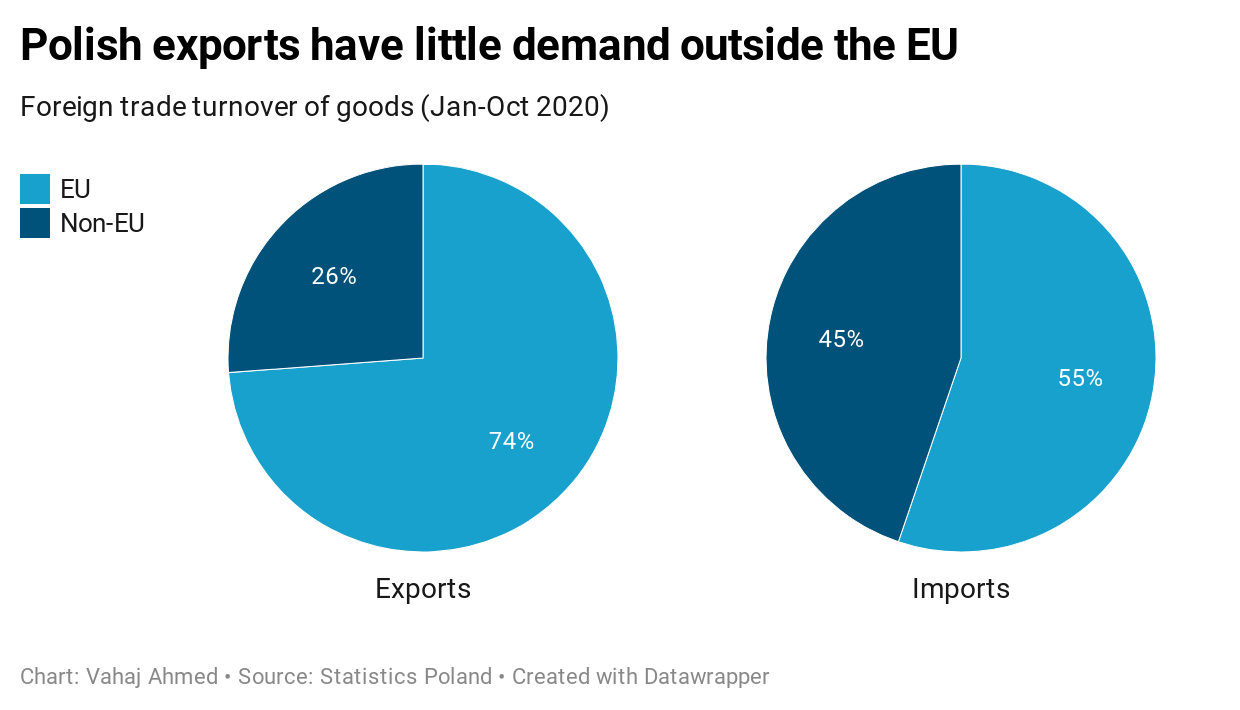 The next general elections in Poland are scheduled to be held not later than November 2023. While PiS (now in its second term) might have the time to push anti-EU sentiment, Warsaw's nationalists will fail to find much international support for it leaving the EU after the departure of the Trump administration, which had little respect for Brussels.

The incoming US-administration under Joe Biden has a more aggressive plan to switch to 100% clean energy by 2035. Assuming that the EU now has a more formidable competitor in clean energy, there is little choice for Poland but to fall in line. As a result, Poland might have to target becoming coal-free by 2040 (current plans show 28% coal in its energy mix by then). This in turn depends on the EU's support to build nuclear power (expected to come online in 2033) and other clean energy technologies. We think the EU has the upper hand in the coal confrontation with Poland.