Data released today by the Central Bank of Sri Lanka (CBSL) shows a sharp drop in reserves in September, falling by nearly US$1bn to US$2.58bn from US$3.54bn in August.

This is critically low, at a mere 1.6 months of trailing goods imports, and compares with a 12-month trailing current account deficit of US$1.65bn and external principal payments of US$5.88bn over the next 12 months. 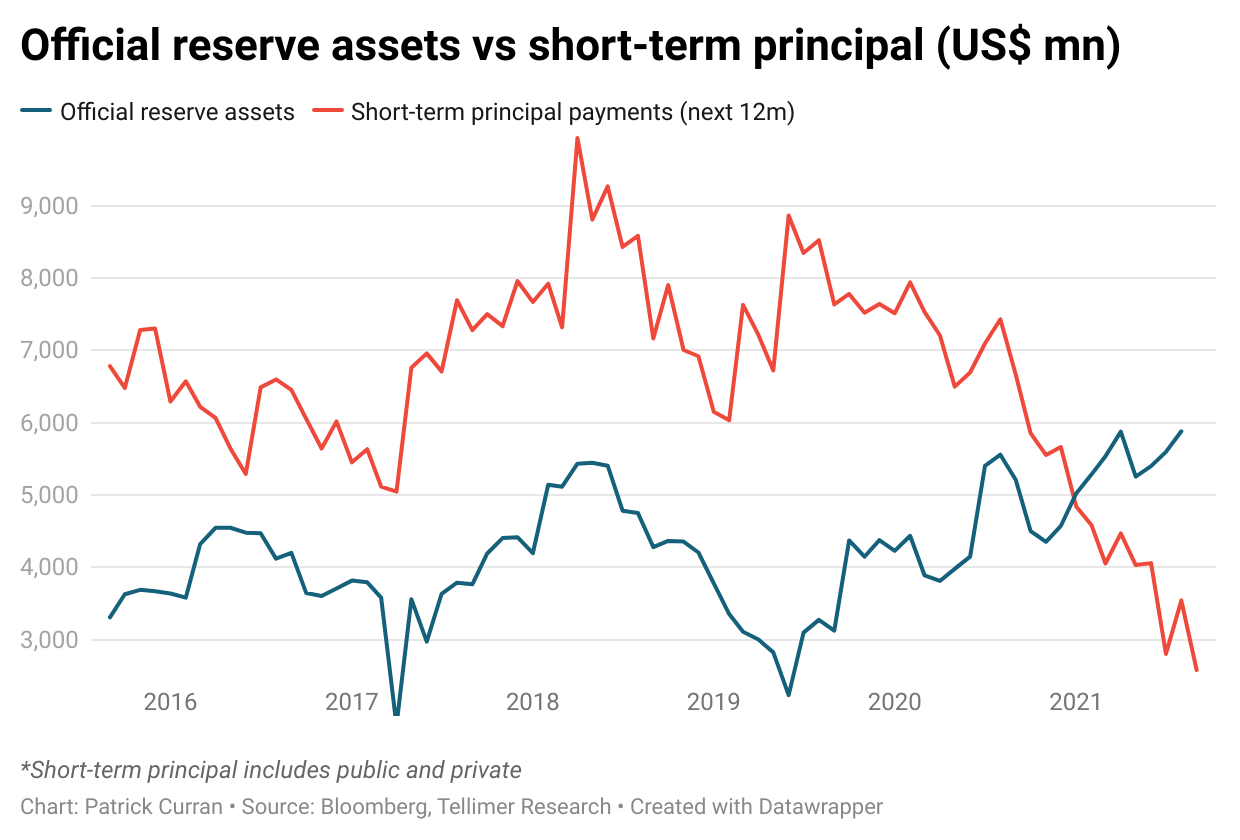 The decline should not come wholly as a surprise, with US$1.2bn of external principal payments due in September (and US$1.4bn of total external debt service). However, after the US$787m SDR allocation boosted reserves in August, the sharp decline in September places reserves at a critical level, highlighting the extent of the crisis and pushing Sri Lanka closer to a balance of payments (BOP) and debt crisis.

We also highlighted newly appointed CBSL Governor Cabraal’s plans to resolve the crisis by gradually removing import controls and yield caps, and sourcing bilateral financing to plug the external funding gap and, potentially, buy back the upcoming January and July 2022 eurobond maturities. Cabraal’s reform plans were formalised in a six-month roadmap for reforms published on 1 October.

Although the promise to remove import controls and yield caps is positive at the margin, the CBSL hopes to offset it via stricter control of FX proceeds by exporters, which will bolster Sri Lanka’s burgeoning grey economy. A gradual approach has also undermined the policy changes, with Treasury bill auctions still undersubscribed at the three auctions since the caps were removed and the ongoing ban on fertiliser imports threatening to decimate Sri Lanka’s crop yields.

In addition, the plan fails to deliver on the key issues, including exchange rate devaluation, lower government spending and a request for an IMF programme. The CBSL’s roadmap simply extends the government’s policy of papering over the widening cracks in Sri Lanka’s BOP, identifying a laundry list of ad hoc and aspirational financing facilities that will only kick the can down the road without more meaningful reforms. 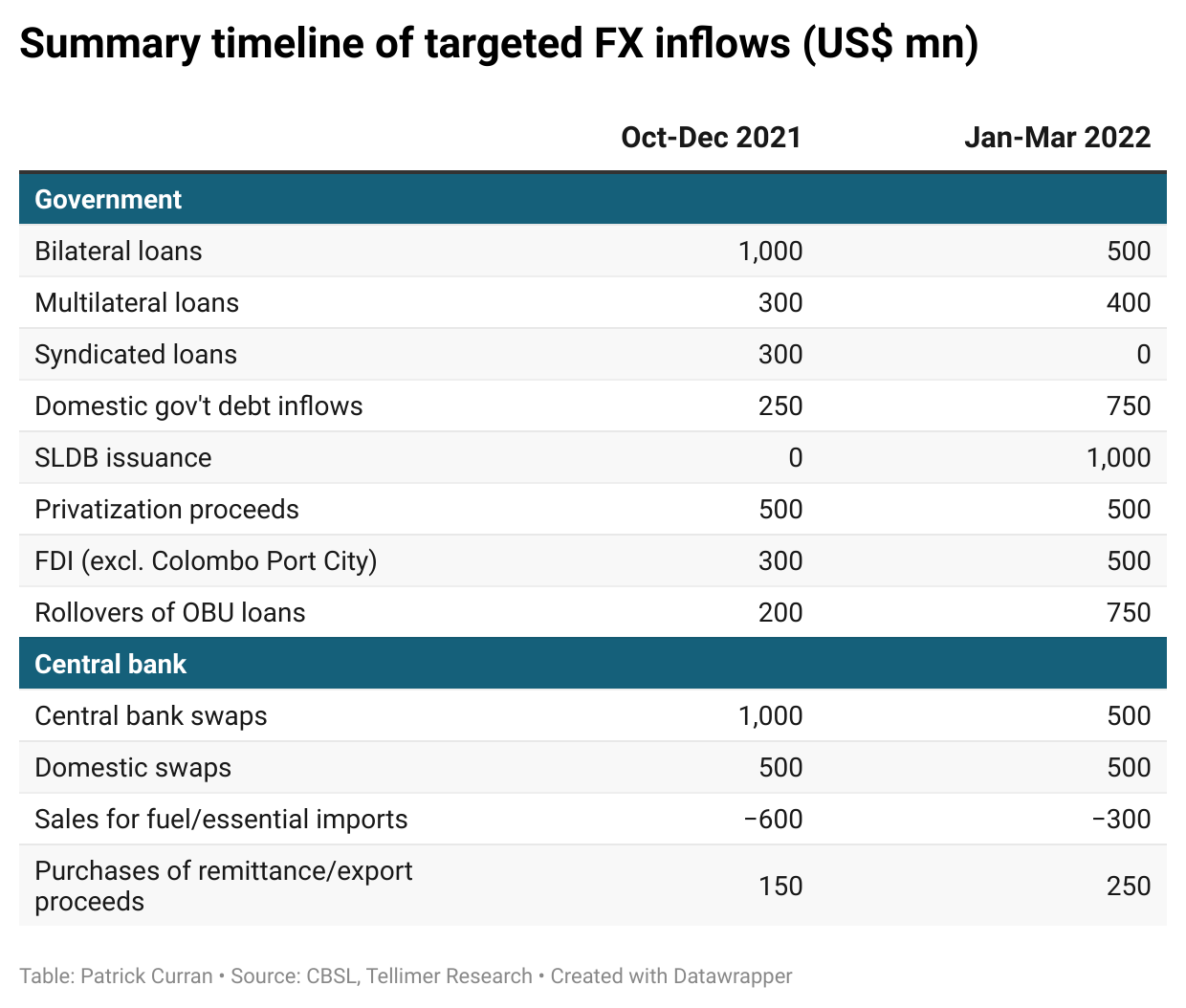 A cursory look at the CBSL’s proposed funding pipeline shows a continued reliance on bilateral funding and swaps (including US$1.5bn of bilateral financing, US$1.5bn of central bank swaps, US$1bn of domestic swaps and US$300mn of syndicated loans, among others), and many of the identified sources are unlikely to materialise in full (including the swaps, plus US$1bn of foreign inflows into domestic government securities, a US$1bn SLDB issuance and US$1bn of privatisation proceeds).

Overall, we view the six-month roadmap as a wholly unsatisfactory response to Sri Lanka’s growing BOP crisis and, without meaningful reforms (including FX devaluation and aggressive fiscal consolidation) backed by an IMF programme and funding (which the government continues to resist), we think Sri Lanka will be unable to stave off a wholesale BOP crisis and default beyond Q1 22.

With just US$350mn of external principal payments due over the next two months, Sri Lanka may be able to use its reserves to buy back its US$500mn eurobond due January 2022 as planned. But, with reserves at just US$2.6bn versus short-term external principal payments of US$5.9bn, Sri Lanka will lack the resources to retire its US$1bn eurobond in July 2022 without a major policy shift.

We maintain our Sell recommendation on Sri Lanka’s eurobond curve beyond the January 2022s, with the SRILAN 6.85% ‘24s approaching our most recent target price of US$60. 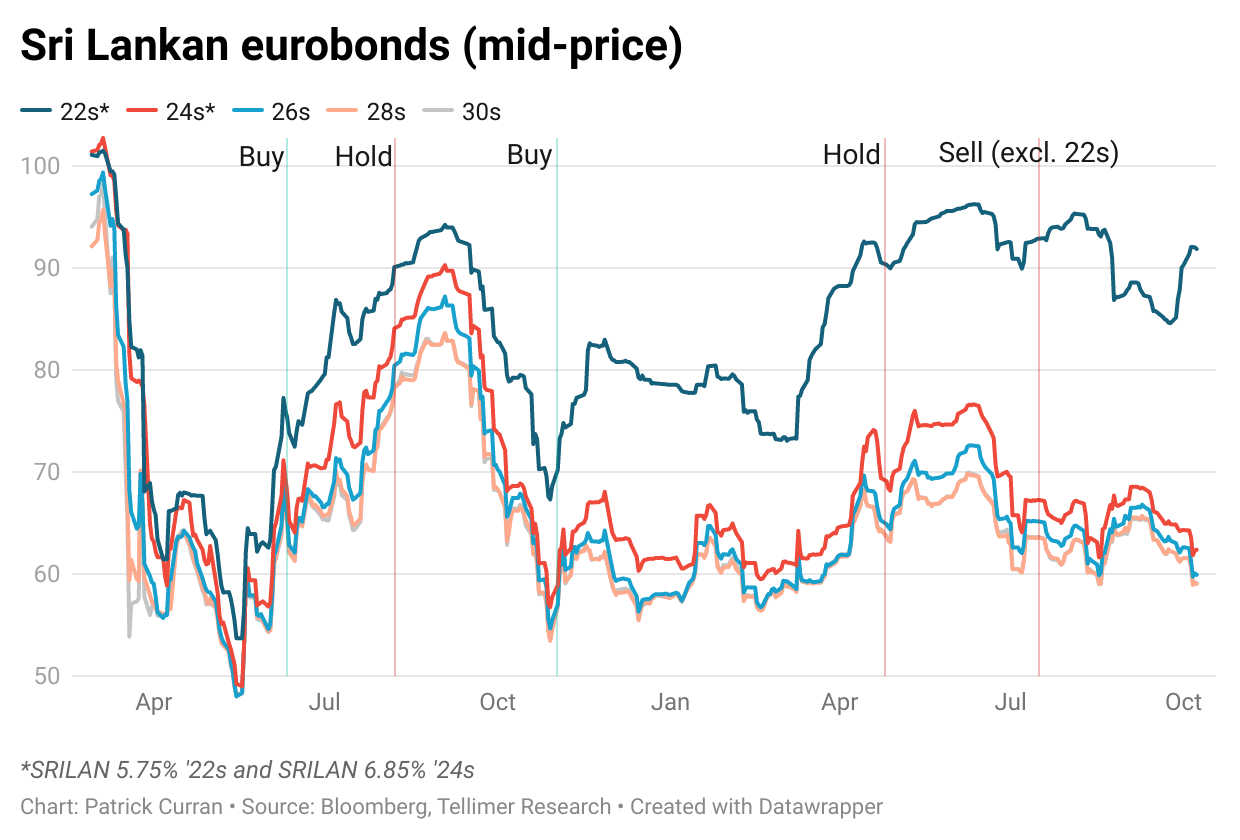