Plan against inflation–Actions to mitigate increases in basic goods’ prices

The Federal Government unveiled its plan against inflation. Today, President Andrés Manuel López Obrador, the Ministry of Finance, and representatives of organizations and businesses of the private sector –including Walmart and Bimbo, among others–, announced a plan against price increases of basic goods. The plan aims to maintain a ‘fair’ price for these goods and is comprised of 16 actions, catalogued in four main lines: (1) Four production measures; (2) six distribution actions; (3) one for foreign trade; and (4) five miscellaneous measures. In addition, a basket of 24 basic products (22 food items and 2 essential goods) was established on which actions from the public and private sector will focus (see table below). Regarding the former sector, the most relevant measures include incentivizing more production, maintaining unchanged transportation costs, strengthening the DICONSA and LICONSA supply program, and a reduction in tariffs and import quotas for most of these goods, as well as other strategic inputs. 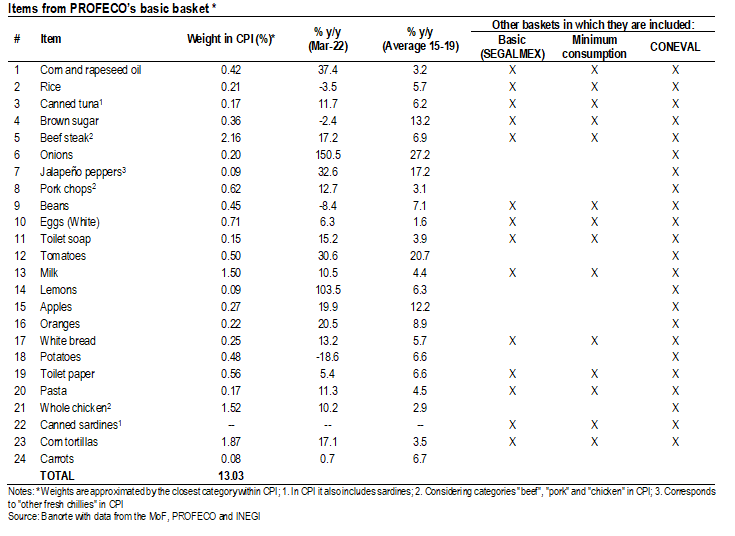 Stabilization of energy prices and increased grain production to support food supply. These proposals fall within the ‘production’ category. First, the government highlighted actions already in place in gasolines –subsidies to excise taxes and extraordinary stimulus– and LP gas –price ceiling–. According to the Federal Government, these will cost around $330 billion this year. In addition, it is estimated that, if not implemented, headline inflation would be close to 10%, a little more than 2.0%-pts above the current level of 7.7% (as of the 1st half of April). The second action aims to increase production of basic grains, highlighting corn, beans, and rice. This could result in 2 additional tons of food, as part of the government programs ‘Producción para el Bienestar’ and ‘Sembrando Vida’, and which are already part of the budget. Third, the distribution of fertilizers will be extended from 5 to 9 states, in addition to a new program to produce organic fertilizers. Fourth and last, but also in the same line, a one-year suspension on compensatory import quotas of ammonium sulfate. According to the On-Line Tariff Information System (SIAVI, in Spanish) from the Ministry of Economy, this good had compensatory quotas from the US and China, although the former was eliminated in 2013. As a reference, the total value of imports of this good in 2018 stood at US$63.0 million. This measure has the goal of reducing the final cost to producers.

Improvements in distribution processes and elimination of customs fees for basic goods. The second group includes six ‘distribution’ measures. Here, the main actions comprise: (1) Improve safety in the country's highways, seeking to reduce theft and decrease the cost of insurance premiums; (2) unchanged fees in highways tolls managed by CAPUFE, with this item representing 0.07% of CPI, although possibly higher in PPI; (3) an exemption of the ‘Carta Porte’ document until October 1st, 2022 –with the possibility of extending it for a longer period– for basic goods and their inputs; (4) a six-month freeze on railways fees and interconnection compensation payments; (5) a reduction in customs authorization times and costs via a more expeditious recognition and an increased volume of operations; and (6) a more agile dispatch of goods in maritime ports with the streamlining of preventive dredging, more personnel and 24-hour operations.

No tariffs on basic products and imports of key inputs for food production. This action looks to reduce total acquisition costs of products and reduce production costs of some basic food items. Specifically, 21 goods and 5 inputs would have their tariff eliminated. Most are either in the basket presented above or necessary inputs to produce them. A relevant case is corn tortillas. Although not explicitly included, both white corn and corn flour are considered. Using trade data from the ITC on 2018 flows, the total amount of goods that could benefit stood around US$6.8 billion, representing almost 16% of non-oil consumer goods imports in said year. Although prices and the total amounts have changed on the back of strong inflationary pressures globally, we believe this exercise is relevant to measure their relative importance. In this backdrop, and as can be seen in the table below, some of the most important goods include pork, beef, wheat, milk, and chicken, which also have a high weight within the CPI.

Other actions also on basic goods, with private sector involvement. In this section, five more points were included, with some actions already carried out currently. These are: (1) The creation of a strategic corn reserve that can be used in emergency situations, remaining under the management of the Mexican Food Security Institute; (2) the continuation of the guaranteed prices program for corn, beans, rice, and milk for small producers; (3) strengthening the supply program of LICONSA and DICONSA, allowing for the delivery of goods to low-income households; (4) private sector involvement, with some actions already agreed, such as the commitment of retailers to foster the price stability of the above mentioned goods (e.g. Bimbo’s bread loaf price frozen for the next six months); (5) Telcel and Telmex’s commitment not to increase prices of phone and internet services for the rest of the year. Regarding point (4), many of the actions are slated for the next six months. Nevertheless, we do not rule out more companies joining and/or a longer application period. 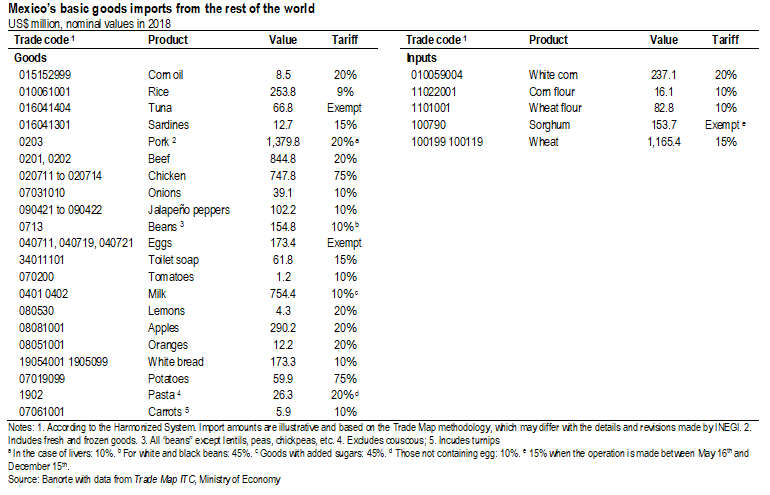 We consider that these measures are positive, although likely with a limited effect on inflation in the short-term. In our view, the focus of the measures outlined is quite suitable considering the nature of the shocks that dominate current inflation dynamics. We believe that, in the case of Mexico, the most important effect has been higher input prices and a scarcity of final goods, affecting supply. In addition, conditions appear to have deteriorated further at the margin with the beginning of the conflict in Ukraine and pandemic lockdowns in China. These actions, focused on influencing aggregate supply (both quantities and prices), will complement those from the central bank, which seek to influence aggregate demand. However, we recognize that it is usually more difficult to impact the former, especially in the short-term. This is due to limitations stemming from the lack of inputs, the need to increase installed capacity and the labor supply. However, we think that tariff measures could have a faster effect on prices. All in all, its effect on 2022 inflation will probably be limited, so we maintain our year-end estimate at 6.7% y/y. Among the reasons, we highlight: (1) The six-month duration of the program coupled with the time needed to reconfigure supply chains in order to have a sustainable impact on prices; (2) the persistence of shocks on global commodity prices (including food and energy), without ruling out additional upside pressures; and (3) global logistics issues creating more bottlenecks that are difficult to solve without closer international coordination.