Philippines: US to China rebalance continues, not cause for alarm

With the termination of the Visiting Forces Agreement with the US, the Philippines continues to rebalance its geopolitical relations with the US and China. This may make foreign investors uncomfortable. This rebalance, however, is unavoidable for most countries in the region and is not necessarily negative. And, in any case, the treaties underpinning US-Philippines military cooperation remain in place. We worry more about potential revisions to government contracts with listed companies than the country’s geopolitical risk. Relative to history, Philippines equities are cheap and its FX rate is close to fair value.

Downgrade of (not an end to) military cooperation with the US

President Duterte’s notice (on 11 February) to terminate the Visiting Forces Agreement (the VFA, signed in 1999, effectively allows the US military personnel unfettered access to the Philippines) does not end military cooperation but it downgrades it (e.g. we understand the 1951 Mutual Defence Treaty and the 2014 Enhanced Defence Cooperation Agreement both remain in place).

The termination of the VFA follows closer cooperation with China on offshore oil and gas exploration.

During the six-month notice period, there may be opportunity for renegotiation (or other concessions such as reversing the January US visa cancellation for Duterte’s political ally, Senator Dela Rosa who initially led his brutal anti-drugs campaign). Furthermore, Duterte’s rhetoric on the US has previously proved more hostile than his ultimate actions.

Risk for Duterte’s relations with his own military

While the immediate economic consequences are limited, foreign investors used to looking at the Philippines under the umbrella of US security may attach greater country risk in the medium-term. Furthermore, closer relations with China in general and the cancellation of the VFA specifically risk opposition to Duterte from the Philippines military and may compromise counter-terror efforts.

Tightrope of US-China relations walked by most in the region

Ultimately, we regard the rebalancing of relations with the US and China as appropriate and inevitable. The opportunities and pitfalls of engagement with China are not so different from those with the US. It is also a rebalancing that has been underway across much of south (ex-India) and southeast Asia (ex-Vietnam) for years now.

We regard this rebalancing as inevitable because of China’s increasing importance as a regional trade partner and its more aggressive territorial claims, as well as the less willingness of the US to commit military forces to protect its long-standing allies (e.g. the US has not deterred China’s expanded military presence in the region) and the greater use by the US of trade protectionism as a tool in foreign relations even with its allies (eg India).

The Philippines MSCI equity index is up 5% year to date and down 2% over the past year in US$ total return terms. Trailing PB and PE are both on a c20% discount to the 5-year median. The FX rate is 10% overvalued on an absolute basis according to REER, but on par with the last 10-year median.

Overall, we see value in Philippines equities, but until there is clarity on potential renegotiations of government contracts with some of the largest listed companies, a catalyst is lacking (absent a region-wide rally on US-China trade or coronavirus concerns dissipating). 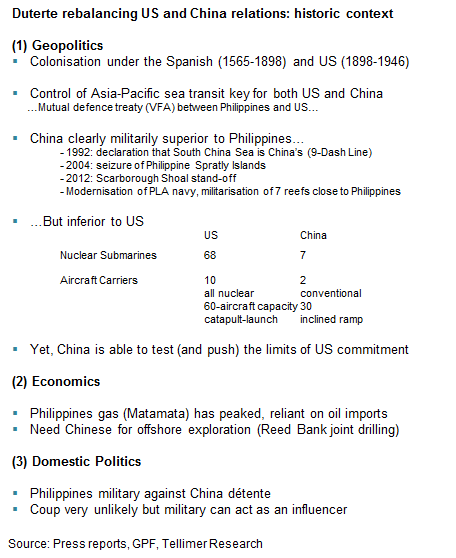 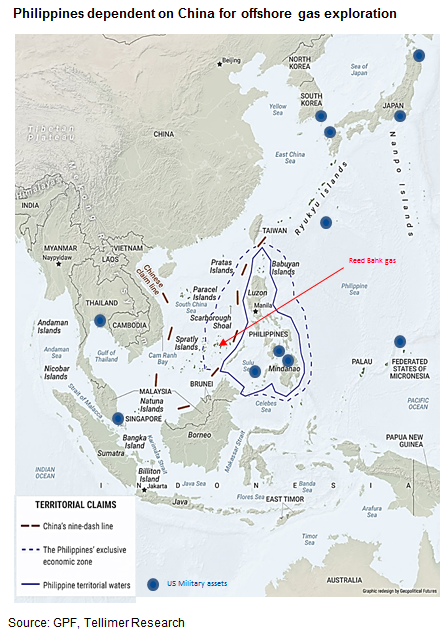